“You’re the first citizen of a brand new Gotham. One made from the best of him and the best of me. Doesn’t that sound wonderful?”

The Batman Who Laughs has been wreaking havoc on the DC Universe for a few months now. Now, in the pages of The Batman Who Laughs #1 James Tynion IV reveals the origins of this horrendous creature. The vile nature behind this dichotomous existence is simple, an awful mix of Batman and Joker. However, the story is a fairly straightforward one. This is one of the more unimaginative of the Dark Nights: Metal tie-ins. Scott Snyder, the mastermind of the entire Dark Nights: Metal series, said this was the “darkest Batman story” he’s been involved with. That’s true, but the violence doesn’t mask the plain story about an infected Batman.

Riley Rossmo is a gifted artist. His unique touch is perfectly matched with the colors of Ivan Plascencia. Even though some of DC’s greatest artist have brought the Batman Who Laughs to life, Rossmo gives them all a run for their money. His brilliant hand creates a lively world that’s as terrifying as it is beautiful. 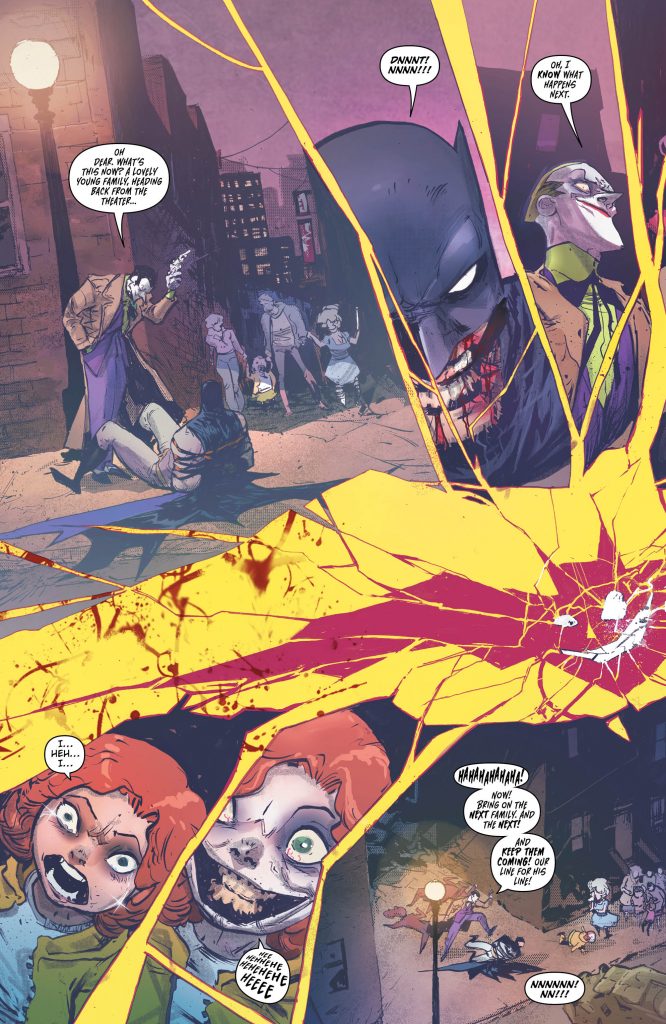 “Oh, I know what happens next.”

These most Darkest of Knights have had interesting origins so far. There have been plenty of tie-ins to go around. Now, the most interesting of the Knights gets his own tie-in thanks to the words of James Tynion IV. There were plenty of twists and turns to take with the character. How would this abominable creature be born? Would a Batman really believe fusing with a Joker could be a good thing? Would a Joker think that? Is this a Batman or a Joker from a previous story?

Well, the answer to all of those questions is a resounding no.

Instead, this is a fairly simple Batman story that reads like an extreme episode of Batman: The Animated Series. There are no twists and turns, just another origin story like the other Dark Knights one-shots. 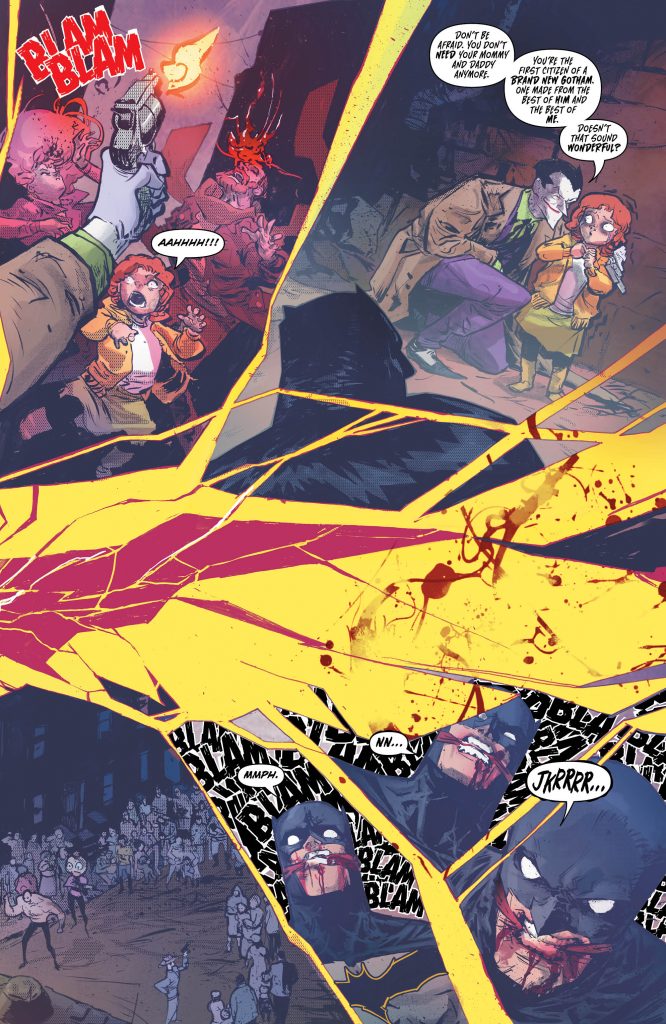 The mayhem in The Batman Who Laughs  is horrifically beautiful. Riley Rossmo’s work on Rasputin and Hellblazer is notable for channeling the magic from the writer’s scripts with ease. Rossmo’s work on Batman can be just as mystifying. The tragedy on display is sometimes difficult to read but impossible to look away from. The art perfectly captures the craziness and downward spiral of this world’s Bruce Wayne.

Ivan Plascencia’s colors are a wonderful compliment to the panels and pages. The saturated, pastel looks gives an antiquated touch to Rossmo’s work. It feels like a classic comic page with art that could have come straight from the 80’s or 90’s.

Dark Nights: Metal continues to dismantle the entire DC Universe. The work by Scott Snyder has been realized by many writers and artists thanks to the many tie-ins connected to the event. Unlike other events of this nature, the tie-ins have been creative and an effective way to make use of the new characters. The Batman Who Laughs #1 is no different. It’s an entertaining homage to an Elseworlds story that was never written. What if the Batman were somehow infected by his worst enemy. It’s interesting to say the least. But it does little to explore the Batman half of the equation.

The best hero on Earth is quickly made into one of the worst things ever to inhabit the Universe, with nothing more than “a little push.” Tynion’s story may be simple but it’s entertaining, and realized in gory, glorious greatness by the art of Riley Rossmo and the colors of Ivan Plascencia.