Mike “Bloody Red Baron” Baron is teaming up with Barry McClain Jr. for a brand new high-flying action and spy thriller, Q-Ball. You might remember Mike Baron as the prolific writer who adapted Timothy Zahn’s fantastic Star Wars: The Thrawn Trilogy for Dark Horse Comics. He’s also written a number of Punisher stories as well as creating his own series Nexus and Badger. Mike has a brand new project in the works which he just successfully KickStarted called Q-Ball. We got to sit down and chat with him about the upcoming series as well as discuss his thoughts on the comic book industry. 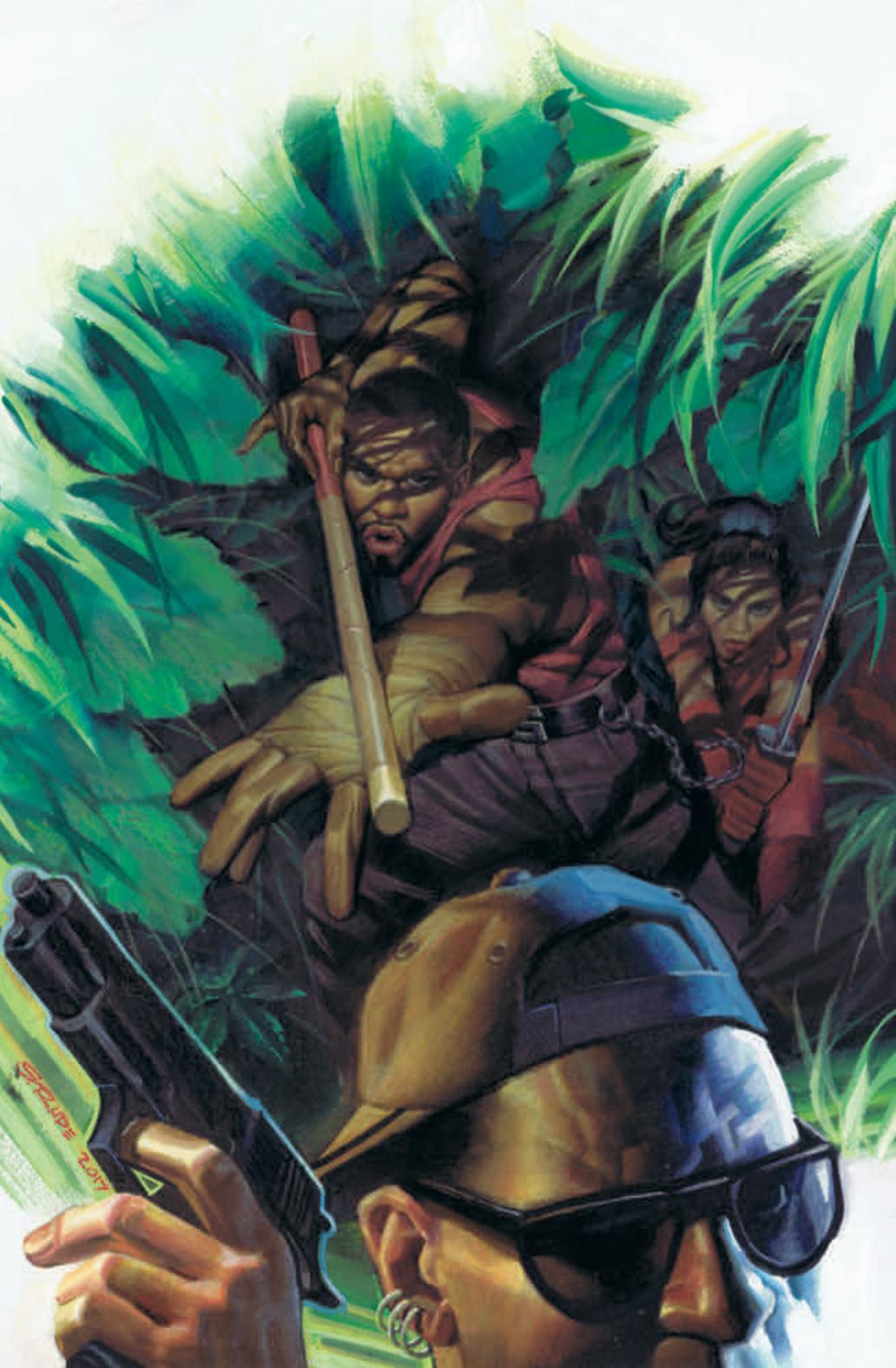 BIC: You recently successfully funded Q-Ball on Kickstarter. You were aiming for $6,000 and brought in $6,449 from 185 backers. That’s super impressive! What made you want to take Q-Ball to KickStarter?

Mike: Because we could. Barry is a most unusual artist. Not only is he good, he’s fast. He’s the hardest-working penciler in comics. He’s like Jack Kirby. It’s pretty hard to get your independent title picked up unless you go with Image. The last three pitches I sent to Image, I never received a reply. We had the talent. Everyone was willing to do it. All we needed, really, was publishing money plus nugatory emoluments.

BIC: Do you think there is a reason why you never heard back from Image?

Mike: I have no idea. Next time I pitch, I’ll have someone run interference.

BIC: I really like the background of the main character, Curtis Ball – he’s a Merchant Marine from Detroit who is now managing a warehouse in Manila. Who influenced you when you were imagining this character? How did you think him up?

Mike: Y’know, John, I’m not really sure where Q-Ball originated. I like the name. Sometimes I just start with a name. I wanted to do a martial arts comic with real martial arts. I was never happy with the kung fu in Master of Kung Fu. There wasn’t any. Most mainstream artists’ idea of martial arts is Hulk swinging a fist and five guys flying face first out of the panel. There are exceptions. Anything Jeff Johnson draws. Jeff’s a martial artist. So is Val Mayerik. And while Barry isn’t, he’s close enough that we can get together and go through the moves. As story elements coalesced, I focused on kali/escrima and other Filipino martial arts. I trained with John Fehling. That was an influence. I liked the idea he was a pool hustler. Curtis is an honest man. He doesn’t hustle for a living. But he knows how to play pool. 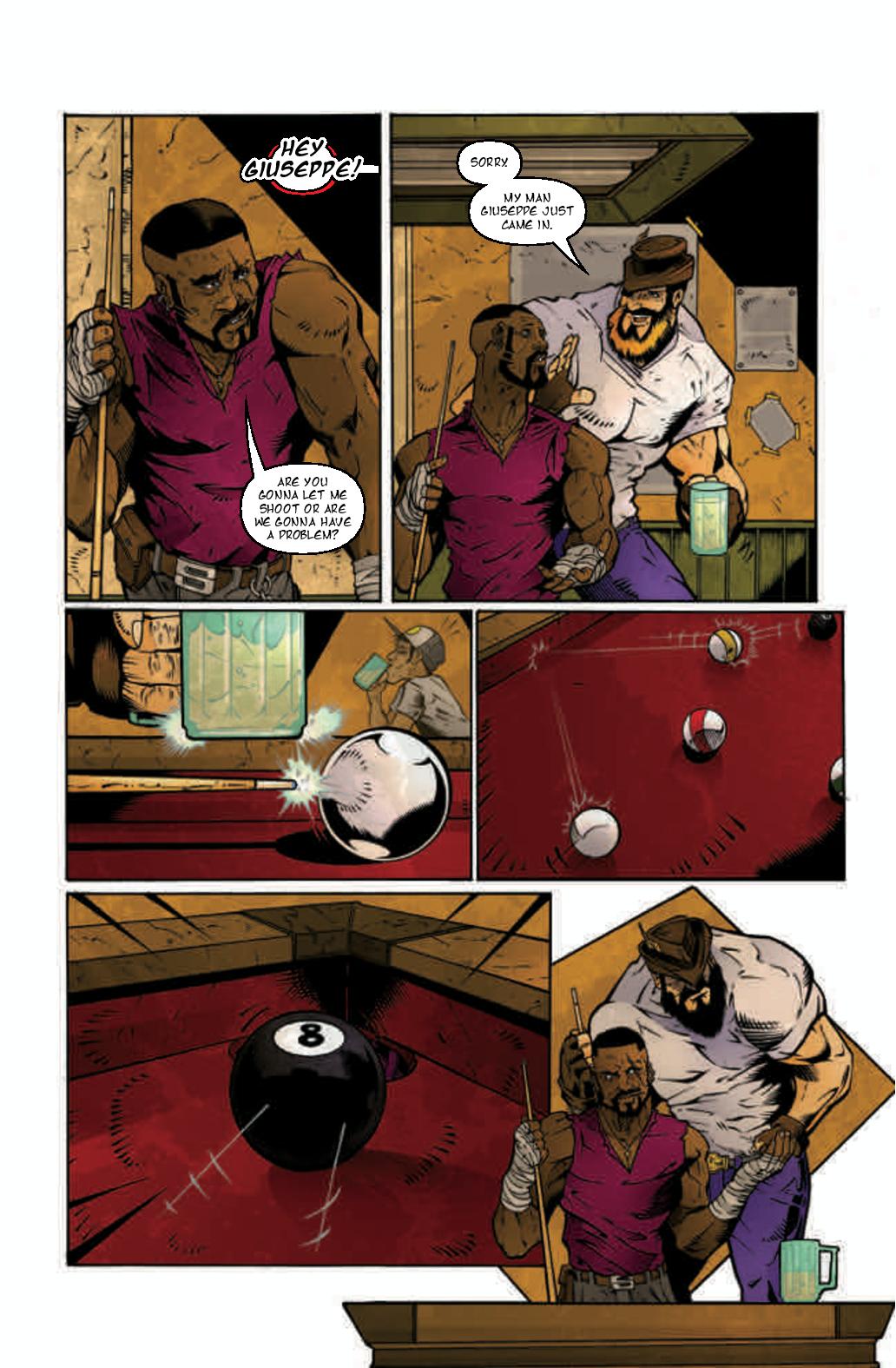 BIC: What other kind of martial arts styles will we see aside from Kali and Escrima which are Curtis’ passions?

BIC: Curtis isn’t the only interesting character. You also introduce Donna Wing – a Chinese blogger who is being hunted by the communist government for exposing their humans rights abuses. Who did you model her after?

Mike: Howard Hawks’ women. Lauren Bacall in To Have And Have Not. Rosalind Russell in His Girl Friday. Tough dames who’ve been around the block and can go head to head with men. Angelina Jolie in Salt. Michelle Yeoh.

BIC: Given that Donna Wing is being hunted by the communist Chinese – can we expect the story to have some political undertones? Why did you choose the Chinese government as one of the primary villains? We hardly ever see them as villains in mainstream comics nowadays.

Mike: It’s just a fiction, meant to entertain. But the more wholly the audience can enter into the story, the greater the entertainment. Chinese human rights abuses are legion and horrendous. I’m not singling them out. Many countries have atrocious human rights records. But this, combined with a rumor, that the Chinese harvest human organs from political prisoners and children to sell internationally, sounded like a strong plot. There’s also the diplomatic angle. If the U.S. knew about these abuses, how could we go on with business as usual? Perhaps some factions of our govt. are at odds with other factions. There are secrets within secrets. 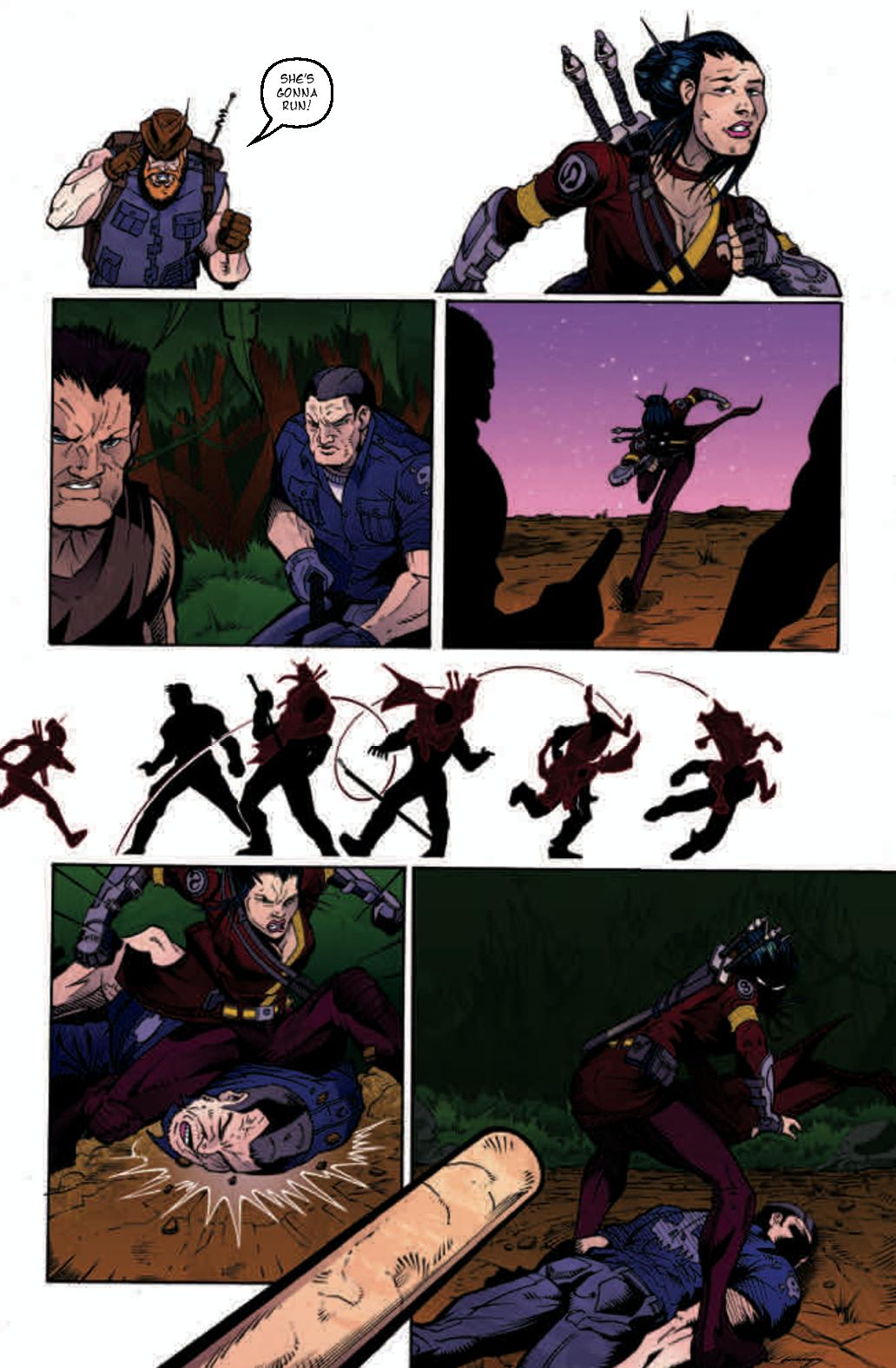 BIC: You’ve already got the first issue completed. How many issues do you have planned out?

BIC: Do you plan to do any more issues after four or five?

Mike: Depends on what kind of reaction we get.

BIC: About three years ago you released your first novel, Biker, how did the experience of writing the novel influence your comic book work?

Mike: It didn’t! I’ve been writing comics all my life, but it wasn’t until ten years ago I started writing novels. It’s a whole new ball game, baby. I’m working on my seventh Josh Pratt novel.

BIC: Seventh novel are the other six already available? What or who is Josh Pratt?

Mike: Josh Pratt is the protagonist of Biker. Liberty Island will release six Josh Pratt novels this year, two at a time, beginning shortly. As soon as I get the schedule I’ll let you know. The series is called BAD ROAD RISING cuz a series has to have a handle. Josh Pratt is a reformed motorcycle hoodlum who found God in prison, was pardoned, works as a private investigator. Many of the stories are about bikers and gangs, others are not. They are grim, my friend. But shot through with sly humor. 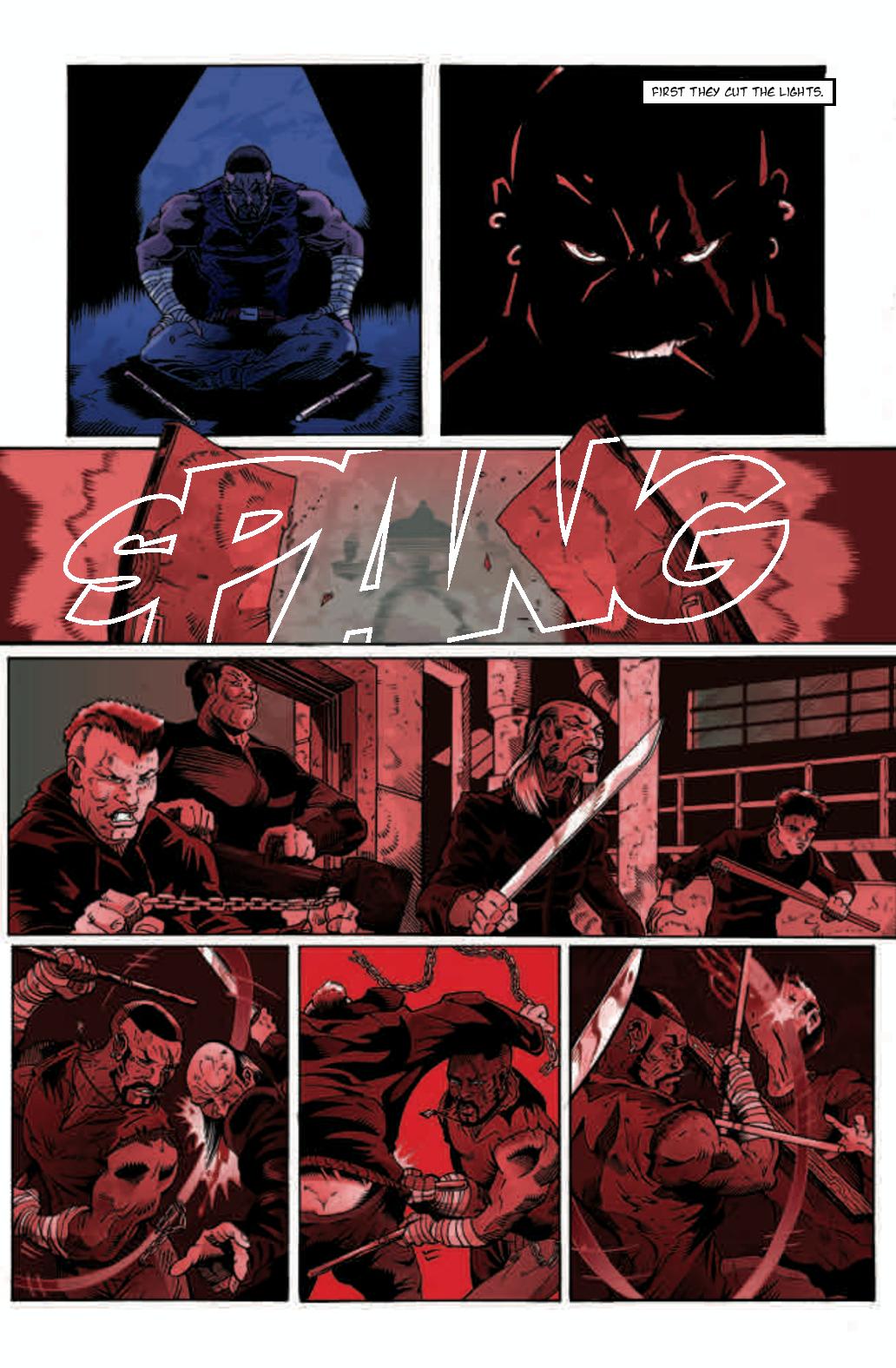 BIC: The comic book industry has been struggling of late, especially Marvel. DC Comics actually outsold them in November. What do you think is the main problem with the industry and how would you fix it?

Mike: Marvel publishes a number of comics that are thinly disguised angry rants and lectures from unhappy people. Readers want to be entertained, not lectured. Plus the plethora of renumberings, alternative covers, all the tawdry tricks of the trade. The best trick of all is a good script.

BIC: You introduced Microchip as an ally of the Punisher in The Punisher #4 all the way back in 1987, have you seen the new live-action Netflix series? What did you think of Ebon Moss-Bachrach’s performance as Micro?

Mike: ARGGGGGGH! People keep asking. I don’t get Netflix. One of these days.

BIC: Aside from your own series, are there any other characters you would want to work on or go back to working on?

BIC: What’s your favorite comic that you are reading right now?

BIC: Will folks be able to get their hands on Q-Ball outside of KickStarter?

Mike: We will have them for sale at cons, and I’m going to try to get a publisher to pick us up. 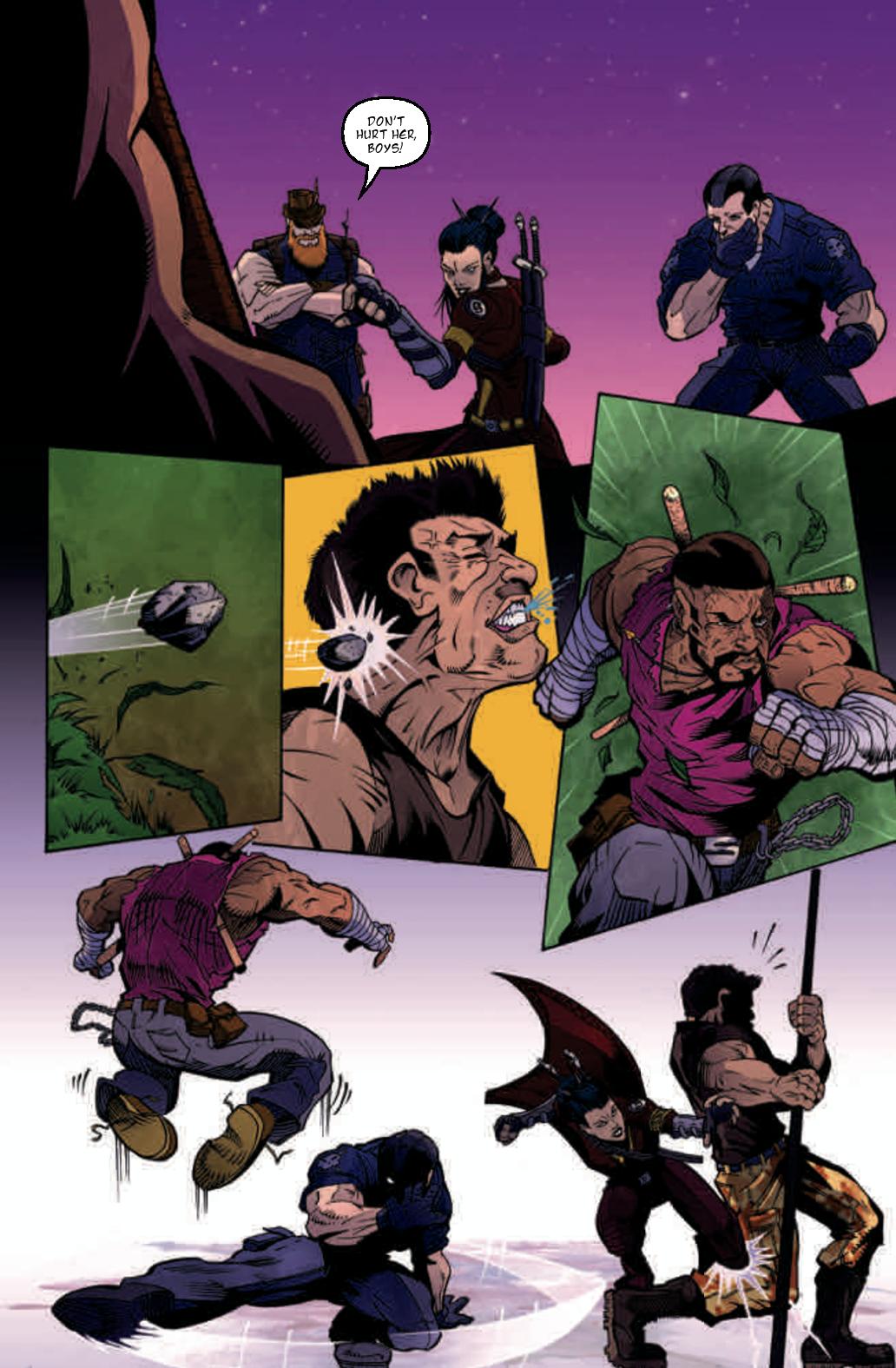 BIC: Which Comic Cons do you plan on attending this year?

Mike: Right now, only Pensacon in Feb. and Madison in March.

BIC: Since you adapted one of the most beloved Star Wars Extended Universe novels, The Thrawn Trilogy, I have to ask, have you seen Star Wars: The Last Jedi yet? What did you think about it?

Mike: Have not seen it. Perhaps when it comes to cable.

BIC: What’s the best way for folks to stay up to date with you and get the latest on Q-Ball?

BIC: Thanks for chatting with us! Can’t wait to check out Q-Ball!

As you just read you will be able to pick up Q-Ball #1 through the Q-Ball KickStarter or at the upcoming Pensacon in February and Madison in March. You can also get the latest on Q-Ball on their Facebook page and the latest from Mike Baron on his Twitter. We’ll definitely be following him!