DC Comics will be rolling out eight brand new titles from the pages of Dark Nights: Metal which they are calling The New Age of DC Heroes.

All eight of these titles will be illustrated by some of DC Comics’ top talent from DC’s Mater Class. They include Jim Lee, Andy Kubert, John Romita Jr., Tony S. Daniel, Iva Reis, Kenneth Rocafort, Philip Tan, and Ryan Sook.

These eight new titles will launch in January 2018 introducing some brand new heroes, some that have appeared in Dark Nights: Metal, and some from DC Comics illustrious past.

The eight titles are Damage, The Silencer, Sideways, The Terrifics, The Immortal Men, The Curse of Brimstone, New Challengers, and The Unexpected. 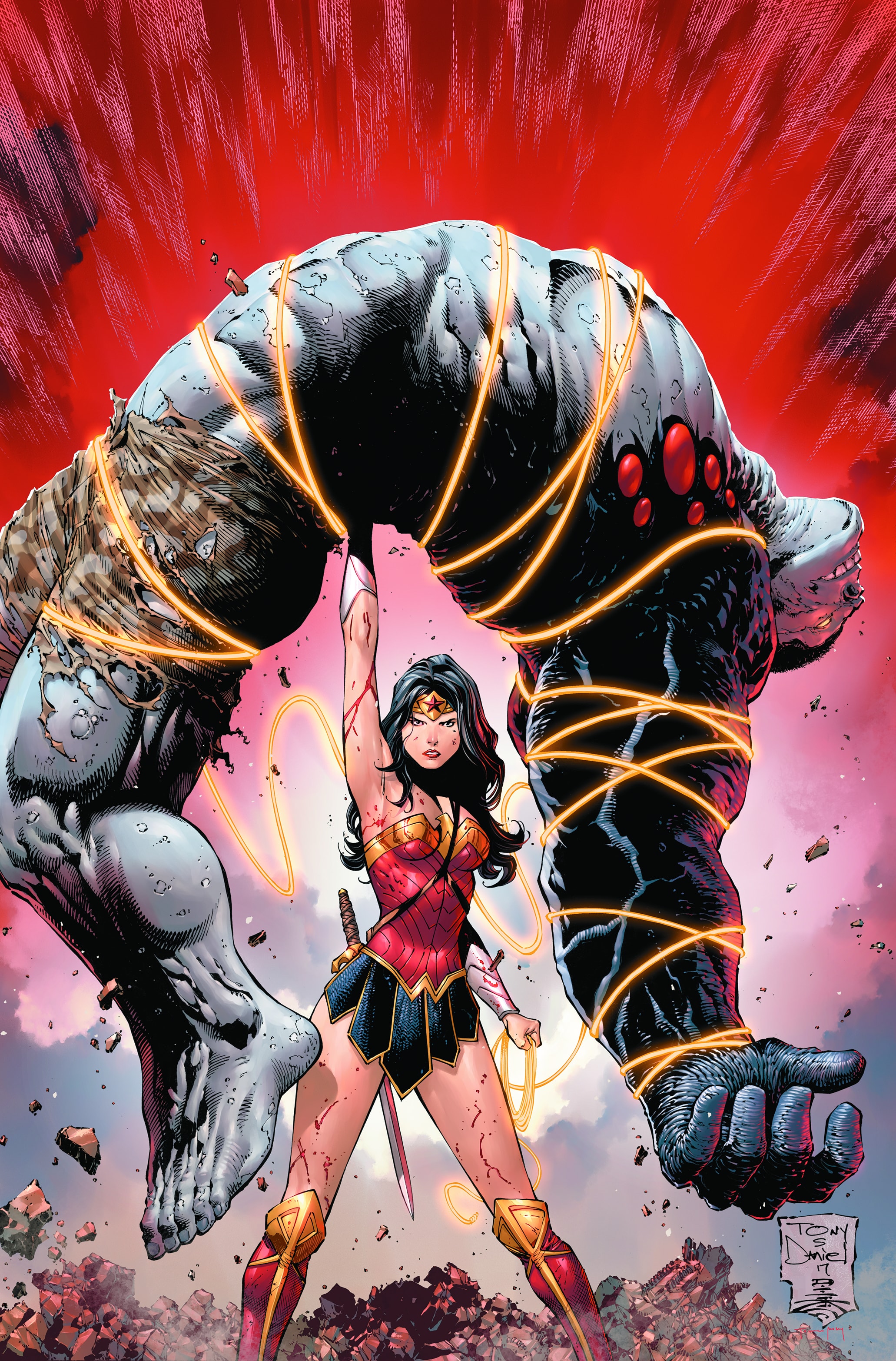 Damage is about Ethan “Elvis” Avery, a man who just wanted to serve his country, but was transformed into a monster.

Avery is the government’s own living, breathing ticking time bomb. He transforms into the monster Damage and loses all control for one hour a day. He’s cheaper than a nuclear warhead and twice as effective. 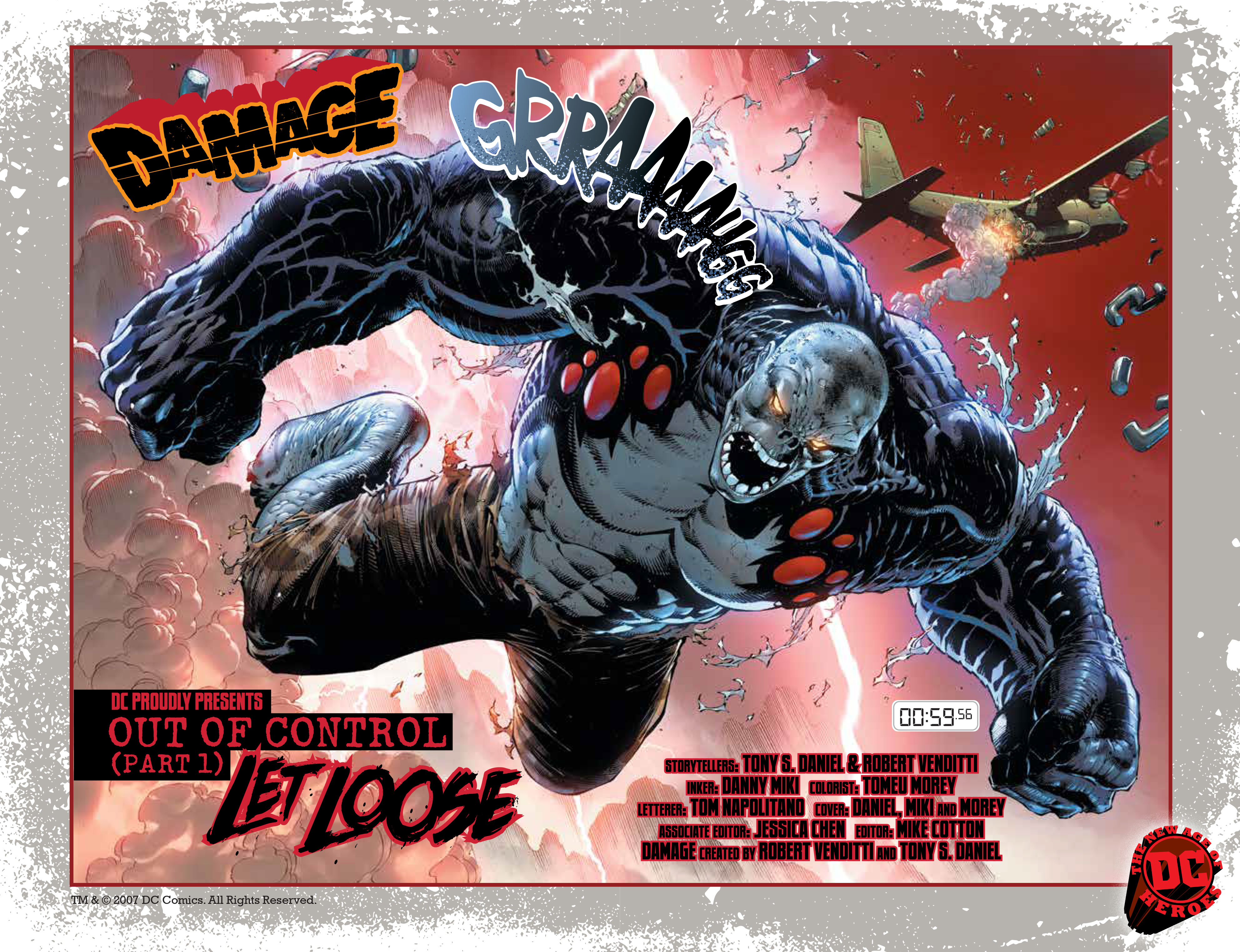 Damage will be written by Robert Venditti with artwork by Tony S. Daniel.

Venditti describes Avery’s journey, “His journey is about reconciling himself with his monstrous side, while still becoming the hero he set out to be.” 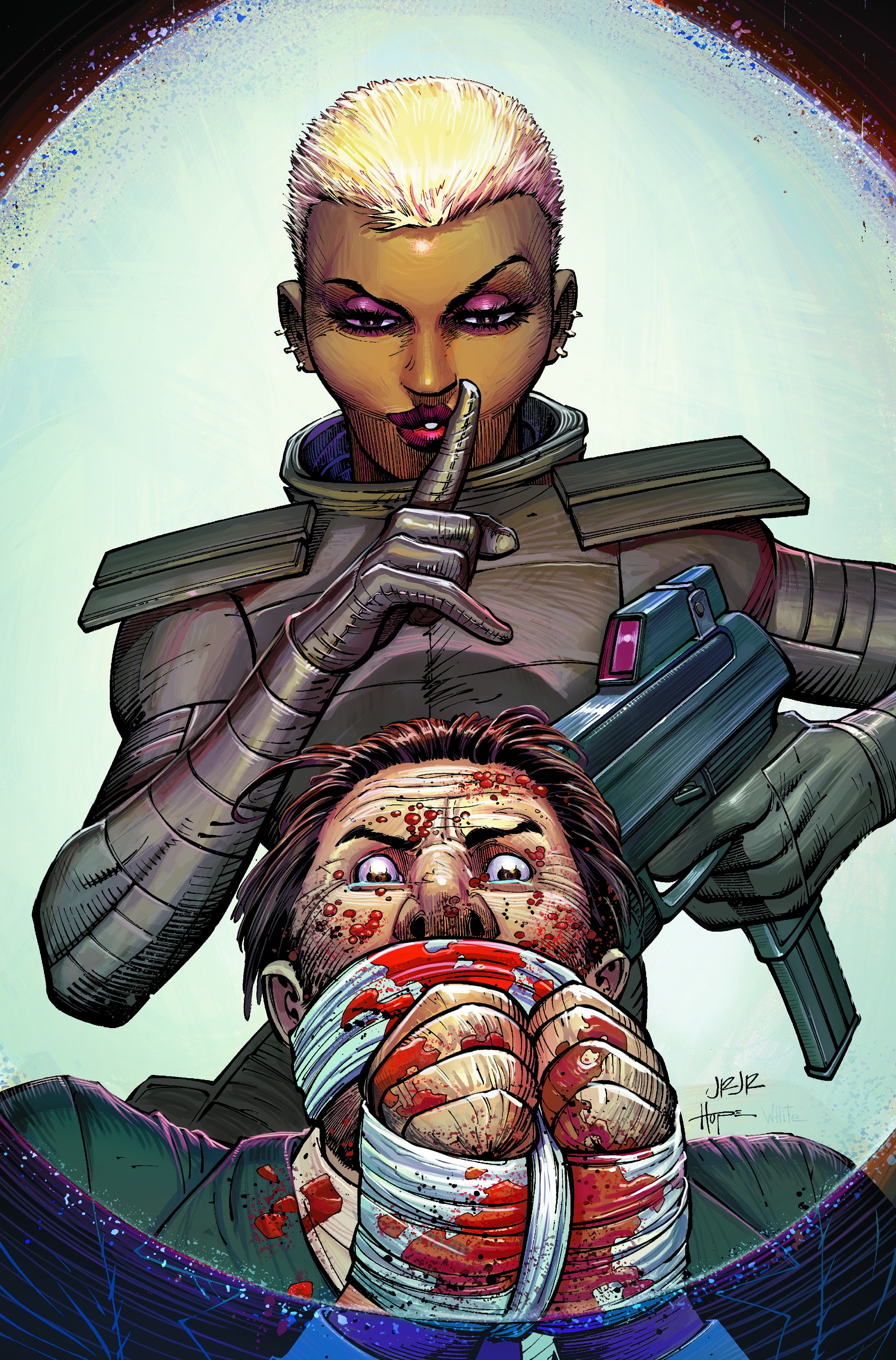 Honor Guest is one of the deadliest assassins in the DC Universe. You haven’t heard of her because unlike most assassins she was able to get out of Leviathan. She’s been living a normal life with a normal family in a normal house on a normal street.

However, her former employer Talia Al Ghul will drag her back into the business with a new mission and she won’t take no for an answer.

Honor Guest will have to use her super-strength, extensive training, and her devastating and stealthy meta-human abilities on Talia Al Ghul’s mission. 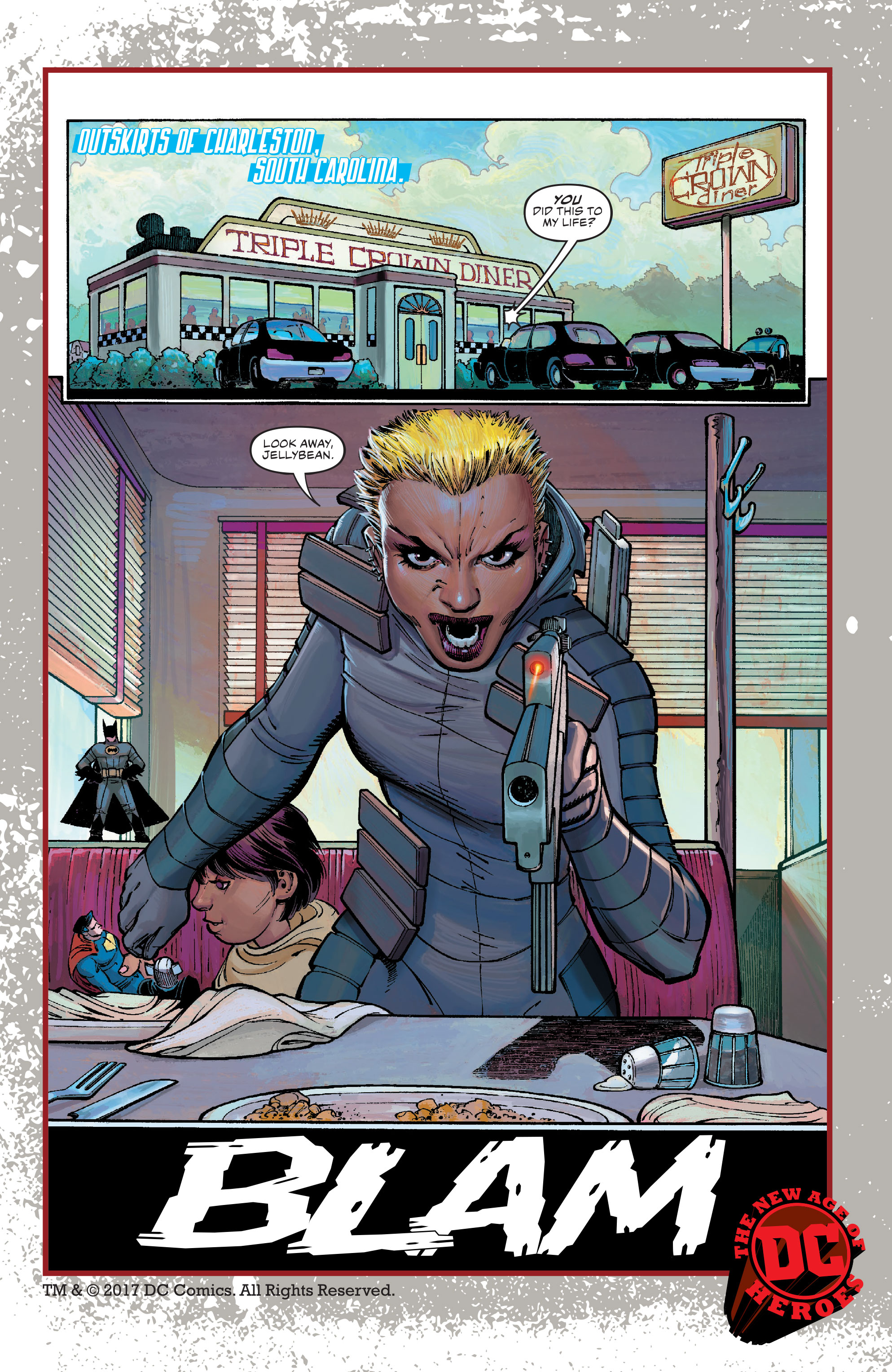 The Silencer will be written by Dan Abnett with artwork by John Romita Jr.

Romita Jr. describes what he likes about the story, “That’s what I like, something realistic and you add fantastic to it.” 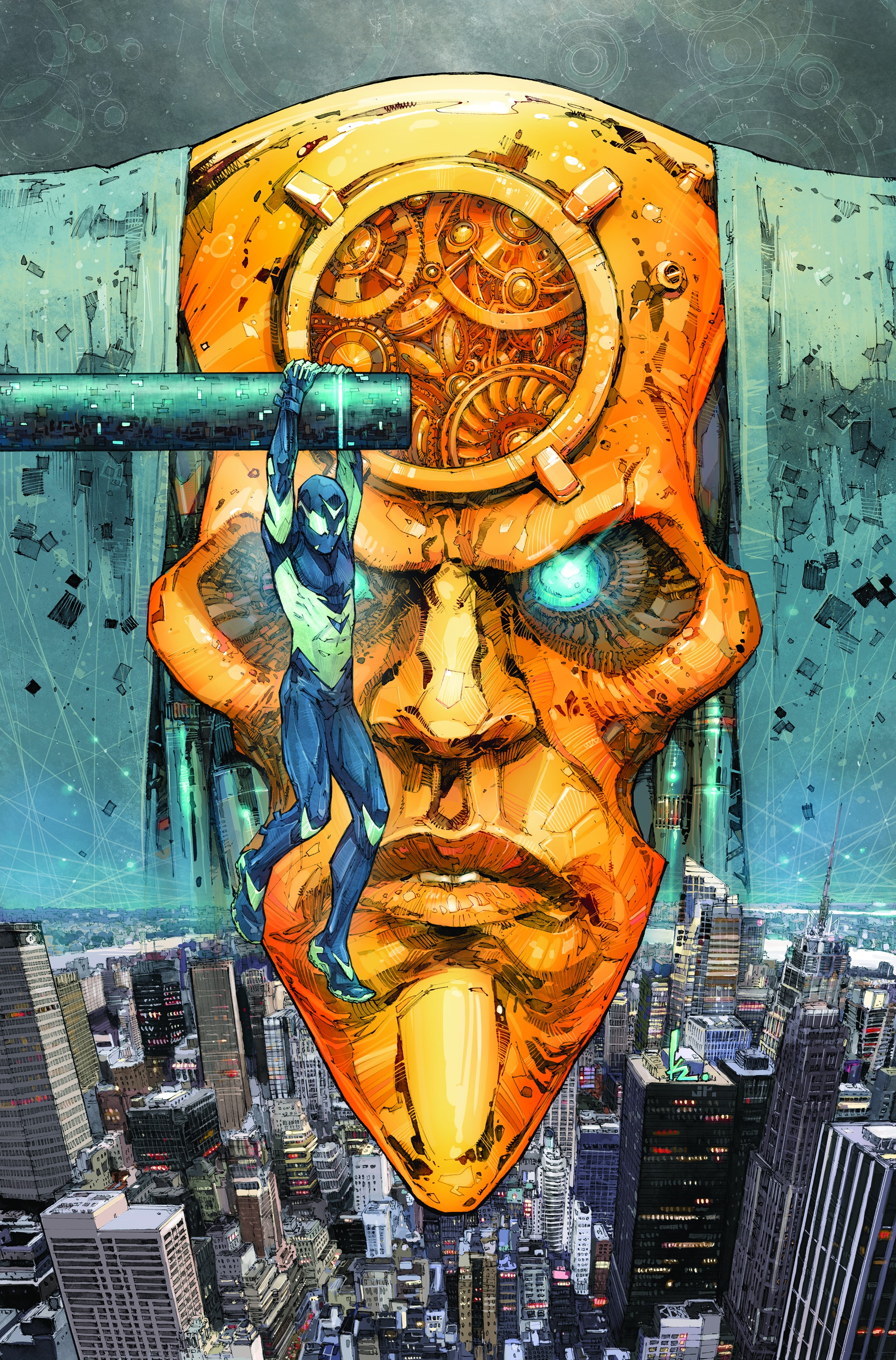 High School junior Derek James falls through a rift into the Dark Matter dimension and now has the abilities to create rifts in midair to leap through dimensions at will. Upon obtaining his new powers, he goes by the name of Sideways.

While his powers are extensive they come at a great liability. Tears are starting to form in the fabric of the space-time continuum. 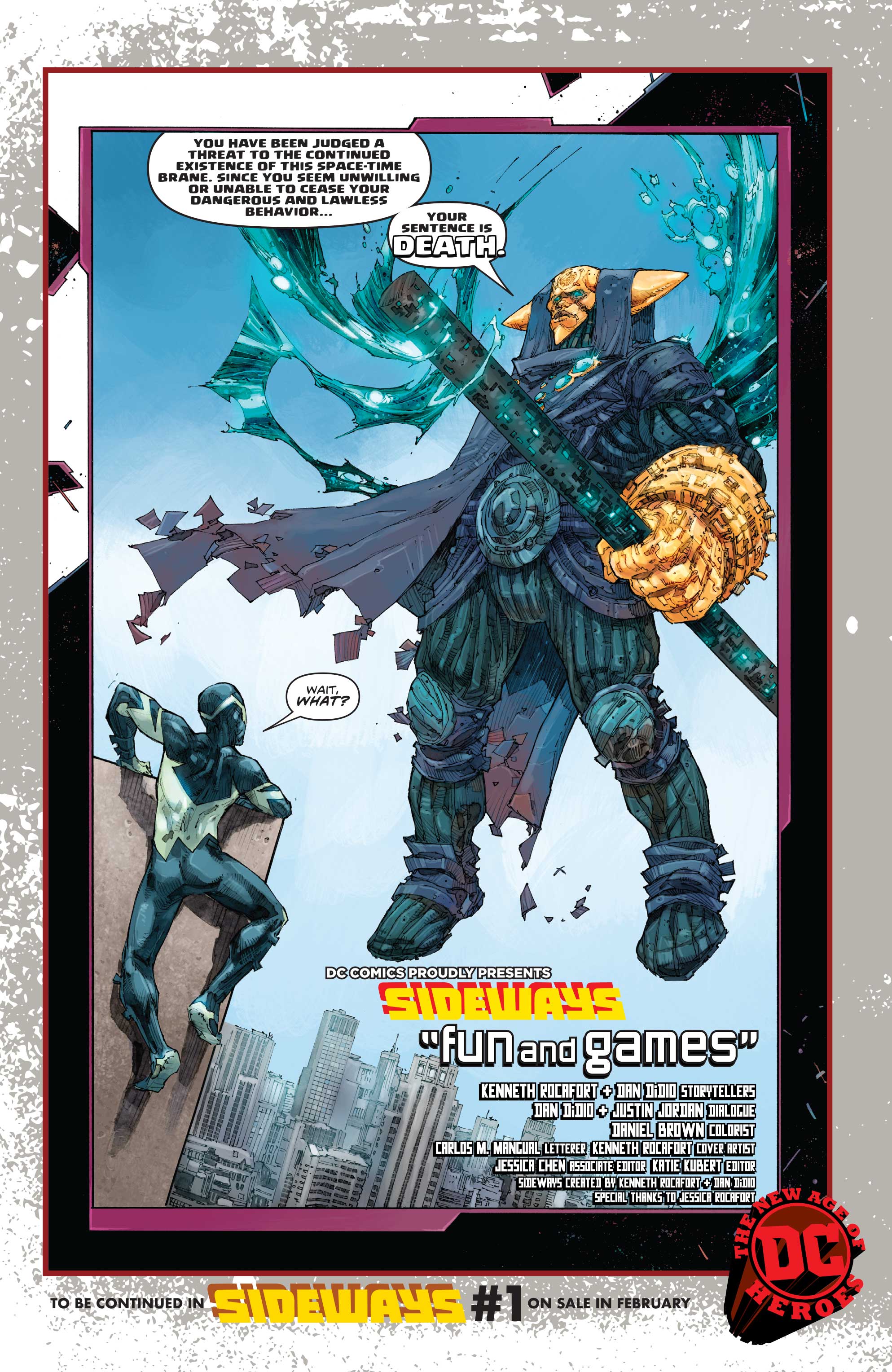 Sideways will be written by Justin Jordan and Dan DiDio with artwork by Kenneth Rocafort.

DiDio is excited about introducing a new character to the DC Universe, “It’s fun building a character from the ground up and learning how he works, fights and thinks.” 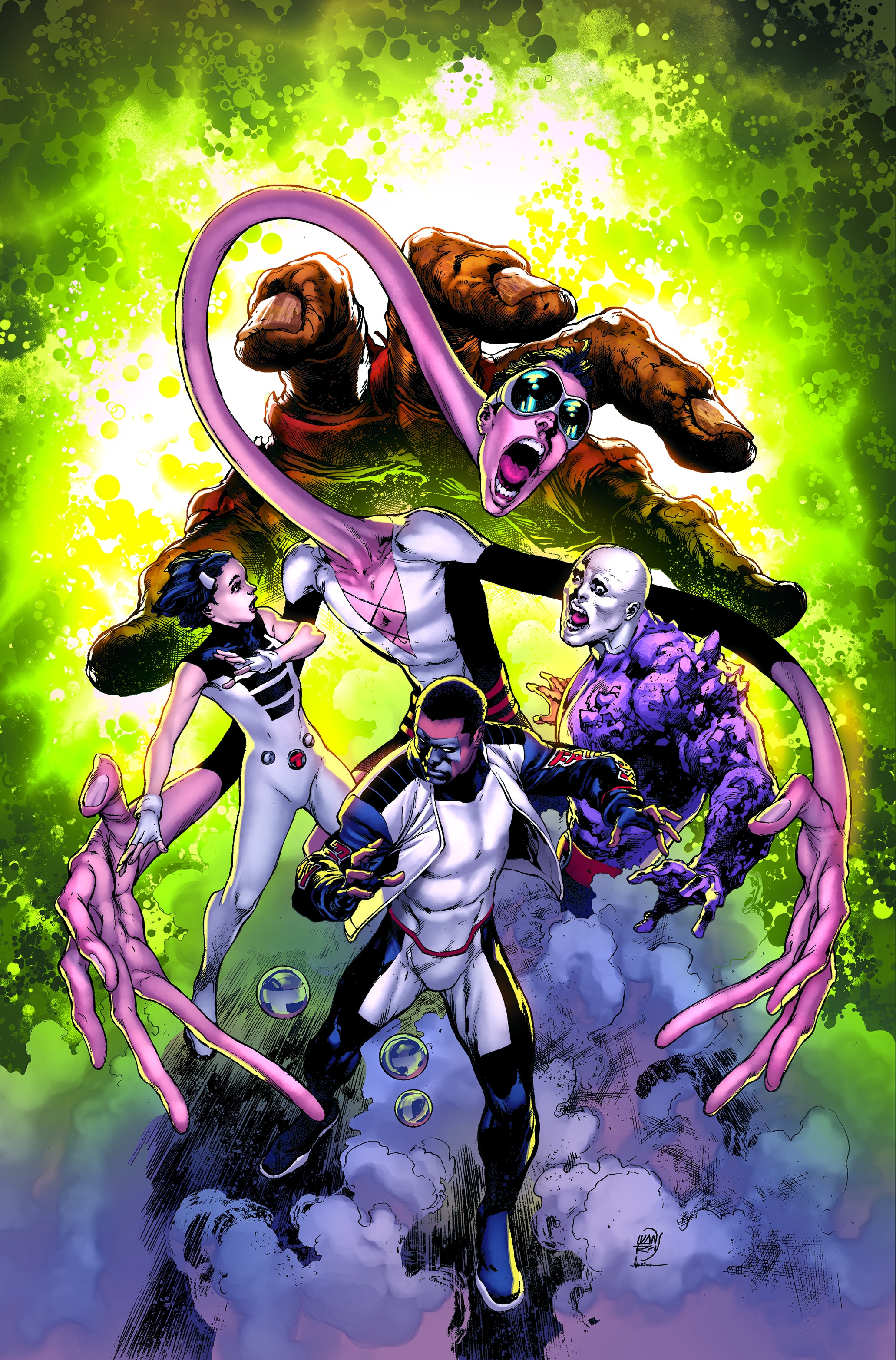 The Terrifics are a team of unlikely allies that include Mr. Terrific, Metamorpho, Plastic Man, and Phantom Girl. They find themselves literally bound together by a tragic accident. They must work together in order to find their way back home, but a new revelation introduces them to a brand new mystery. Where in the universe is Tom Strong? 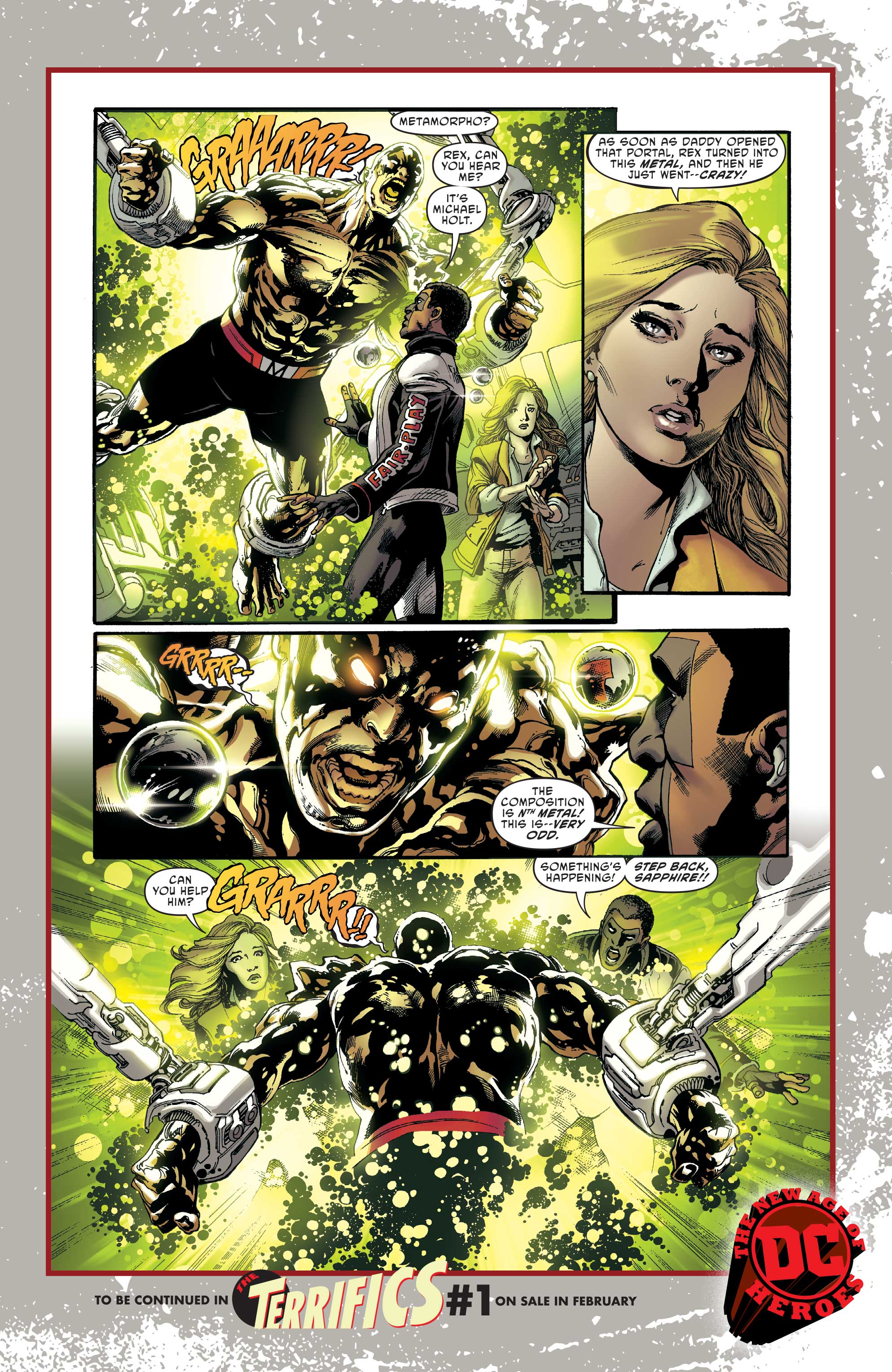 The Terrifics will be written by Jeff Lemire and Ivan Reis.

Lemire says, “The Terrifics allows me to do big adventure in the old-school Kirby style, but with a modern sensibility.” 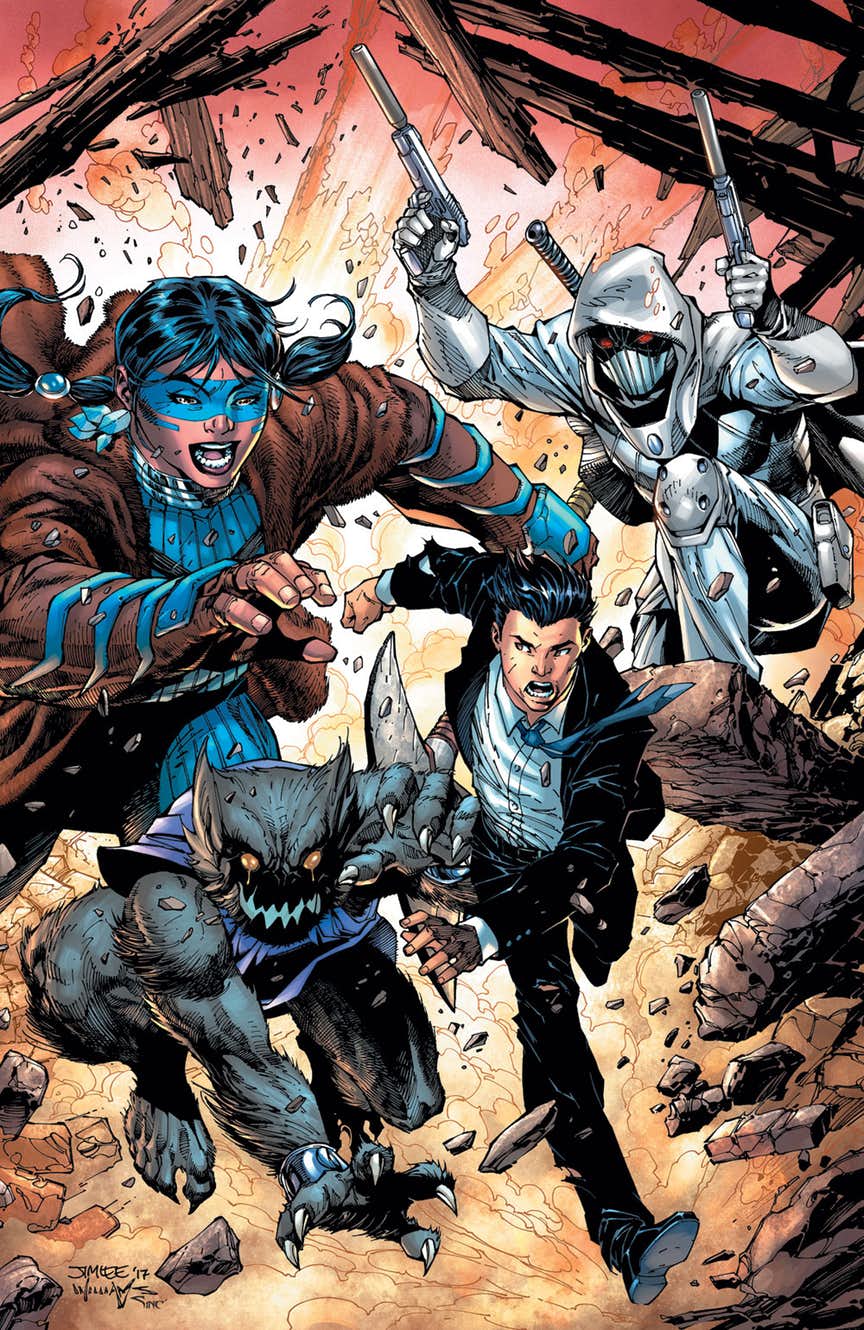 The Immortal Men are a group of heroes who have protected humanity from the shadows since the dawn of time. Heroes that can live forever.

The Immortal Men must regroup and seek out their last hope, a new metahuman known as Caden Park. However, they aren’t the only ones looking for Caden Park, Conquest is also seeking the new metahuman. Who will get to him first?

The Immortal Men will be written by James Tynion IV with artwork by Jim Lee.

James Tynion teases the new series by asking, “If the DC heroes we know and love represent a kind of heroism that lasts a lifetime, what would heroism look like over many lifetimes?”

The Curse of Brimstone 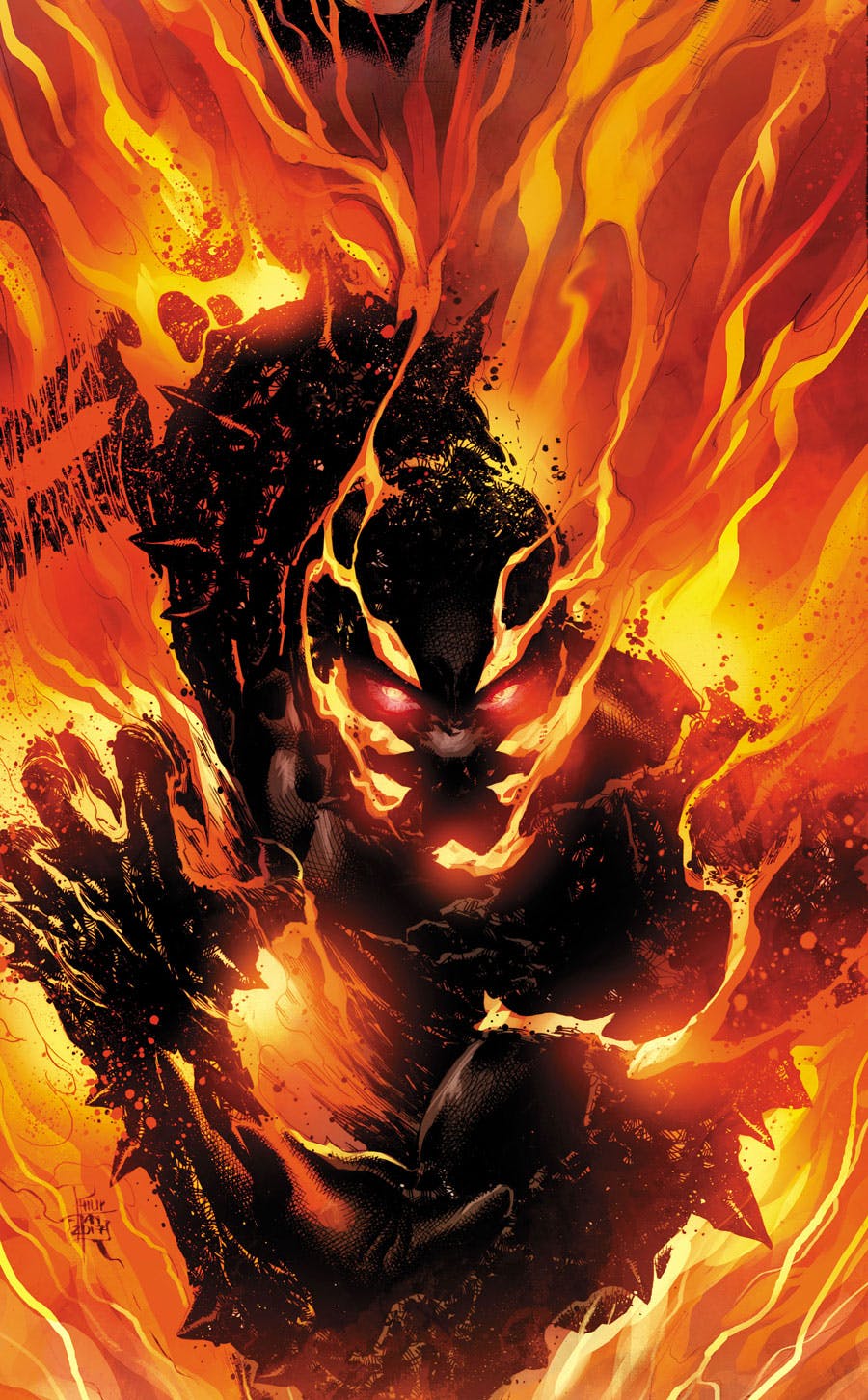 Joe Chamberlain unknowingly made a deal with the devil that cursed him into Brimstone. He now wields the power of fire and destruction in the palm of his hands. Now, he seek revenge on the devil who cursed him. However, in order to maintain the form of Brimstone he endures every second of fiery pain burning from the inside out.

The Curse of Brimstone will be written by Justin Jordan with artwork by Philip Tan. 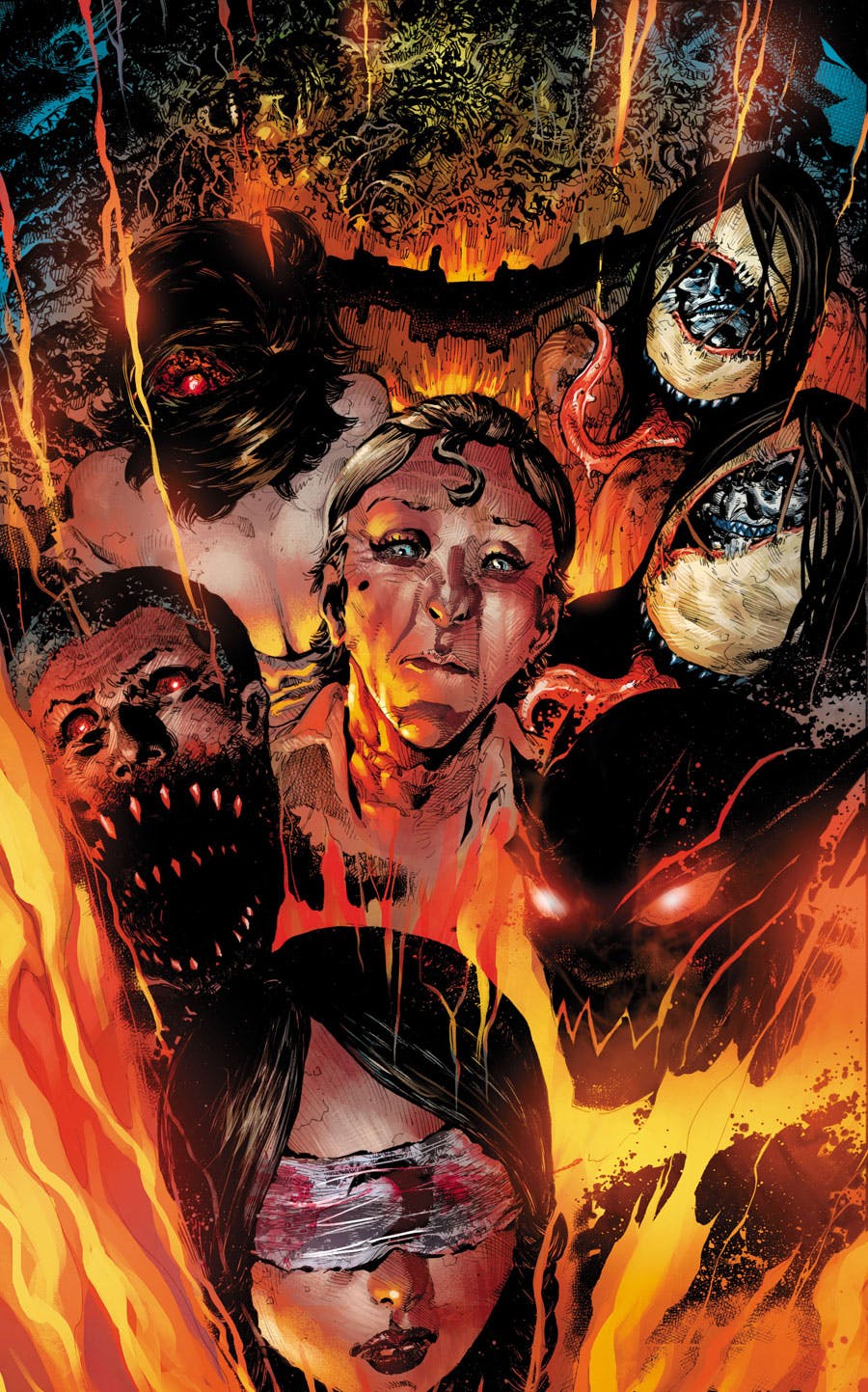 Jordan describes Chamberlain’s character, “He’s a character who wants to try and do good with a power that is fundamentally evil.”

The Curse of Brimstone is expected to hit comic book shelves on April 4, 2018.

The Challengers are reborn with a new cast and a new mission. They are living on borrowed time, running from death toward the greatest mysteries, wonders, and terrors of the universe.

Challengers Mountain suddenly returns after missing for years and it just gets weirder from there.

New Challengers will be written by Scott Snyder with artwork by Andy Kubert.

Andy Kubert described what we can expect, “I am so excited to do science fiction, dinosaurs and all kinds of things like that.”

The Unexpected offers a second chance for a new cast of heroes even if they don’t know they want one.

These new heroes yearn to show the world they’re more than their past mistakes. The series will focus on something we all face every day, wrestling with our pasts and the compromises we’ve made.

The Unexpected will be written by Steve Orlando with artwork by Ryan Sook.

Ryan Sook described the new characters, “They’re contemporary and not being built on a foundation laid by creators from decades past.” 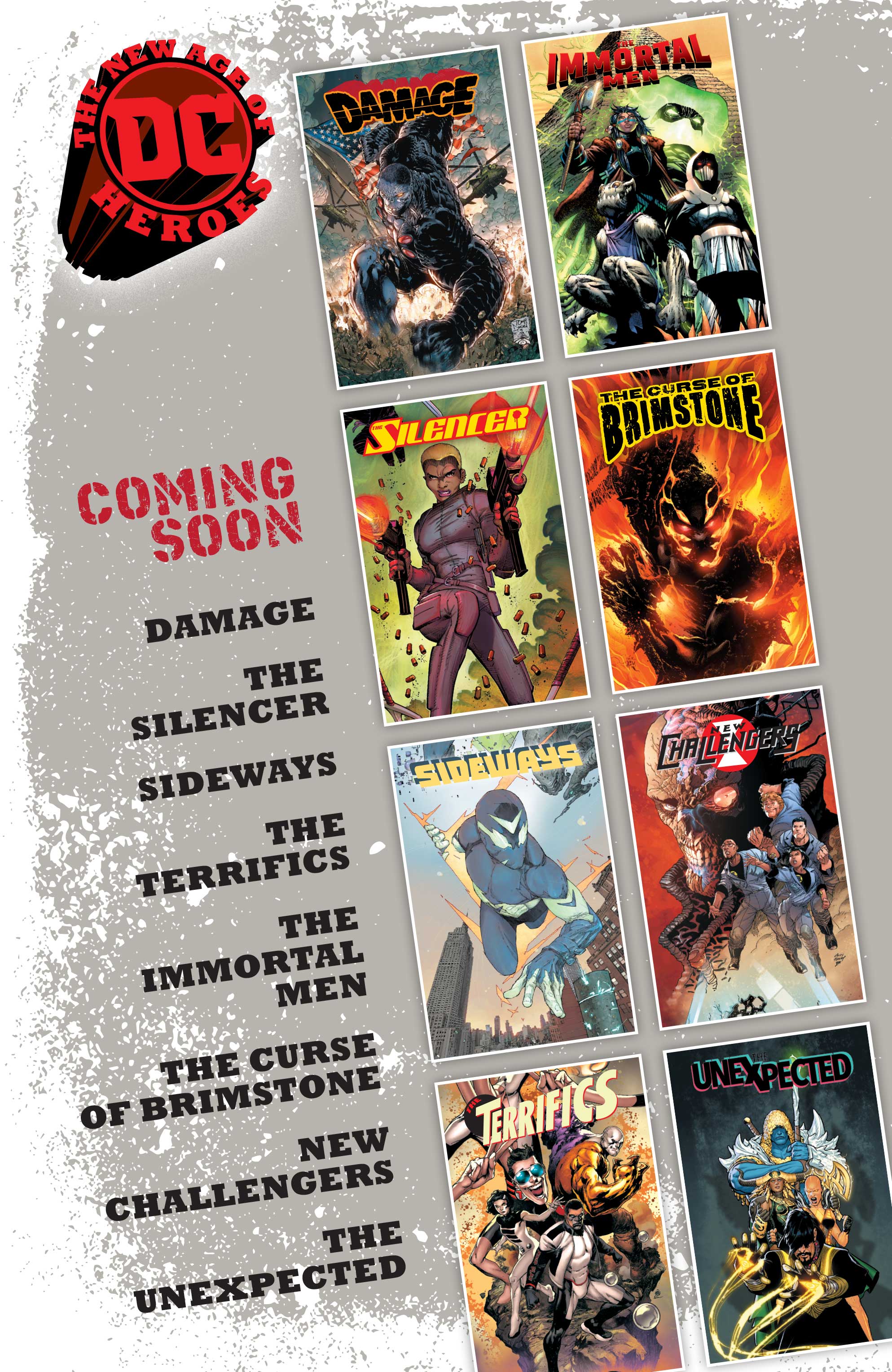 It definitely looks like DC Comics is going to be taking some risks with the New Age of DC Heroes, but they’ve also put some talent on them! I’ll definitely be checking them out. Will you?