Marvel Comics seems to be turning a corner. A number of their comics have been really good lately especially Donny Cates and Geoff Shaw’s Thanos. However, another stand-out comic has been writer Chip Zdarsky, penciler Jim Cheung, and inkers John Dell and Walden Wong’s Marvel 2 in One featuring The Thing and the Human Torch. In the second issue of Marvel 2 in One, Zdarsky and Cheung reveal the first true adventure of Reed Richards and Ben Grimm and it’s a funny one with Doctor Doom ending up being the butt of the joke!

The adventure happened years ago, before Victor Von Doom became Doctor Doom and the Fantastic Four arrived on Monster Island. It happened when Reed Richards, Ben Grimm, and Von Doom were in school together. Both Reed and Victor are competing for the Lord Kelvin Prize for Theoretical Physics. Reed ends up getting beaten out of the award by Victor Von Doom, but it’s not because his paper on Eternal Chaotic Inflation wasn’t stellar.

Victor Von Doom reveals the prize “went beyond the papers.” He even offers Reed some advice, “You should’ve spent more time with Professor Cho, complimenting his inane publications; with Professor Desalle giving her a life when her car ‘broke down.'”

Victor Von Doom used his ability to schmooze with the award givers to secure the Lord Kelvin Prize.

The snub would spur both Grimm and Richards to pull off their first adventure, a prank that would see Doctor Doom fuming by the end. 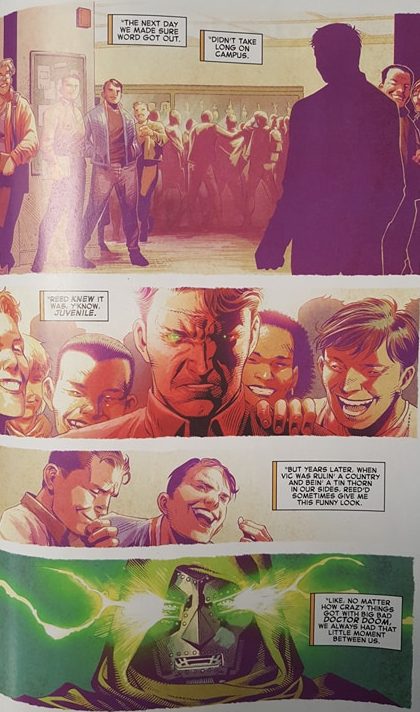 The two break into the school and sabotage Victor Von Doom’s Lord Kelvin Prize. Not only do they sabotage it, they ensure the entire school knows about the sabotage. It turns Von Doom into the laughing stock of the school! And it’s just a small prank too! Reed Richards and Ben Grimm change Victor’s name on the Prize from Victor Von Doom to Victor Von Doof!

It might be childish, but it’s still funny! If you haven’t picked up Marvel 2 in One yet. I highly recommend it. It’s a back to basics book that incorporates action, humor, and just plain good storytelling!