**Warning Spoilers for Batman #40 Below**

In Batman #40 by writer Tom King and artist Joelle Jones, the two reveal Wonder Woman’s pet in a friendly chat between Batman and Wonder Woman.

But first, let’s provide some context. Batman and Wonder are stuck in The Realm. They are fighting a never-ending Horde that threatens to invade Earth and destroy the world. They made a deal with the Gentle Man to give him a break and allow him to visit his wife on Earth. However, the Gentle Man didn’t tell Batman and Wonder Woman that time behaves differently in the realm. A decade can pass in The Realm when only an hour or two has passed on Earth.

In the third decade of their fight against The Horde, Batman and Wonder Woman take a break to chow down on some of the tasty local cuisine, it looks a lot chicken.

Batman begins the conversation by stating he missed his dog. It catches Wonder Woman by surprise. But Batman continues, “I miss everyone. The boys and cat. The family. And…I miss my dog. Ace.” That’s when Wonder Woman reveals she misses her pet too. Her pet kangaroo. “I miss my kangaroo.” Batman is completely caught off guard. He quizzically asks, “You have a…kangaroo?”

Diana quips, “I don’t talk about it.” Batman responds, “Okay.” It appears we won’t get any more information on Wonder Woman’s kangaroo pet. But after she bites into the chicken-looking foot she reveals the Kangaroo’s name. “Her name is Jumpa…She is nice…And I miss her.” 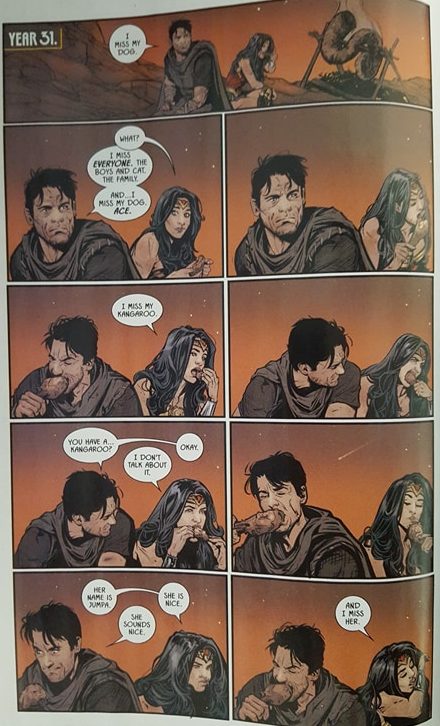 There you have it. Wonder Woman has a kangaroo named Jumpa. I wonder if the two practice boxing together?

Regardless, I want to see a story about Wonder Woman and Jumpa the kangaroo taking down some villains in the Australia Outback! Who wouldn’t want to see that?