And he made some big changes to the DC Multiverse, but first he provided a glimmer of hope for the heroes as one of their primary foes saw an unlikely death.

Like any good writers, just when Grant Morrison and Scott Snyder give readers a little hope they take it away. But the final page gives the most surprising reveal of all. The answer to the questions posed in the pages of the Dark Knights: Metal story.

Detective Chimp was losing his memory because he, too, was being torn asunder. The final pages of the issue have Chimp losing his consciousness. He asks those around for aid, a futile attempt. But what happens instead is a remarkable happening that only a genius like Grant Morrison could have been a part of. 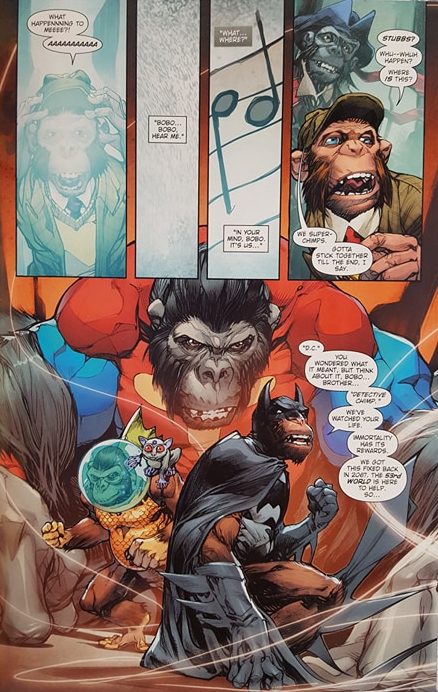 The last page has Detective Chimp meeting the Universe of his counterparts. He’s greeted by a Giant Chimp Superman, an aquatic Chimp Aquaman and a Chimp Batman! A wonderful band of misfits that have arrived to save the day.

If the pages of Dark Knights: Metal #6 really do feature a chimp Justice League saving the Multiverse from The Dark Knights, Snyder will truly have outdone himself. One of the many amazing parts of a Grant Morrison comic is the peculiarity. The fact that while the story structure and narrative is completely sound, it may star some of the weirdest characters in the oddest settings comics have to offer. Readers just have to roll with it. 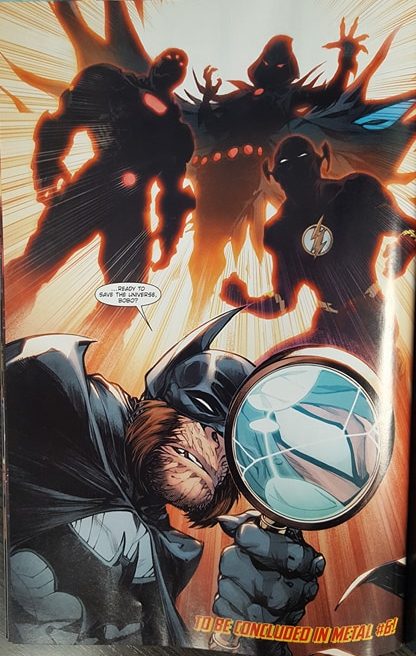 That’s the lesson Scott Snyder seems to have taken from the elder DC writer: embrace your weird. When it comes to DC superheroes it doesn’t get any weirder than Detective Chimp. The most unlikeliest of heroes are often the greatest. While Chimps aren’t the typical leading heroes of comics, they’re just the kind of heroes the DC Universe needs leading into the Dark Knights: Metal’s finale in issue #6.

Because the connection between Detective Chimp and the DC Universe is so strong it’s in the name.