Chip Zdarsky and Valerio Schiti put together a classic story in the latest issue of Marvel 2 in One #3. Not only do they combine classic Marvel humor with a great action/adventure story, but there are also plenty of plot twists and surprises that keep you at the edge of your seat.

One of those twists involve a mad villain plotting a return to greatness by infiltrating the Fantastic Four. However, the more immediate threat is the return of the villainous Spider-Man villain Hydro-Man.

The Thing and Human Torch visit Hercules in a Brooklyn bar to determine how he reactivated his powers. The Human Torch’s powers have been on the fritz lately and he needs to find a way to restore them so he and The Thing can search the Multiverse for Reed Richards and Sue Storm.

Hercules takes them to the back woods of Jack Pine, Wyoming where they once again run into Rachna Koul who runs scientific laboratory that allows both heroes and villains to reacquire their powers. Rachna explains Hercules’ powers were restored by repairing a conduit in his body that is linked to the source of his power.

While she’s explaining how much her services cost, they discover she’s rejuvenating Hydro-Man in a tank. Human Torch and Rachna get in a heated argument, with Human Torch about to stop the regenerative procedure. However, it’s too late. Hydro-Man breaks free from his tank and launches a devastating attack against Human Torch and The Thing. It’s not looking good for the heroes. But then Hydro-Man believes Koul set him up and sets his eyes on her. It’s his fatal mistake. She zaps him with her Zeptoparticle-Enhanced Artificial hand. 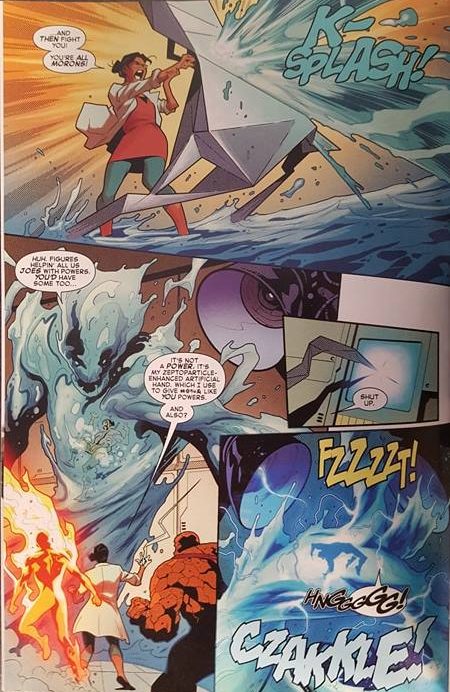 Rachna’s hand does the trick and quickly defeats Hydro-Man. Rachna then forces him to leave her lab via the toilet. 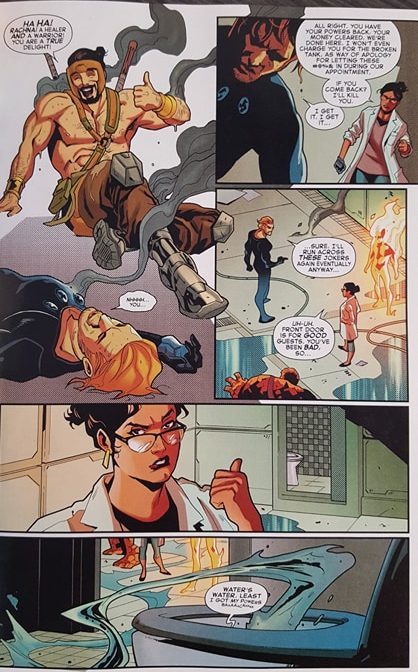 It’s an exciting battle sequence and shows just how tough Hydro-Man can be. But it also shows the weakened status of both the Human Torch and The Thing. Will Rachna be able to help them recover their powers? Find out in Marvel 2 in One #3 which is on sale today!