“But if you could choose your last words, what would they be?”

Joshua Williamson had been a writer to watch before he became the writer of The Flash after Rebirth. Now, he’s one of many talented DC writers who has a penchant for fantastic, original stories. Enter Deathbed. Williamson’s style can be a bit crass at times. He likes to show characters at all times of life, most evident when readers first find the character of Val is an…interesting state. But that’s because Williamson likes to dig deep and have fun. His characters are incredibly vibrant and colorful. Which is one of the many reasons Deathbed #1 is a great comic. 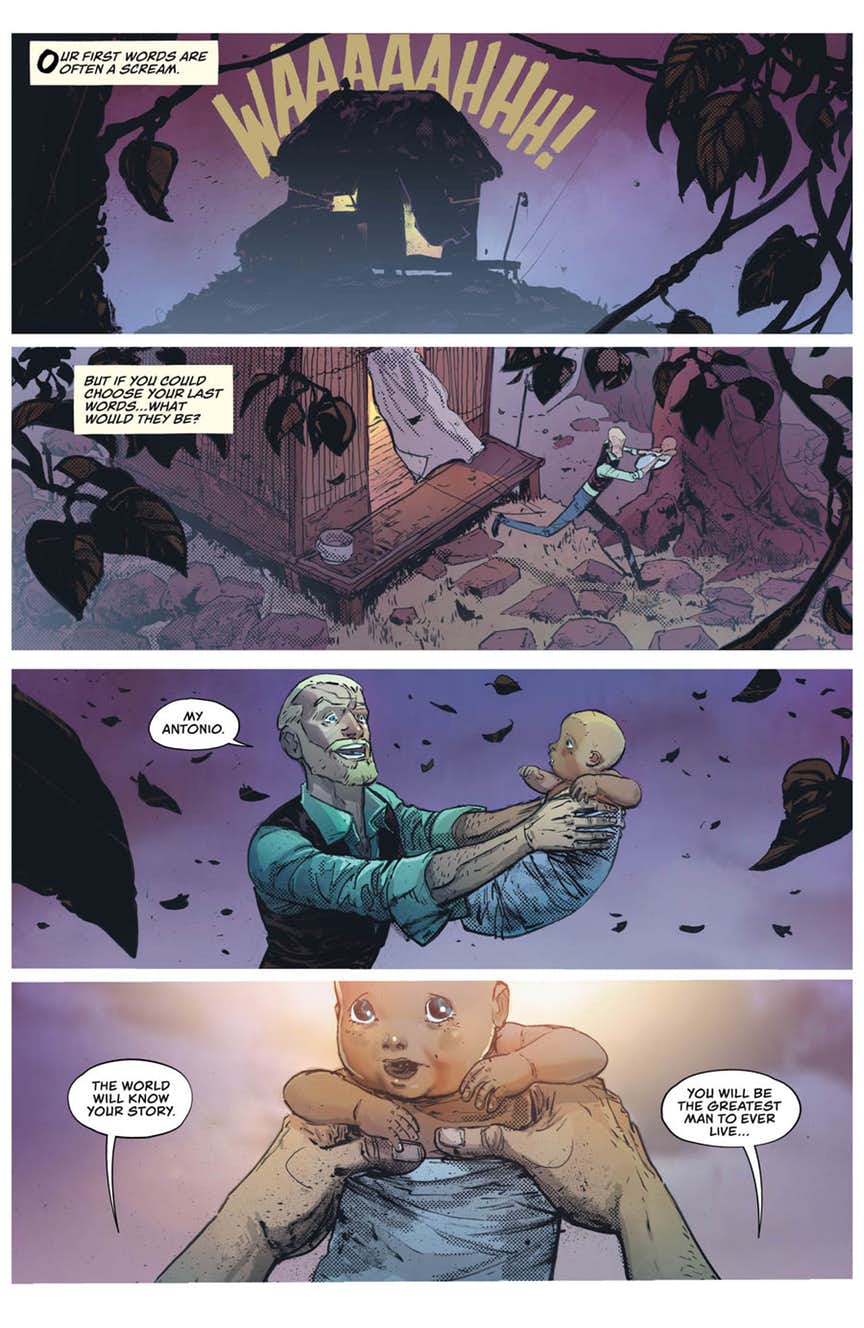 Another is the bright and energetic art of Riley Rossmo. His art can give the impression that the very pages themselves are moving. A lively flow that is perfectly aided by the colors of Ivan Plascencia. Considering the extreme mix of gore and vulgarity Williamson is writing, Rossmo is the perfect fit. Together the two have created a humorous and adventurous tone, even if it takes a while to get to the good stuff.

“So what? Neither have I…But money is money, and you NEED money!”

The story is a slow build, but by the end of the issue the premise is more than interesting. The star of the show is Valentine Richards, a ghost writer who’s sick of being a ghost writer. Of course, just as she finds herself falling out of love with the business she gets an important phone call. An important job offer that she is unable to turn down. It’s not the most original introduction, but it works for the character. Unfortunately, the issue takes a little too long to get to the rest of the story.

Writers have occasion to make fun of writing tropes and cliches while doing them. Such is the case with Deathbed #1. As Williamson introduces a fairly recognizable premise and setting, he starts to break it down. The problem is that too is also a writing cliche. But as soon as the subject of her writing, Antonio Luna, arrives in the issue the energy levels shoot to 11. 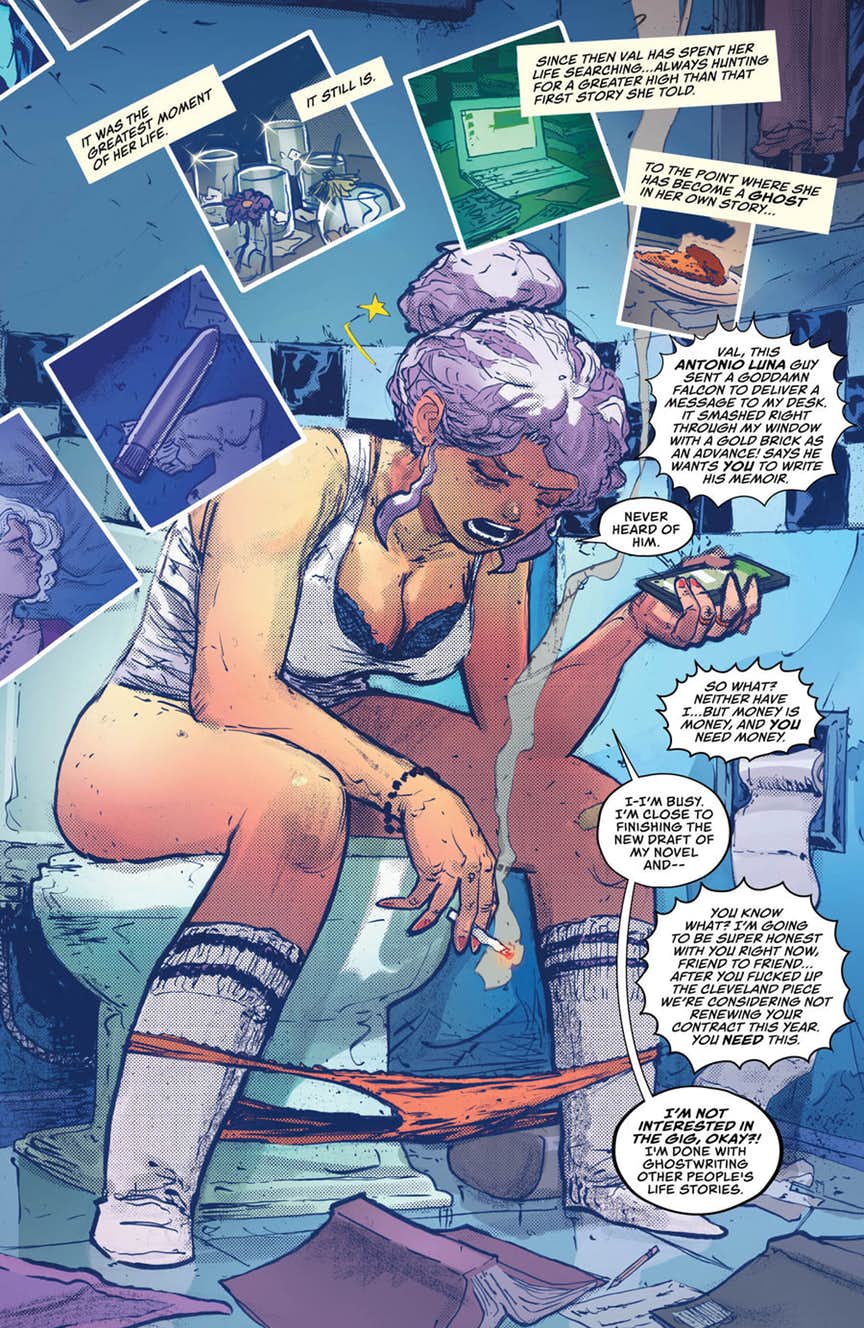 The story becomes fast-paced, exciting, and adventurous. Perhaps a commentary on the state of Val’s life at the time. That she needed Luna to give her life a boost. While that should be true of Val’s life it shouldn’t necessarily be true of the first 15 pages of the comic. But thanks to the art of Riley Rossmo that isn’t the case.

Riley Rossmo should be used to darker subject matter by now. From Rasputin to Hellblazer, he’s ventured through all kinds of awful. Depicting mankind and magickind at their worst. Well, now he gets the chance to do so again. But like any good artist he doesn’t make it look like anything readers have seen before. The world of Deathbed is just as vibrant and beautiful as any other Rossmo work. 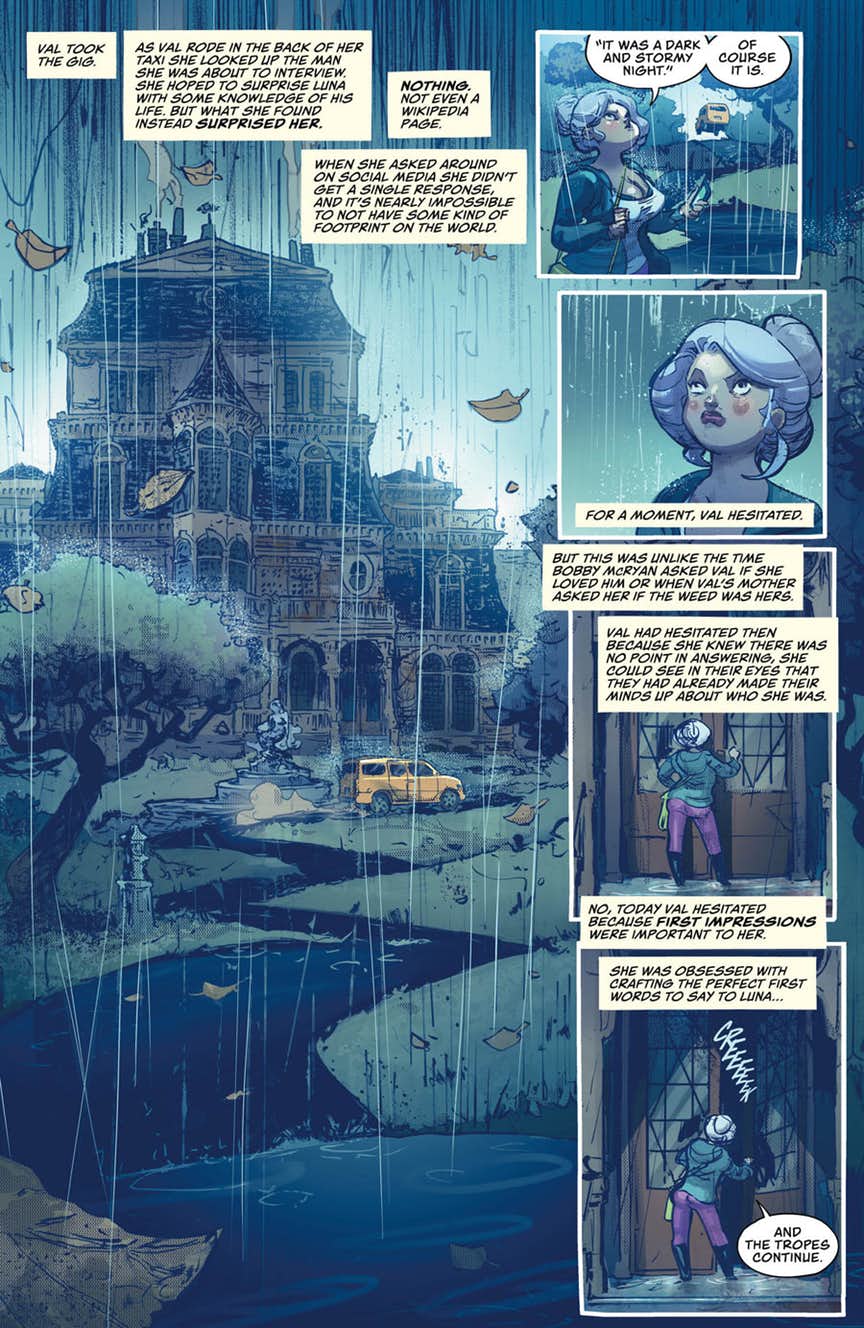 Along for the ride is one of the best colorists in the business. Ivan Plascencia is the perfect companion for Rossmo. Together, the two weave an energetic and electric landscape of colors and shapes. The lines are anything but static, depicting an almost endless motion that keeps the pacing of the comic quick when the words are a little slow. But thanks to excellent characterization by Williamson and wonderful art by Rossmo and Plascencia, Deathbed is likely to delight readers for quite some time.

The premise alone can’t sell a comic. The execution, the art, the entertainment and quite a few other factors play into the desire to pick up a comic. Or to pick up the next issue. While it takes Deathbed #1 some time to get there, it eventually becomes a great debut. The characters of Val and Antonio are already living in the imagination and outside of the page by the end of the comic. By giving readers just enough information, Williamson promises a wild ride without revealing any of the spectacle. This is about one of the greatest adventures readers have never heard of and Valentine Richards is our lens.

Painting the illustrations for this tallest of tales is one of the most eye-catching artists in the business. Riley Rossmo has had plenty of experience bringing different corners of the imagination to life. He has no problems bringing the already-intriguing ideas of Williamson to life. Time will only further prove that the two are already a fantastic creative team.

But the pace needs to be a bit quicker. It makes sense for Joshua Williamson to sell readers on Valentine before introducing Antonio, but the transition could have been a bit smoother. But that doesn’t matter anymore. What matters is the road ahead. A life of stories lay at the feet of bored writer Valentine Richards. Just what she’s going to do about it should make for a fantastic series.