Alex Garland and Science Fiction go together like two peas in a pod. Writing 28 Days Later for Danny Boyle put Garland on the map, but Dredd and Ex Machina made him one of the best science fiction directors of our time. His ideas and philosophies explore the depths of human emotion and instinct. A writer and director who tells different stories about intelligence and free will. The kind that shine a new light on humanity. One that isn’t so complimentary.

Annihilation continues Garland’s exploration of humanity. But instead of demonizing mankind outright, many perspectives are explored. Because so much of the film is up to interpretation, Annihilation joins many Science Fiction classics that have left the audience wondering. Garland continues his reign at the top of Science Fiction Cinema. In this visceral thriller, he pits Natalie Portman and a team of scientists against The Shimmer, an extraterrestrial force growing from a meteoric point of impact.

Like great Science Fiction, the film uses its subject to explore the humanity of its character. While the plot would be better served by focusing more on one character instead of several, The Shimmer serves as the catalyst of development. Sending its inhabitants into a whirlwind of emotion, disorientation, and mutation. Portman leads a fantastic cast into an aura of the unknown. What returns is a great film that could have used some finishing touches.

The film speaks volumes about emotion, humanity, and morality. But the setting is surprisingly small. A pocket of an undisclosed location surrounding a Lighthouse has been exposed to an unnatural force. That force is growing. Every team sent to explore the phenomena disappears, never to be heard from again. It’s a familiar tale. One that has begun many Horror and Science Fiction films in the past. What separates Annihilation is Garland’s unique sense of unease. This permeating sense of dread coupled with captivation that leaves the audiences chained to the screen.

Unfortunately, the film doesn’t feature Garland’s unique sense of perfection. Unlike Dredd and Ex Machina, this film has quite a few technical issues. While the effects are great, they are few and far between. The Shimmer could do with more occupants. But every encounter the scientific team has with a piece of nature is still gripping, even if shots are occasionally out of focus. It gives the impression that the film was hastily shot in places, but it does little to hamper what is an incredible feat of filmmaking.

Alex Garland’s unique touch is what makes his growing filmography so admirable. The kind of genre filmmaker that needs to continue making films. This is the kind of science fiction that will leave audiences uneasy and yet completely transfixed. Entering a world of color and evolution.

It takes a Village

While Natalie Portman is very much the main character, she leads a fantastic cast of characters and actors. Tessa Thompson, Oscar Isaac, and Jennifer Jason Leigh are just some of the slew of actors tasked with bringing Garland’s unique world to life. The tone is so incredibly delicate; balanced by emotionally-driven performances that take every actor to the extreme of human emotion. The Shimmer is an imposing force on the mind. It forces out demons and mentalities usually pushed deep down into a person’s personality.

That’s where Annihilation shines. When taking its character through hell to show them something not yet seen. A side of themselves and a side of the Universe. Not many Science Fiction films try to couple humanity, technology, and morality in such a unique narrative. 2001: A Space Odyssey, The Holy Mountain, and The Tree of Life are just a few films that come to mind. Annihilation does this on a smaller scale, but one that can leave audience members gasping for air. Because as the team delves further and further into an unknown nether, their very motivations and memories are questioned.

Garland makes clever use of the fact that audiences are used to certain edits, or certain gaps in time. It further demonstrates that Alex Garland is a magician with an ever-growing bag of tricks to mesmerize.

Annihilation isn’t a perfect film. It probably could have used a bigger budget; it probably could have used about 20 more minutes. But it’s a mesmerizing addition to the filmography of one of the greatest voices in Science Fiction cinema. Every film of his has a unique perspective. Either giving its audience tons of fun and entertaining action, like Dredd. Or asking moral questions of its audience by ways of its subject matter, like Ex Machina. 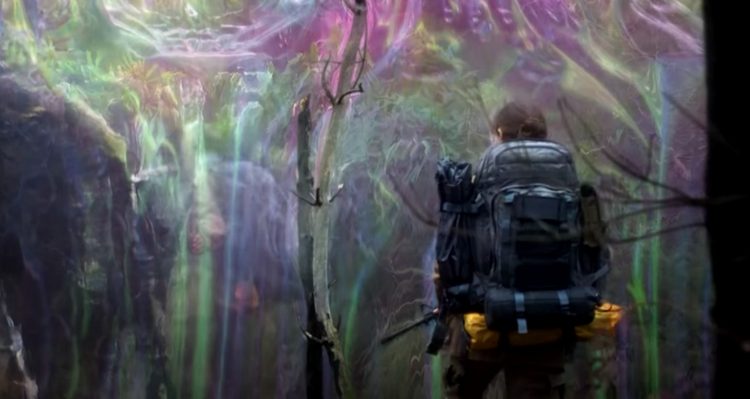 Annihilation manages to do both. This is a fantastic thriller with roots in Science Fiction, Horror, and Drama. One that proves yet again that Natalie Portman is one of the best actresses in the industry with range capable of leading a film in any genre. That’s the level of mastery that so obviously serves as the foundation of Annihilation. A plethora of gifted artists set out to make an effective and emotional film, and that’s exactly what they did.

Alex Garland’s next project will always be one to look forward to, no matter what it might be. While the idea of him helming a massive studio film is intriguing, he’s doing a fine job of creating visceral films that manage to feel like a film with twice the budget. The bigger the studio he works for the more hands muddy his already wonderful ideas. Hopefully, Garland can find a good place in the industry. One that gives this incredible filmmaker the budgets he needs to keep telling more stories like Annihilation.