**Warning Spoilers for Batman #42 Below**

Tom King teams up with Mikel Janin and June Chung for Batman #42 where the entire Earth is controlled by Poison Ivy except for Batman and Catwoman. That’s right even Superman, the Flash, Kid Flash, Wally West, Wonder Woman, Jessica Cruz, and even Harley Quinn are all under Ivy’s control.

Even with the entire world under her control, Poison Ivy is still leery about Batman and Catwoman. She’s tasked Superman to follow them everywhere they go and exploit his powers to keep track of them especially his super hearing.

And that’s what Batman exploits. While Batman and Catwoman go out on the town to order a burger and discuss their marriage proposals, Batman leans in close to Catwoman. He tells her, “Come close. I have something to tell you something. I don’t want her to hear.” Catwoman responds, “Okay…” Batman continues, “I want you to know…I love you.” Catwoman replies, “Well, that’s very interesting, Bat. I’ll try to keep it between us. But y’know with the wedding…”

That’s when Batman lets out a sharp whistle which puts the Poison Ivy controlled Superman into intense pain. Poison Ivy had to focus Superman’s hearing in order to hear what Batman and Catwoman were whispering to each other. It was her fatal mistake. 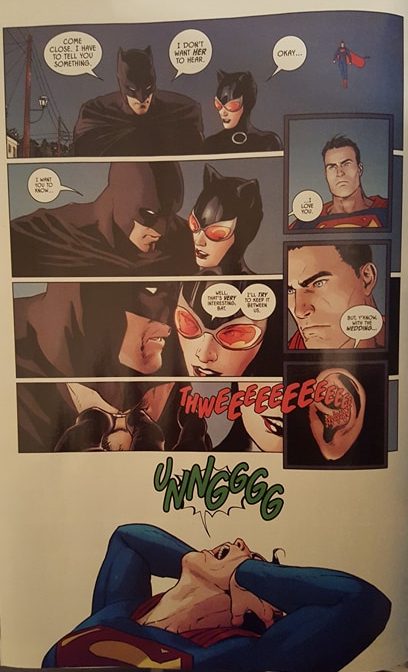 In fact, Batman admits Superman would never have made that mistake himself. “Not Superman. Clark knows when to listen and when not to listen.”

And that’s just another way Batman is able to get one over on Superman even if Superman would never fall for such a trick.

Do you like the way Batman outsmarts Poison Ivy?

Batman #42 by Tom King, Mikel Janin, and June Chung is out this week! Pick it up to see how Batman and Catwoman confront Poison Ivy. The odds are stacked against them, will they be able to worm themselves out of this pickle?