“Tell me who Batman is.”

What is Gotham? It’s a difficult question. The easy answer is a fictional city in the DC Universe based on larger, more criminally-associated cities like Chicago and New York. Another answer is it’s a society of people haunted by evil and protected by darkness. Unfortunately, it means things in Gotham are always dark and gloomy. But with a reformed Joker turning Gotham against Batman in Batman: White Knight, the tables have turned. What once was justice now seems like vigilantism. Someone once a madman is now the person making the most sense.

Sean Gordon Murphy has created quite the story in his pages. Breathtaking art aside, he has more than proven himself a capable writer. This world is a perfect blend of comic and cinema, including Easter eggs that reference both worlds. It’s fun, interesting, dramatic, and so much more. Murphy has worked with some of the best writers in the business. Why? Because he is, without a doubt, one of the best artists in the business. Some of his works are the best of all time. 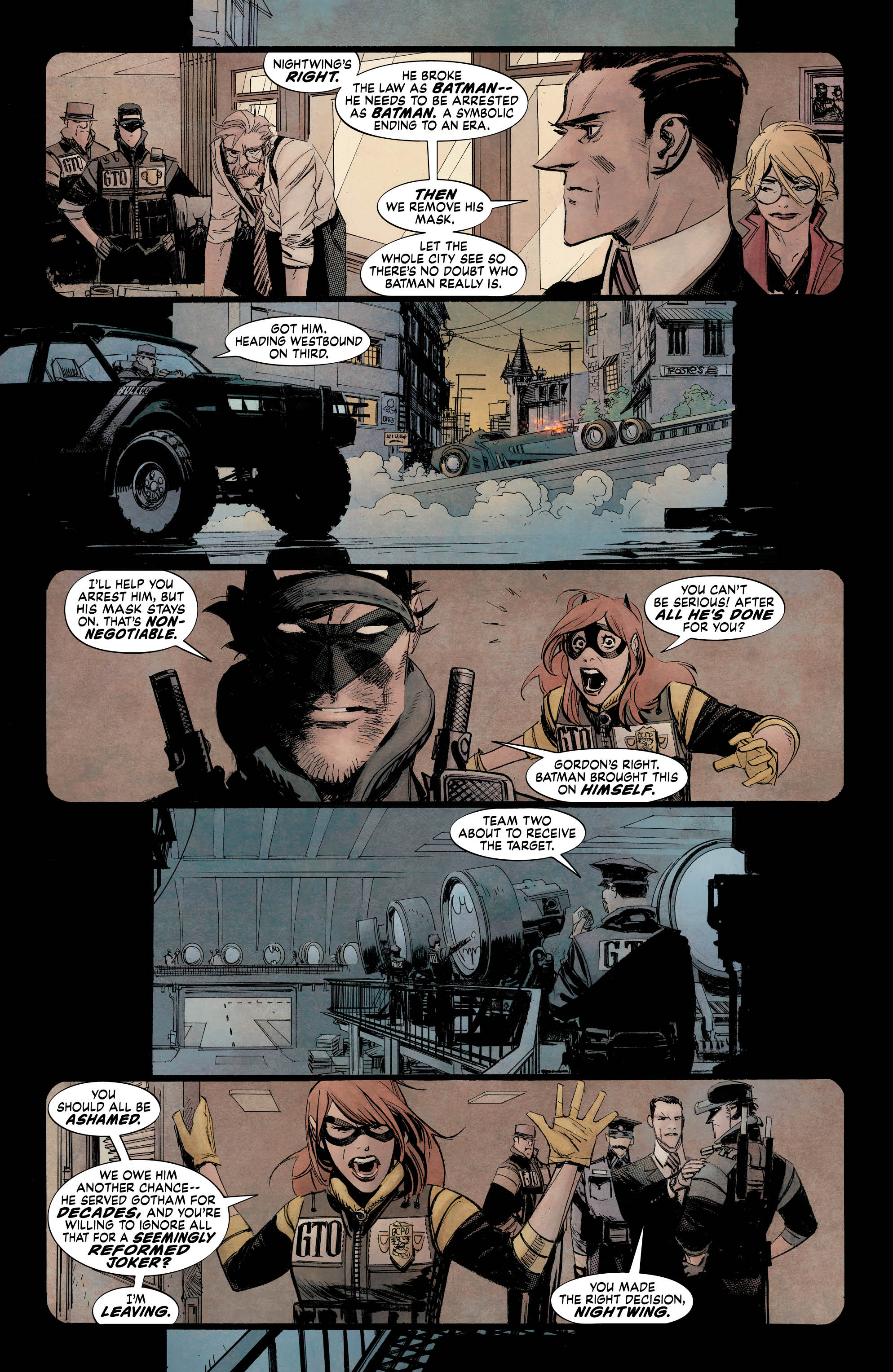 Unfortunately, he’s not the kind of artist to work on any one series for a long period time. In just the past couple of years he’s worked on The Wake, Tokyo Ghost, Chrononauts, and some wonderful single-issue works here and there. It’s an intimidating catalog of works. And now, thanks to great writing, solid action, and incredible art Batman: White Knight becomes another masterpiece by Sean Gordon Murphy.

“He’s onto us, everyone get ready.”

Batman isn’t around much in Batman: White Knight #6. However, he has everyone’s attention. A few members of the Batfamily are “helping” Gordon capture Batman. Unfortunately, the destruction in the Batmobile’s wake doesn’t make a good case for Gotham’s Dark Knight. Jack Napier has everyone on his side, including the original Boy Wonder: Nightwing. That’s been the Joker’s greatest trick of all. Turning the city against its protector. 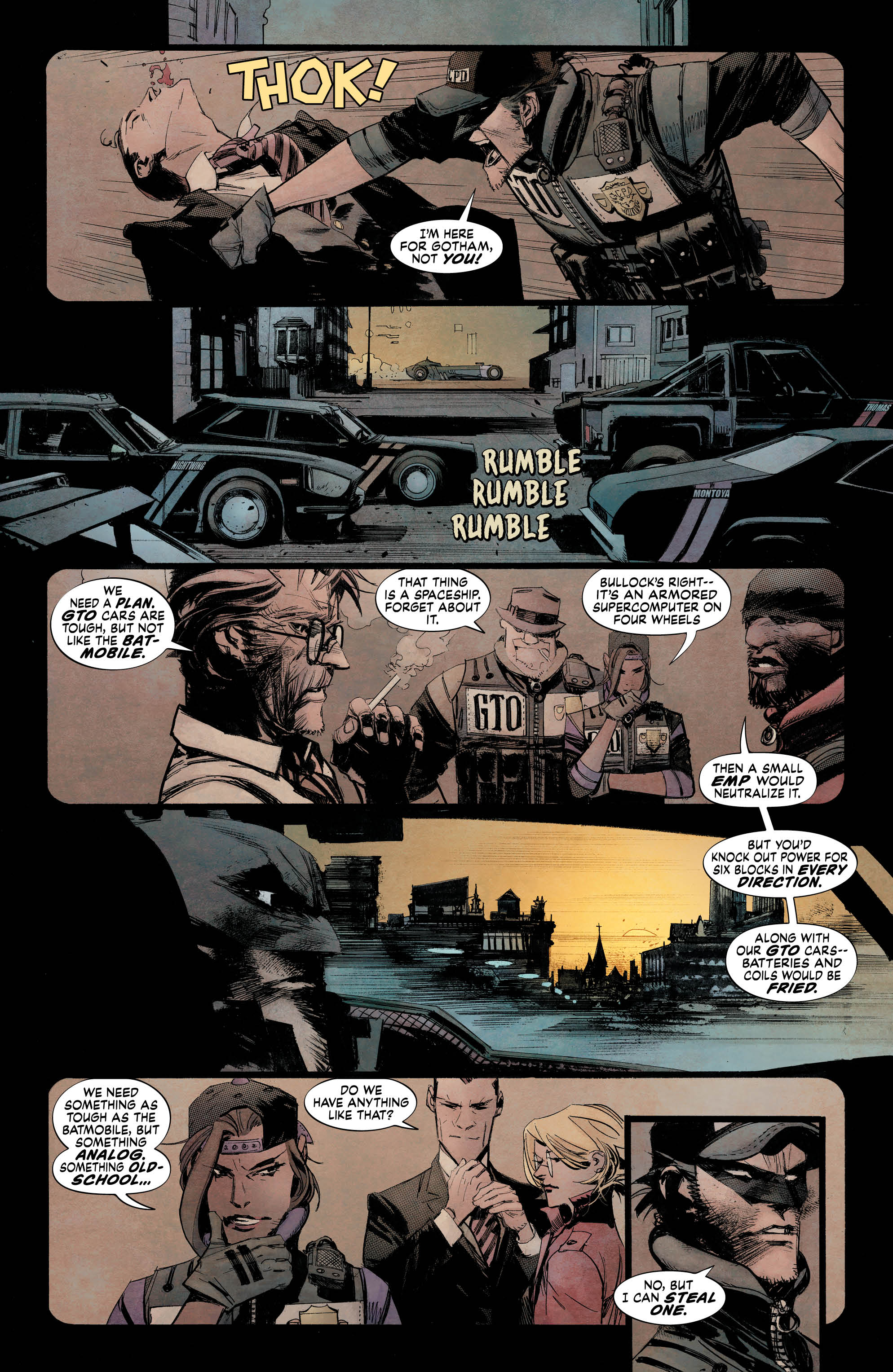 But there are still a few tricks up Murphy’s sleeve. Neo-Joker is wreaking havoc on the city, and there are still a few villains who could play a critical part in the story. That’s one of the best parts of Murphy’s take on the DC Underworld. You never know who or what will creep out of a dark panel and what form they will take. His reveal with the two Harley’s at the beginning of the series was one of the most unique touches to a comic in years. A commentary on the character and the multiple iterations she’s endured.

Batman: White Knight continues another story about a villain demonizing Batman in the eyes of Gotham. But this one is slightly different, in that they’re right. Batman’s system may not be the best to rehabilitate the criminals in Gotham, because it isn’t working. But by pointing that out, by showing the entire world what trusting Batman’s methods could lead to, Joker has played his worst prank of all.

“He’ll…He’ll always be… the Joker. You know that.”

Murphy has some sort of secret he’s unwilling to share with every artist around. His lines work a sort of magic that isn’t found in any other comic on the shelves. The shading can be a mix of beautiful texted or simple sketch-lines. Every piece of anatomy is perfectly proportioned and uniquely his own. The style is just unbeatable. Murphy and Greg Capullo have carved out their own completely distinct versions of the DC Universe. When either of those artists creates or interprets a character it’s unmistakably their’s. An undeniable signature style. 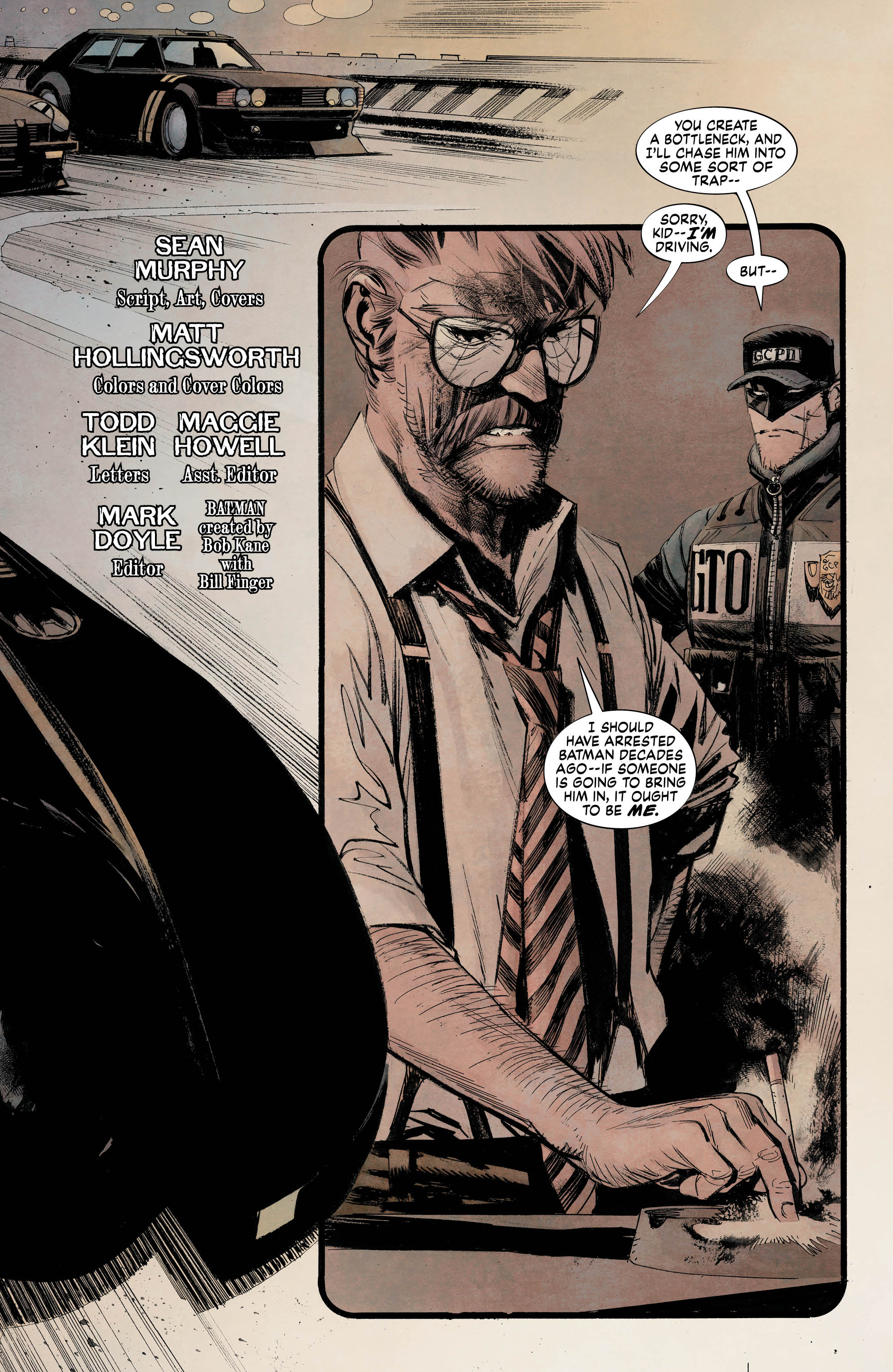 Sean Gordon Murphy doesn’t lend his particular talent out to just any world. He saves it mostly for the streets of Gotham. Because his are some of the deepest, darkest and richest streets around. No matter how polluted or crime-ridden they are, the streets are always luscious and gothic. Matt Hollingsworth is one of the best colorists in the business. Like Jordie Bellaire and FCO Plascencia he gives every Batman book he works on a unique touch with a never-ending landscape of dark hues.

Batman: White Knight #6 has a few twists and turns. They aren’t the most shocking of the series, but Sean Gordon Murphy is a good storyteller. He knows that comics need certain beats. Having a necessity to force readers to turn the page and then to buy the next issue. Batman: White Knight #6 will make you want to buy the next issue. It will make you want to buy the issue after that, the eventual trade and hardcover, and any other story Murphy chooses to tell in the DC Universe.

The world of Gotham is unraveling. Even the recently renovated psyche of Jack Napier. As Batman flees police across town, the police are willing to utilize every resource to take the man down. The Batfamily, Jim Gordon, and Jack Napier all set out to bring down the Batman. And eventually they did.

But his descent started in the very first issue. It started whenever the Joker thought of this most devious plan. Of slowly turning Gotham against not just Batman, but his very methods. It’s a great plan; he’s succeeding. But as Batman runs out of tricks, Gotham is starting to become disgusted with itself. Even Jack Napier, the former Joker, can’t stand the sight of the broken Batman. It’s an evocative feeling to get from a limited issue comic. To know that the Caped Crusader is truly alone and without his greatest asset: his city.

Sean Gordon Murphy creates one of the most beautiful Gotham City’s in comic history. He’s equally talented at writing the chaos that is ripping it apart.