In Marvel 2 in One #4 by Chip Zdarsky and artist Valerio Schiti, Reed and Sue Richards are missing along with their kids, but Reed has left a way for the Thing and the Human Torch to find them. It’s a device called the Multisect that allows them to access the Marvel multiverse. In order to find their missing compatriots, they’ve teamed up with a scientist named Rachna.

Rachna activates the Multisect device and she, the Human Torch, and the Thing traverse the Marvel multiverse and locate a planet with a high signal that could indicate the location of Reed and Sue Richards. When they arrive on this new Earth things appear normal, but once they actually come face to face with the Reed Richards of this Earth, they realize just how different this universe is compared to the one they are from.

A drastic shift happened when Galactus came to devour the Earth. The Thing rushed into battle and was instantly destroyed. Reed Richards then attempted to take on Galactus, but he was unable to. He failed to defeated the devourer.

Cue Doctor Doom. He used knowledge he acquired from the alien race known as The Ovoids to defeat Galactus. However, he didn’t technically defeat Galactus. No, he “took over the body of Galactus, saving Earth.” However, while Doctor Doom is now insanely powerful, he promised he would not destroy Earth. After all, he wanted to rule it. “He addressed us all every last citizen of our endangered planet and swore he would never succumb to devouring it the way Galactus attempted.”

The idea that Doctor Doom was now Galactus and Ben Grimm was dead, broke Reed Richards. “Reed never really recovered. His greatest enemy with the ultimate power, his best friend dead in a flash.” 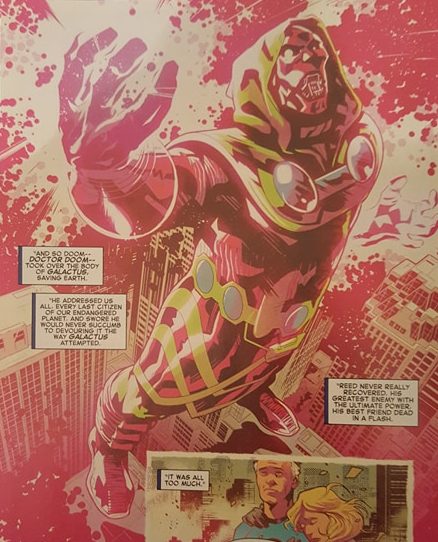 That’s right Doctor Doom has literally become Galactus and is now an even bigger threat than he’s ever been before. And now this insanely, powerful being could now threaten the main Marvel Universe with Rachna, the Human Torch, and the Thing bringing the Multisect to this new Doom Universe!