“…I, on the other hand, like my plans less vague.”

Trinity #19 is strikingly different from the beginning of the series. James Robinson’s run is a different kind of comic than the previous work by Francis Manapul. But that’s not necessarily a bad thing. The core idea of the Trinity title is to tell stories relating to the trio of Batman, Superman, and Wonder Woman. That’s it. There’s no set precedent to maintain. The stories Manapul decided to tell were emotional de-constructions of the characters. Trinity #19 is more traditional fun.

Wonder Woman is no stranger to the battlefield. As a born-and-bred warrior she excels when fighting her foes. Trinity #19 compares her attitudes with that of the other members of the trio. But that’s just a small part of Robinson’s story. This is a true fantasy comic book. DC’s Trinity are aiding The Warlord and his daughter, Jennifer Morgan. The former character was created way back in 1975. Another instance of a DC writer bringing back ancient history in a fun and interesting way.

Artist Jack Herbert helps to bring the classic script to life. The pencils are sharp and the shadows are bold and captivating. The pages almost have an 80’s and 90’s feel but without seeming antiquated or dated. This is how nods to the past are done. Trinity #19 isn’t a perfect comic, but it’s a damn good time. 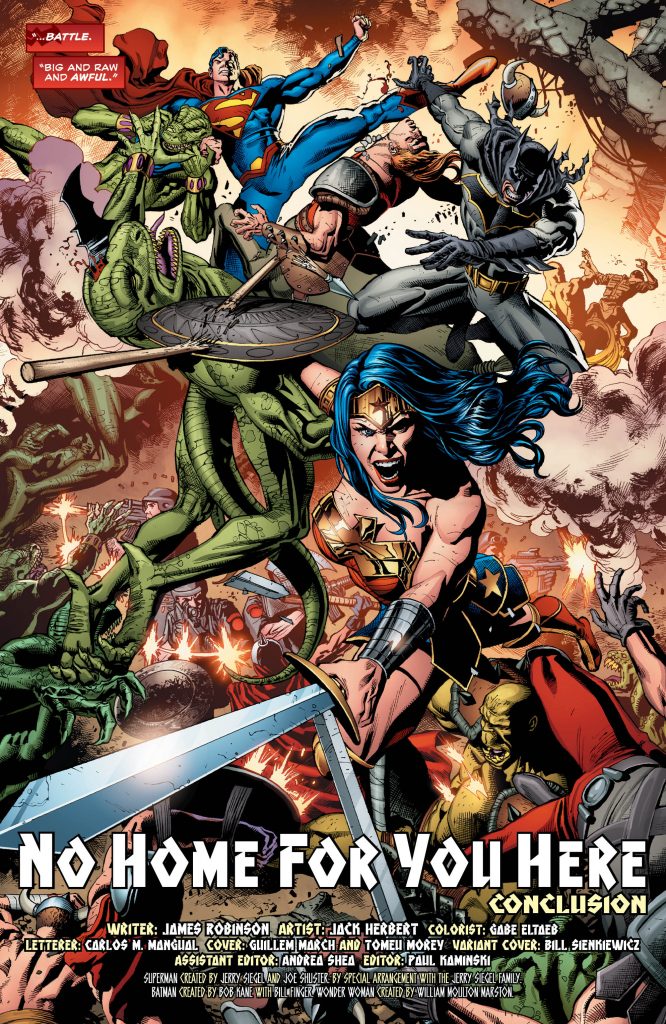 That’s how James Robinson decides to depicts his battlefields. It’s a smart way to juxtapose the relatively peaceful upbringings of Bruce Wayne and Clark Kent with that of Diana. Yes, they still contained tragedy and heartbreak. But there’s something about having to kill and kill and kill. To defeat. That’s the test all three warriors have been put through in the pages of Trinity.

Interrogations and interviews are often used as narrative bookends in every kind of story. From movies to comics to traditional books. Steve Trevor questions the Trinity about what happened to them in Skartaris. It can seem a little cliche until the intention becomes clear. It’s a writing technique that Tom King is also employing in the pages of Batman. Telling similar stories with different heroes to demonstrate their differences. It can feel a little tired at times but for the most part Robinson takes special care to show how even the likes of Superman and Batman can be damaged by a long and desperate fight.

But that’s not the case with Wonder Woman. As the central character for this arc she shows just how unrelenting she can be on the field of battle. But near the end of the comic, that unrelenting nature turns into a great surprise for this Steve Trevor. A nice little twist that serves as an exciting opening to the next arc. 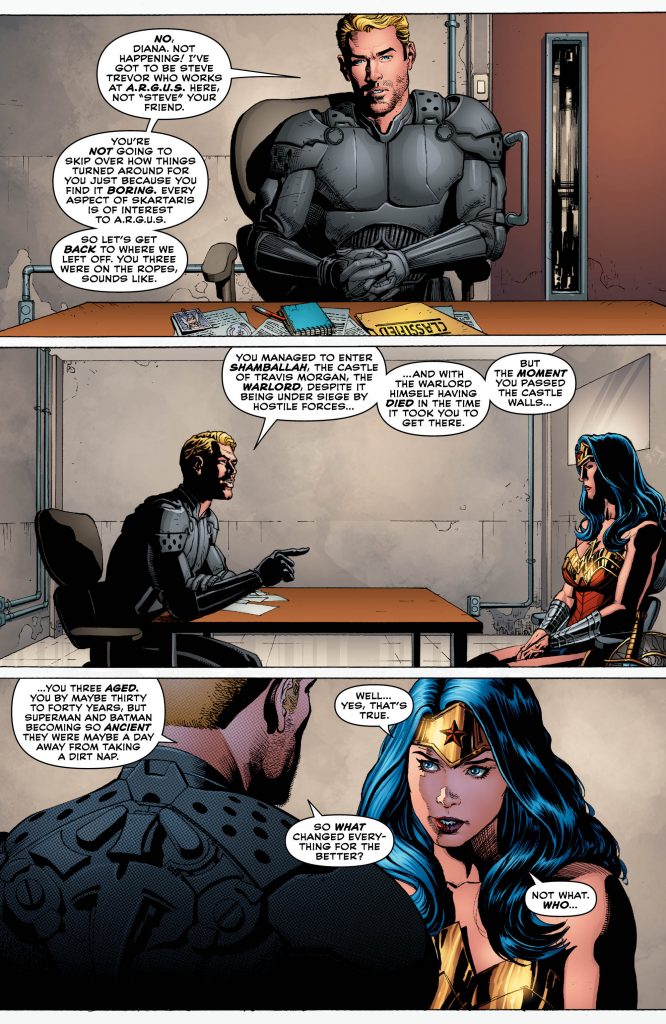 “There, you’re back to the way you were.”

Jack Herbert’s work is very similar to that of Ivan Reis and Eddy Barrows. That’s wonderful news and a reason to pick up the comic. These are classic interpretations of the characters that don’t embellish muscles or make anything look ridiculous. Some of the character models can look a little rigid; some of the facial expressions can look a little stiff. But when Herbert is focusing on an awesome battle scene or sequence, everything looks great.

Skartaris looks like the fantasy worlds that graced the covers of old classic novels. Barbarians fighting man-sized lizards around the likes of castles and wizards. It sounds ridiculous and it is ridiculous. But that’s what comics are for! The story looks great and bright with lively colors from Gabe Eltaeb. Together the two take Trinity to a wonderful new version of a lesser-known side of the DC Universe.

Batman, Superman, and Wonder Woman are an unstoppable team themselves. Not only that, they’re the flagship characters of one of the two biggest comic book publishers ever. That’s important. That’s why fans want to read stories featuring all three of the characters, which can be difficult to write. Some writers struggle to find a reason to keep the heroes together, some writers capitalize and are able to tell better stories because of it. Though it’s not without its kinks, Trinity #19 is an entertaining tale for our three heroes. Writer James Robinson uses their presence as an opportunity to compare the heroes to each other; to show readers some of the differences between the famous Trinity.

Wonder Woman’s warrior nature becomes the most explored detail of the comic as the Trinity battle the forces of the wizard Deimos. Unfortunately, some of the story elements are a little tired. Something that comes with the territory when telling stories featuring Bronze-Age characters.

The pages look wonderful thanks to the work of artist Jack Herbert and Gabe Eltaeb. Somehow bridging the worlds of barbarians and wizards with Batman and Superman. And managing to make it look fantastic. While some of the figures and faces look a little off, it doesn’t hurt the fun. Trinity #19 is another fun story in the never-ending tales of Batman, Superman, and Wonder Woman.