“All hail, Rath! Lord of Atlantis!”

Villains have been having a great time at DC Comics lately. Poison Ivy took control of the world. The Dark Knights have nearly destroyed the entire DC Multiverse in one of the coolest event comics in years. And Rath became King of Atlantis after usurping Arthur’s throne. Aquaman is now leading a rebellion against his very own nation. Hopefully, so that he can once more create stability in his own Kingdom.

But Arthur isn’t the star of this story. Writer Dan Abnett has decided to sideline him for a while. Instead this is Rath’s story. His motivations become clear and so do his allies. Readers are treated to an awesome splendor of evil magic and wicked villains. In a way, that makes the story much more exciting. Abnett takes a trip from the usual valiance of our hero to watch someone evil get up to no good. Rath describes his upbringing and place within Atlantean society, seething with anger. He’s been plotting his revenge for a long time. Now he’s reveling in it. 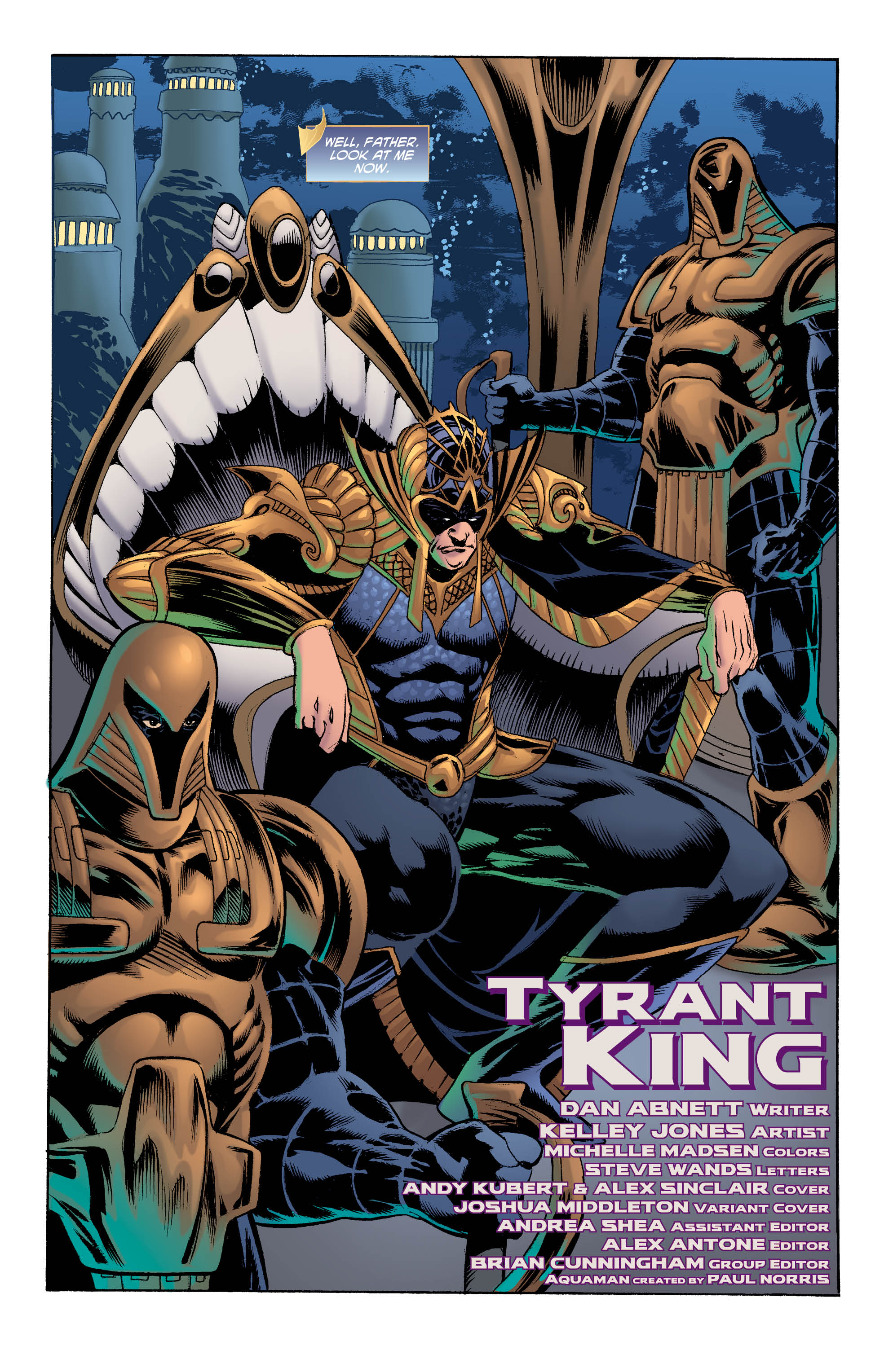 Kelley Jones was the perfect artist for this run on the Aquaman series. His dark, shadowy perspective on comics has been an asset to villains and magical heroes alike. Painting them as large Gothic portraits that can fill an entire page, or get lost in a massive landscape. While some of the figures aren’t perfect, the style perfectly compliments the script. Aquaman #34 is a great story in the chapter of Arthur, even if it stars his enemy.

“Toil makes you stronger, and it makes Atlantis stronger.”

Aquaman #34 is the story of the “Tyrant King.” Rath gets some much-needed backstory that sheds some light on the dark aspects of Atlantean society. The lives of slavery. Because that’s what Rath was. A slave who toiled with his Father to build Atlantis from the bottom up. His Father was a proud man, but an angry man. The kind of man who would hit a child for dropping a stone. Unsurprisingly, that child grew up to hit back.

Writer Dan Abnett paints a wonderful portrait of Rath with this backstory. Aquaman #34 is one of the most interesting issues in his run so far, simply because it doesn’t include the titular character. Rath takes center stage and rightfully so. He is King. But more importantly Abnett brings back a fan-favorite Atlantean who’s capable of some awful magic: Kadaver. 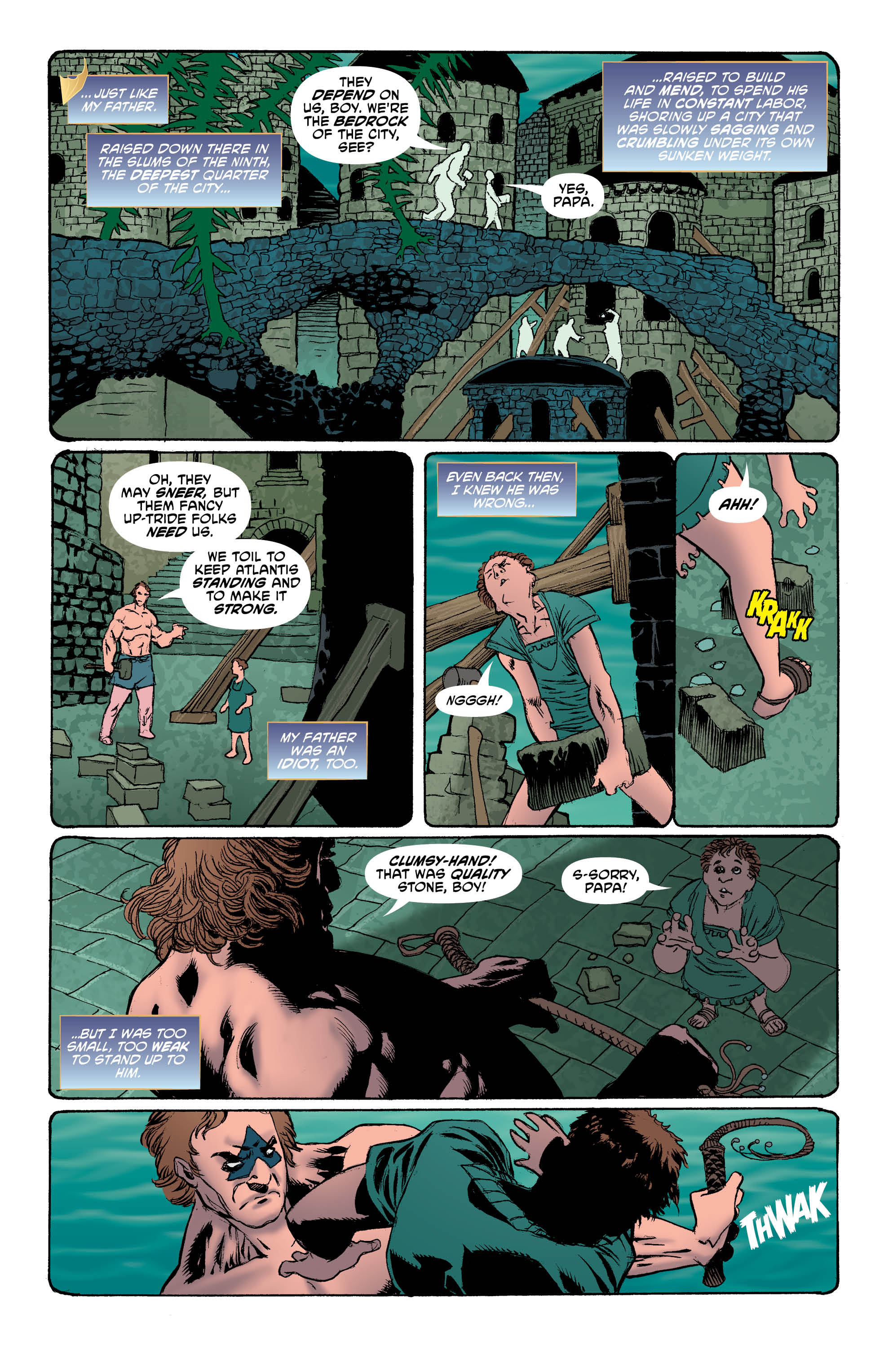 While the downfall of Arthur isn’t assured, things aren’t looking good. The magic Kadaver is capable of is put to terrible use in this issue. Demonstrating to Rath and to readers how powerful he really is. By making Rath, Kadaver and his new Kingdom so powerful, Abnett has started a great story for Arthur. The King will need to overcome some of his toughest obstacles yet if he’s going to take back his Throne. But knowing the rightful King of Atlantis, nothing is going to stop him.

“I’ve come so far to wield this power.”

Kelley Jones is not your typical Aquaman artist. In fact, he’s more famous for more horror-oriented characters like Swamp Thing or Vampire Batman. But here he is creating the world of Atlantis. It looks dark, dreary and incredible. While most artists take advantage of the flourishes of waves and water, Jones instead focuses on landscape and architecture. His Atlantis looks like the ocean floor. Like a Kingdom built by the hands of hardened and powerful people: sometimes crude and sometimes elegant.

Some of the figures seem a little rushed, but it doesn’t take away from the fun. It only becomes noticeable when being compared against the beauty of the other pages. Michelle Madsen provides colors on this issue, and she does so beautifully. Even though the entire story takes place under the ocean, readers will believe there are stars in the sky. She’s especially skilled at capturing the exciting and frightening magic. Something Kelley Jones is equally talented in. 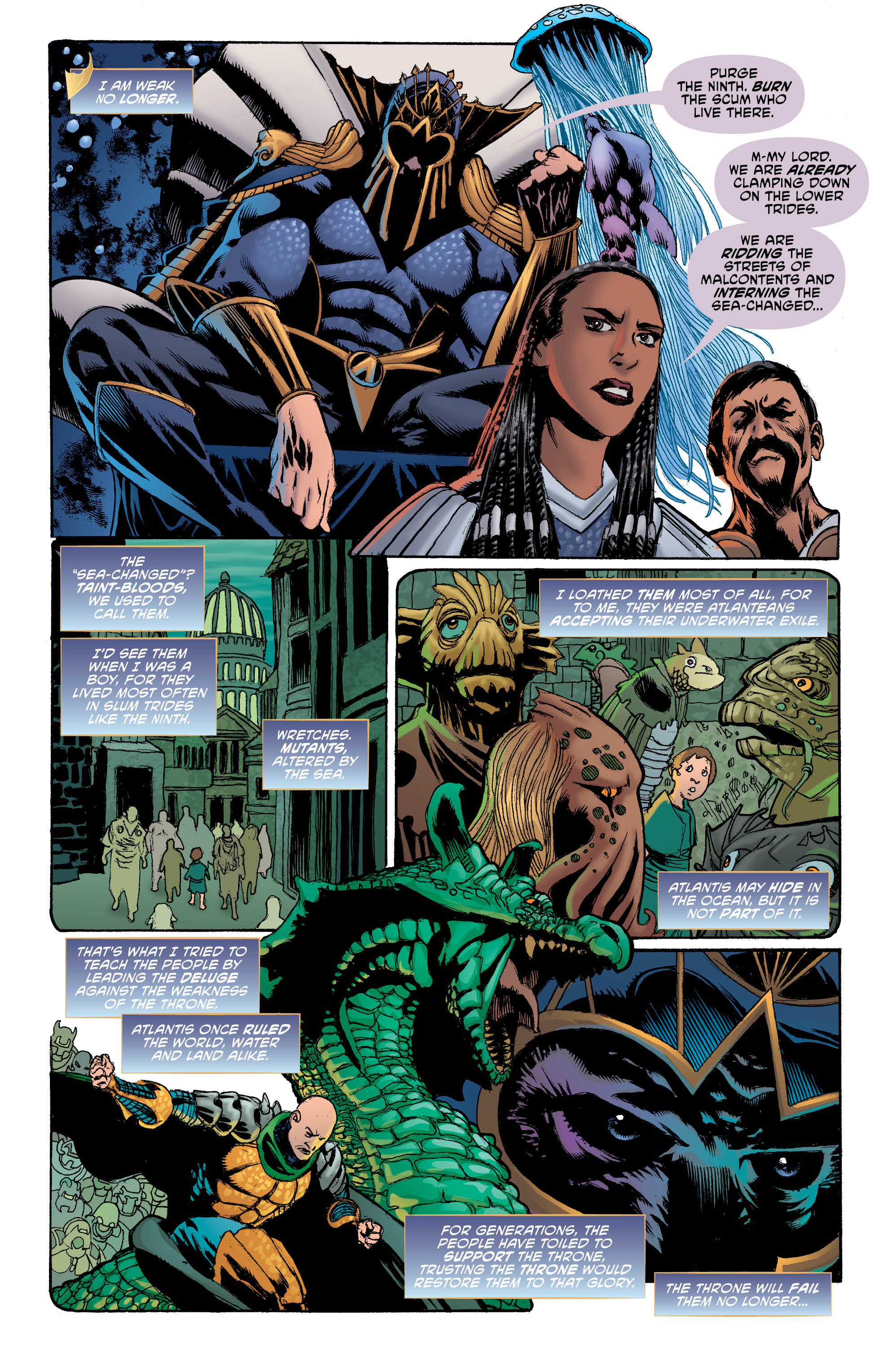 If Dan Abnett decides to keep telling more haunting stories beneath the waves, let Kelley Jones be the artist to bring the pages to life.

Arthur Curry isn’t doing so well right now. He’s not the King of Atlantis; Mera is away on-land while he is at sea. And his enemy Rath sits upon his throne. Rath threatens to destroy the Atlantis he loves so much. But to tell this story in the best way, writer Dan Abnett decided Arthur can’t be the main character. That’s where Rath comes in. The former Atlantean slave has been plotting his revenge for awhile, and it’s only beginning. Bringing the Atlantean Magician Kadaver into the story was another great addition made all the better by the artist behind the pages.

Kelley Jones is one of the most unique artists in the business. His distinct style makes as much use of shadow as light. Some figures can occasionally look misshapen against his more elaborate designs, but it doesn’t affect the overall tone. His style elevates the darkness and somehow elevates the story simply because it stars a villain instead of a hero. Jones and colorist Michelle Madsen, know just how to bringing the dark to light and make it interesting.

Aquaman #34 sets up an uphill battle for Arthur. Rath and Kadaver are powerful beings who are more than prepared for a long and difficult fight. Hopefully, so is Aquaman.