The Terrifics seem like an odd pair, but they got off to a great start. When you have writer Jeff Lemire and artist Ivan Reis on the team, chances are the reader will end up with a great comic. But, as can be expected with almost every Ivan Reis series, the artist has already been replaced – and his absence is felt. The Terrifics #3 just isn’t terrific without him. But that isn’t the only problem.

For three issues now The Terrifics have been trying to answer the same two questions about why they’re together, and just who Tom Strong is. Simple and interesting enough. But now, after three issues, the team is still no closer to finding any answers. Not only that, most of the story beats are centered around asking the same questions. The end to The Terrifics #3 is literally the same “cliffhanger” as the first issue. Asking the reader the same question that has been asked since the very beginning. 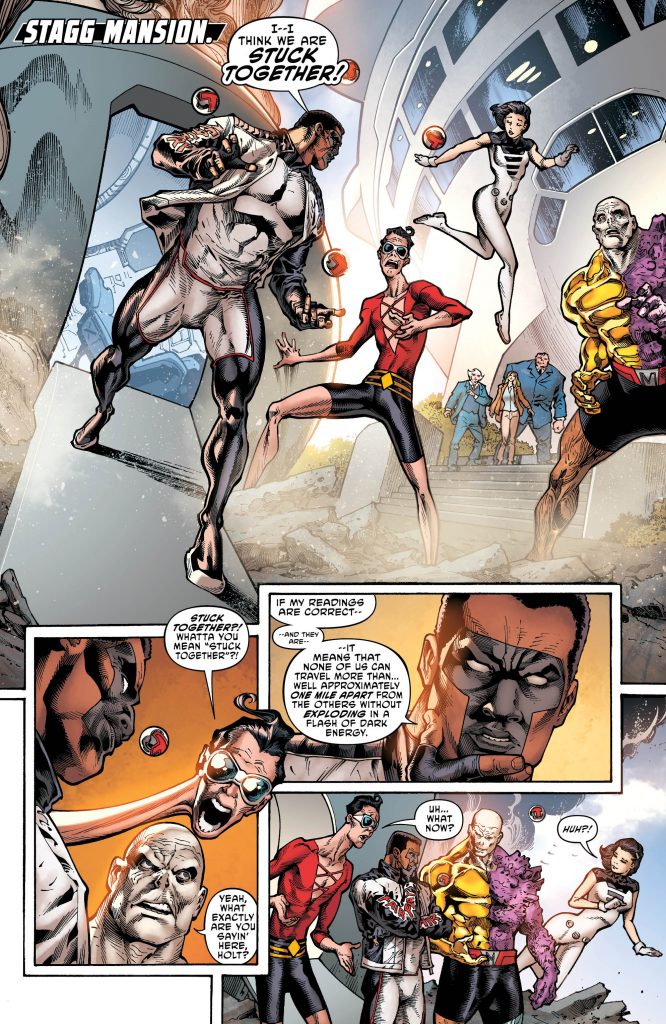 The artist joining Jeff Lemire for the conclusion of the arc, “Meet the Terrifics,” is Joe Bennett. His work is solid, with a plethora of detail and attention placed on the action. But it doesn’t resemble Reis’ art in the slightest. Jose Luis was a perfect companion to Reis on issue #2, but there’s no consistency here. Unfortunately, The Terrifics #3 is a slight downturn in what has been an exciting series. Hopefully, this team can correct their course in the nick of time.

“You mean I’m stuck with these bozos?” 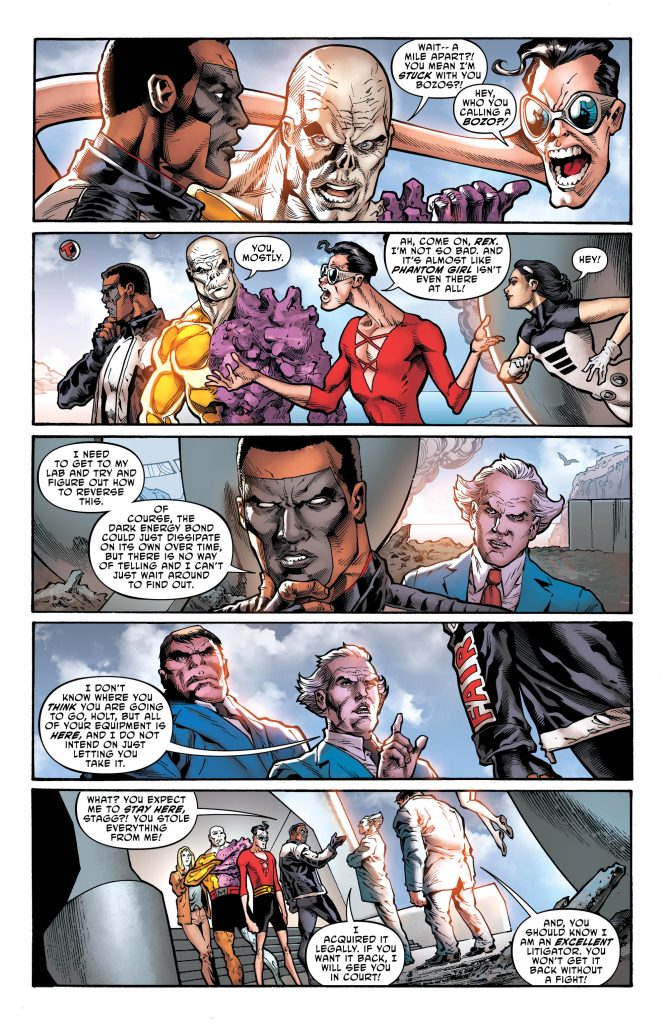 The exchanges and dialogue are legitimately funny. No one would have ever though that Plastic Man and Metamorpho would have such great chemistry, but Jeff Lemire makes it work. The team itself is already a joy to read. So why must they still dwell on why they’re stuck together? Or, why not just dive into the adventure to find out how? Instead, the team spends the entire issue asking themselves the same questions and not seeking any answers.

“Woo-hoo, you guys should see this place!”

The art in the issue is both one of the highlights and one of the problems. The only massive problem is the fact that Joe Bennett’s art is great, but doesn’t resemble that of Ivan Reis’ in the slightest. Anyone who’s been a fan of the artist knows that this often comes with one of his series, but it’s only the third issue. However, Bennett’s art is great. Accentuating the comedy that Jeff Lemire is so good at writing. In fact, Bennett’s art might be better suited for the title considering just how funny it is. But never the less, Reis is missed. 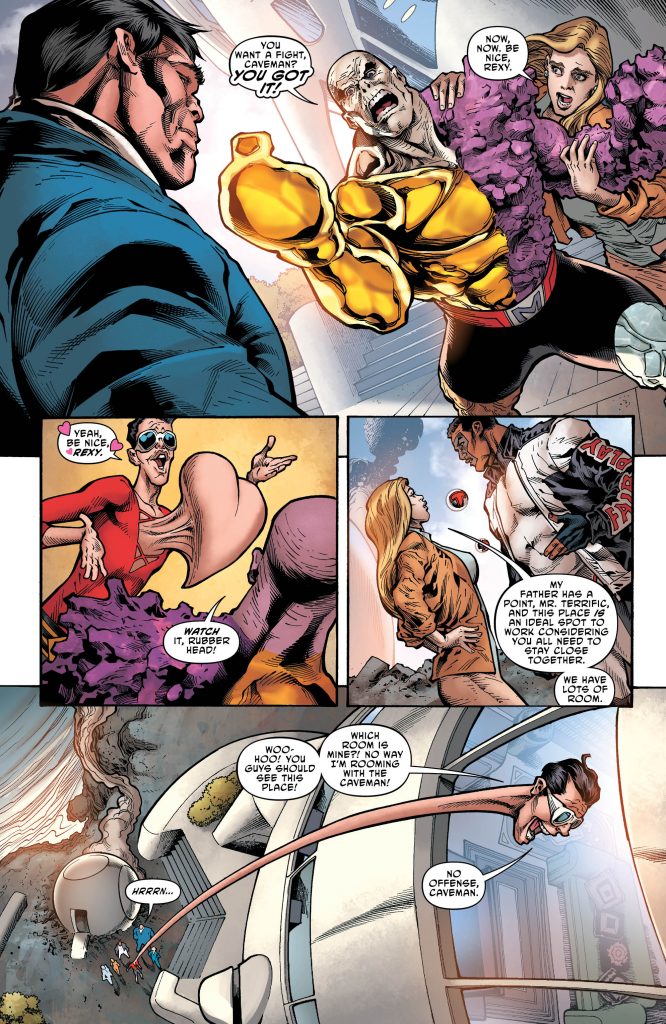 Bennett is joined by inkers Sandra Hope, Jaime Mendoza, and Art Thibert. Some of the best inkers in the entire business. Once again, it shows. The action is crisp and clear and the panels are interesting and very well-framed. It can’t be easy to make Plastic Man look good in any of his funny positions, but this team makes it look funny and just plain awesome.

Marcelo Maiolo’s colors may be the high point of the entire issue. Truly a testament to just how much every panel and figure comes to life. The shading and sunshine are captivating on every page. This isn’t Ivan Reis, but The Terrifics are still looking pretty good.

After a great start, The Terrifics #3 is definitely a setback. Not only does the story not move forward, but the issue doesn’t have the same feel as the previous issues. That’s due to new artist Joe Bennett, whose work is still one of the best aspects of the issue. He and his team of inkers make every panel and character look as humorous or exciting as writer Jeff Lemire wants them to be. However, the last two issues had such a consistent tone under the watchful eye of Ivan Reis that it was going to disappoint no matter what artist was behind this issue.

Almost taking a queue from his absence, the story doesn’t move forward in the slightest. The characters are still asking the same questions. Forgetting that they’ve been asking those same questions for three issues now. But the reader is certainly going to remember by the end of the issue considering they have all ended with the same cliffhanger. Couple that with a different artist, and The Terrifics #3 feels like a filler issue. Purposefully written to fill the gap between two other stories. That might be the case.

Nevertheless, there is still fun to be found in these pages. Thanks to great art and a funny script, The Terrifics still deserve to be a team and a series. But it’s time to get to the point, already.