Shiach’s targeting is based on a narrative pushed by cartoonist Tess Fowler back in 2013. Fowler accused comic book writer Brian Wood of sexual harassment at a comic convention from years back. Wood is a veteran in the comic book industry having written DMZ, Briggs Land, Rebels, and more. Fowler claimed that Wood feigned interest in one of her projects in order to get her to his room at San Diego Comic Con.

Tess went on to say that she refused his advances, Brian Wood become angry, and became verbally abusive towards her and her hobby of cosplaying.

@royalboiler career. The same guy who ran off my friends mid conversation to get to me, then left me with his room number and told me he’d

@royalboiler be waiting to get to know me better. Then the next day when I walked by the booth with friends he shouted at me in front of 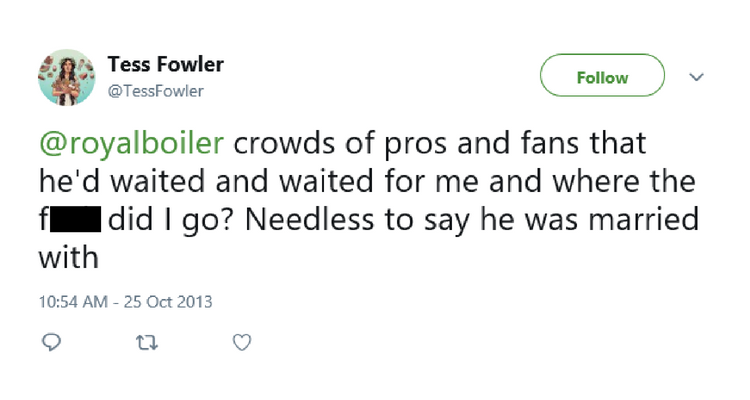 @royalboiler a pregnant wife at the time. I was young, naive and hopeful. But not THAT naive. Later we talked on Facebook and he made

@royalboiler fun of my art, letting me know he had never had any interest in it to begin with. He was mad that I’d been afraid of him.

@royalboiler At the time I liked to costume. He told me I should be thankful he was talking to me & that he’d overlooked me dressing (cont)

@royalboiler up like an idiot. I look at his career and the way he’s touted as a feminist and I cringe. I am not the only woman who has

@royalboiler had a run in with him either.

@royalboiler Kudos to you for speaking openly and honestly. Mad respect.

Brian Wood released a statement about the accusation. He describes a very different set of events:

For the last couple weeks I’ve been accused of a lot of very serious things. I feel I have to speak up for myself and for my friends and colleagues who are finding themselves under a sort of scrutiny they don’t deserve. This situation has reached the point where it is affecting people who in no way deserve it, up to and including my family.

Tess Fowler is correct about this: I did make a pass at her at [the San Diego Comic-Con] Hyatt bar roughly 8 years ago. But when she declined, that was the conclusion of the matter for me. There was never a promise of quid pro quo, no exertion of power, no threats, and no revenge. This was at a time in my career when I had very little professional power or industry recognition. The pickup was a lame move, absolutely, and I’ll accept the heat for having done it, but that’s all it was: I liked her, I took a chance, and was shot down. I immediately regretted it, and I apologize to Ms. Fowler for the tackiness and embarrassment of it all.

I’ve kept quiet for these last couple weeks because this is a problematic thing to address without unintended blowback. While I believe she is as incorrect as she can be about what my intent and motivations were, I don’t want to encourage any negative opinion directed back at her.

I think the larger issues of abuse in the comics industry are genuine and I share everyone’s concerns. As a father to a young daughter showing an interest in making her own comics, I do really care about this stuff. So I don’t want our difference of accounts to take attention away from that industry-wide discussion that needs to happen.

Since then things have settled down for Brian. Currently he has been working and writing new comics including The Black Road at Image Comics and Briggs Land: Lone Wolves at Dark Horse Comics.

However, a recent ComiXology sale for Brian Wood’s titles triggered our old friend Kieran Shiach.  Shiach advocated for ComiXology to make it more difficult for Brian Wood to make money off his comics in a similar manner to “Spotify’s new practices and stop curating content featuring abusers.”

hey remember when Brian Wood sexually harassed someone in a hotel bar under the pretence of helping their career?

Spotify recently made a change in their policy targeting R&B star R. Kelly. R. Kelly was brought to trial and acquitted on all charges after he was accused of participating in child pornography. He’s also been accused of running a sex cult, which has not been proven.

“We are removing R. Kelly’s music from all Spotify owned and operated playlists and algorithmic recommendations such as Discover Weekly. His music will still be available on the service, but Spotify will not actively promote it. We don’t censor content because of an artist’s or creator’s behavior, but we want our editorial decisions — what we choose to program — to reflect our values. When an artist or creator does something that is especially harmful or hateful, it may affect the ways we work with or support that artist or creator.”

This isn’t the first time that Kieran Shiach has taken out time from his busy day to target creators and their livelihoods. He’s gone after Richard Meyer, best known for his YouTube channel Diversity & Comics.

If that isn’t enough, between ranting against Meyer and Van Sciver, he also launched a crusade against upcoming Captain America cover artist and American Flagg! creator Howard Chaykin.

Kieran Shiach tries to use his platform to run well-respected comic book professionals out of the industry and he uses misinformation, lies, and deceit to do it. It’s more than likely he will target someone else, but we’ll be here to expose his antics.

**Editor’s Note: Tess Fowler had previously posted a message that forgave Brian Wood and asked that he not be boycotted.**

“I’ve forgiven Brian years ago for the following story. My eventual anger was due to the accounts being given to me as a result of the Bleeding Cool article. I’ve moved on from what he did. And I don’t think there’s anything wrong with defending someone else on social media. My followers already knew the story. As did my husband and friends. (According to my inbox this is just a well known fact, and there’s nothing anyone can do about it.) I never asked for a boycott, or blacklisting, as I am being accused. I actually spoke very openly about the opposite. About this being a systemic problem in need of addressing. So let me be very frank in repeating what I said openly before.

Brian Wood has every right to be a part of comics. To make books and make a living unhindered. I believe that. I also believe his behavior is a symptom of a much bigger disease. A disease of silence, where you go along to get along. And you never say anything about your experiences because the harm to yourself and perhaps to others will be monumental. That’s not okay. And it has to change.”