That’s what fans have been doing for years now. Rocksteady should be a familiar name. They’re one of the best game developers out there, responsible for bringing the Batman: Arkham games to life. Those games also happen to be regarded as the best licensed games in the history of gaming, not to mention the best Batman video games ever. With good reason, it gives you the absolute power to be Batman. For years now, many have assumed their next project would be about Superman. Who wouldn’t want to fly around Metropolis with the powers of Big Blue? Well, a not-so-new rumor suggests that announcement could come sooner rather than later.

According to a recent post by ComicBook.com, a 4chan “leak” implies that Game Informer’s next cover story will be Rocksteady’s announcement. The 4chan post indicates the game will be announced at Microsoft’s E3 Conference and will feature game play on the Xbox One. It also indicates there will be a trailer showing Brainiac assaulting Metropolis with Superman being weakened from battle. The game play footage will allegedly showcase Superman flying and in combat. We are supposed to get to see Superman take out a number of Brainiac’s drones.

ComicBook.com didn’t provide a source to the 4chan post, and it appears to have been deleted.

However, a user in their comments section indicated the leak was accompanied by a “poster” which was actually a variant cover to Action Comics #1000 by Francesco Mattino. 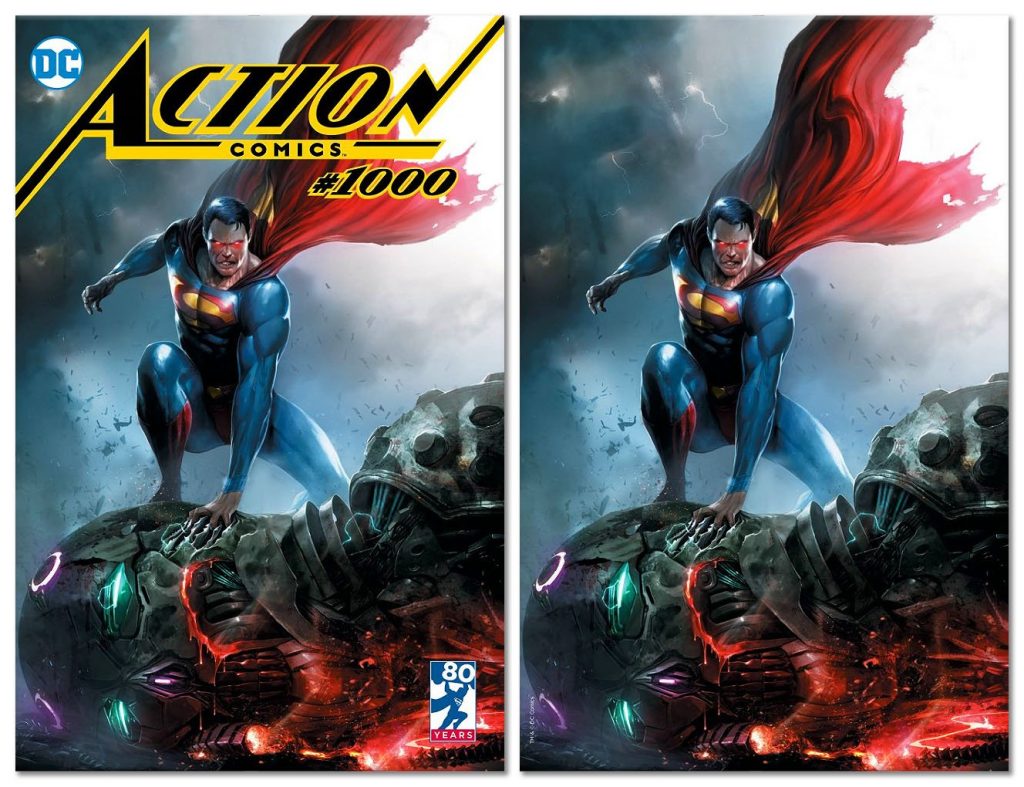 Not only that, this isn’t the first time a 4chan member has suggested the next issue of Game Informer would be about a Rocksteady Superman Game. A previous rumor also indicated the game would be unveiled on Game Informer. The editor of Game Informer actually addressed that rumor and denied it back in November. Unfortunately, this means that the story is to be taken with many grains of salt. A sad ending to one of the most highly-anticipated projects that doesn’t officially exist. But…

Make no mistake, Rocksteady is working on something. Warner Bros. Entertainment owns 75% of the video game developer, and fans went crazy for the Arkham Asylum games. They are literally the best superhero or licensed property-based games of all time. Only recently given a run for their money by titles like Shadow of Mordor. Rocksteady gave fans the opportunity to play as Batman and everyone loved it. They know what they’re doing.

It’s been three years since their last major release. They are officially done with Batman. The inevitable next step is to take one of the other big superheroes and fulfill the dreams of many. Superman is the obvious choice, but don’t be surprised if Rocksteady makes a surprise reveal. The last Son of Krypton isn’t the only member of the Justice League with incredible powers. What if Rocksteady’s next game were about Wonder Woman, Green Lantern, or the Flash? Or they could expand even further and include the entire Justice League. The movie didn’t do so hot, but that hasn’t stopped the Injustice series from taking the world by storm.

Rocksteady and Warner Bros. Entertainment are undoubtedly working on a game they know fans will want. This might not be the announcement fans have been waiting for, but that doesn’t mean it isn’t coming. Microsoft is going to have a massive presence at E3, who knows what they’ll announce?