Do we have a treat for you today! We got the pleasure of chatting with the exceptional Batman artist Kelley Jones about his upcoming new Batman series with Scott Peterson, Batman: Kings of Fear. Not only did Kelley give us some insight into what we can expect from Batman: Kings of Fear, but he also let us in on some other projects he’s working on including a Count Dooku Star Wars story and an exceptionally terrifying story for John Carpenter! And there’s much, much more. Hope you enjoy it as much as I did!

Bounding Into Comics (BIC): What’s it like working on Batman again?

Kelley Jones (KJ): Comfortable. I feel like Batman draws itself, the world he lives in lends itself to all kinds of different ways to exploit what makes comics great. Batman allows for the eccentricity and experimentation to flow, and that’s so fun.

BIC: Did you miss the character?

KJ: I missed the mystery of the book. I missed the range the book offers. You can always find something new with Batman/Bruce Wayne, but Batman is a rock, and though the decades pass by for readers, and our fads come and go, Batman still resonates. Batman doesn’t compromise on what he is, what is right or wrong, what he will and won’t do, and that he will never stop. Ever. 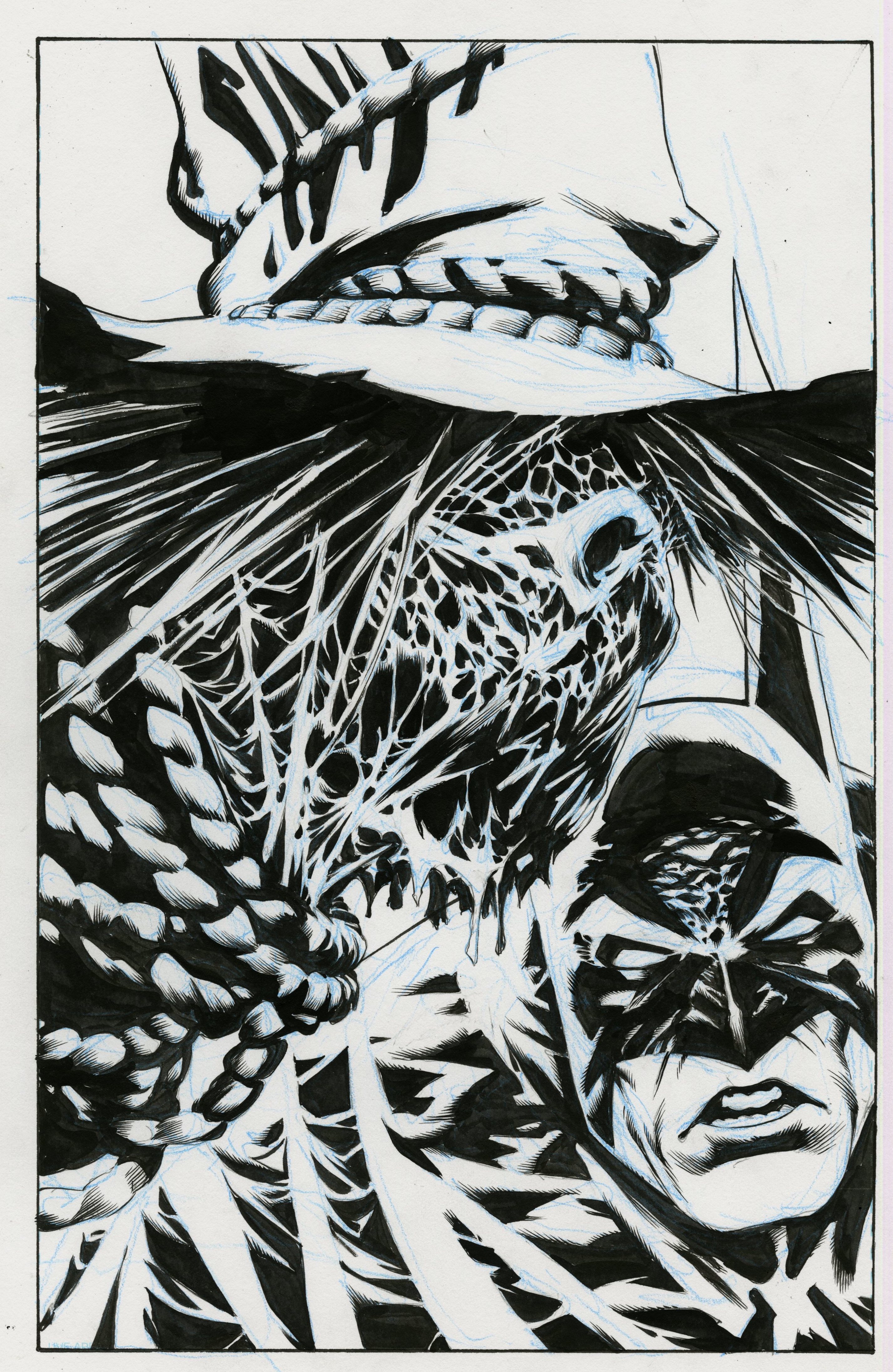 BIC: You’ve got a unique take on Batman, primarily the huge pointed ears. Is there a specific reason why you like to give him the huge ears?

KJ: Batman as I see him  is a terror to his adversaries and uncomfortable to be around for his few friends. He doesn’t appear to us on a sunny day or a well lit room to do his business. He doesn’t come to talk to you. He doesn’t negotiate. I try to make him look like that. Like something you don’t want to mess with, something that you aren’t quite sure what side he’s on much less if he’s even human. I draw him in a way that you would do what he says. He’s not grim to me, he’s merciless.

The cape and the ears are because he’s the shape of fear, not just a buff do-gooder. You don’t joke with Batman. You’d be crazy to, therefore the only ones who break that idea are all taken to Arkham Asylum.

BIC: The Scarecrow will be the primary villain in your upcoming story, Batman: Kings of Fear, what’s it like drawing him?

KJ: The Scarecrow is just wonderful. A vicious ‘Ray Bolger’ from the Wizard of Oz, who knows all your weak spots on top of his gruesome looks. If I could I’d do a villain series for DC just with the Rogues, their crimes and such, not their origins or anything. Just their evil plans realized, some fail…but some work! When Batman eventually comes into the story it would end cause we all know the bad guys would be done in at that point. But boy, a book like that would creep people out. No hero, just horror and mayhem!

BIC: That sounds super interesting. I would definitely be the first in line to read that. I’ve always wondered why there aren’t more solo villain stories.

KJ: Awww…no one would want to read it but us failed evil doers…. 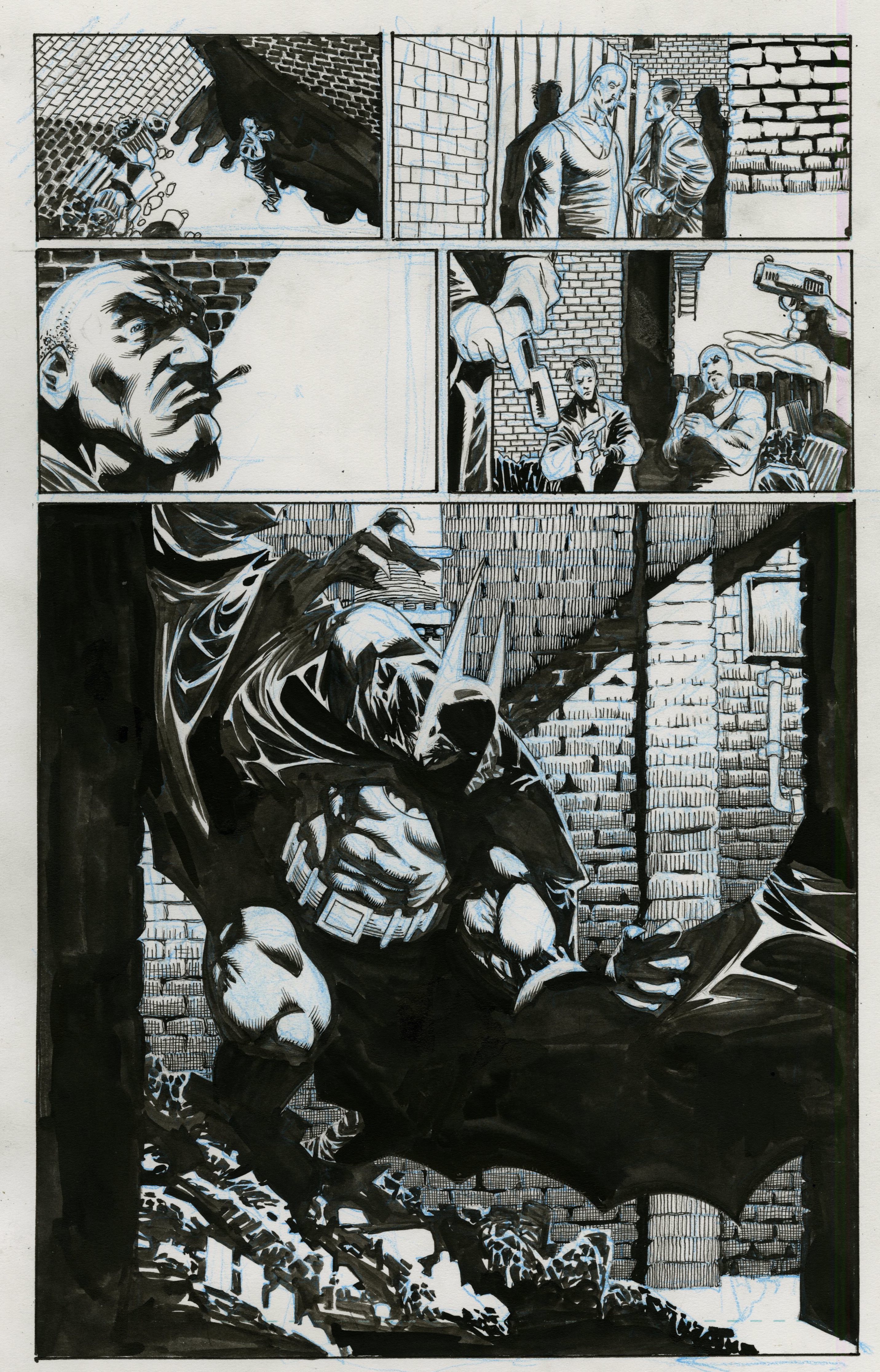 BIC: Your partner in crime in the upcoming series Scott Peterson described the series will showcase Batman’s greatest fear. Will this be something many fans will realize or will we be seeing a very different dimension added to the character?

KJ: I always thought Batman’s motivations are much more multi-faceted than just simply his parents’ death to motivate and guide him. Scott felt that way as well, and when we talked, Scott’s ideas meshed with mine perfectly. For example, I always wanted to explain what Batman meant to the citizens of Gotham, and vice versa. Stuff I never could get into the run with Doug for whatever reason. I can say I’ve never read the stuff we want to say in the Batverse before, so I know this will be the first time these points of view will be seen. I think that these outlooks can resonate well. I can say this will change how readers will see certain things they’ve all seen before a million times and take for granted and put them in a new light.

BIC: You mentioned the most fearsome part of Scarecrow, is his background in psychiatry. How will this effect the upcoming story?

KJ: Scarecrow’s power really is that he’s a great psychiatrist. He will ‘treat’ you right straight to hell. To do this though he needs to understand his patient, and that’s Batman, and that’s where the fun begins. The trouble is that the Scarecrow has the same stereotypes about Batman that we the readers do…so surprises are in store!!

BIC: I can’t wait to see what you guys have up your sleeves in this story. It sounds super interesting! 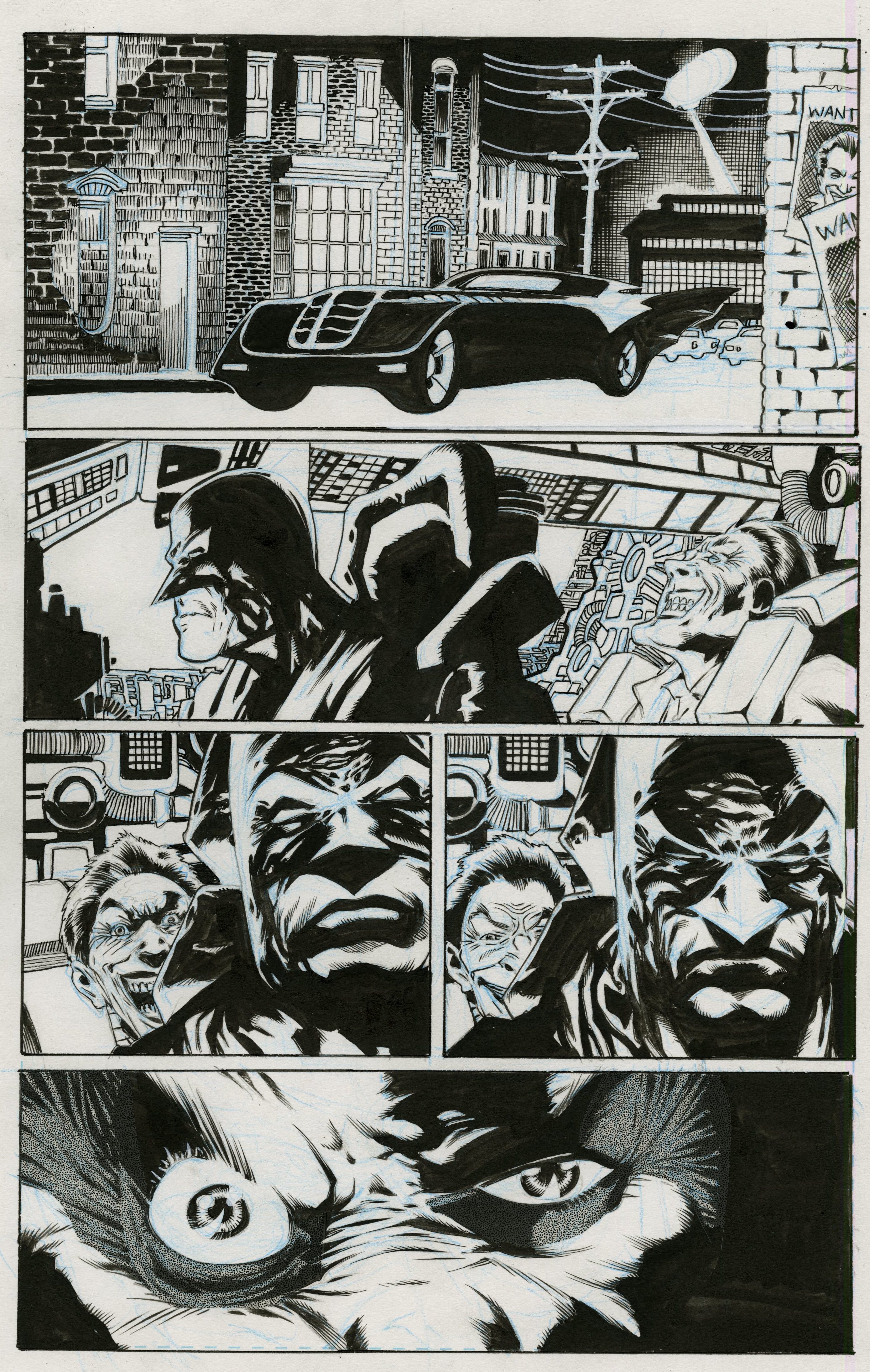 BIC: As an artist, when you are drawing a horror comic are there any techniques you try to implement to build up dread and suspense in the reader. Is there any way you can mimic those shock moments you might find in your traditional horror film?

KJ: When drawing horror you have to be sincere. That’s it. That’s all. Gory is fine, or lack of it, if you draw with conviction that what is happening is really happening.  The tropes of horror are different than superhero books to be sure, but only in the beats. They are loud at different times, and quiet at different times. When doing superhero (and Batman is that to be sure) I just try and use both perspectives to my advantage. More than my long Batman ears, this philosophy is what makes my take different than most I think.

BIC: Aside from Batman: Kings of Fear, you’ve also worked on the Swamp Thing special this year and even did an issue of Aquaman. Do you have any other upcoming DC Comics we can look forward to?

KJ: Oh I will have more to do there if they will have me (They will!). I’m at heart a ‘DC’ guy, I felt that way since they hired me to do Deadman all those years ago.

BIC: Is there a specific DC Comics character you would like to work on next?

KJ: Darkseid and Doctor Fate if I could.

BIC: Do you have any ideas or potential pitches for a Darkseid or Doctor Fate story?

KJ: Doctor Fate tries and succeeds in turning Darkseid’s power to do good no matter how Darkseid wields it…this of course makes Darkseid outsmart Doctor Fate and turn that idea around. He makes those designs far more effective in their  destructive intent. Doctor Fate then realizes he made a huge mistake, so he has to conjure and create evil to counteract Darkseid’s ‘good’ and try and stop kindness and love from taking over the known universe.

BIC: Is there a specific writer you would like to pair up?

KJ: Yes, but none of them write comics!

BIC: Can you name any of the writers you’d like to pair up with?

KJ: Kevin Wilson, who wrote The Family Fang and Tunneling to the Center of the Earth. It’ll never happen because he’s a novelist and a literary one at that! I am a big fan of his and strangely in reading an interview with him it turns out he’s a Batman fan and a fan of my long eared cape twisted Batman! 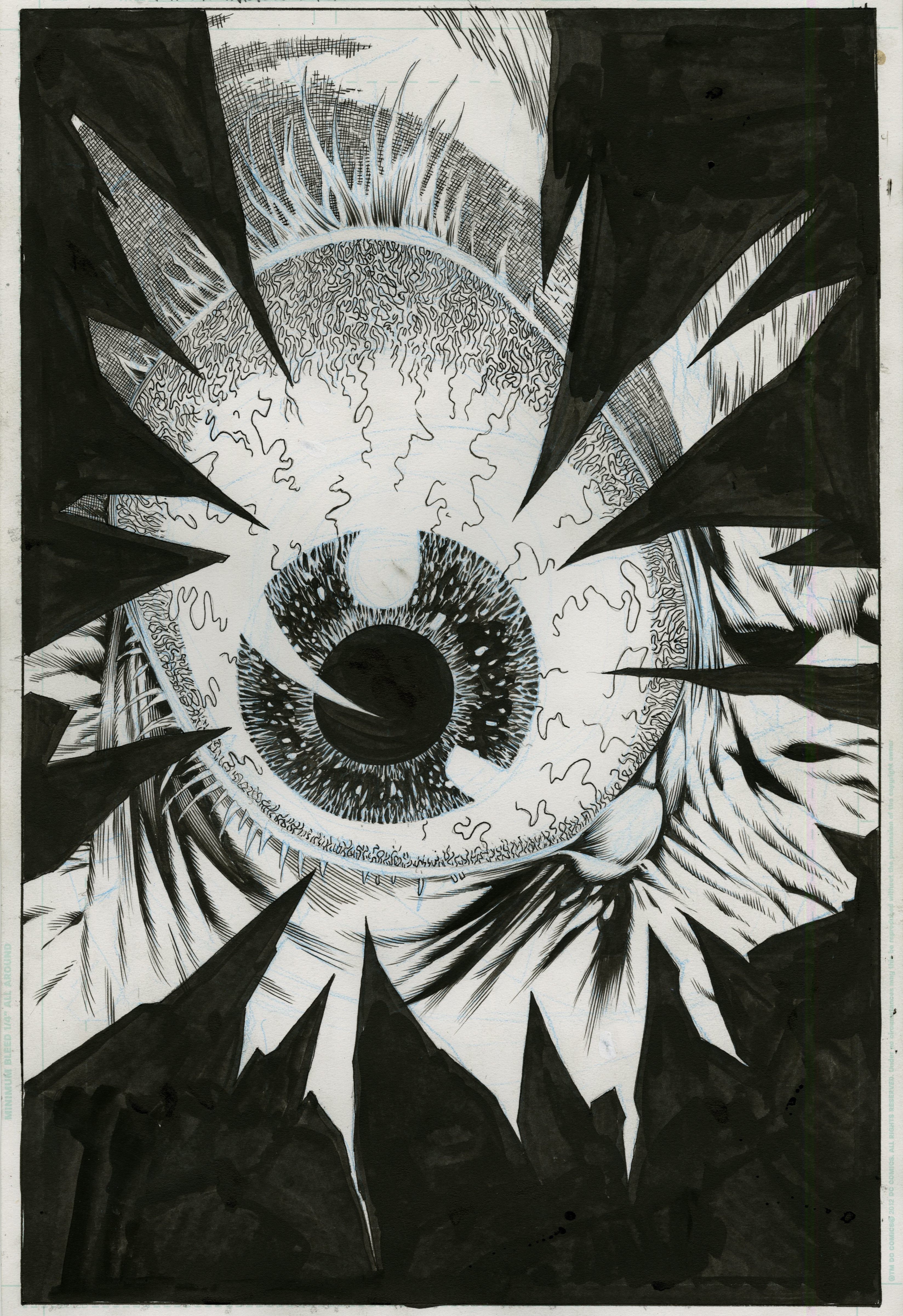 BIC: Do you have any other projects you are working on? I know you just finished up IDW’s Frankenstein Alive, Alive!

KJ: A Star Wars story for a friend at Lucasfilm and a short horror story for John Carpenter.

BIC: Can you give us any details about the Star Wars story or the horror story for John Carpenter?

KJ: The Star Wars story is a great Halloween tale starring Count Dooku…cause my highly placed buddy at Lucasfilm knows I love Christopher Lee, so he used the Force to make them let me do it!

BIC: Could they possibly be made available to the public in the future?

KJ: They will once I do them!

BIC: What do you make of the current comics industry?

KJ: It wants to be more than just comics, which I do not understand.

BIC: Do you see it still being successful?

KJ: Only if it retains its idiosyncratic take on entertaining, and stays in the realm of human nature, and the books are created with joy.

BIC: Or do you think it will have to change and adapt in order to survive?

KJ: I think we who do this need to understand what it is we do again. No one has to reinvent the wheel, we all just have to inspire, by being inspired ourselves. I am always wondering when drawing something, will anybody find this interesting…will any one care? Yet ultimately, its about not being bored that day, or week, or month I’m drawing that book. I just do what makes me happy that day. That’s a good day where you weren’t bored by doing work you produce, that’s your best chance of finding readers who will care about your work. Something new, something with a personal style can be off putting at first, but I find  in my experience that’s the stuff I reread and collect, and it inspires me.

Great comics never were a character dying, or a foil cover, or a character being red when they were green before, stuff like that.

Great comics are when you finish reading one that you want to draw or write them yourself, or maybe when you are a little kid (or big one) wear a towel and pretend its a cape! ( I used a trash can lid to be Cap after reading Tales of Suspense featuring Captain America, so I speak from experience!)

BIC: Where do you see the industry in the future?

BIC: How can folks keep in touch with you and learn more about everything you have going on?

And that’s our interview with Kelley Jones! Hope you all enjoyed it and are as excited as I am about the upcoming Batman: Kings of Fear story!