Well folks, we’re excited about this one! One of the most unique and exciting upcoming comics is Image Comics’ dark comedy/horror story, FARMHAND. We were fortunate enough to have the opportunity to ask the writer/creator/artist, Rob Guillory a few questions about his new book, and about himself!

Bounding Into Comics (BIC): First off, a little bit about yourself. Why don’t you tell us how and when you first became interested in comics?

Rob Guillory (RG): Well, comics sort of ran in my family. My grandfather’s brother Frank was a huge comic fan in the 60s, and that trickled down to two of my uncles, who grew up on classic Marvel and DC stuff. My first exposure to comics was through these uncles, when I was maybe 2 or 3 years old. I used to dig through their old comics long before I knew how to read them. So that habit stuck with me as I grew my own comic collection in the 90s. And eventually that translated into my pursuing comics as a career in the early 2000s.

BIC: Did you have any authors/artists that specifically influenced you in your own creative journey?

RG: Jim Mahfood was probably the most influential artist to me, other than the Marvel artists (like Steve Ditko and John Buscema) that I grew up with. Being exposed to Jim’s stuff totally rocked my paradigm of what comics could be. I had no idea that the comics medium was fertile soil for guys like me, who just could never fit into the “house style” of the Big 2. Discovering guys like Jim, Dave Crosland and Rob Schrab changed everything for me.

BIC: Speaking about FARMHAND specifically; when did you first get the idea for this book and how did it come about?

RG: Back in January 2016, I was gearing up to wrap a 64 issue run on Image Comics’ CHEW, and it really hit me that I needed to start plotting my next move. CHEW was an eight-year project, and I’d been so consumed with completing that book that the reality of its imminent end totally caught me by surprise. So, after a few months of digging through old idea lists, the initial FARMHAND concept popped into my head one random Sunday as just one mental image of a tree with human limbs growing from it. The visual really grabbed me, and a narrative started to emerge from there. About ten months later, the script for the first issue was completed. 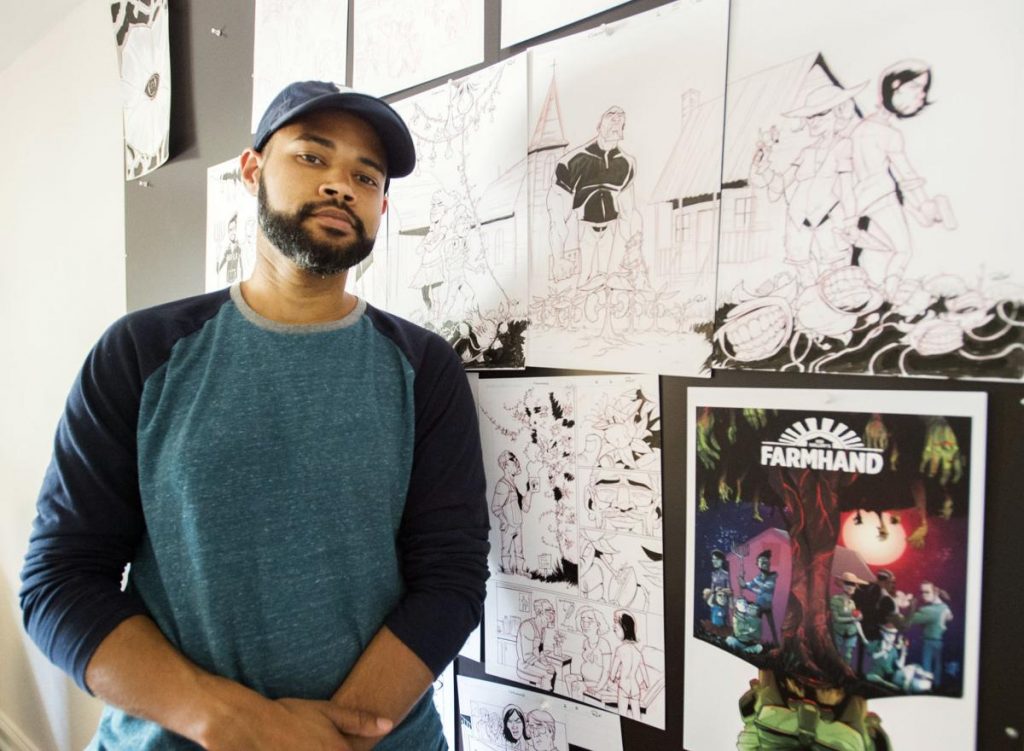 BIC: Were you apprehensive at all about pitching this story? It seems like comics are one of the only mediums brave enough to tell some of the wild stories they do, but do you still get nervous about whether or not the publisher will be able to see your vision?

RG: I think it’s always a little nerve-wracking to share a new idea for the first time, and pitching FARMHAND was no exception. I absolutely believed it was a strong story, but there’s always a little voice in the back of my head that wonders “Am I the only one that thinks this is a cool idea? Am I crazy here?” But I’ve learned how to press through those little nagging doubts over time. In the end, I believe in the work I’m making, and I just assumed FARMHAND would end up where it needed to be.

BIC: You’re writing the story for FARMHAND AND doing all the art. Do you prefer doing both the writing and the art for a book?

RG: Well, before CHEW, I wrote most of my own stories. And I was actually working on my own unpublished indie title when CHEW got offered to me, so I always knew I’d be returning to writing my own stories. I can’t say that I prefer one or the other, really. Both have their pros and cons. Working with a talented writer can be loads of fun, but it’s a partership, and that requires compromises. Working solo requires less compromise, but it’s definitely more work. So really, I could go either way. But I’m certainly having a ball doing my own thing on FARMHAND.

BIC: Do you already have the entire story arc in your head, or are you still working it out?

RG: As of now, I’m inking issue 5, and I’ve got an outline for 24-30 issues that I’m working from. I’ve got certain milestones in the story that I’ve set in place, but I’ve left a good bit of wiggle room to improvise and just have fun as new ideas hit me. But yes, there’s an ending I’m working toward.

BIC: Do you have a time span in mind that you would like to see Farmhand run, or are you just planning on seeing how things shake out?

RG: It really depends on sales and what production schedule best suits the book, but I’m thinking FARMHAND will be a 3-4 year project. Five issue arcs with a few skip months built between each arc to allow me the time to make the work. For the first story arc, I actually released a FARMHAND Release Schedule/Seasonal Calendar, which sets every issue’s release date in stone, so I’ll probably try to do that each arc. I think releasing it in seasons is healthy for me and informative for readers and retailers. They’ll always know when the next issue comes out. 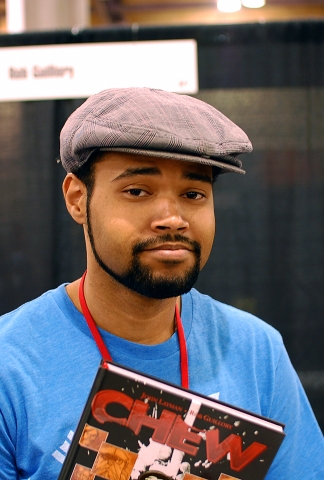 BIC: On first look, FARMHAND appears to be a horror story, but there are so many dynamics in just the first issue. One aspect that was a pleasant surprise was the strong sense of family and reconciliation. Were you able to pull from some personal experiences to put in your story?

RG: That’s good to hear. I really wanted to get across the multi-faceted nature of this story in issue one, and distilling the core of FARMHAND to one 32-page chapter was super-challenging. Without giving too much away, yes I’ve had some very real experiences with familial trauma and what the road to reconciliation looks like. That’s absolutely informing a lot of my storytelling here. FARMHAND isn’t autobiographical, but it’s definitely a product of me having ruminated on various things in my life.

BIC: One thing that I didn’t expect to do when I first started the book was to laugh so much. But I did. Out-loud. A lot. That’s not something I typically do when reading comics, but the humor was prevalent throughout. Was that intentional on your part to offset some of the more gruesome imagery, or was it just a natural part of the writing process?

RG: Well, I didn’t want FARMHAND to be so overpoweringly dark that reading it became a chore. I wanted to make a fun horror book, which sounds a little weird, but that really was my goal. And part of it is that humor infuses so much of who I am and how I draw that it would be impossible to make a comic with zero comedy in it. I like having fun in my stories, so it just came natural. But again, it’s great to hear you got a laugh out of it. 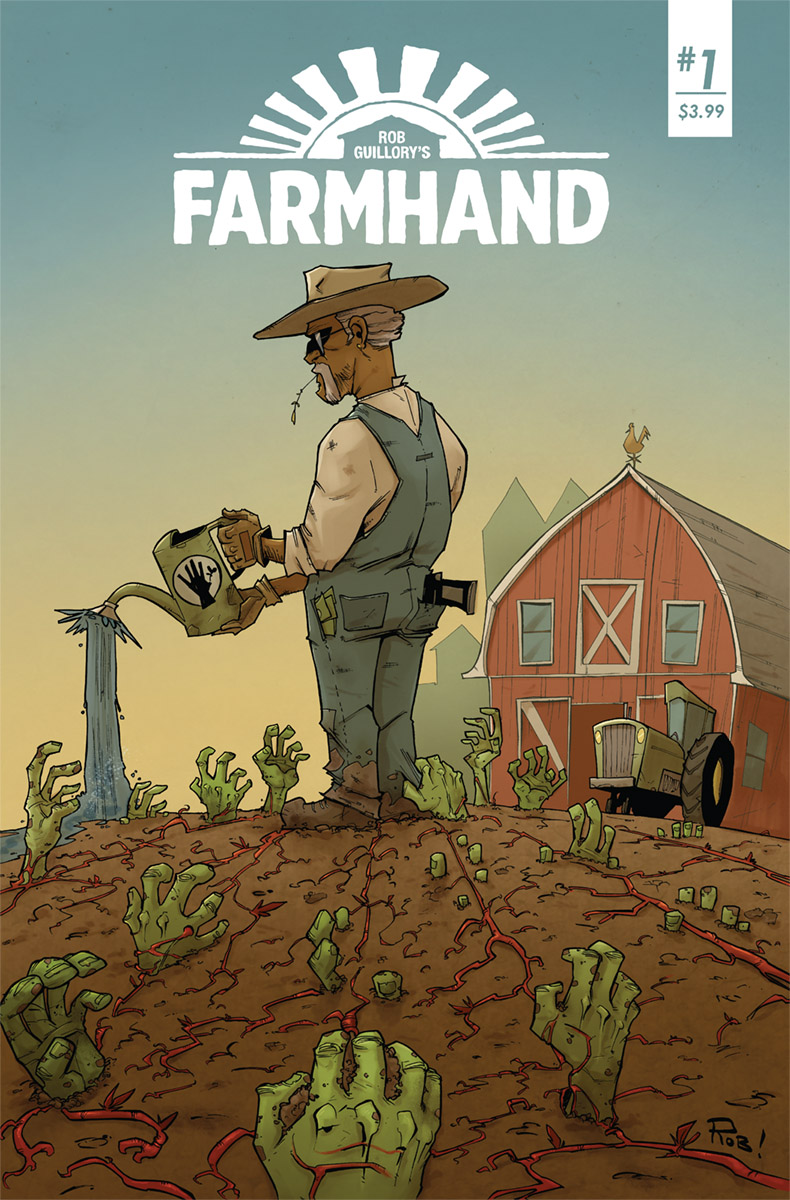 BIC: How proud are you that you were able to make Jaden Smith emote more in one panel than he ever has in any of his movies?

RG: I’m hoping for an Eisner from it. “Best Use of Jaden Smith in a Comic”. It’s a small pool.

BIC: Any dreams for FARMHAND outside of the realms of comics?

RG: Anything’s possible, I suppose. Whatever medium FARMHAND is told in, I just want it to remain true to the core I’m creating here. If it doesn’t, I’d rather it remain only a comic.

BIC: Along those lines, comic book movies are everywhere nowadays. If FARMHAND became a movie, who would your dream director be?

RG: I’d love to see what Jordan Peele would do with it.

BIC: Do you already have an idea for the next story you’d like to tell once FARMHAND has run its course?

RG: I have a good idea for the nap I’ll be taking after I finish FARMHAND. It’ll be a glorious one. 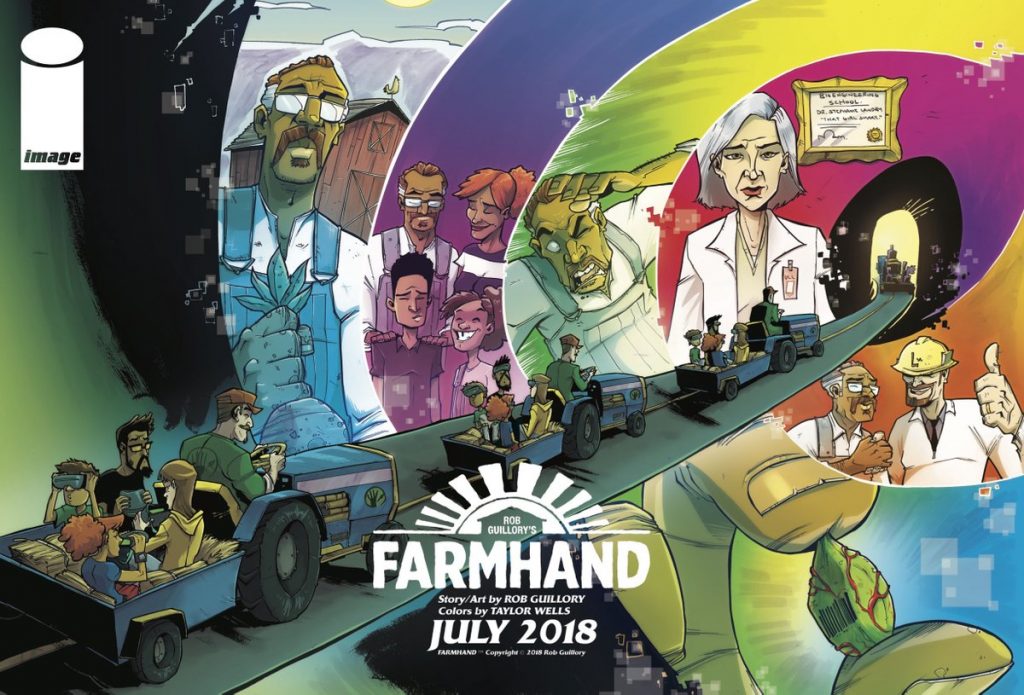 BIC: Any dream comic properties you would like to write for some day? To draw for?

RG: I’d love to screw around with TMNT one day. Or Spider-Man. All the typical fanboy answers apply here, I think.

BIC: What is your opinion on the current state of the comic book industry right now? Do you think the industry is doing enough to thrive into the future and if not, what do you think it could do to improve?

RG: I think most creators are a little anxious to know what the industry will look like in 5-10 years, and I can certainly relate. I do wonder if single issues will be viable in the future, given how much the market seems to be pretty oversaturated now. Who knows? I think talented creators will always find a way to get their work into their audience’s hands, but I definitely expect the direct market to shift its model at some point. I’m seeing more creators strike out on their own, self-publishing and curating their fanbases directly, without a publisher or distributor to deal with. I’m keeping my eye on Panel Syndicate and creators like Michel Fiffe, personally.

BIC: If you could give every comic book writer and artist one piece of collective advice right now, what would it be?

RG: Make what you love. Have a realistic plan. Play to your individual strengths, while working to strengthen your weaknesses. Be grateful for your audience. That’s more than one, I know, but I couldn’t help it. 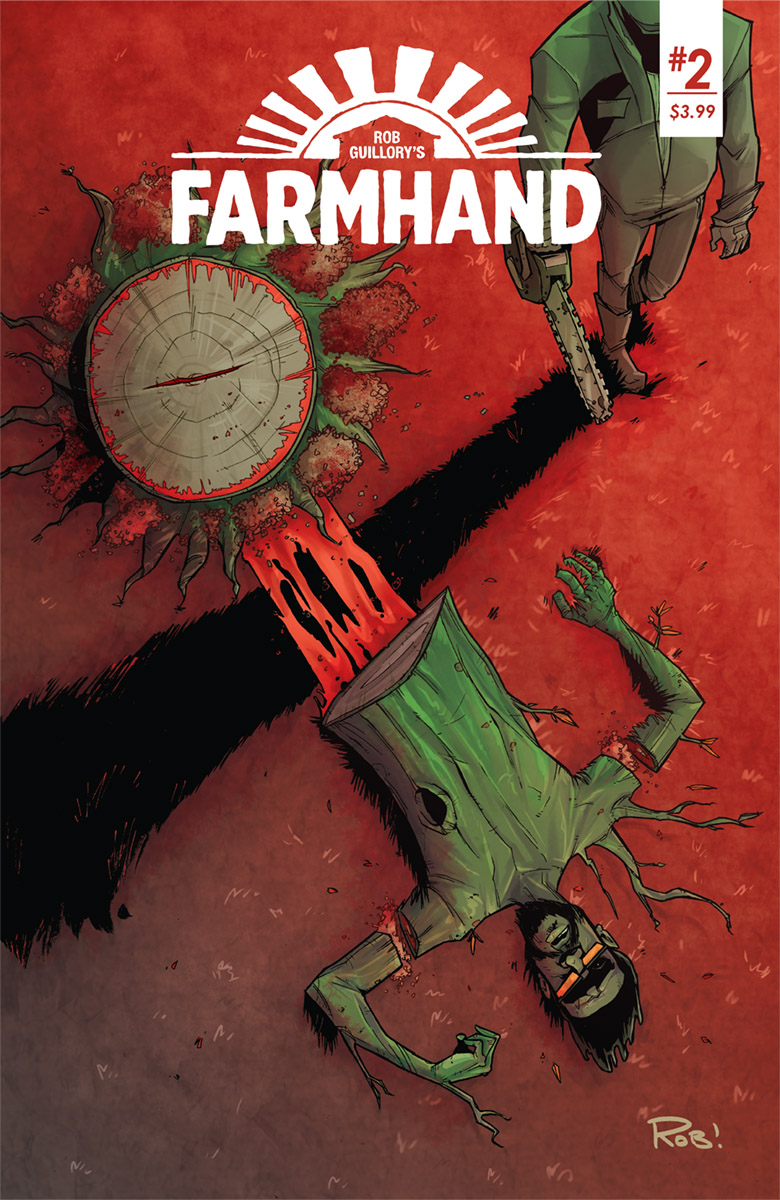 BIC: What is the best way for people to keep up with you?

Well guys, we certainly hope you enjoyed our interview with Rob Guillory and we want to give him a great big THANK YOU! for taking the time to chat with us. And let me say, I would be first in line to buy a TMNT comic written by him. Be sure to check out his website and catch up with him on social media. Also, keep an eye out for FARMHAND coming soon. (SPOILERS: It’s really good!)