I’m probably not the best person to be reviewing a Halo comic book. While I am a huge video game fan, the only Halo title I’ve ever played to completion is the original way back when on the original Xbox. It was… fine, but I never understood why it was the world-changer that its reputation says it was. Lots of people do love it, though, and Halo has seated itself firmly into the annals of pop-culture history. But, regardless of whether or not I’m in love worth the source material, as a comic fan I should be able to pick up the first issue of a new series and become lost in the universe and be sufficiently entertained. When it comes to this particular book, however, I was neither.

Halo: Collateral Damage #1 is the first issue of a new mini-series from Dark Horse comics. It’s written by Halo veteran Alex Irvine and the art is being handled by David Crosland. The story takes place early in the Covenant War and sees Master Chief, paired up with three other Spartans (two females and one male, just to keep everything fair) and being sent to a planet being besieged by Covenant forces. This must be before the days that Master Chief proved his mettle because I’m pretty sure he could have done this single-handedly. 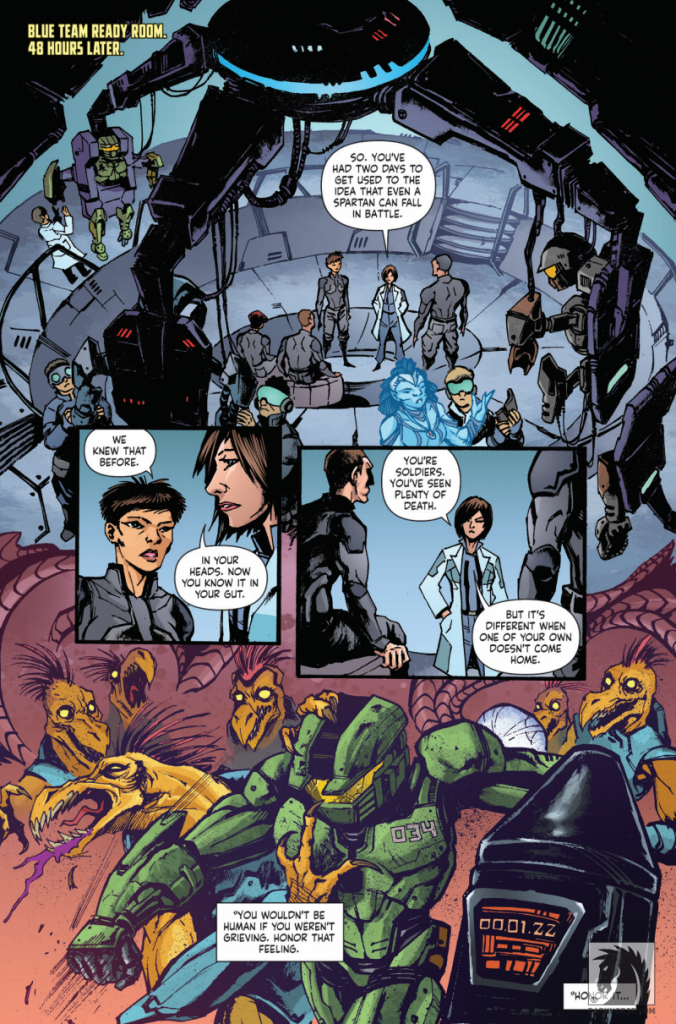 The premise this first issue sets up is fairly intriguing. I enjoy the idea of a team of Spartans being sent on a reconnaissance mission before they have a good understanding of their enemies. Even if four Spartans seems like a bit of overkill, it’s still nice to see them used as something other than a battering ram barging through the front lines. To that end, Master Chief himself comes off appropriately cool and threatening here. He carries a presence that commands respect from everyone he comes across; I just wish he was given more to do.

That complaint isn’t simply relegated to Master Chief, unfortunately. Not a whole lot of excitement takes place here. There is a lot of talk about action going on in the panels; we see people remembering interesting things and discussing action-packed goings-on, but we hardly get to witness any of it happen in real time. Picking up a Halo title should carry with it some expectations of action scenes and alien blasting, but anyone looking forward to that will probably find themselves disappointed. Like I said, there’s a lot of talk about stuff like this, but there’s very little of it actually going on. I understand that the first issue of a limited series needs to lay the groundwork and fill us in with exposition, but we get too much of it here and for what it’s worth, all the world-building doesn’t do a great job of explaining much to the reader anyway. 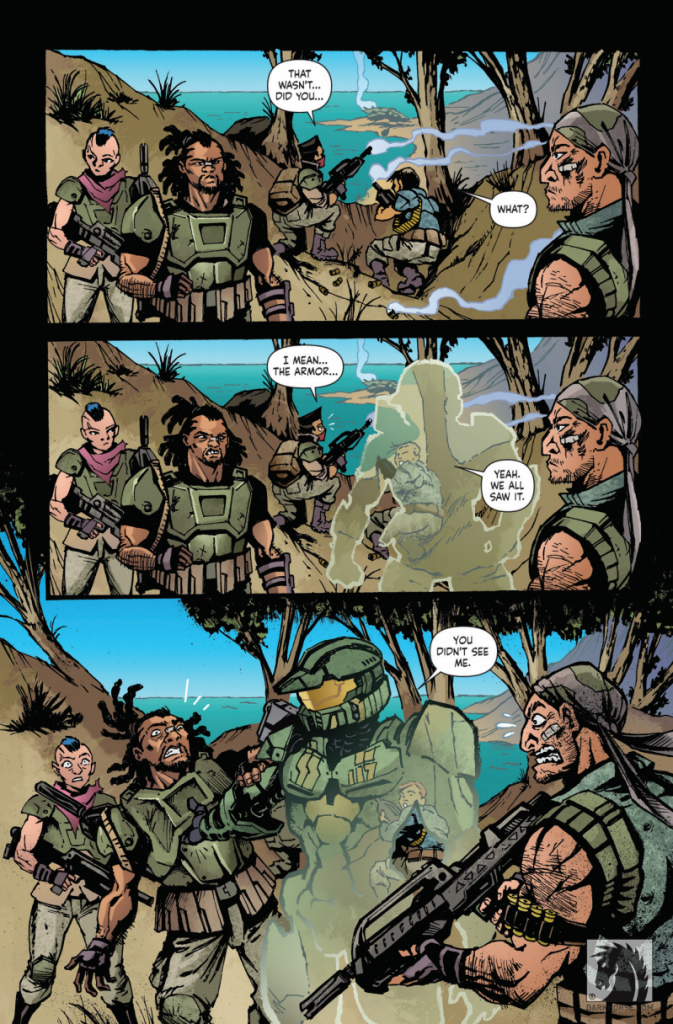 The artwork is also a sticking point for me. It’s not bad, it’s actually very good, but I don’t feel like it gels well with the Halo universe. Characters look misshapen and lumpy, like they’re made of clay almost. Most egregious is the fact that the creators decided to show us Master Chief’s real face, which is a bit of a “no-no,” as all Halo fans know. Even the creators of the video game put in safeguards against people seeing it by putting a digital mask underneath his regular mask in case hackers were able to remove it. The fact that they show his face is strange enough, but it’s made worse by the fact that he looks like a goofy Muppet. John deserves better than that. Suffice it to say, there are some good things peppered all throughout this first issue of Halo, but none of it comes together in a cohesive way. I really enjoyed bits and pieces, but liking parts of a comic book isn’t enough to warrant a recommendation.

While I am not the biggest Halo fan in the world, my 15-year-old son actually does really enjoy this series and has played all the titles thus far. He was excited to read this comic, but he came away disappointed. Among other things, he said that it was boring and that he didn’t remember all the scientists and commanding officers in the UNSC being female. He remarked that it seemed to be familiar characters placed in an alternate Halo universe. If you’re alright with that, then you might like this series, but it’s not for me or my son, who is probably the target audience for this title anyway.