**Warning Spoilers for Batman #50 Below**

The New York Times reported Catwoman and Batman would not be tying the knot after all. The two had planned a wedding ceremony at dawn at the top of Finger Tower in Gotham. However, Catwoman stands Bruce Wayne up and leaves him standing at the metaphorical altar.

She explains her reasoning in a letter to Batman, I guess it’s better than a text message.

“You are still a child, Bruce. A hurt child. These past months, the desert, the boy, Superman, Wonder Woman, Ivy. But what you do with that hurt…I saw the hero it made you. And then…as if to prove what I saw…Booster. A world in horror because you’re content. Joker. Knowing if you were settled you couldn’t stop him. You are an engine that turns pain into hope. If we’re happy…and we could be so happy…If I help that lonely boy, with the lonely eyes. I kill that engine. I kill Batman. I kill the person who saves everyone. And how can I do that? How can I love you so much and look in your eyes. Into that endless blue. That gorgeous blue. That blue that calls me. Knowing… To save the world, heroes make sacrifices. That’s the lesson every story. I wish I could give my life, but I can’t, I have to give more. My sacrifice is my love. It’s you.

With all my love, 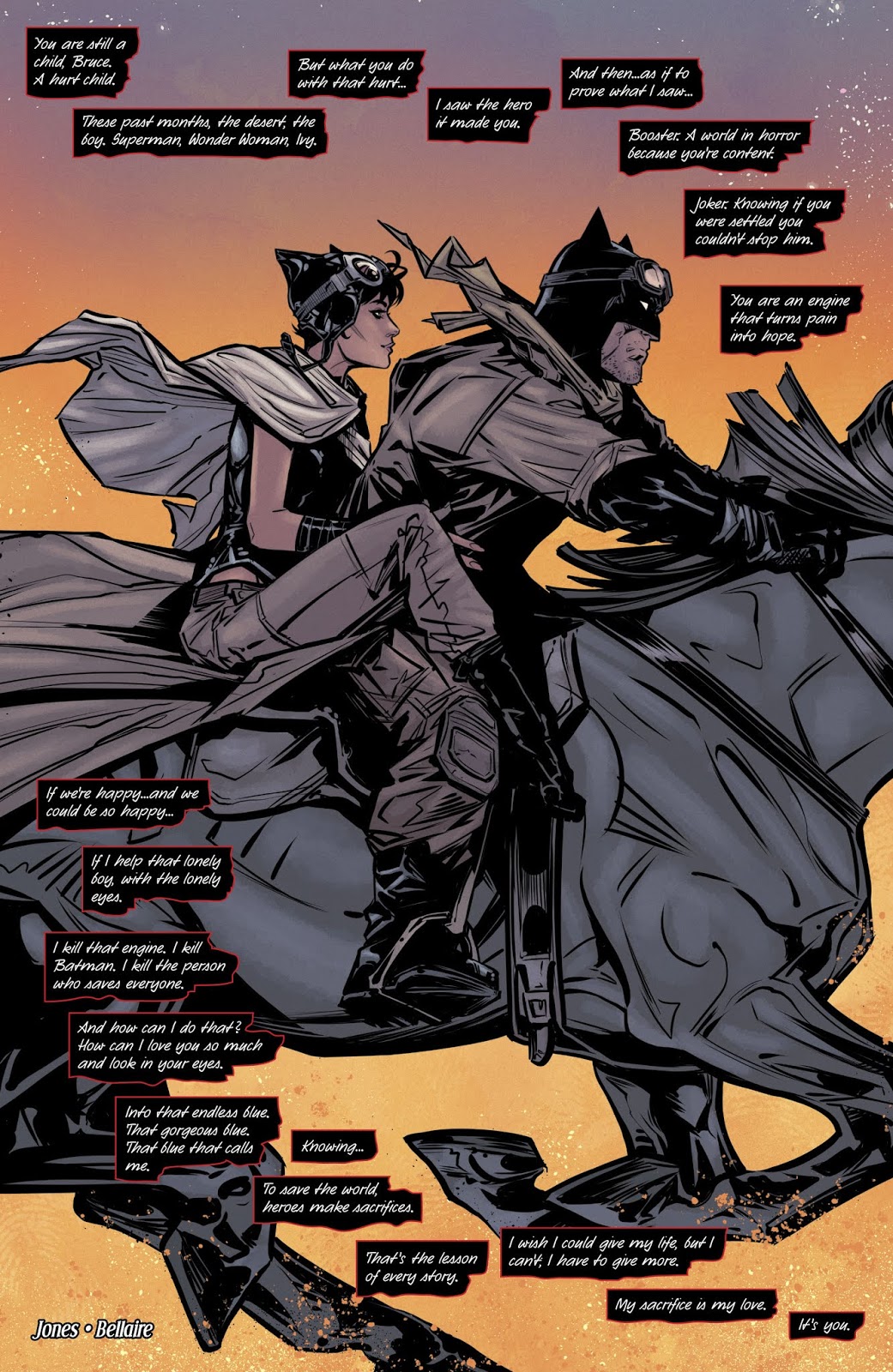 However, as Catwoman and Batman appear to go separate ways, a voice in the darkness is heard. The voice of the man who broke the Bat the first time, and who now claims he has broken him the second time.

Bane appears in Arkham alongside Riddler, Joker, Psycho-Pirate, Gotham Girl, Ventrilogquist, Hugo Strange, and what appears to be Thomas Wayne from the Flashpoint timeline aka Batman.

Bane tells Holly Robinson, “Do not…worry. I know He is…what I have made him. The Bat is…Broken.” 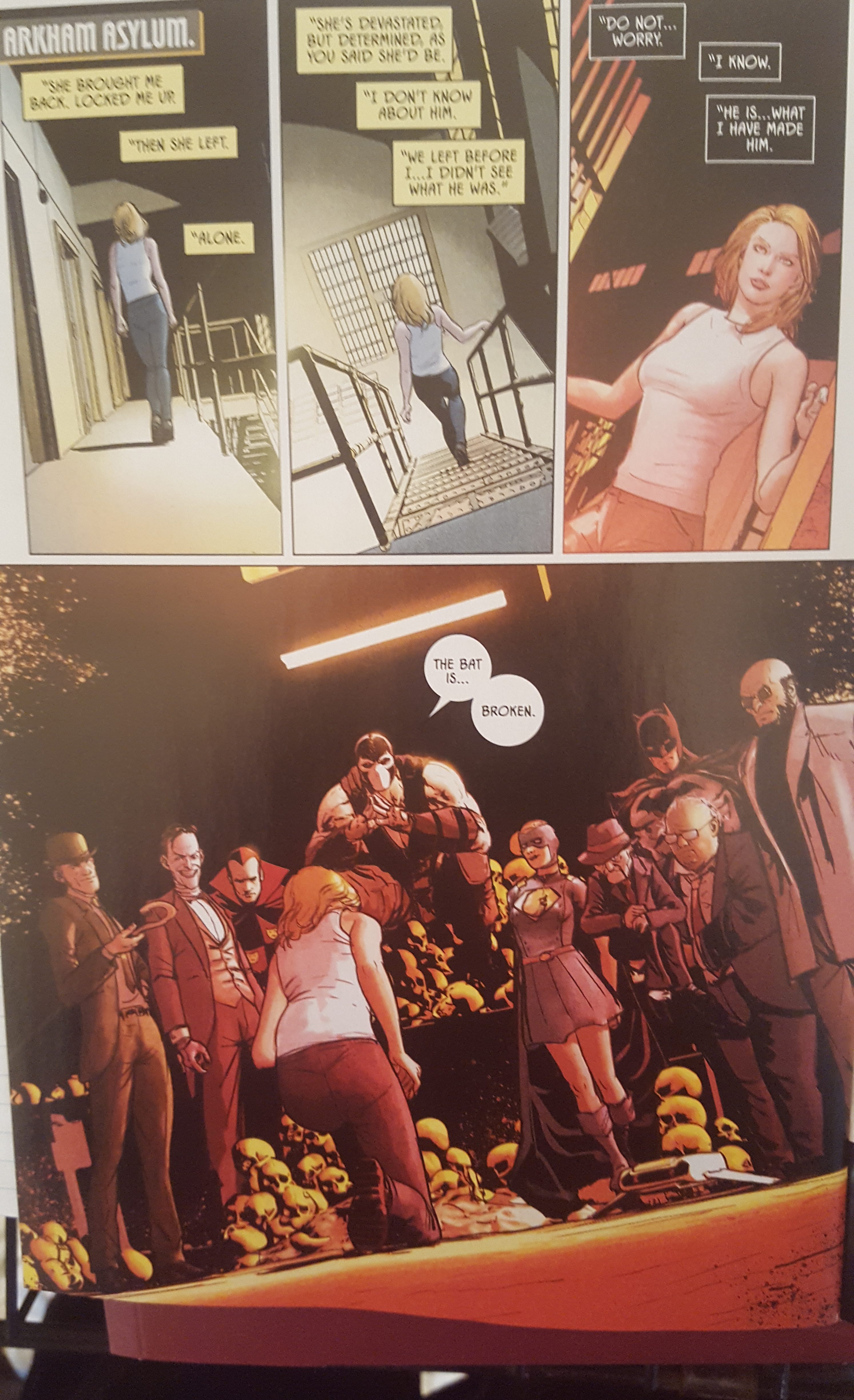 It appears Bane is the one behind Catwoman’s decision to leave Batman at the altar. And with Psycho Pirate at his side it’s not too far of a stretch to believe that Bane has used Psycho-Pirate to manipulate Catwoman’s emotions in order to get her to leave Bruce. But what role could Thomas Wayne be playing and why does he stand next to Bane? What theories do you have concerning Bane’s master plan now being shown?

As for the other folks who stand next to Bane, they are the major players in Tom King’s current run on Batman. Joker and Riddler took to the streets and turned Gotham into a warzone in The War of Jokes and Riddles. Gotham Girl debuted in the very first arc next to her brother. Hugo Strange was pivotal to the Night of the Monster Men and delivering Psycho-Pirate to Bane. Thomas Wayne showed up in “The Button.” And Ventriloquist actually aided Batman in his fight against Bane.

It appears Bane is collecting all of these pieces in a ploy to do much more than break him. My guess is he wants to destroy him once and for all.