At the end of the first issue of Halo: Collateral Damage, we saw Master Chief and his Spartan team entering underground tunnels in an effort to cut off enemy Covenant troops on the other side of the island while a team of resistance fighters stayed above ground, keeping the enemy occupied. It was an exciting end to a rather lackluster first issue which delved too deep into boring exposition. Luckily, issue #2 of Dark Horse’s latest Halo series ratchets up the excitement and fun and while it doesn’t come away problem free, it promises great fun going forward for Halo fans.

The heart of the Halo franchise has always been the fast and frenzied action. Sure, there are a lot of people who enjoy the mythos and the backstory, but Halo lives and dies on the quality of action. The first issue was lacking , but issue #2 does right by showing a more expansive view of the battlefield and letting us get to know the people who are fighting on it. The Covenant are appropriately threatening and pose a real threat to not only Chief and his crew, but to the mass of resistance fighters who are fighting to protect their island. 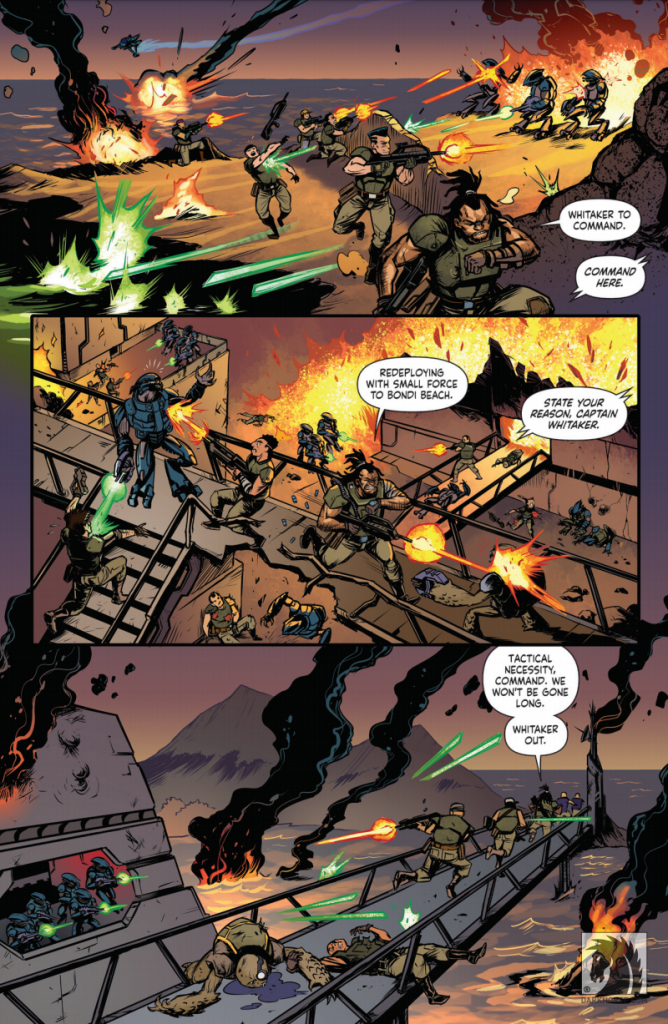 Speaking of the resistance fighters, they really are the stars of this issue. Their personalities get more of a chance to shine here and it’s a lot of fun to see how different they all are and how much discrepancy there is in the amount of trust they have in Master Chief and his crew. They are holding to an uneasy alliance with the Spartans, as they do not trust them or the UNSC and the fact that so many of them are even hostile to the idea of working with them makes for some compelling drama. The issue of half wanting to fight along side the Spartans, and the other half not wanting to comes to a head near the end of the issue where some rather big and potentially life-threatening decisions are made.

The Spartans themselves, while still appropriately cool, aren’t given quite as much to do as they spend most of their time slinking through underground caverns and generally trying to avoid enemy contact altogether. They are successful, for the most part, but they do, of course, run afoul of some bad guys and they get at least one scene wherein they get to show off some sweet cloaking technology as well as lay a fun beat-down on some unsuspecting Covenant forces. The down side to all this is that the Spartans themselves are severely lacking in personality. I know it must be difficult to flesh out characters who are born and bred to be fighters and who wear armor from head to toe, but this is a Halo book and every time the action focused on the Spartans, I found myself ready to get back to the resistance fighters up on the surface. 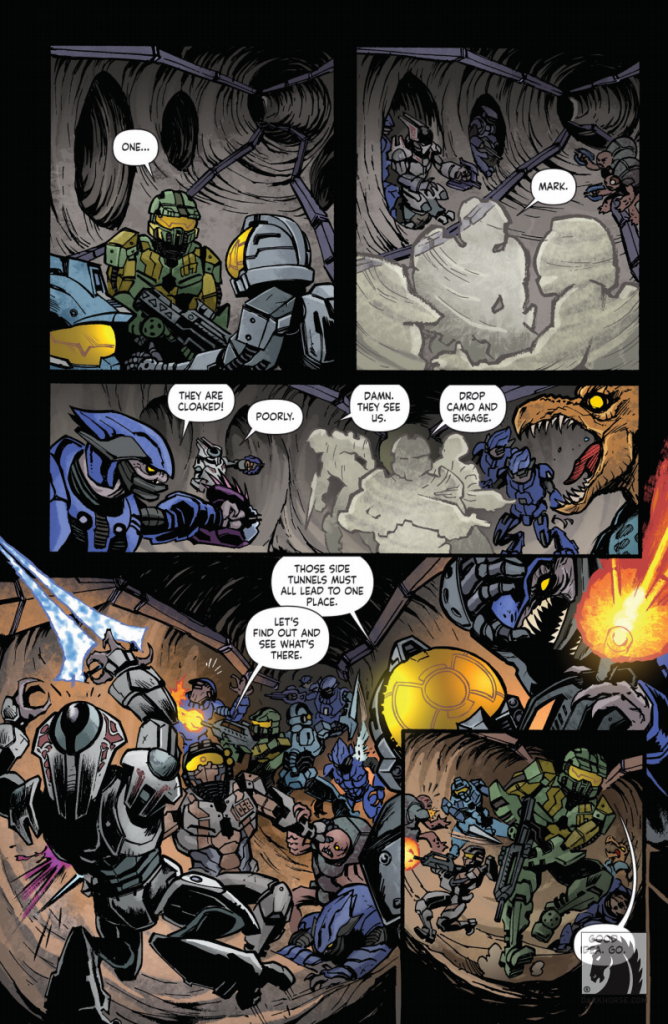 Master Chief himself is also a bit of a problem here. Not because he does anything off putting or is written poorly; it’s just that he has very little to do here. Master Chief and the Halo brand are inseparable, so it’s strange to read a Halo book and see Chief play the role of what amounts to a supporting character. He isn’t left to the wayside or forgotten or anything like that, but he isn’t more a focus than any other Spartan in this book and that’s a bit strange, especially considering that this book is being marketed as “A Master Chief Story”.

On the art side of things, it’s an extremely well drawn book. Dave Crosland is obviously a gifted talent and he does a great job of conveying emotion and action, but I’m still not convinced that the art style is perfect for a Halo title. I couldn’t tell you exactly why as I do enjoy the art, it’s just that every once in a while it doesn’t seem that the style gels with the universe it’s in. However, it’s entirely possible that it could just be me personally having a bit of a problem with it, but regardless of whether or not I always think it fits, it’s still extremely well done.

Things are looking up! I was a little let down after the first issue, but issue #2 came roaring back and offered a fun and frantic look into the ongoing Covenant battle from both the surface, and underground. I’d like to see a little more focus on Chief himself and maybe some more characterization for the rest of the Spartans, but on a whole this was a highly entertaining issue that reassured me that this title is indeed in good hands!