Another DC Comics title hits a milestone as Wonder Woman #50 hits the comic shelves this week. James Robinson’s run on the character has not been as well-received as previous writers. Though Diana Prince has never seen as much action, some of the story has fallen short of its usual quality. While Wonder Woman #50 is a beautiful blend of several artists, it’s an odd mess of a story. The issue quickly wraps up the Dark Gods storyline. So quickly that it almost feels like an afterthought. The odd structure of the story makes it even more difficult to immerse oneself in the story, as the entire issue is presented like a memory despite the fact that it literally just happened.

As Diana mourns over the momentary loss of her brother, Steve Trevor leaves to join another war. A familiar trope that seems like an excuse to keep these two apart. Rather than giving the pair a couple of stories to themselves, they’re once again forced to leave each other. The pages are filled with rich detail and color. While there are multiple artists on the issue, it’s difficult to pin down exactly when the changes happen. Multiple artist teams aren’t preferred, but the team behind Wonder Woman #50 have similar styles that work in their favor.

Overall, the issue is a little strange. While the action and art are as eye-catching as ever, the story can be confusing and poorly structured. Wonder Woman #50 is certainly a milestone, but it falls a bit short.

Diana and Jason facing off against the Dark Gods. While James Robinson’s most recent arc on Wonder Woman has been mostly action, it’s been fun to see Diana teaming up with her brother. That same perspective makes Wonder Woman #50 an entertaining issue. Though the structure and plot can be a bit confusing, Jason is a nice addition to Diana’s story. Like the selfless person she is, Diana has opened her life and will to Jason. But this is a comic book we’re talking about. Happiness doesn’t last. 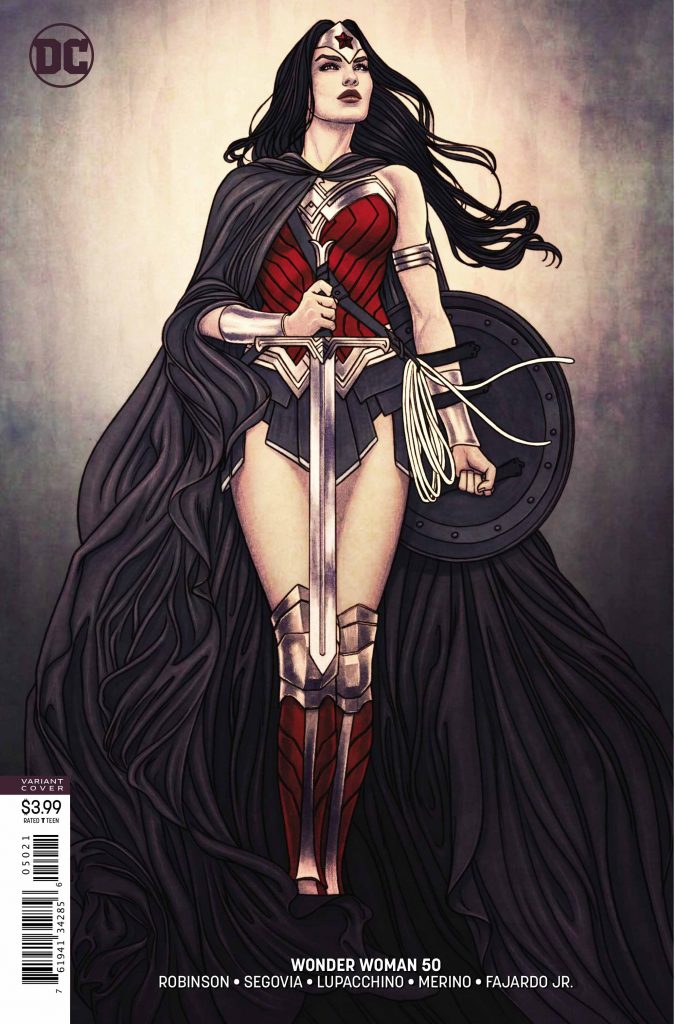 The drama contained in this issue isn’t quite as effective as it should be. Audiences won’t sympathize with any of the characters. That’s not to say that there isn’t drama, there is plenty. Unfortunately, it’s the manner in which it’s presented to the reader. When attempting to structure the end of an arc as a distant memory, it loses much of its significance. The reader won’t feel like they’re in the story, they’ll feel like they missed part of it. The conclusion to the Dark Gods arc contains some awesome action, but feels more like an awkward beginning than a definitive finale.

“You smile and my day gets brighter.”

A beautiful and contagious smile seems to be a constant with Diana Prince. Whether it’s Gal Gadot bringing her to life, or artists drawing her to perfection, she has a smile that can command a room and instill hope in everyone around her. She is just as breathtaking as ever in Wonder Woman #50. Artists Stephen Segovia, Jesus Merino, Andy Owens, Emanuela Luppachino and Ray McCarthy had their work cut out for them by depicting massive landscapes across Earth and crafting gigantic monsters and gods for Wonder Woman to crush. That’s no easy task. 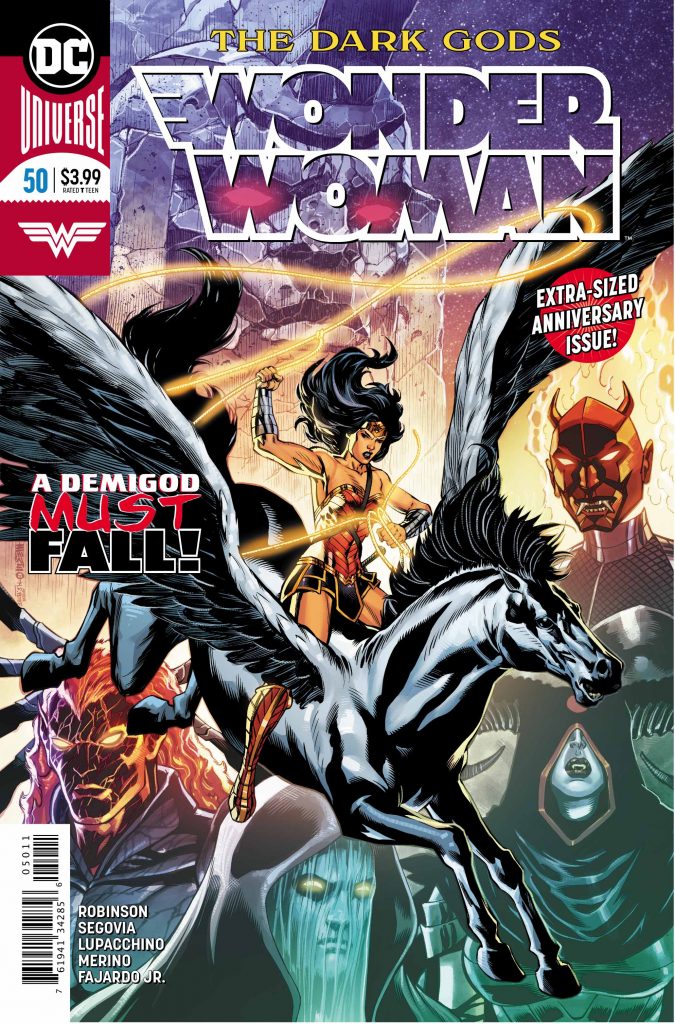 While one single artist is usually more appreciated for continuity’s sake, these five make it work. The Dark Gods in particular look devastatingly awesome and powerful. Even the Justice League look good in their brief cameo. Romulo Fajardo Jr. and Chris Sotomayor provide some excellent colors helping to further mask those pesky artist changes. While the story of Wonder Woman #50 is a little messy, the art is anything but.

Diana Prince and Steve Trevor just can’t catch a break. When it seems like one of the most famous couples in comics will finally get some peace, one of them is whisked off to another story. Such is the case with Wonder Woman #50. A weirdly structured story that puts an end to the Dark Gods arc by way of a…memory. Rather than a straightforward conclusion Diana ends up telling the rest of the story to Steve on his way to the Navy. An odd choice that doesn’t quite fit with the rest of the arc.

Nevertheless, fans expect to see Wonder Woman in some fantastic action, and that’s what happened. While most of the action took place in the previous issues, every page feels as electrifying as ever. A testament to the talent of the 7-person creative team that illustrated Wonder Woman #50. Every single artist takes advantage of their pages, filling them with incredible details and glorious colors by Romulo Fajardo Jr. and Chris Sotomayor. This issue perfectly demonstrates the importance of good colorists to a multiple-artist comic.

James Robinson’s Wonder Woman run has been a divisive run for fans. While Dark Gods has been an interesting arc, Wonder Woman #50 is a disappointing finale. Readers will get the action and adventure they desire, but they won’t find a satisfying conclusion to the story of Diana and her brother Jason.