If nothing else, Sword Daughter has certainly grown on me since the first issue, which is saying something considering we’re only on the second issue. I liked, but didn’t love issue #1, but I definitely saw some potential. Issue #2, in my mind, definitely begins to build on that potential with an interesting story that takes a (perhaps too early) break from the main story to let Mads Mikkelsen… I mean Dag and his daughter, Elsbeth, venture to a strange land and help solve a violent mystery.

From the outset, it’s obvious that the main thrust of this series going forward will be the growing relationship between Dag and his estranged (emphasis on the strange) daughter. It’s satisfying to see the bond between them grow as it did in this issue and although they have quite a long way to go before Dag is escorting her to the father/daughter dance at the middle school, I enjoyed seeing their relationship grow. As a father myself, it’s easy to identify with Dag and his desire to connect with his daughter and I think that their relationship will be what continues to draw me, personally, to this title. 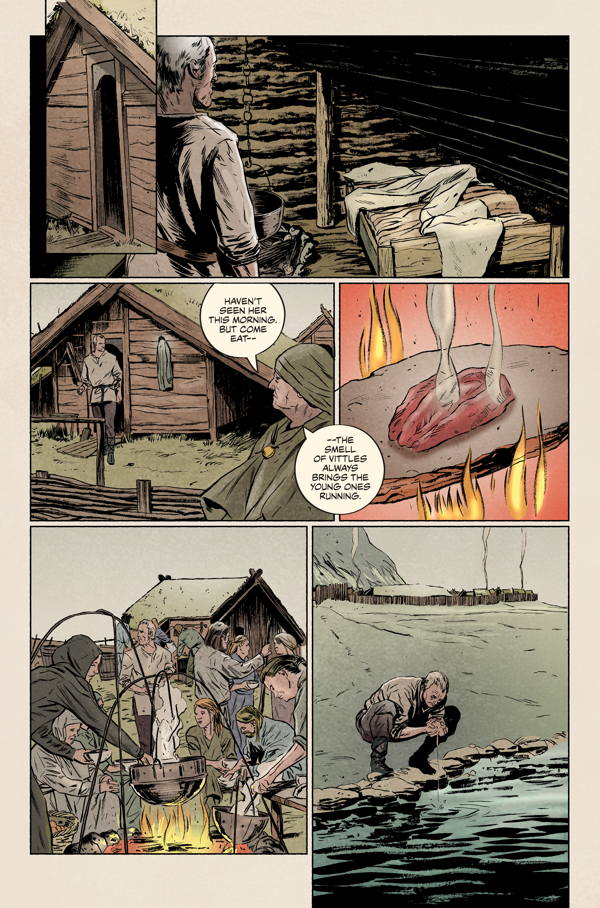 The story in this second issue of Sword Daughter is far more self contained than the first issue. While issue #1 introduced us to the major player and outlined the villains, the plight, and the motives, issue #2 sets that narrative aside in favor of Dag and Elsbeth traveling to an island and eventually getting caught up in the island’s inhabitants’ troubles with a serial killer. Now, granted, the overarching storyline hasn’t been completely ignored as the stopover on the island took place en route to find the main villains of the piece, but the story itself is almost entirely self-contained. I actually enjoyed this narrative choice as it reminded me of a “Monster of the Week” episode of the X-Files as in there is still an over-arching narrative taking place, but there are plenty of independent stories to tell on the way. It’s also nice to see Dag go out of his way to help people he doesn’t know and it helps to flesh out his character a bit and showcase both his and his daughter’s willingness to assist those in need.

The only qualm I may have with this narrative decision is that it might have been a little bit early to side step the main story of Sword Daughter. Issue #1 barely got the story arc moving forward and I was left wanting to know more about what was happening after I read it. To step away this early is a bit jarring and while I like the story and this issue better overall, I still feel a little on the outs when it comes to some of the main story specifically concerning the villains and their motives. They seemed so cool and I just wanted to know more about them.

On the plus side, the story told here is very good. There’s a serial killer murdering young blonde women and Dag offers his services to track the man down in exchange for a boat to continue his travels. It was nice seeing him and his daughter sweeping the forests together and it gave them a good opportunity for some bonding, even though Elsbeth still talks in weird symbols as opposed to words. Dag’s proficiency with a blade gets some good page time, as well as his willingness to kill when necessary, coupled with his natural aversion to it. Plus, we get to see him fight what is basically a comic book version of Dolph Lundgren. Fantastic. 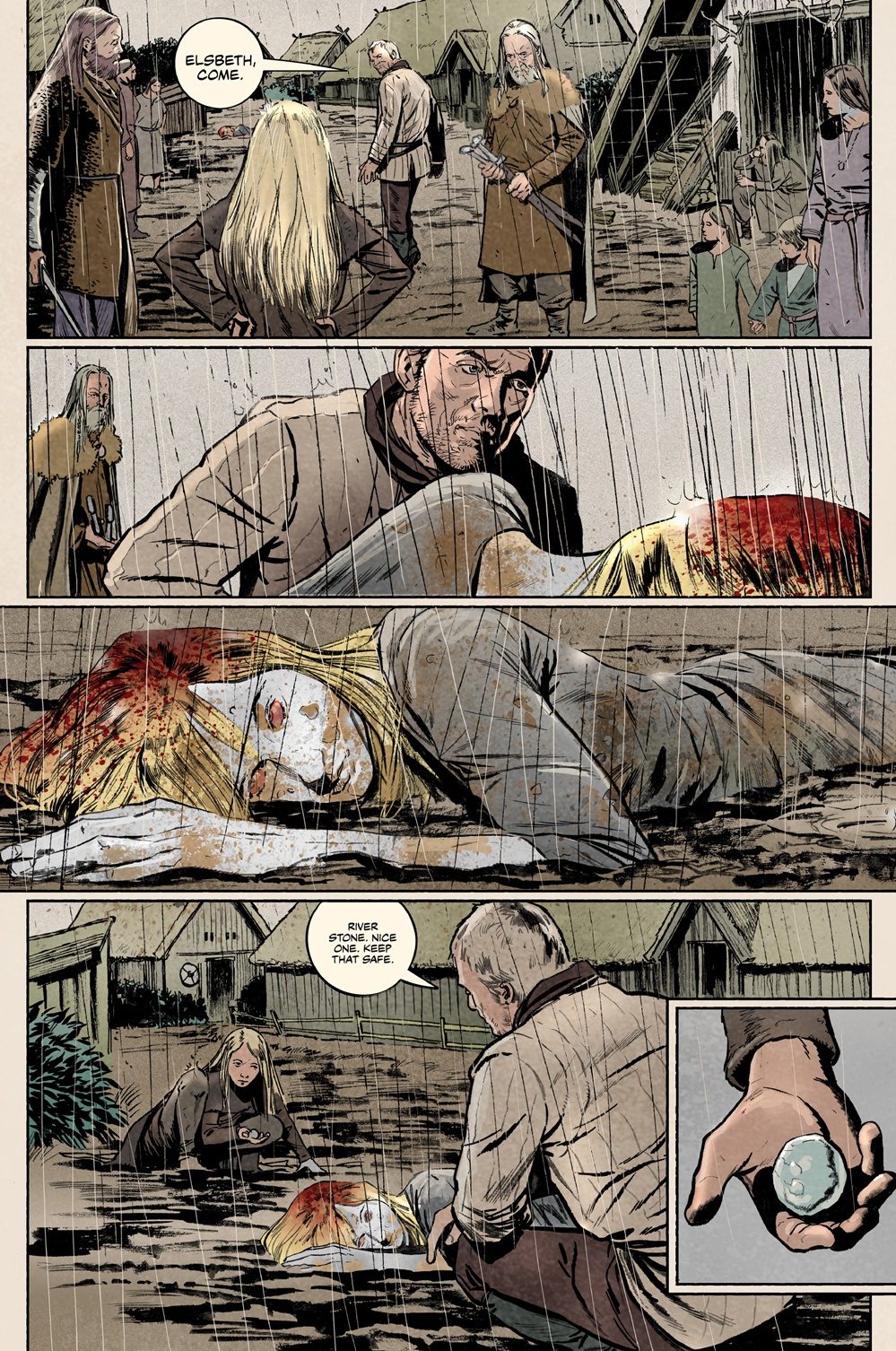 Artwork is, as it was last time, stellar. The stark Scandinavian settings offer up a bleak but beautiful world for our heroes to interact in and artist Mack Chater does a sublime job of translating it to the page. His character work is excellent as well. Every face, either living or not, is rendered realistically and adds a necessary weight to the somber story. Rarely does artwork and narrative so perfectly coincide on the page.

Two issues in and Sword Daughter is definitely trending in the right direction. I continue to be impressed by the strong father/daughter dynamic on display here, which helps it to feel more personal to me. Personalities are also beginning to become fleshed out as we get a side story that allowed our heroes to reach beyond their own needs in an effort to help others and stop a killer. It may seem a little early to deviate from the main path, but when the story is this entertaining and the artwork is this good, that’s hardly something worth complaining about.