I very much did not care for the first issue of this new Nancy Drew series. I found the updated characters unnecessary and poorly done and I found the mystery itself to be too vague to capture anyone’s interest as well as being ineptly introduced. However, the tone of the book and a few of the side characters left me hoping that after a rocky start the series would find its footing and finish strong. The second issue squelched those hopes like a foot planted onto a plump caterpillar as issue #2 of writer Kelly Thompson’s Nancy Drew story was only marginally better than its predecessor, but also worse in several aspects.

The mystery of what happened at the end of the first issue is revealed on the first couple of pages of issue #2. That is to say, the book tried not to show its hand, but the revelation was painfully obvious and I had to try to pretend I didn’t know who the culprit was so as to extract as much enjoyment out of the mystery as I could. The mystery itself (an important aspect of any mystery story) does begin to take a little better shape in this issue, and although it showed a few flashes of promise here and there, it limps along unsatisfactorily as every discovery and revelation is an eye rolling affair. Thus far, nothing that has been uncovered by Nancy Drew has been even remotely benefiting of her famously analytical mind as it takes all the deduction prowess of a stick of butter to figure some of this stuff out. 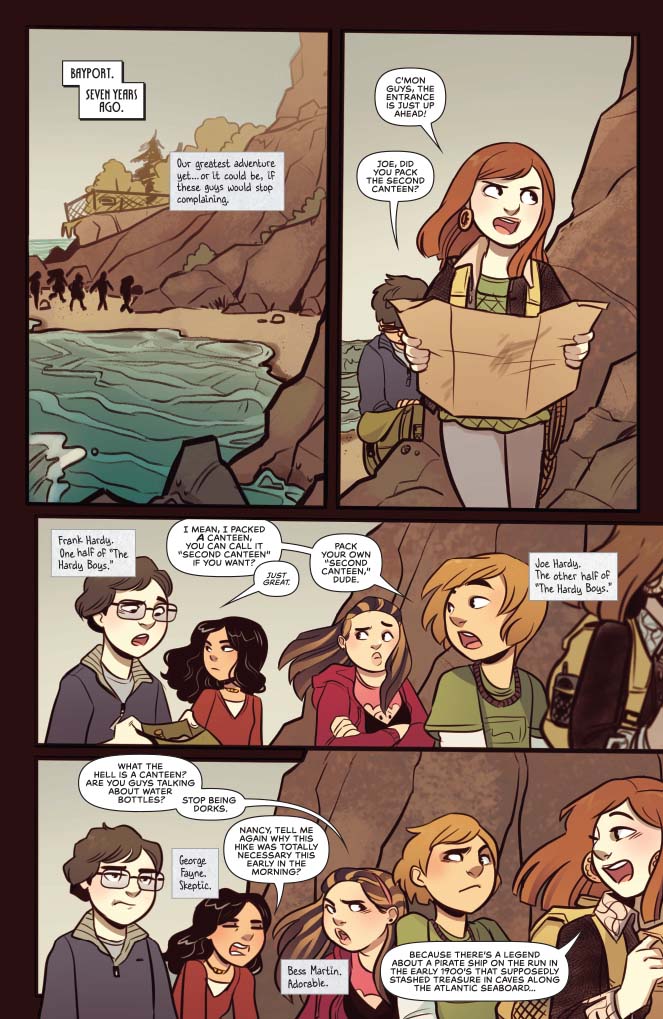 As I said earlier, a few of the side characters had left me with a glimmer of hope after the first issue, but save for only a couple of them, they are a largely annoying and surprisingly useless lot. The Hardy Boys are in on the antics and that right there should dictate that they can add something to the sleuthing since they are famously… y’know… detectives. Unfortunately, they add nothing of value to the proceedings and seem as clueless as everyone else. They are, like Nancy to her own namesake, the Hardy Boys in name only. Nancy’s friend Bess, however, is a bright spot in the otherwise cringe-worthy group of friends. She’s a sweet-natured cutey and her awkward “romance” with Joe Hardy is one of the only aspects of the book I found myself enjoying.

And as long as we’re on the subject of redemptive aspects of this book, I would be remiss if I didn’t mention one scene in particular that actually elicited genuine emotions. The beginning of the book is a flashback to when Nancy and the gang were kids and although things start off light-hearted enough, events take a turn towards the tragic as Nancy finds out what happened to her mother. It’s constructed fantastically from the dialogue to the art and it succeeds in making you feel sorry for Nancy, as well as highlighting her driving insistence that there be a logical explanation for everything that happens to us on this world. 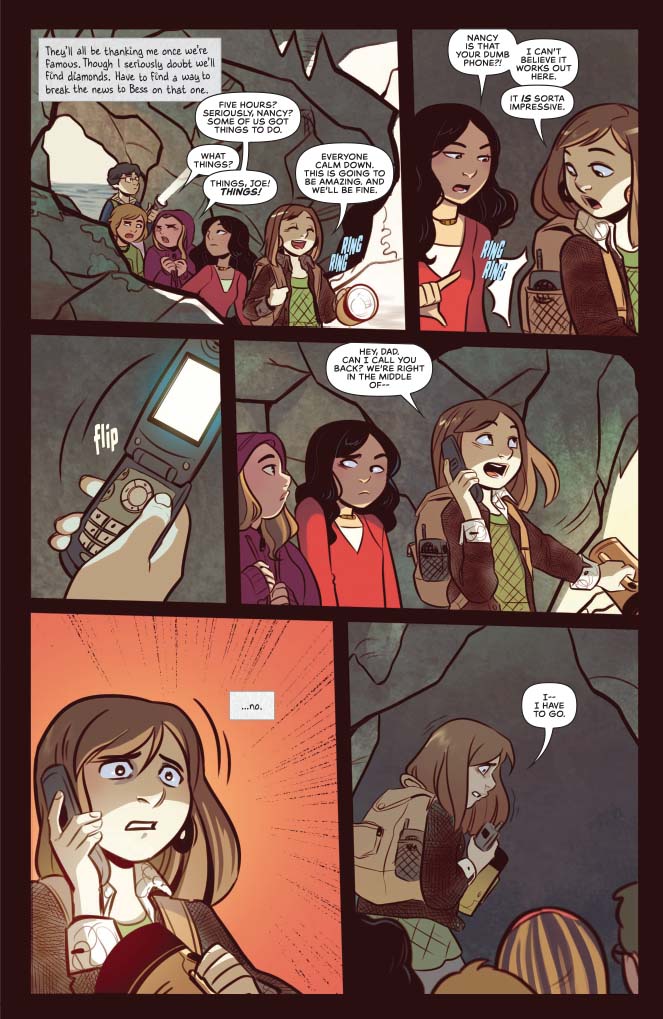 The artwork also continues to impress me. Jenn St. Onge is absolutely fantastic here, as she generally is. Characters emote extremely well and every page looks like the storyboard for a Disney movie. I understand that St. Onge’s style may be a little bit too “cartoony” for some, but I very much enjoy it.

Once again, I’m left wondering who this comic run of Nancy Drew  is for. I was hoping the mystery would sink its teeth into me in this issue, but there really is nothing here to drum up any interest. It seems that the entire existence of a mystery is in place as an excuse to consistently remind us all of how hip and millennial these new renditions of classic characters are. It does a great job of highlighting the creator’s overly-transparent social views, but so far… that’s about it.