I love a good B-movie! Not the ones that try to be campy, those are trash, but rather, the ones that commit to an over-the-top idea and go all in. There’s something genuine about those films that cannot be replicated even when people try their hardest. MCMLXXV is the comic book equivalent of everything I love about those movies. A monster fighting New York cab driver who fights the evils with an enchanted tire iron could have been the basis for an exercise in silliness, but veteran writer Joe Casey jumps into the story with both feet and takes the over-the-top premise very seriously, while also reveling in the undeniable absurdity of the whole affair!

Pamela Evans is not your typical cab driver. While taxiing people around the Manhattan streets of a beautifully realized 70’s era New York, Pamela spends her spare time fighting monsters. She makes no bones about it and deals with the supernatural threats as calmly and professionally as someone might be expected to turn in an office report to their boss. She’s a fun character to get to know, but I can’t help but feel that she comes off a little one-note. It’s fun watching her beat down the baddies and toss ninjas around, but she just tends to lack a bit in the personality department. Her stoicism is probably a deliberate design choice in her characterization, but as the main character in a new story, I just wanted more from her. 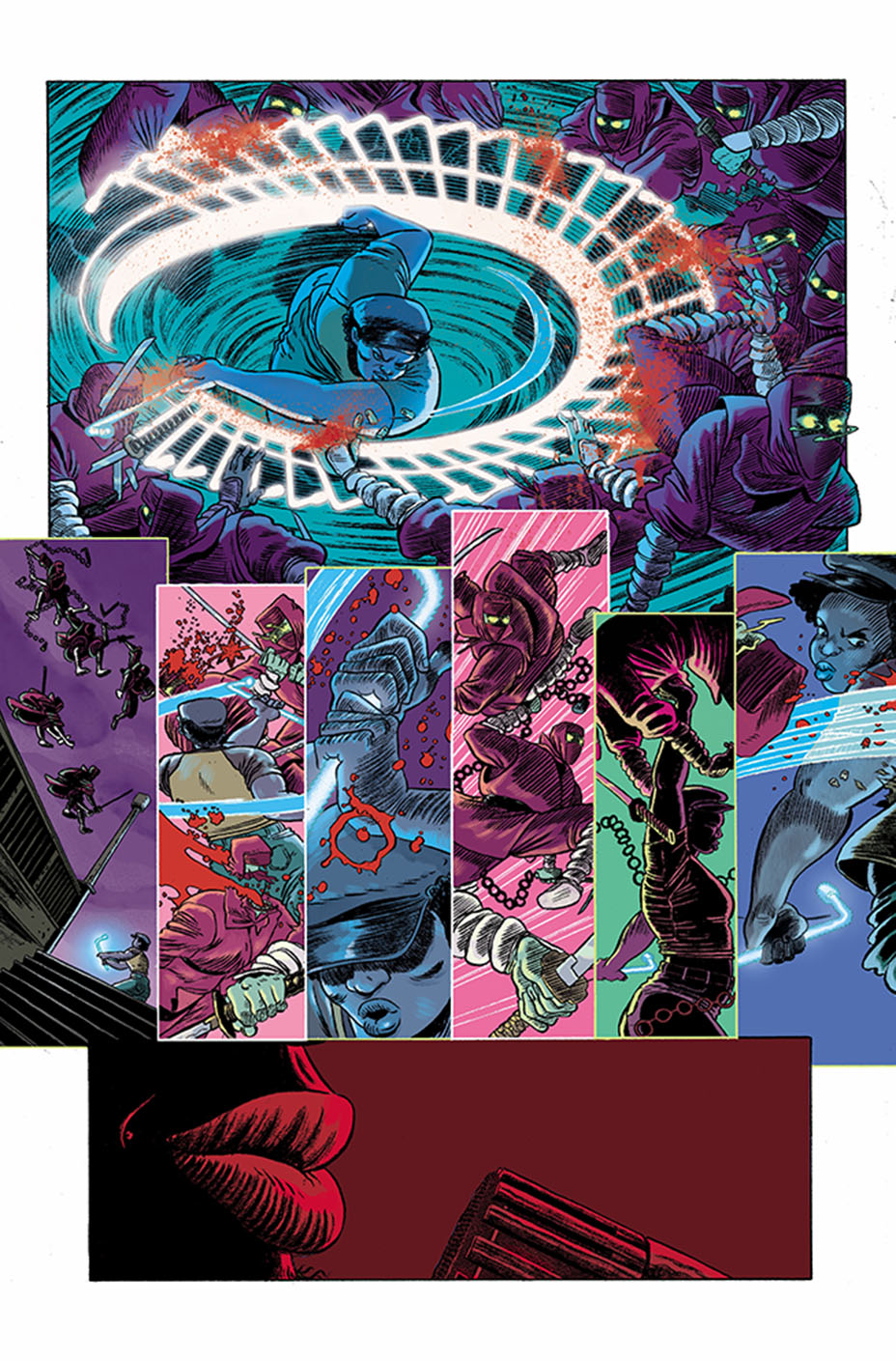 Beyond that, however, I am pleased with everything else about this premier issue of MCMLXXV. The aspect that I find myself enamored with the most is the aesthetics with which the story is told. Artist Ian MacEwan has perfectly captured the essence of New York City circa the 1970’s. I was immediately transported back to my time spent watching grimy, NYC based movies like The Warriors, C.H.U.D. and even the city portions of the werewolf classic, The Howling. From the cityscapes, the heavy uses of reds and oranges, the tight fitting outfits, and the general filthiness of the city, everything pops off the page in an extremely satisfying way. That is to say nothing of the great character models for both the humans and the monsters. They’re not exactly hyper-realistically rendered, but their slightly exaggerated, semi-cartoony presence fit the tone of the book to a “T”.

Complimenting the fun main storyline is a quick look at Pamela’s past and a bit of insight into how she became the monster-fighting cabbie that she is today. We didn’t get as good a look at this portion as I would have liked (I’m impatient sometimes) but it looks to take some inspiration from another genre staple of the 60’s and 70’s, specifically the Kung-Fu films. It may sound like a strange mash-up of a lot of weird elements, but trust me, it’s all pretty awesome and it works better than it should. 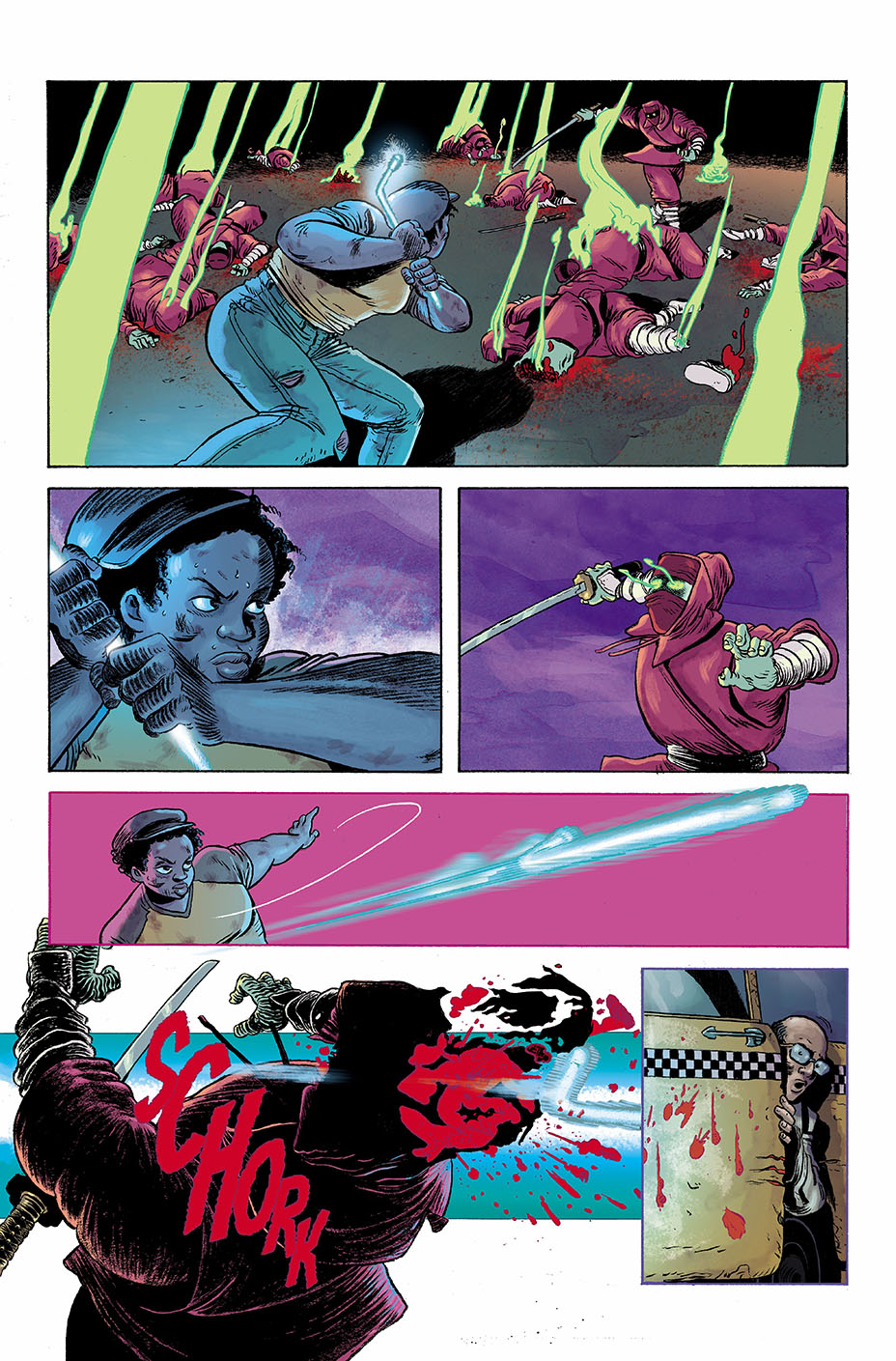 Beyond Pamela, there are also some fun side-characters who keep the proceedings lively in MCMLXXV. Besides young Pamela’s sensei, she also has a smooth talking boyfriend who spins records and narrates most of the book with his late-night radio vocals. The use of his dialogue, in particular, give the book a flavor all its own and his constant voice over is a nice contrast to Pamela’s more quiet, stoic nature. Everything culminates in a cliffhanger that promises to take things to a whole other level in upcoming issues. The stakes look to be very big for Pamela, as well as the rest of the city, and the monsters look to become all the more threatening as well as ever-creatively rendered.

There are a lot of elements at play in MCMLXXV and a lot of genre mashups, but the book has it’s own unique voice, even while bothering so many tropes from well known genres. The entire issue reminded me of a movie I would have loved to have watched on the Syfy channel late at night, or even better, would have rented off the dusty shelves of the horror section of my boyhood VHS rental store. It is a nostalgic trip that manages to make itself feel incredibly new, while also being wonderfully familiar. The final pages left me wanting more and wondering what kind of tone this book will ultimately settle on, but whatever that happens to be, Joe Casey and Ian MacEwan have my attention.