We got to chat with Mitch Breitweiser about the upcoming project and his plans for future installments moving forward.

Bounding Into Comics (BIC): First off, what exactly is Red Rooster, what can we expect from the series?

Mitch Breitweiser (Mitch): Firstly, a huge thank you to Bounding into Comics for this opportunity.

When we find The Red Rooster he is a celebrated vigilante folk hero. He and his compatriots are essentially celebrities that have turned their heroic hijinx into commercial success during the rise of mass media in the early 1930s. He’s the spokesman for a cola brand and they are the subject of newsreels and radio plays. 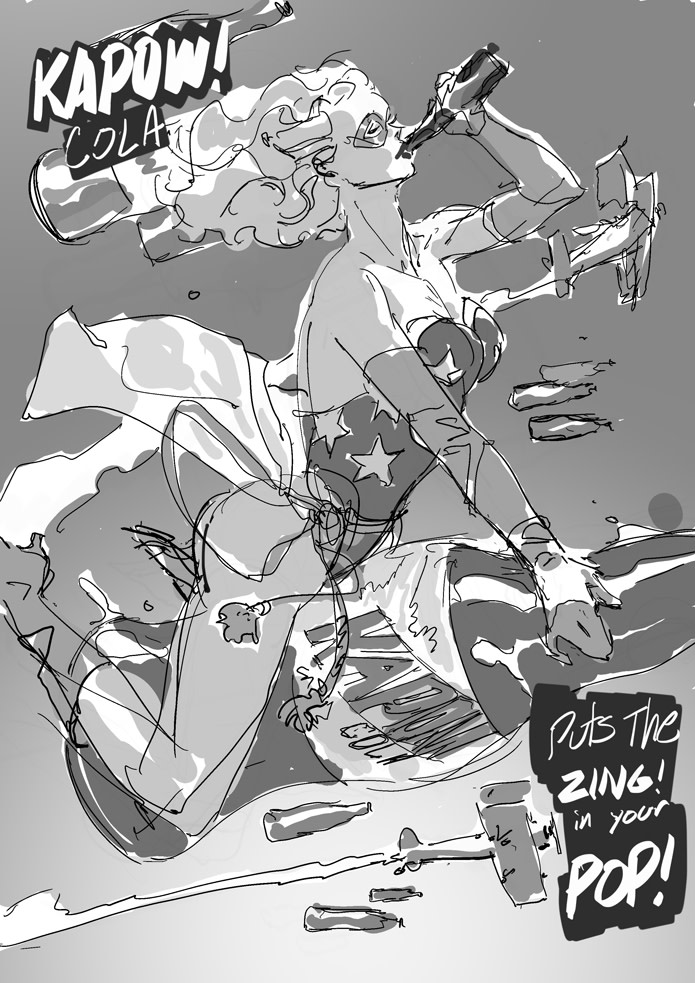 The problem though, is that the Red Rooster is a noble mantle and code that passed from one generation to the next, and commercializing his success betrays that somewhat. His team is beginning to fracture, and perhaps success has made him a little soft. A villain we call “The Foundation Man” sees this chink in RR’s armor and decides to exploit it by bringing together a cabal of the Rooster’s most notorious villains.

BIC: Tell us about this cabal. What kind of villains will we see? Will they have superpowers or will they be Lex Luthor or Joker type villains?

Mitch: There is quite a bit of variety amongst the Rooster’s “Batman-style” rogues gallery. The 4-D Man is a deranged scientist who has stolen Tesla’s top secret blueprints from the U.S. Government and harnesses their powers for all kinds of villainy. His sexy sidekick is Jackal-Rabbit, a stage magician whose quite possibly gone mad. Vermin-Eater is one of my favorites to give voice to. I think he’s self-explanatory. Phantom Footsteps and Slug-Mug round out the crew, but I’ll leave a few surprises. This motley bunch have been gathered into a single cabal by “The Foundation Man,” whose means and motives are far more ancient and malevolent, and he is seeking to destroy the Rooster legacy forever.

BIC: I really like the design of the character with the white suit, red cape, and red trunks and the brown almost cowboy boots. It also looks like he uses a lasso. What inspired this design?

Mitch: Thank you. It’s an amalgamation of my time on Captain America and my roots here in Arkansas. I wanted to evoke a hero for the everyman. For Main street America. Something that evokes the kind of nostalgia that we found in characters like The Rocketeer and The Phantom. 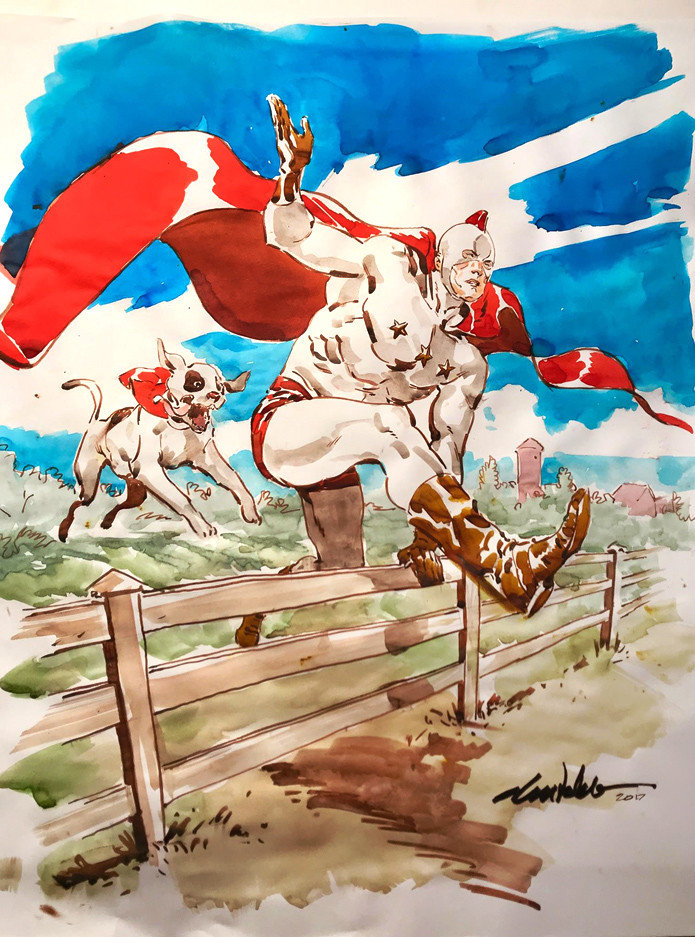 BIC: What other characters besides Red Rooster will we see? I know I’ve seen a dog running alongside him.

Mitch: Rascal is his dog and most loyal friend. Rascal was named after my wife Elizabeth’s childhood pet raccoon. His female supporting cast member is Miss Midnight, a acrobatic wing-walker and pilot. She’s a bit caught up in the fame as well. There is also Pilgrim Shadow A gun-slinging cowboy with a mysterious past. He’s the Rooster’s rock in many ways. 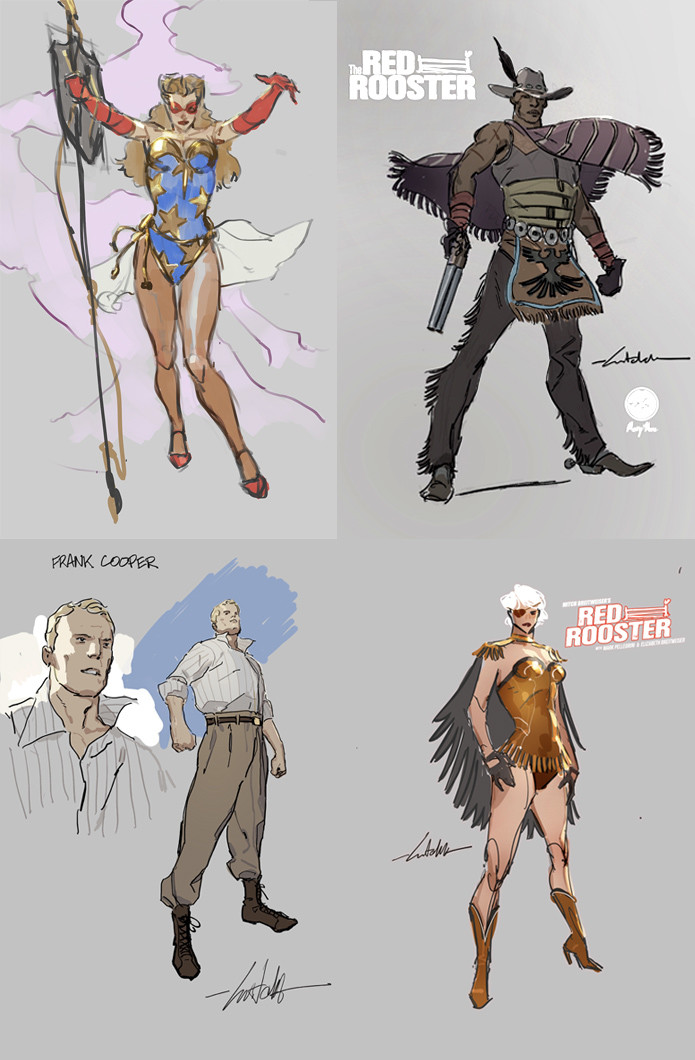 The Red Rooster mantle must be passed down though, and so he must select and train a protege. That role is filled by Strong-Boy Thurman. An Orphan that RR discovered in a vaudeville act that he took under his wing. When we pick up the story, Strong-Boy is no longer a boy. He’s a man that is asserting himself and questioning the Rooster’s decisions, furthering the rift between RR and his team.

BIC: I was interested in Marcus who looks like some type of mechanic. What can we expect from him?

Mitch: Marcus will play a really large part in the Rooster’s story, but he will not appear in this 60 page special. We pick up on Marcus’s story at the beginning of the next chapter. We actually plotted that narrative first and then doubled back flesh out the critical sequences of the 60 page Indiegogo special that set up our larger story. 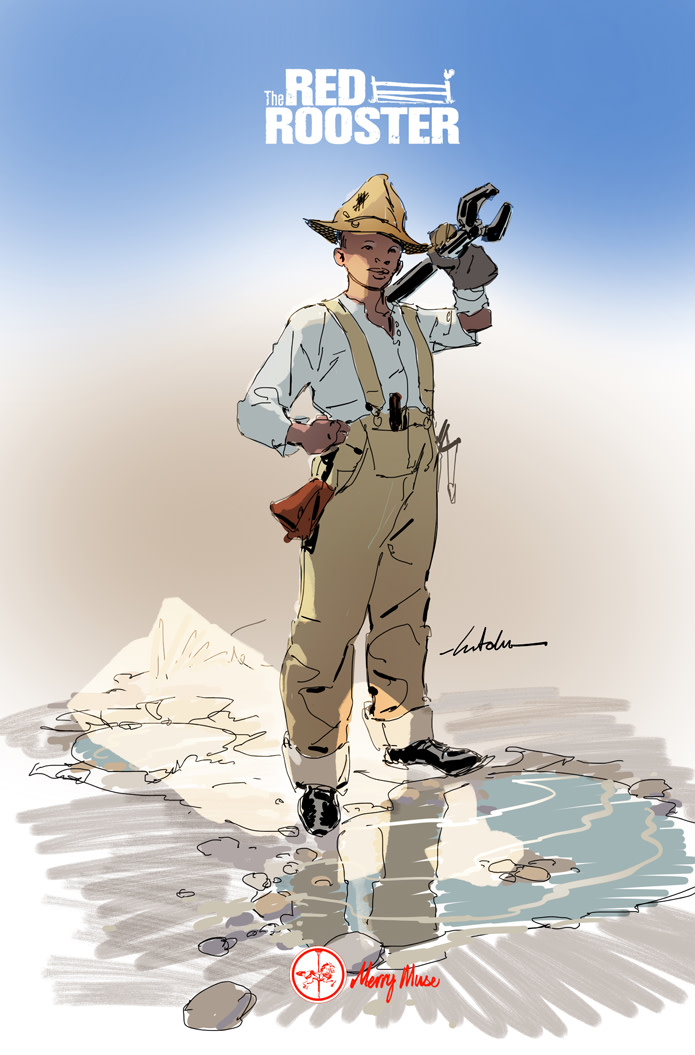 What is the Order of the Dawn?

Mitch: The Order of the Dawn is part of the legacy of the Red Rooster. A secret order passed down for centuries. Only Red Roosters and his most trusted allies are members. Perhaps some past presidents and other world historic figures were bearers of this secret honor code as allies of pas RRs. It’s become a kind of meta-experience that I am indulging in online with supporters and friends. Backers at the “Order of the Dawn” tier on Indiegogo will be “inducted” into the society, receiving a nice die-struck lapel pin and getting name-checked in the back of the book. 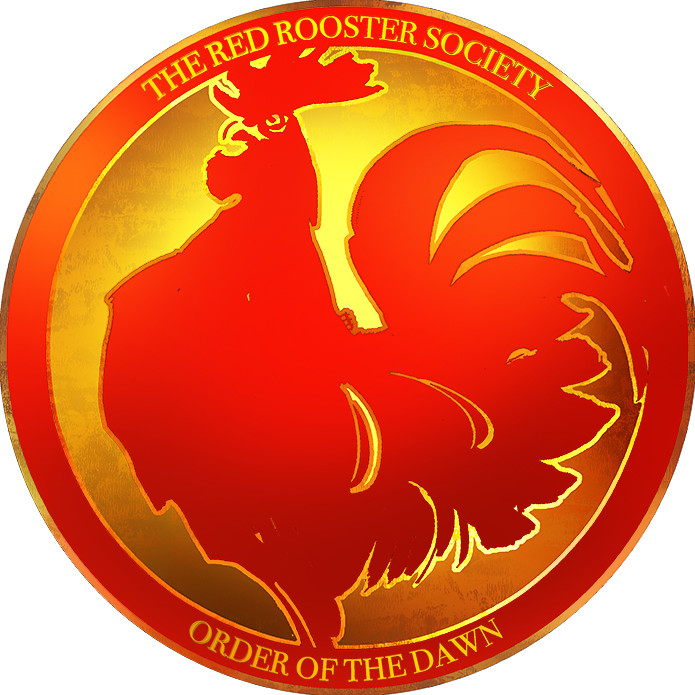 BIC: Will the setting mainly take place out in the country or on a ranch? Or will we see our heroes venture into the cities?

Mitch: There will be a variety of backdrops for our heroes. Big Town is central to it all. It’s Frank Cooper’s (aka The Red Rooster) hometown. Big Town is meant to be Main Street, Anywhere USA. A place that you can project your own visages of what an idilic township is. We’ll also get a glimpse of the Rooster amongst the glitz and glamour of Studio City and much more. His team is well traveled and aren’t always “down on the farm,” as their visual themes might suggest.

BIC: What kind of Easter Eggs can folks look for once they get their hands on Red Rooster?

Mitch: We’re in it more for the chicken puns than the easter eggs. I suppose if reader’s really scratch around, they might find a few to peck at. 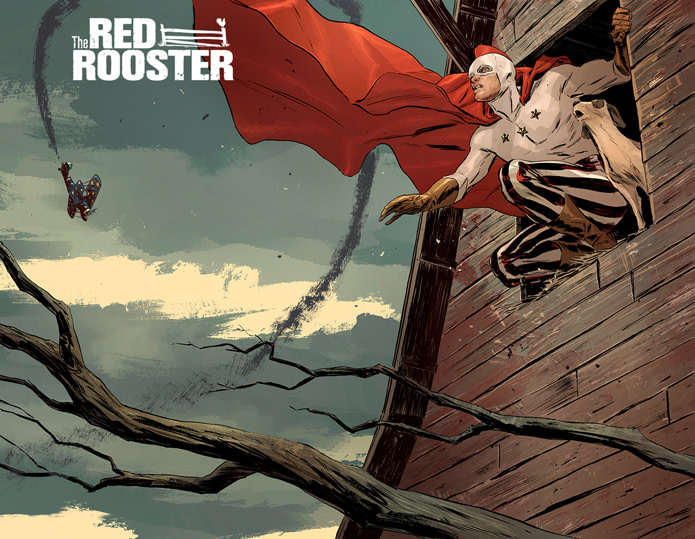 BIC: Will you be working with a publisher for Red Rooster following a successful fundraiser?

Mitch: I want to get this book in front of as many people as possible, especially young people, and by any means necessary.

Mitch: I’ve promised our backers that they will receive their copies in March of 2019, but I’m underpromising and planning to over-deliver. Their copies will be unique and special first editions. I’d like to roll out a mass-market edition soon after.

How can you not be excited about Red Rooster after that? I know I can’t wait to explore Big Town and meet all of these colorful heroes and villain! You can still fund Red Rooster on IndieGoGo and reserve your copy today.