World of Warcraft sales are off the charts. Last week, Blizzard’s highly anticipated expansion, Battle for Azeroth, went live. Known lovingly as BfA, the expansion is the latest addition to the long-standing World of Warcraft MMO, which still reigns supreme as the largest MMORPG in the world.

In a news release from Activision/Blizzard, it was revealed that BfA had sold over 3.4 million units in a single day. Not only is that a franchise record for World of Warcraft, but it makes it one of the fastest-selling PC games of all time.

Battle for Azeroth represents the latest chapter in an evergrowing story that sees two global superpowers compete for power and survival.

“Battle for Azeroth is a definitive chapter in the Horde and Alliance conflict at the heart of Warcraft, and it’s been thrilling to see players representing their factions in record numbers and embarking on their war campaigns—not to mention joining in ourselves… But the launch is just the beginning of this conflict. More epic content is coming to World of Warcraft in the weeks ahead, and we can’t wait for players to experience the full story as it unfolds over the course of the expansion.”

But that’s not all. The release describes new features that have been tested in the beta, but yet to be introduced live, will expand the game even more. Warfronts will see players engage in 20-person co-op battles for control points in the Arathi Highlands. Veteran players might find this familiar to the opening of Gates of Ahn’Qiraj over a decade ago.

Also coming will be the first Player versus Player season on September fourth, which will see players continuing the battle to save a dying world.

As for me, I’ve already have gotten my main, a paladin of course, up to max level, and experiencing many of the features that I’ve tested on beta. For an old PvP’er like myself, the Warmode option was by far one of the best quality of life improvements I’ve ever seen in the game.

Warmode allows you to opt in or out of world Player vs Player combat, and can only be toggled in one of the two major capitals, Stormwind and Orgrimmar. Without the restrictions of PvP or PvE servers, I was better suited to play with friends across servers who opted in or out of Warmode.

Another feature I’ve played with has been the Island Expeditions, which are also new to this expansion. Working on a similar random level design set up seen with another Blizzard IP, Diablo, these island expeditions allow players to explore randomly generated islands that give out a variety of rewards. Such as gear, toys, pets, and even mounts.

I’ll leave you with this screen capture of me and Flap-Flap, the resident flying monkey in Zandalar. [easyazon_link identifier=”B07BZ8QM9D” locale=”US” tag=”boundingintocomics-20″]Get your copy of World of Warcraft: Battle for Azeroth here and help support Bounding Into Comics![/easyazon_link] 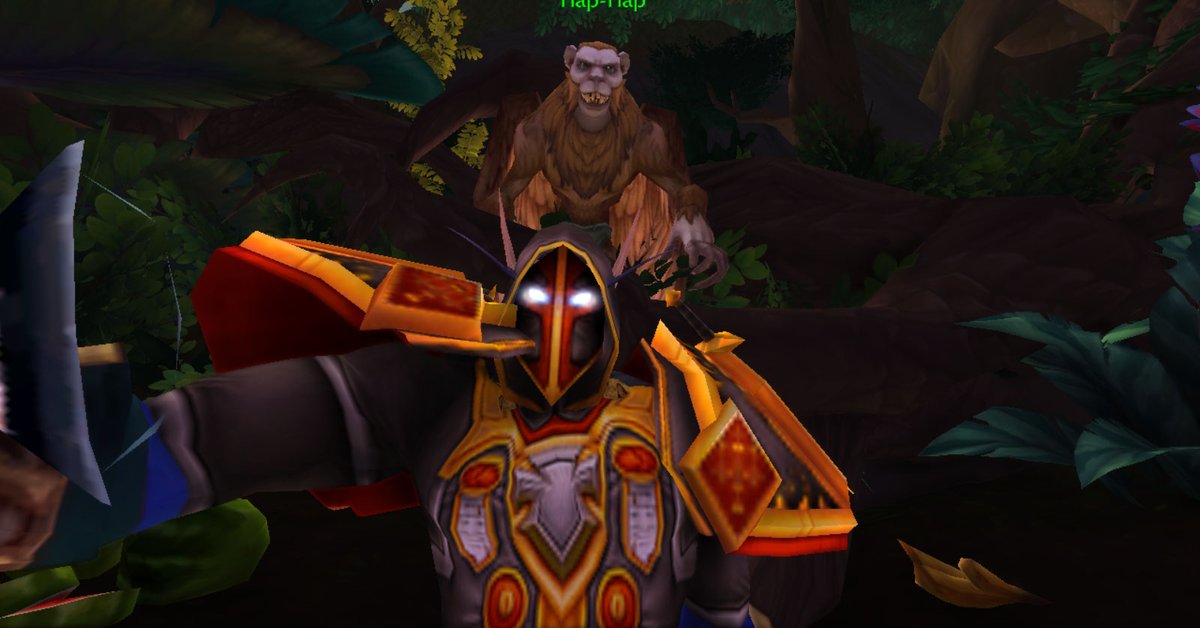