I love Captain Marvel. Carol Danvers is one of the best characters to come out of The House of Ideas. The first Carol Danvers story I bought was [easyazon_link identifier=”B00ZNS24P8″ locale=”US” tag=”boundingintocomics-20″]Ms. Marvel #1[/easyazon_link] in 1977 and I’ve stuck with her ever since. I’ve followed her adventures through The X-Men, The Avengers, and hundreds of guest appearances. She’s my favorite superhero and I just love her. I think you all could love her too. I realize Marvel hasn’t really given you much to love, especially lately. But, I think all of you could come to see how cool Carol Danvers is as a superhero too. They just need to fix some things first. 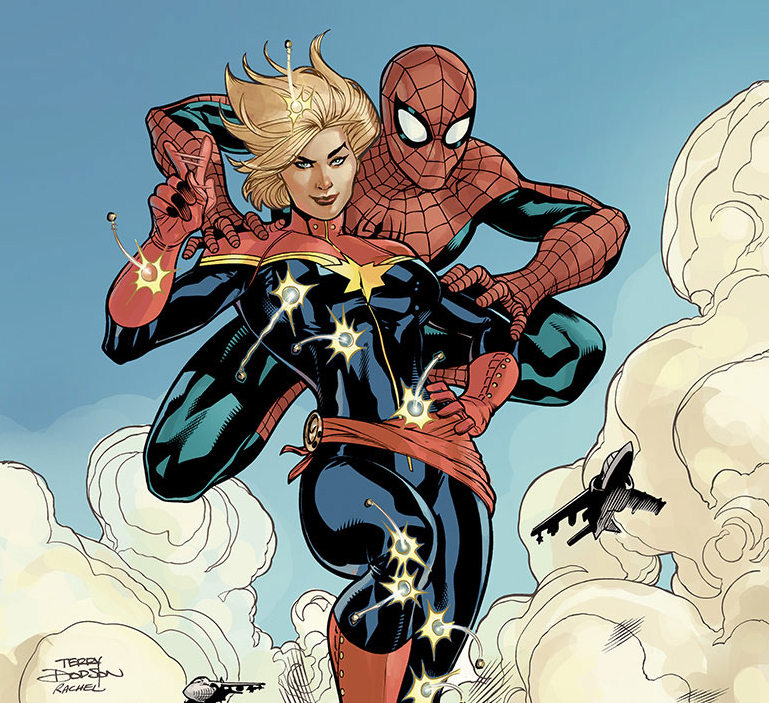 There’s no denying Marvel Comics has a Captain Marvel problem. Carol Danvers hasn’t had a stable continuing series since Brian Reed’s [easyazon_link identifier=”B00AAJR202″ locale=”US” tag=”boundingintocomics-20″]Ms. Marvel[/easyazon_link] ended with issue 50 in 2010. The cinematic arm of Marvel has a $100 million + movie coming out this March, starring a Oscar-winning actress Brie Larson and a digitally de-aged pair of fan favorite S.H.I.E.L.D. agents in Samuel L. Jackson’s Nick Fury and Clark Gregg’s Agent Phil Coulson.  On the surface, you would think that an upcoming movie would be impetus enough to spur Marvel Comics editorial into getting a stable Captain Marvel core book back into production. It is after all a natural dovetail with a movie and a potential hook to new readers. Unfortunately, there are some big roadblocks standing in the way of a stable Captain Marvel comic book series.

Captain Marvel has never really held any sort of blockbuster status in the Marvel Universe. The Brian Reed Ms. Marvel series saw the usual sales spikes associated with a #1 issue and several issues with multiple covers, but it eventually stabilized around 25,000 issues sold. Mind you, these are issues sold to comic book stores, not necessarily what readers purchased.

The same thing happened in 2012 when Kelly Sue DeConnick rebooted her. DeConnick’s [easyazon_link identifier=”0785190139″ locale=”US” tag=”boundingintocomics-20″]Captain Marvel[/easyazon_link] series was a labor of love. She was on point with her characterization of Carol Danvers. DeConnick refocused on Carol’s history, bringing back her Air Force tenure. Generally speaking, she set the building blocks in place to revitalize Carol’s heroic foundation. She even gave her a new costume. DeConnick’s series stabilized at right around 22,000 issues sold until the book was inexplicably ended with issue 17 and restarted the following month. The new series saw an initial spike in sales, again due to a #1 issue and multiple covers offered to retail stores for varying tiers of units ordered. But again, it stabilized at around 22,000 issues sold. DeConnick left the series with issue 15 to concentrate on her own creations and Marvel unceremoniously canceled the book. 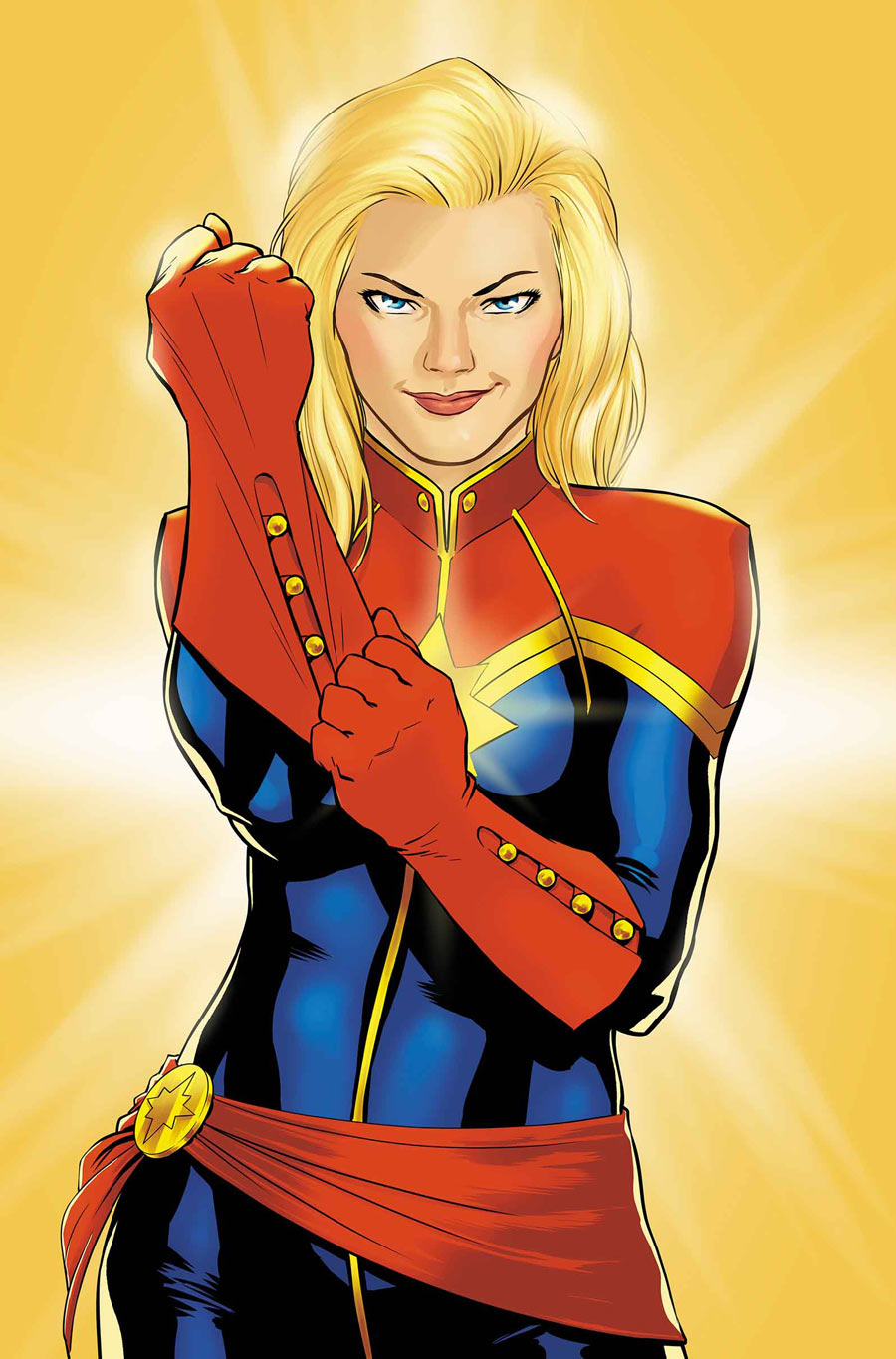 A few months later, Marvel once again rebooted Captain Marvel. This time they tried stunt casting with the dream team of Tara Butters and her writing partner Michele Fazekas, the masterminds behind the excellent [easyazon_link identifier=”B079T6V34M” locale=”US” tag=”boundingintocomics-20″]Agent Carter[/easyazon_link] series on ABC. This would ultimately prove disappointing as Butters and Fazekas immediately dropped their main character into a team book by focusing on her taking over command of the new Alpha Flight. They ignored a lot of the work that Kelly Sue DeConnick put into revitalizing Carol Danvers as a hero, although they did sew a few seeds of potential by bringing back Monica Rambeau. Not surprisingly, Butters and Fazekas left after five issues at the beginning of the Civil War II storyline. Ruth and Christos Gage carried the book through the Civil War II crossovers and once again Captain Marvel was canceled at issue 10.

[easyazon_link identifier=”1302901575″ locale=”US” tag=”boundingintocomics-20″]Civil War II[/easyazon_link] was supposed to be a starring vehicle for Captain Marvel. Instead, it worked as an extended character assassination. During the series Carol was consistently written as pushy and overbearing, arrogantly forcing her will not only on other heroes but also on the people she was supposed to be protecting. She made a plethora of extremely out of character bad decisions, one of which resulted in the death of her romantic partner James Rhodes, War Machine. By the end of the Civil War II crossover event, the damage was extensive and Marvel left the Carol Danvers character as little more than an unlikeable thug. 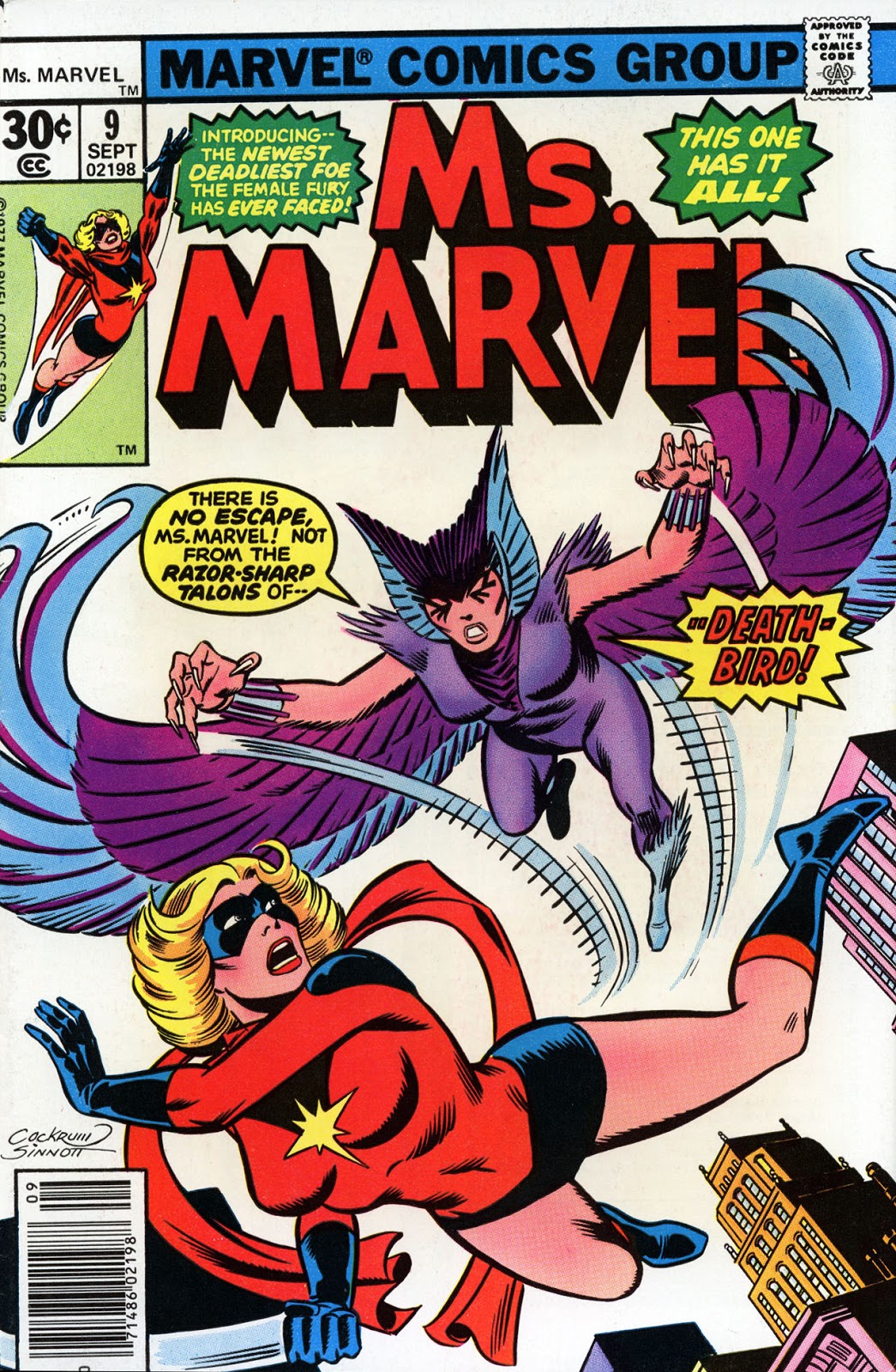 In 2017 Margaret Stohl took the reigns with [easyazon_link identifier=”1302906054″ locale=”US” tag=”boundingintocomics-20″]The Mighty Captain Marvel[/easyazon_link]. Fresh off her outstanding Black Widow novels, Stohl should have been an excellent choice to repair the damage to Carol’s character. Rather than rebuild Captain Marvel’s reputation, Stohl simply ignored most of the Civil War II story. She immediately piled on more unnecessary character flaws and her take on Captain Marvel ultimately proved tone deaf. The story degenerated into an abysmal morass of ill-conceived plotting, inexcusably poor dialogue, and a general unwillingness to embrace the character’s established history. From a sales perspective, The Mighty Captain Marvel #0 initially sold about 53,000 comics. (Again with multiple cover incentives for ordering more books.) The series bled readers until crashing at an anemic 11,500 issues.

Marvel then made the mind-boggling decision to continue Stohl’s storyline. They brought back the Captain Marvel core book for several issues before once again putting it on hiatus. Currently, Stohl is writing a high profile mini-series, attempting to once again re-define Carol Danvers’ origin. Two issues in, Stohl has continued to simply heap more character flaws and backstory family problems onto her. She continues to ignore Carol’s history and has given no inkling that she’s willing to even try to improve her plotting and dialogue. Stohl has done nothing to reinforce Carol Danvers as a hero and she merely continues to build a deeply flawed, unrelatable and highly unlikable character.

Now to the real question, “Can Carol Danvers Captain Marvel be salvaged?” Absolutely, Margaret Stohl is a fine writer. Her [easyazon_link identifier=”0316077038″ locale=”US” tag=”boundingintocomics-20″]Beautiful Creatures[/easyazon_link] young adult series is well written and wildly popular. She can write a great superhero story, just look to her Black Widow novels. I think what would help her succeed the most is to pair her with a writing partner, even if it’s only temporarily. She needs someone like Devin Grayson or Terry Moore to help her. She needs someone who is great at comics dialogue and plot, someone who can pace a superhero comic book. Stohl needs to build Carol Danvers up, not continually tear her down. She also needs an editor with some passion for the character who will step in and edit!

Captain Marvel should always be the one character that when she shows up, everybody says, “Oh thank God, it’s Captain Marvel!” The book needs small scenes of her acting like a hero, rescuing people from burning buildings, cats from trees and the like, juxtaposed with her big cosmic fights. When the Chitauri invasion force comes crashing through downtown Manhattan, the first thing on her mind should be getting the civilians to safety. She should be the last hero off the battlefield after Damage Control has finished the cleanup. 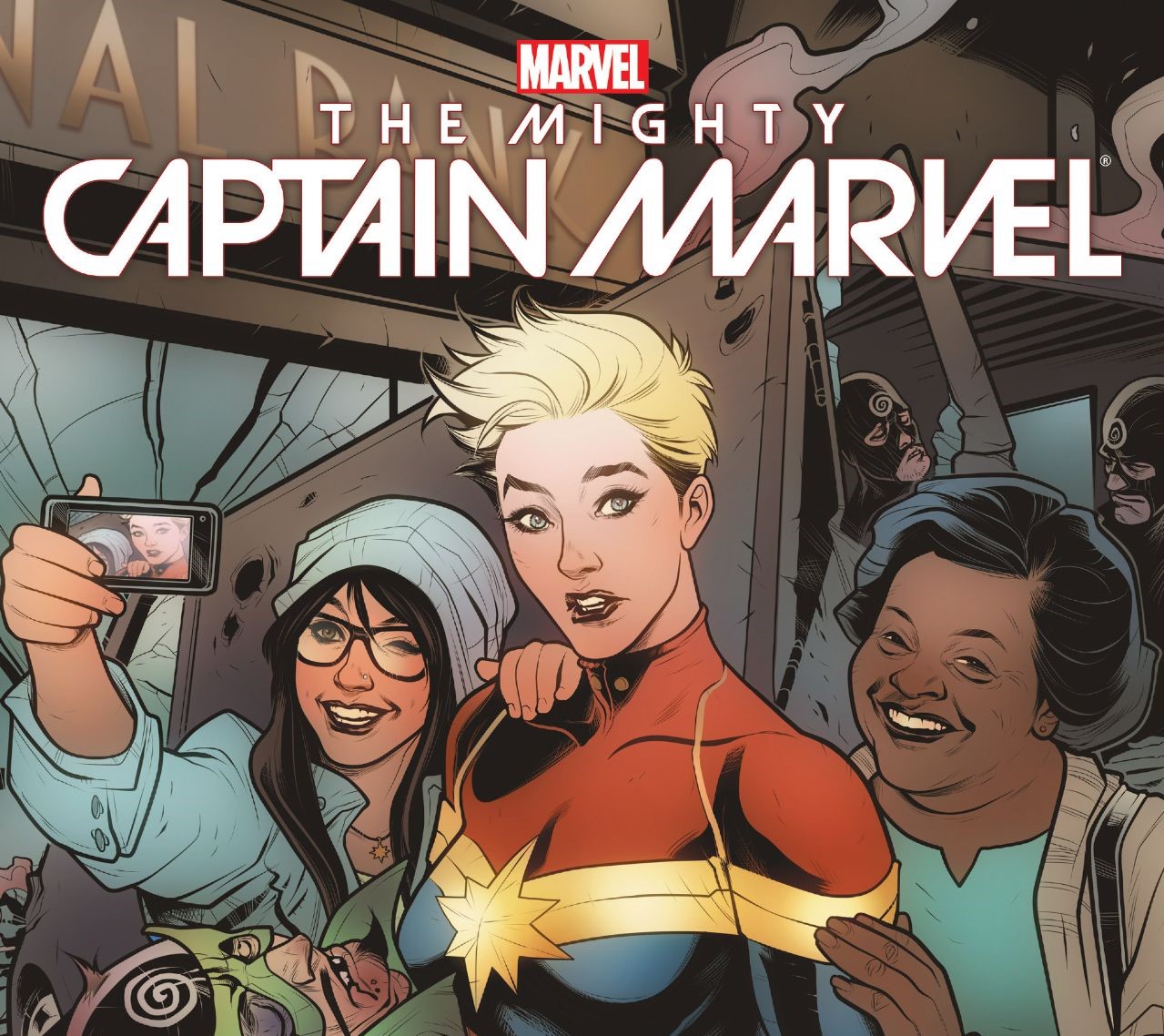 Captain Marvel needs a supporting cast. Carol needs superhero and non-superhero friends to interact with, people she sees as peers, not simply soldiers or minions. She needs people she calls family on Titan and maybe even in Kree space. The lady was, after all, trained at the hip of Mar-Vell, one of the greatest Kree heroes ever.

On Earth, she needs family ties with the Inhumans and possibly even ties to the Earth-based Eternals. She also needs a job. The seeds are already there for her to become a best-selling author, something Margaret Stohl knows a lot about, why not use that. A book tour is a fine way to keep your hero mobile, generate good press and allow for plenty of different heroic opportunities. There’s great crossover potential here as Margaret Stohl could easily ghostwrite Carol Danvers’ novels. Barnes and Noble and Amazon would love it. Out of all the comic books in Marvel’s stable, Captain Marvel is in the best position to set up a diversified supporting cast with people from all walks of life and to showcase a diversity agenda organically.

Finally, she needs a rogues gallery. Captain Marvel’s rogues should be at least on par with Spider Man’s, and not too far off from Batman’s. There’s already precedent for some. She’s had long rivalries with Deathbird, Yon Rogg, Mystique, and Sabertooth. At least one relative newcomer Toxic Doxie is a definite contender. She desperately needs an arch-nemesis, someone roughly on her power level that can function as a perennial thorn in her side. She needs her own Joker. The groundwork is already in place for Karla Sofen, Moonstone to take that spot. Someone just needs to pull the trigger. There’s even a reasonably good story idea involving Moonstone that addresses why Carol Danvers keeps losing her memories. 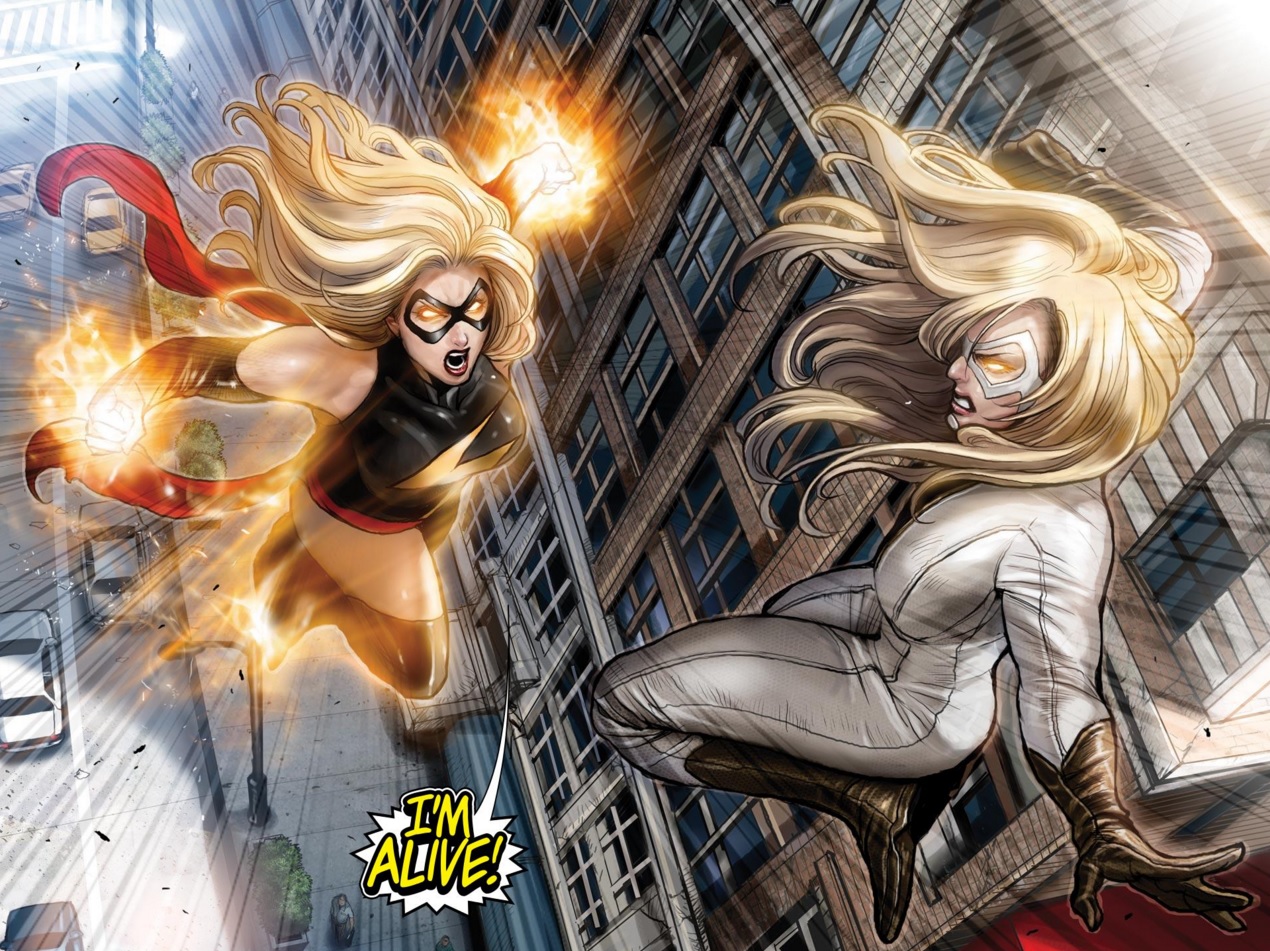 Yes, Marvel has a Captain Marvel problem, but they don’t have to. With a little work and some focus, Captain Marvel could dovetail nicely with the upcoming movie and Marvel could potentially have a best-selling title on their hands. Captain Marvel can bring together fans of stellar cosmic tales featuring Marvel’s classic alien races. She can bring in fans of the Eternals and the Inhumans. She can bring in fans of simple down to Earth bring on the bad guys type stories. Carol Danvers is in a unique place to showcase a diversity agenda without alienating anybody.

Ultimately, if you tell good stories the readers will come, no matter what. If Marvel provides just that, they suddenly have the tentpole character they want. Captain Marvel needs to be the Marvel Comics equivalent of Superman, truly the best of the best! If that can happen, just maybe all of you will see what I see in Carol Danvers’ Captain Marvel. 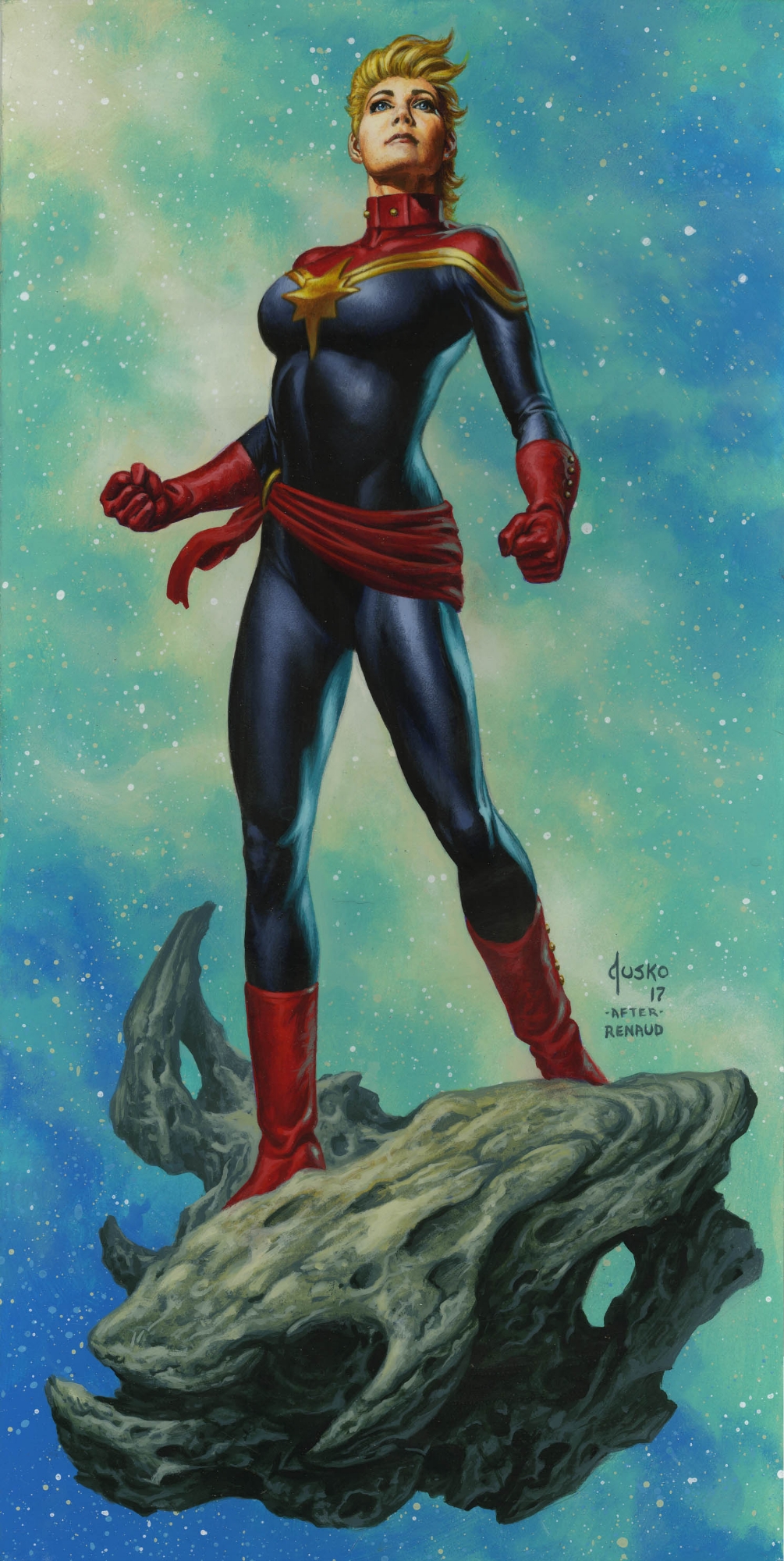