For those unfamiliar with Lady Alchemy, it will tell the story of Lady Alchemy the Burlesque Artist and alter ego of Martina Markota. Lady Alchemy is a rising star in the underground art scene of New York City who begins having visions of a demonic world. It turns out these visions become reality. Lady Alchemy must use her newfound powers to protect New York City by entering the dark realm and confronting a mind controlling media executive. 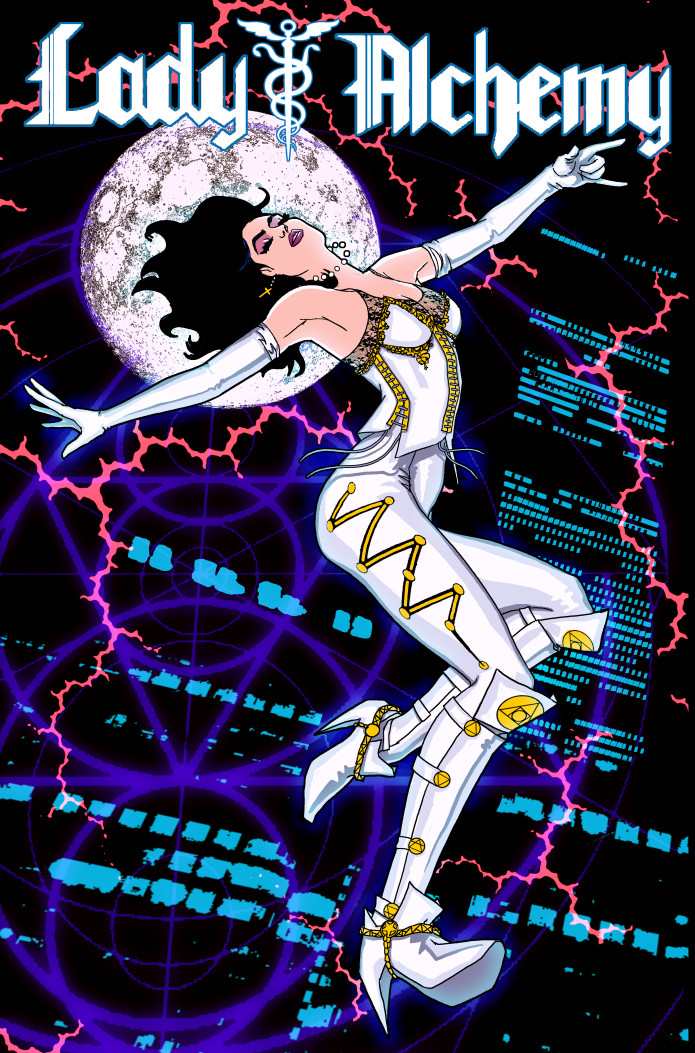 We got the chance to speak with both Lady Alchemy and MG about their upcoming book, the significance behind it, and their future plans.

Bounding Into Comics (BIC): Can you give me a little more insight into the dark realm? What kind of horrors will Lady Alchemy face there?

Lady Alchemy: A lot of this will coincide with my real life, living in NY there is a duality. NYC is my Gotham City, the cement and advertisements are conducive to brainwashing by subliminal forces and when I go upstate into nature, you can de-program by resonating with the vibrations of nature, become closer to “the source.” NYC has so many dark forces when you look deeper, pulling you away from “the source.” Because of this, many people are brainwashed and living as zombies. Having to face these zombies means going into the darker realm and facing the root cause.

Then there is the dark realm, think of like John Carpenter’s [easyazon_link identifier=”B075RSZP2D” locale=”US” tag=”boundingintocomics-20″]They Live[/easyazon_link], except we expand upon the subliminal messages in the media as a form of demonic influence from the dark realm. This is where Martina becomes her Lady Alchemy superhero persona and kicks demon ass. 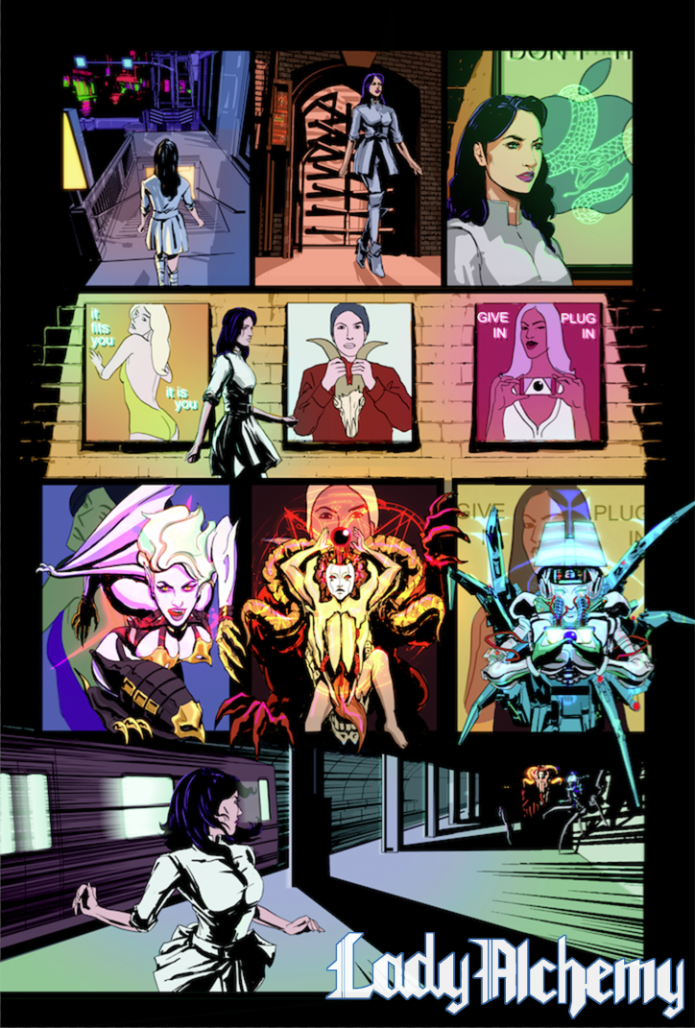 BIC: Are there more threats than this controlling media executive?

Lady Alchemy: This controlling media executive has the power to influence the masses, that means it’s more than one person or one thing. The layers of threat go from the brainwashed masses, to the power/demons of the advertisements themselves, all the way up to the executive.

MG: For me it’s a metaphor for what we are really dealing with in our current cultural environment. There are so many people that seem so brainwashed they might as well be possessed. In reality it’s a conglomerate of corporations but for the sake of our story we condensed it into a single character of a nefarious Media Executive.

BIC: Is there a specific media executive you’ve based this villain on?

Lady Alchemy: Sort of, I don’t have an exact person in mind, but I have the types of people in mind. The people in charge at Conde Naste definitely have an agenda to turn us away from the normal, duality between the sexes. The yin and yang. It is a detriment to both sexes.

MG: In my mind it’s whatever coven of crazy witch feminists that are in charge at Conde Naste.

BIC: What kind of powers does Lady Alchemy have up her sleeve that will allow her to take on the creatures from this dark realm?

Lady Alchemy: By day, Lady Alchemy is a journalist, by night, a burlesque dancer with esoteric costumes. By day she digs deeper into figuring out what is going on in the city, investigating the root of weird things going on. By night, she is a part of the nightlife, where strange things happen and is immersed in the full spectrum of demonic forces.

Her special powers are alchemical knowledge and powers. The use of manipulating elements, high ritual magick, summoning spirits and even the four archangels (Gabriel, Raphael, Michael, and Uriel) as protection and help. 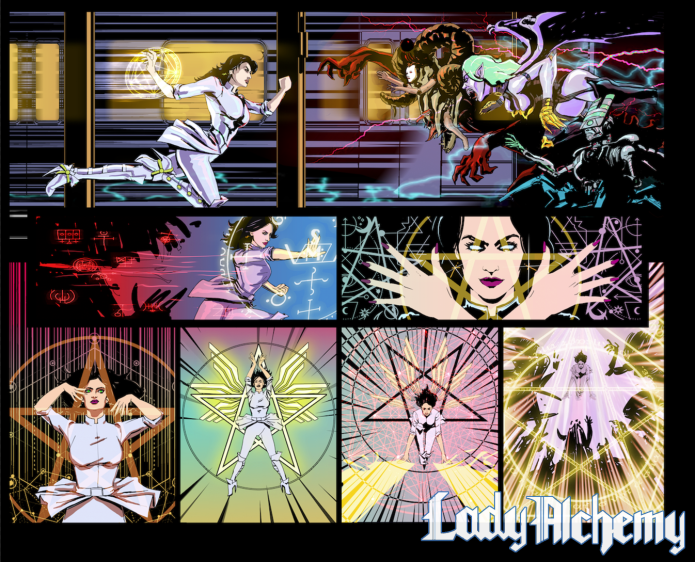 MG: Martina’s character is a sort of investigative journalist, but her secret is her deep knowledge of occult and hermetic gnosis. This  gives her an edge to see into and even infiltrate the umbral layer of the dark realm. Currently Americans are surrounded by occult imagery, most folks just don’t see it. But if one is versed in those languages they can read its coded messages. We want to unpack some of that stuff for our readers.

BIC: You’ve got stretch goals for an extra 40 pages of the graphic novel, do you already have this scripted out?

Lady Alchemy: Not fully, the story is laid out but there are a lot of details to sort through, which could always create unexpected turns once grinding through the details.

MG: The plot is pretty much laid out and key dialogue moments but the writer and I are filling in the gaps as we see how the pages pan out. We’re sort of doing this old school Marvel style where I draw awesome stuff in the realm of what were going for and he fills in the gaps.

BIC: If you don’t meet the stretch goal could this become a sequel?

Lady Alchemy: Yeah sure, we have a lot to tell and the story really never ends since it’s loosely based on my real life. There is so much going on in the world and the fight against evil never really ends.

MG: One way or another we want to tell the full story. Even after the 80 page arc is complete we have some ideas of where we want the story to go next. 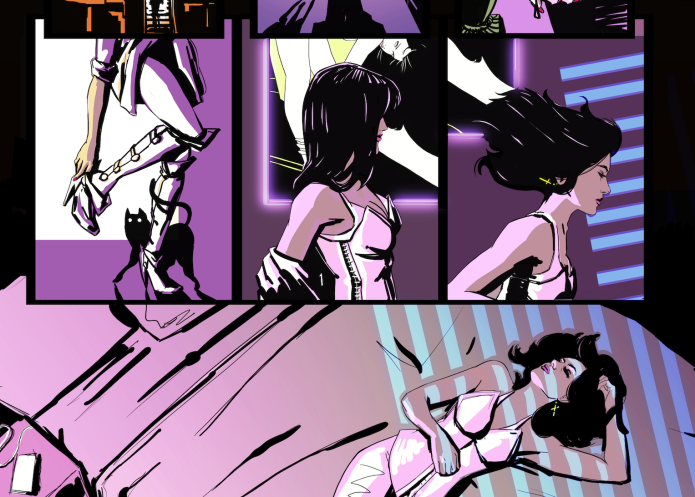 BIC: In your letter to backers, you mentioned this isn’t just a graphic novel fundraiser, but the “starting pistol for a new cultural race to the top.” How in-depth will Lady Alchemy get when examining political and social issues?

Lady Alchemy: I didn’t really want it to be obviously political, but just like the real Lady Alchemy, the art never was obviously alchemical or political. Most people thought it was just a pretty performance. Those that understood the symbolism, saw the depth and layer to what it was and appreciated that. The importance of having this layer is to keep the alchemical tradition alive in a unique way through art. The same goes for the comic book.

All I see in movies and TV and even now in comic books is some sort of agenda, and its often so obvious I can’t enjoy the art. I want to keep a fine line, where people don’t have to care about the agenda and can enjoy the story and the artwork, but those looking for some content that has a message different from the norm, something that aligns with their views can really enjoy my comic and be excited to see a story that may hit some topics in a subliminal way.

As a right winger, we always talk about the culture war and how politics is downstream from culture, so this is one way to put that into action.

MG: We want to go really deep but keep it in the realm of arts and entertainment. If you go deep enough in those areas you can find a lot of answers to social issues in the broader culture. After all people are getting their crazy ideas from somewhere.

BIC: Would you consider this project part of Comicsgate or something else entirely?

Lady Alchemy: Yes, I’ve always wanted to make a Lady Alchemy comic because I saw myself as a superhero character, performing in NYC with costumes.

I grew up in the 90’s loving sexy comic book characters like Witchblade, Fathom, Darkchylde, Gen13 and Lady Death. I wanted to become like them, and in a way, I did through Lady Alchemy.

But, just like Comicsgate artists, my cohorts found out that I did not adhere to their ideology, the burlesque and nightlife scene are extreme SJWs and feminists, and they did everything to destroy my life and career.

I was harassed and blacklisted just like Mindy Wheeler. They ganged up on me as a group to harass the theatre I worked in until they told me not to come back into work. They harassed my agent and demanded she drop me or they would refuse to work on gigs with me. They made her life generally hell for letting me work at all until she just couldn’t take it anymore and dropped me. They created campaigns and social media movements and propaganda against me, soon my reputation was worldwide in the industry and I was completely blacklisted. They would contact anyone they knew I was associated to anywhere in the country and inform them to remove me and unfriend me, they contacted all my interactions on social media to inform them I was a “bigot.”

I tried to move on and get my own, new bookings, but as soon as they would find out I’m performing, they would harass the producers or venue to have me removed. They provided my information to ANTIFA and my address was doxxed, including my hometown. They made false FBI threats,  I had nothing left.

This was my life. No one in the political scene seemed to really take it seriously because it’s just burlesque. This is why Comicsgate resonates with me. Comicsgate are the only ones that really understand this kind of attack and how it can affect you, it’s not just silly comics to people, it’s their LIFE.

Most in the political scene took it lightly because I’m just a dancer, but to ME, it ruined my whole life. I have been a dancer for 10 years and I made a name for myself and was financially comfortable, all that ended.

I also think that burlesque/vaudeville/underground theatre has completely lost sight of its original culture. It used to be controversial and edgy, but now they promote social causes and are afraid to offend anyone. This is alsp similar to Comicsgate. I just feel like I finally found a place where people understand me, and are fighting back, and it’s working.

MG: I love comics. And as I watched the industry become a joke I just moved into collecting vintage European comics. A lot of Moebius, Hugo Pratt, Attilio Micheluzzi etc.

I have been watching Comicsgate closely since about a few months before Jawbreakers launched. And I will say I think the Comicsgate guys are doing God’s work. So yes, I do consider this project under the Comicsgate umbrella.

BIC: You mentioned your production studio Magnum Opus, what can you tell us about it?

Lady Alchemy: While working as Lady Alchemy, I created a business to work under called Magnum Opus Productions where I would throw live events and book other talent. Since my business went under due to the blacklist, I’m taking this business and doing other creative things that my partner MG and I have been talking about.

MG: Martina and I have been talking about doing something like this since we first met. The problem was always funding. A comic was something I had suggested about a year ago but now with Comicsgate popping off I see no better time for us to stake a claim. 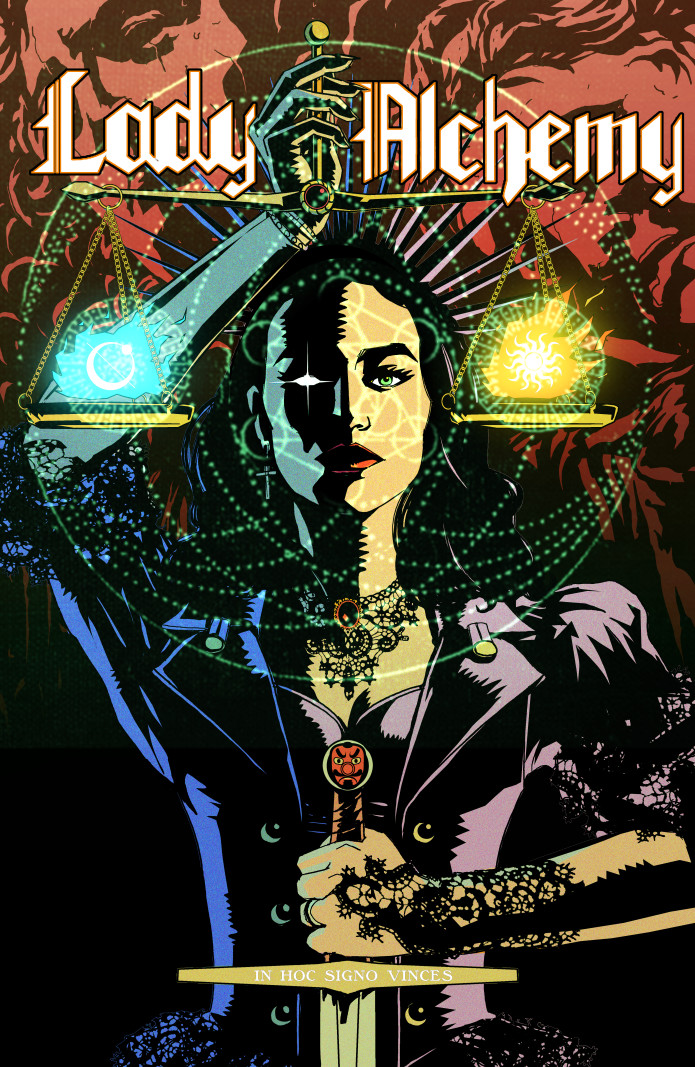 BIC: What specifically do you  hope to accomplish with Magnum Opus?

Lady Alchemy: The first endeavor is this comic book, then a magazine, helping my friend Donna Trumplova get her movie made, and also live events with performances, more videos and music. There are so many artistic endeavors and many talented people looking for a way to get platformed.

MG: The first thing I would like to do if we make it big enough is to literally put ten grand into our friend Donna Trumplova’s hands so that she can make her 80s ninja action film Tween Steam. The other thing we have already started the dialogue about is CRUSADER magazine, which I want to be a high quality quarterly magazine that showcases works from all our talented friends and will be a gorgeous item for any coffee table.