When I sat down to talk about [easyazon_link identifier=”B07FMCG84K” locale=”US” tag=”boundingintocomics-20″]Batman: Damned #1[/easyazon_link], the first thought I had was of Pee Wee Herman appearing at the MTV Video Awards in 1991 where he asks “Heard any good jokes lately?”

There’s an elephant in the room on this issue, god only knows why it matters but the universe flipped out about it so I’ll tackle it first: We can confirm that Batman is a dude. Dudes have penises and have since the dawn of time. You see an outline of it in a few shots in this issue and so what? Dicks have been around since the dawn of time and from my understanding they seem to keep to the same make and model, but since it’s the Bat-wang it matters to the internet. Truthfully, when I read this issue for the first time, I didn’t even notice. Literally until I saw seven articles online about it I didn’t pay it any mind, and neither should you because this is a very solid issue both in story and art. 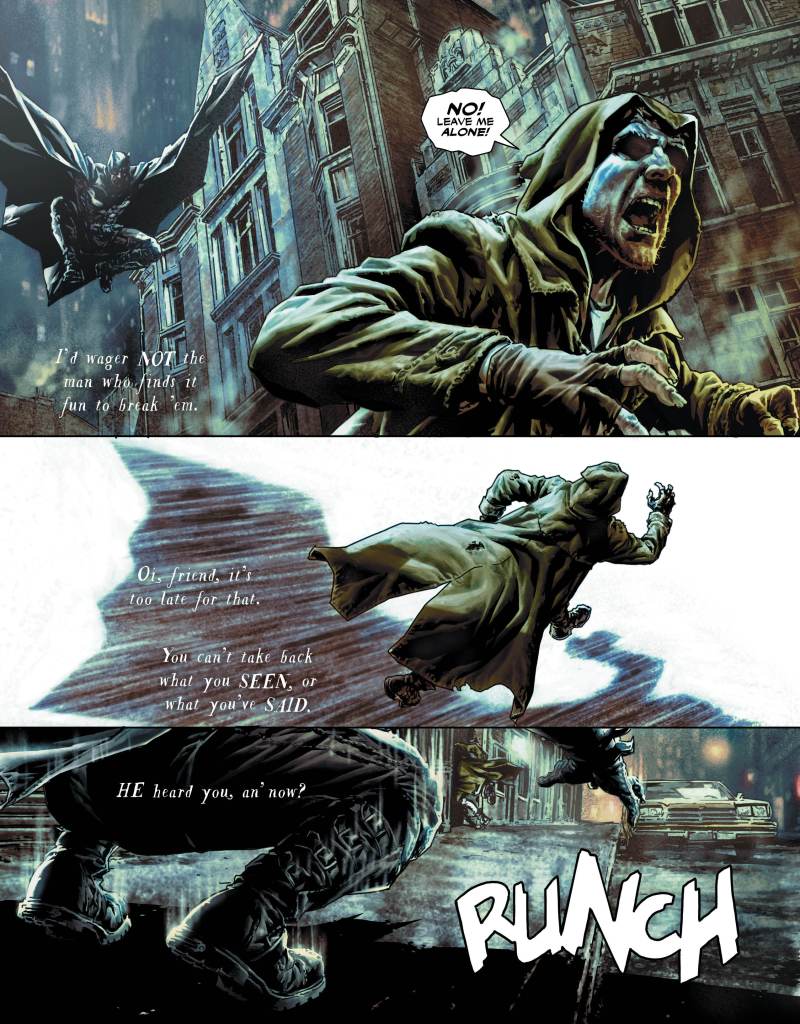 First off, if you aren’t aware, this is the start of the DC Comics Black Label line, which is an Elseworlds series set outside continuity for mature readers, and it starts off with a solid bang. This Batman seems a little more feral, as he seems to have no problem beating anyone he deems threatening to a pulp as several police officers find out the hard way right at the start of the issue.

Without giving much away, the gist of our story is that the Joker is dead. Really dead, and Batman has no idea if he killed him, and in reality, if he might be losing his grip on reality all together. Alfred isn’t around to help him for some reason, but enter John Constantine, who serves as both sidekick and narrator. As a Constantine fan, I’m always pleased to see him and all the supernatural baggage you know will follow. 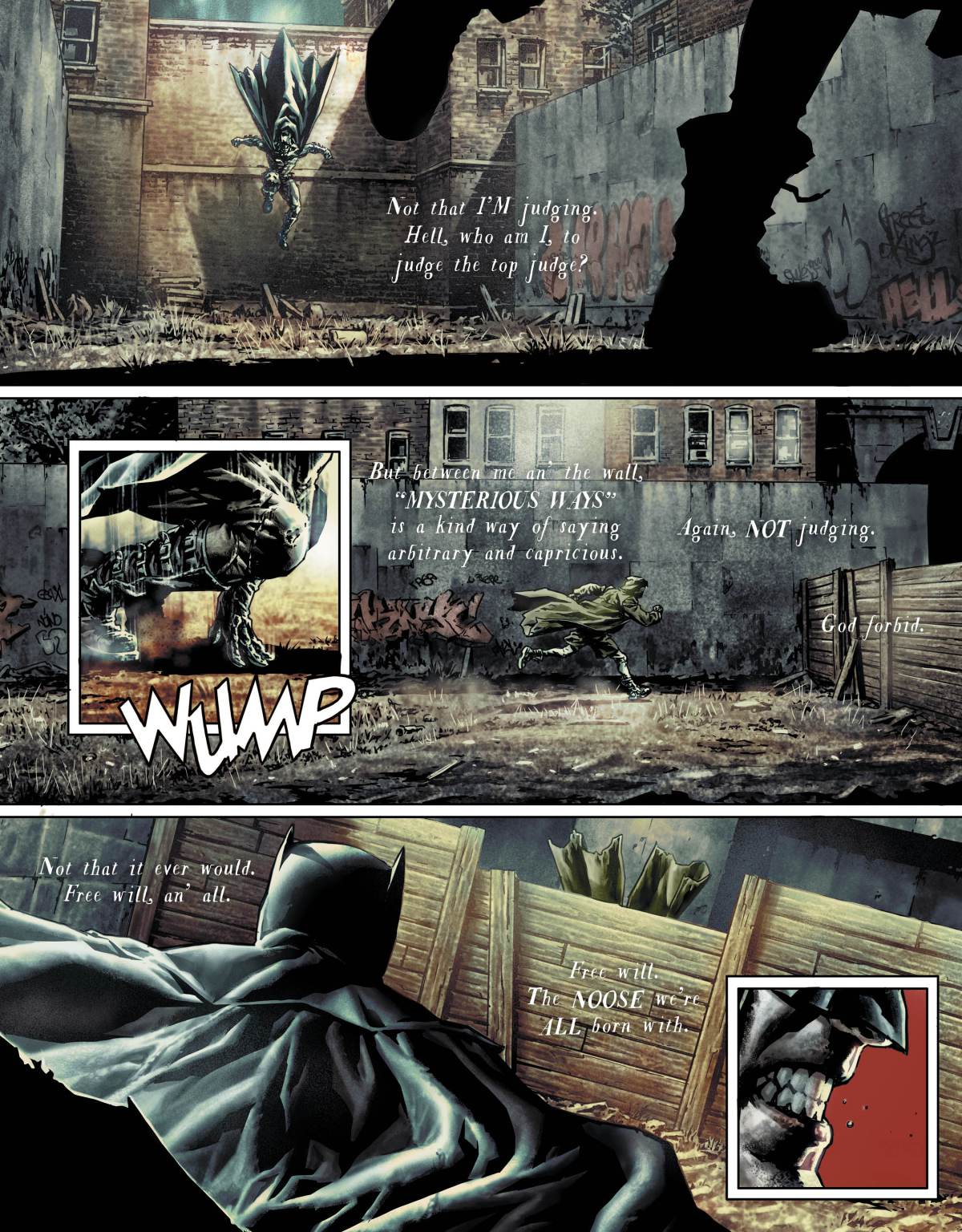 One of the fun things about Black Label (or any other Elseworlds I guess) is the way the author can take liberties with characters that normally wouldn’t fly, which Azzarello does. The issue adds/changes a few things we thought we knew about Thomas and Martha Wayne, as well as Bruce’s childhood. But my favorite addition to anyone was the one he threw at Deadman. The idea that he makes the people he possesses violently ill resonated well with me in a “that actually makes a lot of sense way.” The cameos help the story along, and all things considered the story flows really well and serves as a solid beginning for a three issue series.

Bermejo simply slays the artwork in this book. There’s no two ways about it. If you liked his work in [easyazon_link identifier=”1401215815″ locale=”US” tag=”boundingintocomics-20″]The Joker[/easyazon_link] with Azzarello, you’ll be thrilled with his work here. His people look very realistic in both body and facial expressions, and the art stays dark and moody reflecting the tone of the book in a very fitting way. One place I truly felt Bermejo shined was in his backgrounds and overall design of the city. The Gotham City of Batman: Damned looks exactly that: Damned. I was somewhat reminded of the unnamed city in which the film Seven takes place, where everything is dank and glum, almost like you’re in limbo. 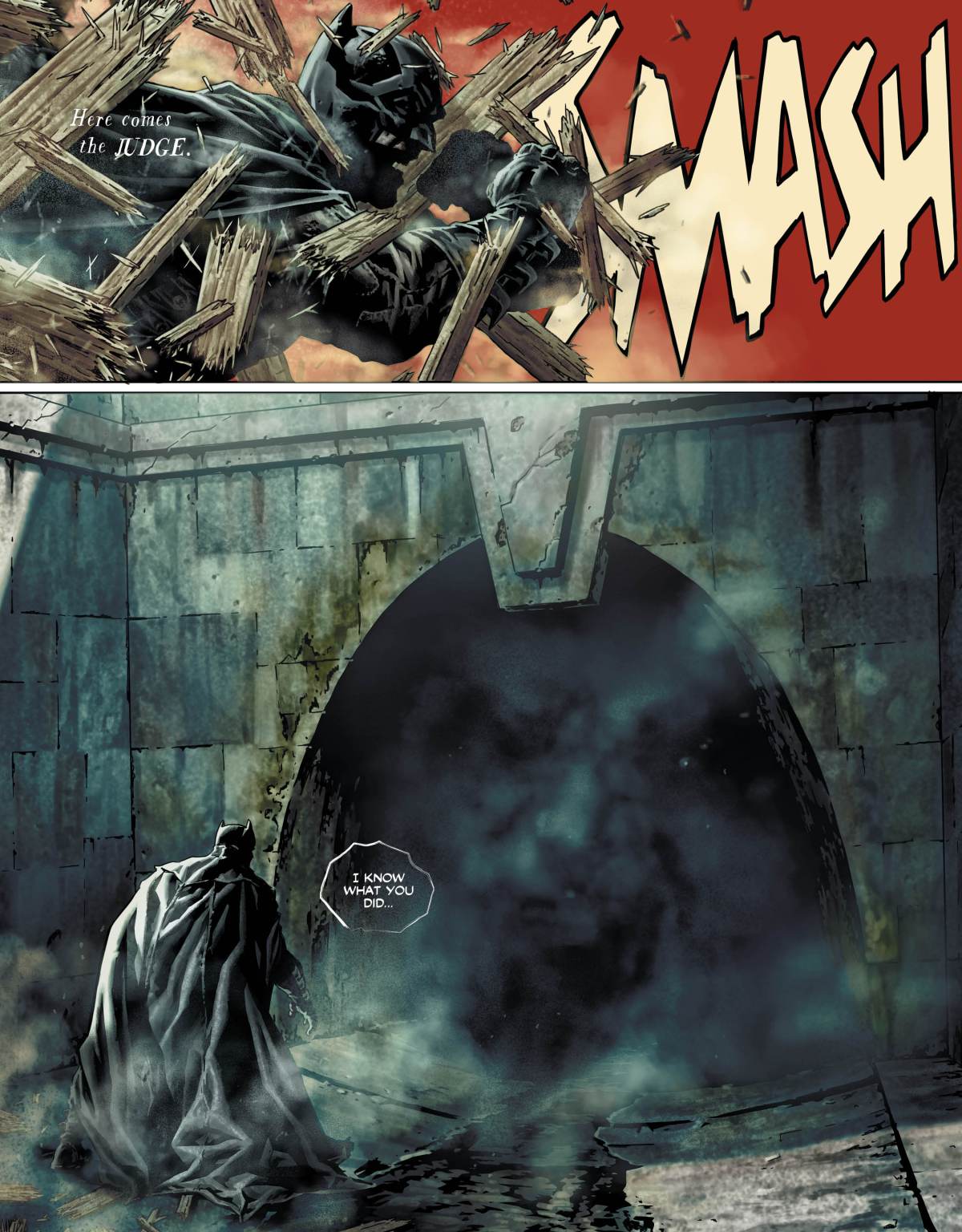 You can see that this series is set in the traditional beginning, middle, and end format. [easyazon_link identifier=”B07H9DSZHL” locale=”US” tag=”boundingintocomics-20″]Batman: Damned[/easyazon_link] starts it off well, making me wish it were monthly. The one thing I was less than hot on was the magazine sized format, because when I saw that it was prestige format I thought it meant the old prestige. Still it’s a beautiful book and well worth the price. If this is what Black Label will be offering, I think it’ll put up solid numbers in sales, and breathe a little life into some comics that might need it.