“Is the mean-joke man with the stomach hole coming back?”

There is something to be said about embracing continuity as opposed to ignoring it- then just doing your own thing. When properly utilized, continuity validates the actions and responses of characters. No one wants to stifle the creative process of a writer. I’d imagine its discouraging to be expected to churn out x-number of stories, yet at the same time be told what you can and can’t do. However, when writing within a universe with more than 60 years of history, it comes with the territory. You can either overload your readers and make them shy away, or you use it to enrich the content. A prime example of doing this the right way can be observed with continuity-junky, Kelly Thompson, in her third issue of Marvel’s [easyazon_link identifier=”B07DTVJWHM” locale=”US” tag=”boundingintocomics-20″]Mr. and Mrs. X[/easyazon_link]. 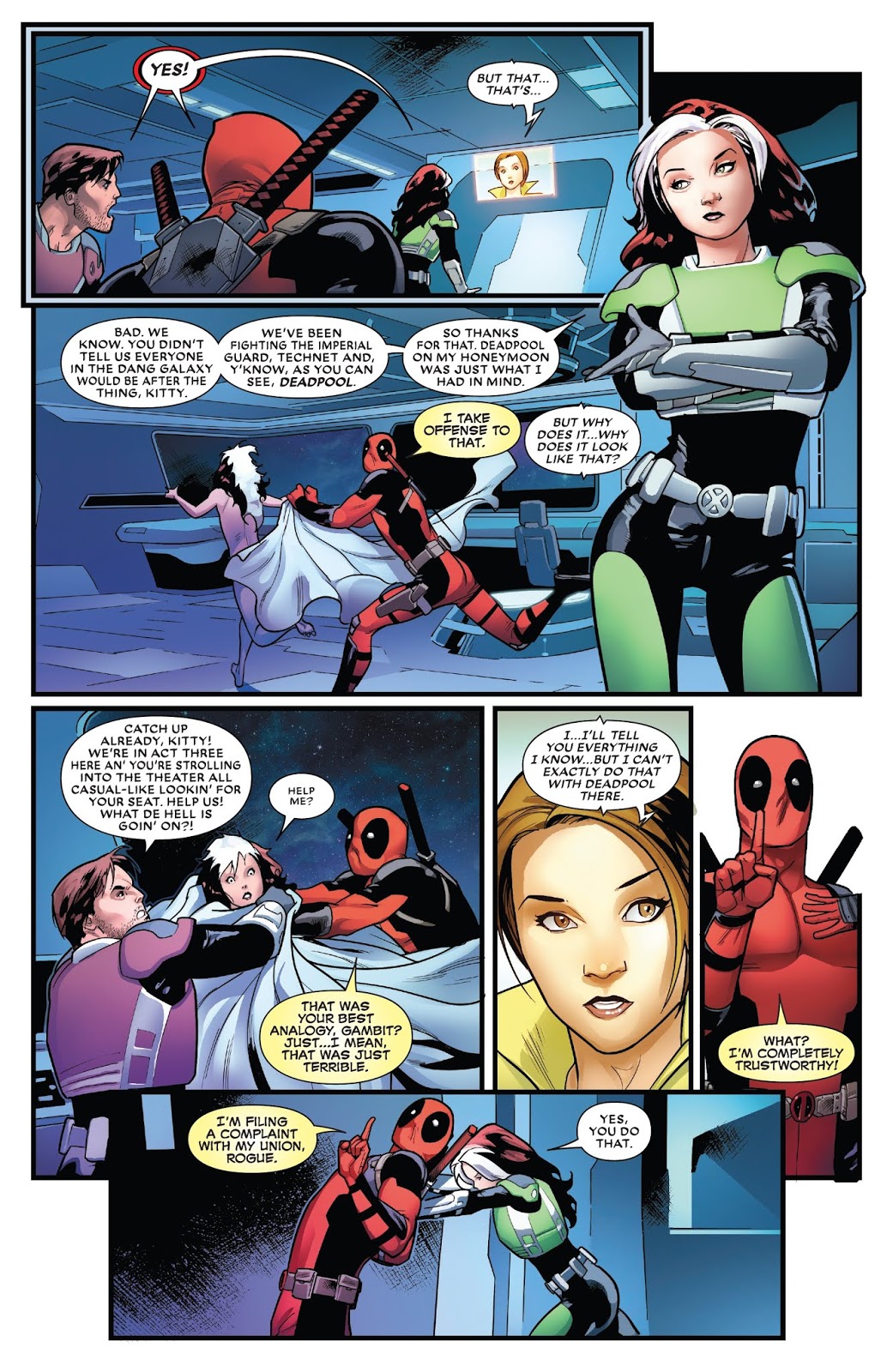 At the end of the last issue the egg- Rogue, Gambit, and honeymoon-crashed, Deadpool fought over (rather hilariously)- hatched and turned into, oddly enough, a clone of Rogue. After telepathically downloading some much needed updated information, the egg adjusted her appearance, albeit just before their ship is attacked by Deathbird’s rebel-force controlled ships. This encounter kicks off what is undoubtedly the book’s best sequence. Artist, Oscar Bazaldua, stretches out his considerable talents and turned what could have been a dull exchange between Gambit and the Merc into four action-packed panels of mayhem. 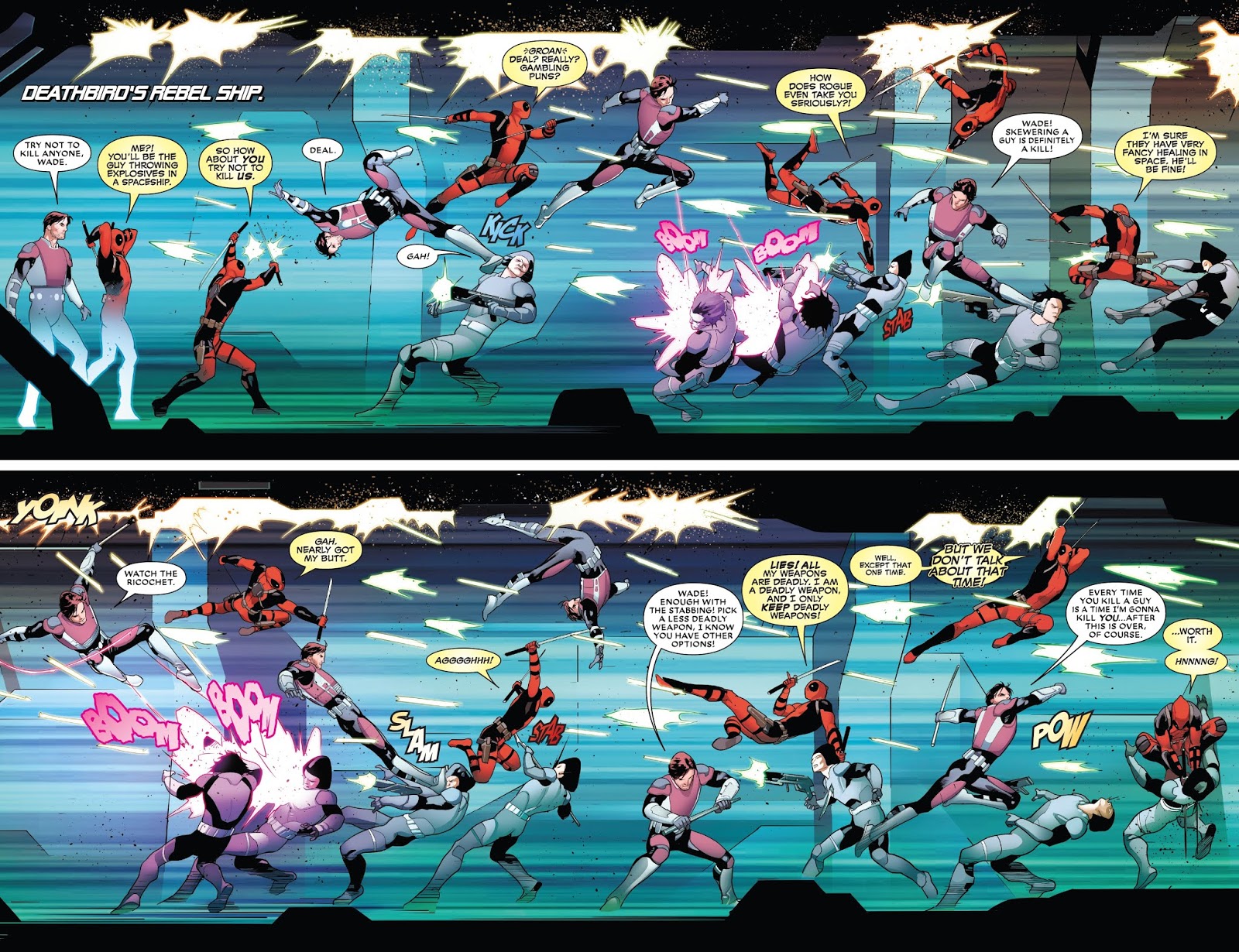 As a self-proclaimed Gambit superfan, I was delighted to see the Cajun get so much shine. It’s been a long time since he’s demonstrated this level of fighting prowess (without being mind-controlled), confidence, and during his dealings with Deathbird, diplomacy. Quite often Gambit tends to takes the backseat to his bride, or for that matter, anyone else that happens to be around. So this was refreshing and brought a real smile to my face. His supporting cast doesn’t disappoint either. Rogue, as usual, is sexy, headstrong, and funny. Deadpool is… well, he’s Deadpool. 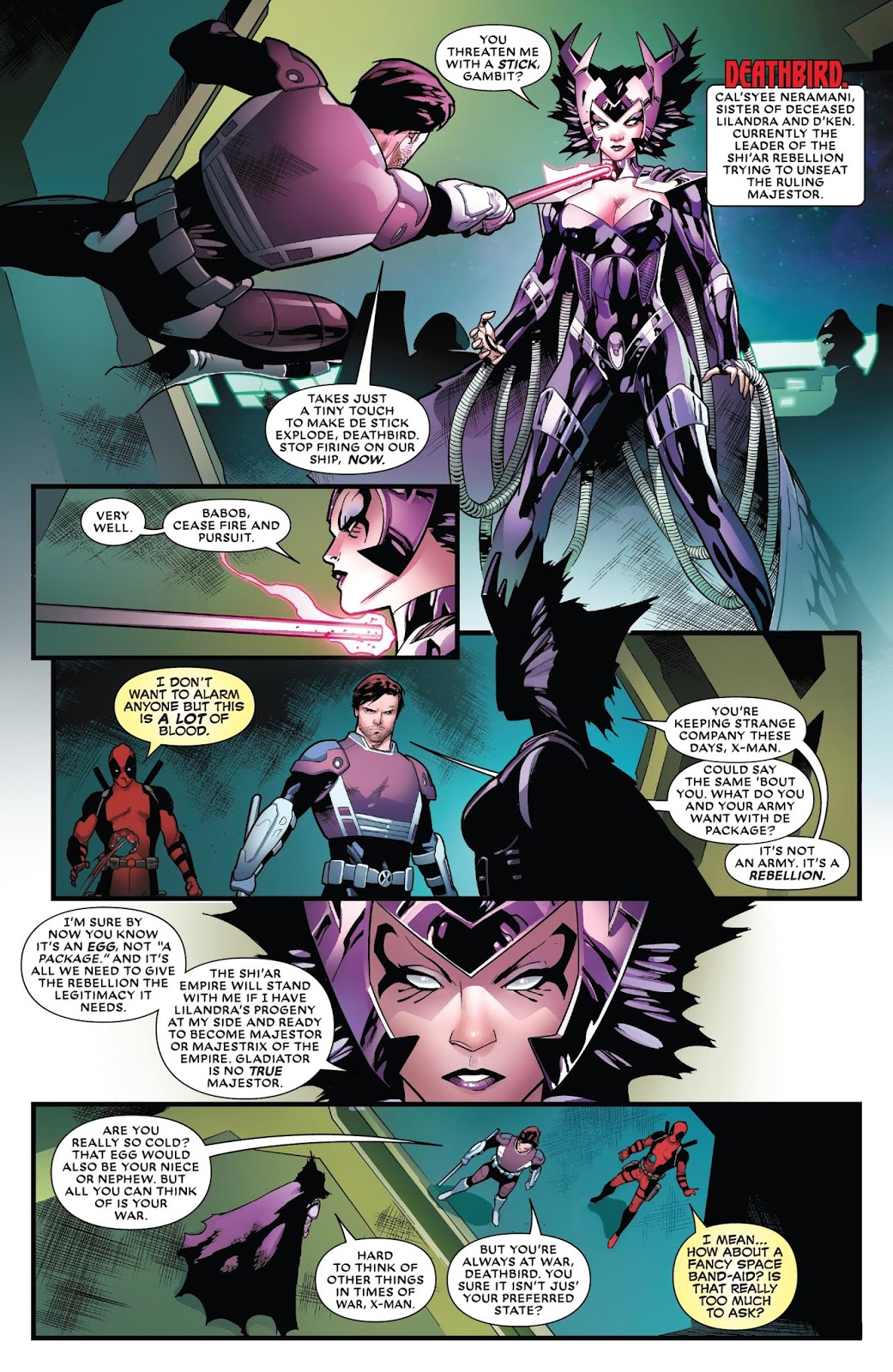 If you’re not already reading the Rogue/Gambit duo-book, my friends, you’re missing out. In my humble opinion, by far the series (only three issues in), has proven to be the strongest written and purely entertaining X-Men franchise book. From the first page to the last, there isn’t a wasted panel. While the [easyazon_link identifier=”B07DTVJWHM” locale=”US” tag=”boundingintocomics-20″]third part of Love and Marriage[/easyazon_link] ends with the couple in a familiar predicament, it doesn’t dampen the anticipation for the next issue. High marks across the board. Read. This. Book.