After Telltale Games announced massive layoffs, a number of people in the gaming industry came together to try and help the newly unemployed developers find work. However, there were also some who this as an opportunity to address what they feel is a major problem in the industry.

Jennifer Scheurle, who describes herself as a “multi-award winning, world travelling Game Designer and public speaker who has worked on 8+ released titles since she started in working in the industry 6 years ago,” took to Twitter to post a lengthy thread about how games companies should “stop favouring angry gamers over their own employees.”

I started this thread differently, but changed my mind because I’m angry.

I want our games companies to stop favouring angry gamers over their own employees, over our health, over our well-being and over our jobs.

Not demanding better of your communities is patronizing! Thread:

First off, Scheurle focuses on the idea that gaming companies are favoring an angry player base over their employees. She specifically points to “angry gamers.” However, is this really true? Just in the past few months we’ve seen Battlefield V developers tell their customers not to buy the game. That was followed up by Creative Assembly’s Total War: Rome II’s community editor doing almost the exact same thing. While Total War: Rome II is a little more isolated from consumer dissatisfaction given the game was released back in 2013, just after EA insulted their customers, a report came out showing Battlefield V was lagging in pre-order sales.

It’s quite possible that game developers might want to listen to their “angry gamers” and understand what they exactly want out of a game. In fact, if they did more listening to their “angry gamers,” I would bet their sales would increase and thus they could better take care of their employees. 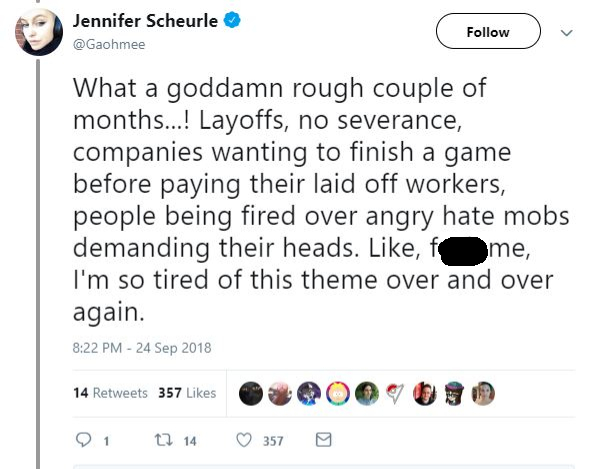 In the midsection of the tweet, she against lambastes the “angry hate mob.” The only time I can really remember a large group of gamers gathering together to push back against an employee is when the employee launched a preemptive strike against gamers. We saw this unfortunate truth play out right before our eyes when Guild Wars 2 writer Jessica Price and fellow writer Peter Fries were fired by ArenaNet, the company behind Guild Wars 2. Price launched into a vicious expletive filled rant against a popular Guild Wars 2 YouTuber.

ArenaNet took the actions you’d expect ANY company to take when someone berates a costumer. As someone who has worked both in the private sector and nonprofit sector, this isn’t something new. 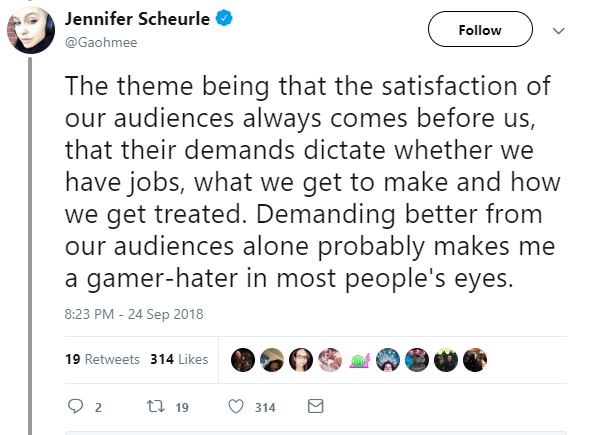 Customer satisfaction is a critical piece of any business. If your customers aren’t happy then you cannot really expect that they will part with their wages to buy your products. If someone is disrespecting you and insulting you, will you go out and buy a product from that person?

But this is where things take a concerning turn. In the next two Tweets, Jennifer mentions a conversation she has a with a friend who works in the education field. How she sees gamers and compares them is troubling and might offer an insight into how and why certain employees seem to have a contempt for their customers.

Let me tell you this: Demanding more from the people we create for, from the communities we work for and with is an act of care and love.

Here’s why: I spoke to a dear friend of mine the other day who works far away from games in education.

She works with marginalised kids a lot and one of the key principles she follows is to “demand the best of them”. She explained to me that it is part of discrimination and oppression to expect less from people who are less fortunate or who we don’t care about.

Yes, you read that correctly. She compared her audience and customers to children who you have to “demand the best of them.” So developers have to treat their consumer base as if they are some sort of group of children to be talked down to, be taught how to behave. This would explain the almost scripted like level of the use of terms such as “manbabies” seen by not only people in the gaming industry, but popularized by [easyazon_link identifier=”B077T5KRWK” locale=”US” tag=”boundingintocomics-20″]Star Wars: The Last Jedi[/easyazon_link] director Rian Johnson.

But she goes on:

And I thought that line of thinking was brilliant and wonderful because everything I’ve ever felt about large companies caving towards hate mobs and their demands was that it is one thing apart from cruel: It is patronizing.

So gamers who expect game developers to not treat them like garbage, as well as expect a solid game and story, not force-fed leftist sociological garbage is now considered “caving towards hate mobs.” I don’t think Scheurle understands the basics of how the current economic system works. If you don’t cater towards your players, they aren’t going to buy your product and keep you in business.

In the following Tweets, she attempts to salvage her patronizing view of customers as children into describing at as “an act of love and care.”

If we believe in our communities, if we think that the people we create for are worth our time and effort, it is an act of love and care to ask them to be better and expect nothing but the best of them.

Again: Expecting the best of people is an act of care!

Having a clear direction, setting boundaries, clear communication, telling our communities what we expect of them and our treatment of us and how we will reciprocate good relationships with them – THAT is an act of love and care!

However, she then goes to demand that game development companies no longer listen to the demands of their playerbase and paying customers. This might be the dumbest thing I have ever read. But it is good advice for companies who want to go out of business.

So: No more caving towards demands from our players. Listen, but don’t feed hatred. Good leadership means telling people what you need from them and why, including your employees. We need leaders to be clear, strong and most of all: kind.

In closing, she sets off to describe the industry as “busting with incredible creative talent” but attacks it for not having the right type of leadership that can weather the storm of so-called gamer outrage.

This industry is bursting with incredible creative talent – and it lacks leadership at every corner. It hurts my heart and everybody deserves so much better. The people laid off, the people fired, the marginalised groups and yes, players also.

The thing is almost every example that is being complained about when it comes to the closure of studios has to do with mismanagement and poor sales. If you have any combination of the two, anyone with business sense will tell you that the company is in trouble. What is concerning though is the fact that this developer decided to use the fall of Telltale Games to push out her own agenda so that the treatment of gamers are at best an afterthought.

This oozes a level of elitism, privilege, and tone deafness that is astronomical.

What do you think of what Jennifer Scheurle has to say? Are there any good points within it? Is she right? Or has she completely missed the point in all of this?