A number of comic book creators began to demonize the Republican Party following the events of the Brett Kavanaugh hearings on Thursday. Gerry Conway, John Layman, Phil Jimenez, and Rob Sheridan got in on the act in one way or another.

Gerry Conway, who co-created The Punisher and wrote the death of Gwen Stacy during his run on The Amazing Spider-Man described the Republican Party as “the face of angry white male privilege.”

Once again we have seen the face of angry white male privilege in America and it is fully the face of the Republican Party.

Phil Jimenez, who has done work on Wonder Woman, Infinite Crisis, New X-Men, and The Invisibles, took it a step further and echoed the sentiments of fellow creator Ron Marz in calling for incivility. Jimenez advocated for harassment of Republicans stating, “We should literally be doing this to them in every corner and every elevator we find them trying to hide in. Always, every day.”

We should literally be doing this to them in every corner and every elevator we find them trying to hide in. Always, every day. https://t.co/tbEgQ6rihH

Vertigo Comics writer Rob Sheridan, who previously called Trump supporters “racist psychopaths,” tried to one up himself by describing members of the Senate Judiciary Committee as “scum. F****** scum.” 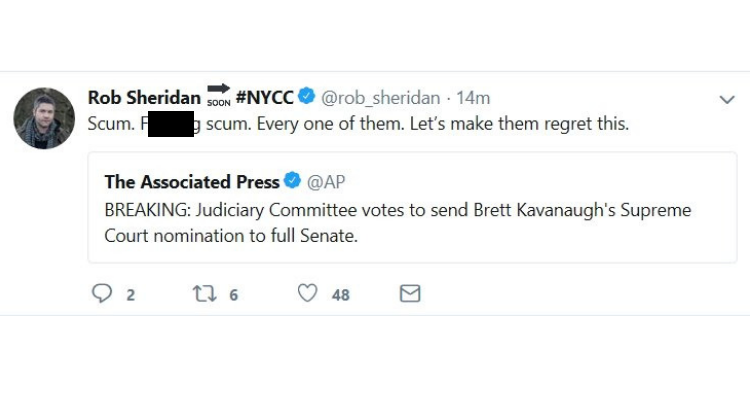 The comic book creators wouldn’t be alone. CBR and Polygon writer Kieran Shiach would also echo Jimenez’s call for harassment. This should come as no surprise given he’s made it clear he also wants to execute people via guillotine.

I don’t ever want to hear a single polite liberal condemn confronting conservatives in public ever again.

Every day we’re confronted with them getting away with heinous, despicable shit; if I see them in the street the least I can do is call them a wanker.

It’s really no surprise why the comic book industry is struggling mightily the past couple years. People are abandoning it in droves because they’ve seen behind the curtain, and they don’t like the nasty, disgusting vitriol one bit.