Former She-Ra voice actress Melendy Britt, who gave voice to She-Ra, Princess Adora, and  Catra between 1985 and 1987, took to Facebook to defend fans of the classic series.

Britt wrote a lengthy defense of old school fans after an article on Movie Viral called out a number of websites like Nerdist that are decrying fan criticism of the show.

“I know I may be taking a chance posting and commenting on this, but my heart has been hurting about the comments some marketing people and publicity machines are bombarding the internet with regarding some fans of the original She Ra series.

I’m actually glad that in this published article someone finally has said “enough” to the kind of devisive (sp) marketing and negative publicity that has been promoted regarding the fact that some people might actually prefer the original series. It’s a big world, and there’s enough room for many cartoons. But, because the She Ra name is being used to do a “new” series, I believe you must respect the admiration of fans of the original, and not because you have the power of marketing or an ego trip put them into categories that denigrate their character and insinuate that if they prefer the original, something is wrong with them. In meeting thousands of fans, I’ve NEVER come across any person who did not have a great heart and genuine love for the integrity and pure intention of the original series. It changed their lives for the better. It gave them comfort, laughter and joy with a moral view that is exceptional 33 years later. I love each and every one of you…JMHO #thankyou #original #sheraprincessofpower #shera #yourejustfine#forthehonorofgrayskull #mastersoftheuniverse #cheatersneverwin#ilovesherafans #respectoneanother #iamshera #watchoutforpublicityspin#divisivenetworkmarketing #lovewillprevail”

And websites like Nerdist have targeted fans who were unimpressed with first look at the new She-Ra as well as the new trailer.

In fact, Nerdist would concur with comic book artist Jamal Igle and tell fans to rethink their lives if they didn’t like the new She-Ra designs. Nerdist’s Jessica Chabot would even say, “if you didn’t get goosebumps watching [the first trailer], you might be dead inside.”

She would then falsely declare that the trailer “has gotten near unanimous praise from fans.”

While Britt took to the defense of fans back in September, it appears DreamWorks TV or at the very least someone associated with the show has decided to censor people who are being critical of the show. 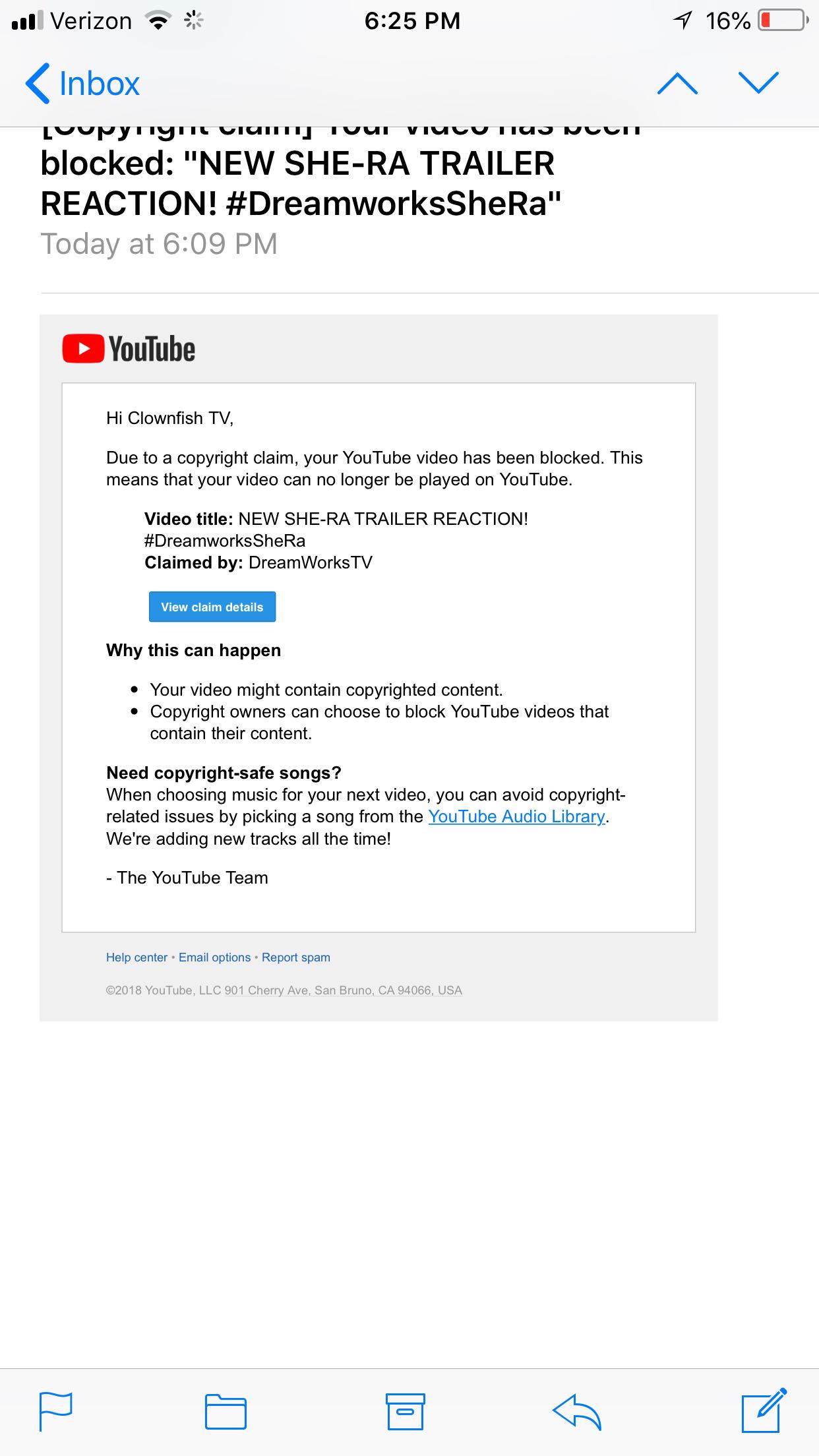 We spoke with Kneon, one half of Clownfish TV, about why he believes his video was censored.

“Our video points out that the original She-Ra actress wasn’t happy with DreamWorks handling of the fans, which might have been an issue. Or that we have stalkers on our channel now. Or that our livestream had 400 people watching and the official She-Ra livestream earlier today only had 50. Could totally be a zealous fan. Or complete coincidence.  Who knows?”

Clownfish TV would provide further speculation in their own video:

While Clownfish TV’s live-reaction video was taken down, other YouTubers, who gave the trailer a positive reaction, have not seen their videos reaction videos removed.

What do you think of Melendy Britt’s defense of old school She-Ra fans? Do you think DreamWorks TV or Netflix is actively censoring negative reactions to the new She-Ra?