Crime. Sleaze. Corruption. Noir. As only Brubaker and Phillips can Deliver

It’s been a while since we’ve been invited to step into the world of Criminal. The last full story arc, “[easyazon_link identifier=”B015XAZ9SO” locale=”US” tag=”boundingintocomics-20″]The Last of the Innocent[/easyazon_link],” wrapped up in 2011. The last entry into the series we had was 2016’s 10th Anniversary Special. So it was truly a treat to come back into this world that the creative team of Ed Brubaker and Sean Phillips first started in 2006. I was expecting big things, and for the most part, they delivered.

After 16-year-old Ricky Lawless beats an elderly, Alzheimer’s-stricken man named Mack “the Monster” and robs him of a prized necklace, he uses the money he fences to bail his father, Teeg Lawless, out of prison. All good so far, just one problem – Mack was a close personal friend to the late father of Sebastian Hyde, kingpin of the local mob. Hyde takes it kind of personally. Now, Teeg has two weeks to get the $5,000 Ricky fenced (plus another $20K for “the old man’s suffering”) back to Mack, or Ricky’s dead.

Ed Brubaker has always been at his best when he’s writing the sleazy, down-to-earth lawbreakers that make up the world of Criminal. His dialogue is simple and direct. He channels the very best of what made the old crime noir writers so endearing but offers his own modern sense of things. He’s essentially Raymond Chandler by way of Elmore Leonard for comics. 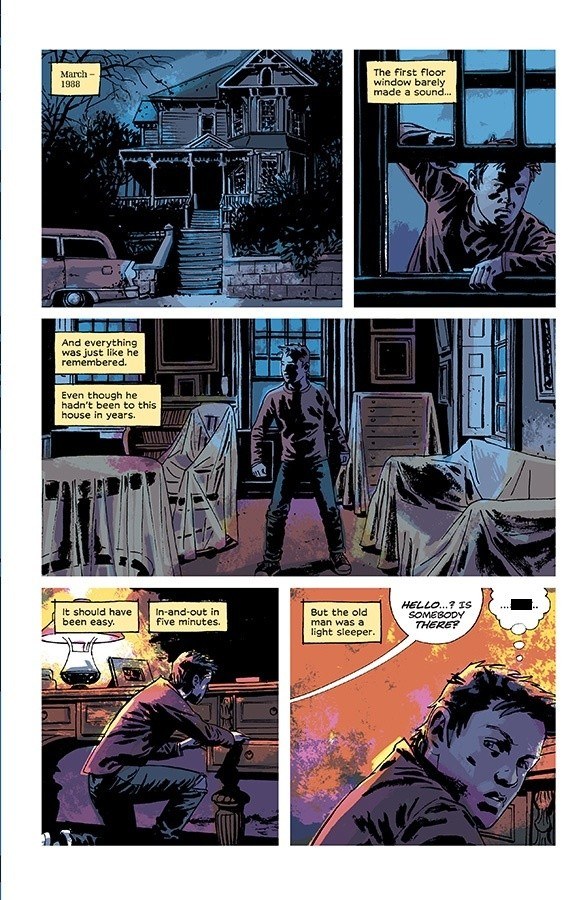 One of the most appealing aspects of this and past Criminal story arcs is that it’s so accommodating for both newcomers and returning readers alike. Fans of the series will recognize the names Teeg Lawless and Sebastian Hyde, but you don’t have to have read a single issue of Criminal before to quickly figure out what’s going on. It’s a good balance between new and old.

Brubaker is, by far, one of the best dialogue writers in comics. There’s a tendency by many writers to make comic book characters talk like actors in a soap opera. Brubaker’s characters sound like real, breathing people, each of whom has their own agenda, worldview, and secrets to keep. The prose in Criminal #1, while not as sharp and memorable as some of his past work, is direct and to-the-point. It captures the noir spirit well without devolving into stereotypes.

The only real detractors are that the setup is fairly generic, and it can take a while to know exactly who the story is going to be about. The first quarter of the book focuses on Ricky as he listens to Mack recount how he got the necklace and steals it for himself. Within the span of four pages, Ricky’s out of the picture, and we’re keeping tabs on Teeg for the rest of the book. It can be a little jarring, but at nearly 40 pages worth of story to get adjusted, it’s not a big problem. 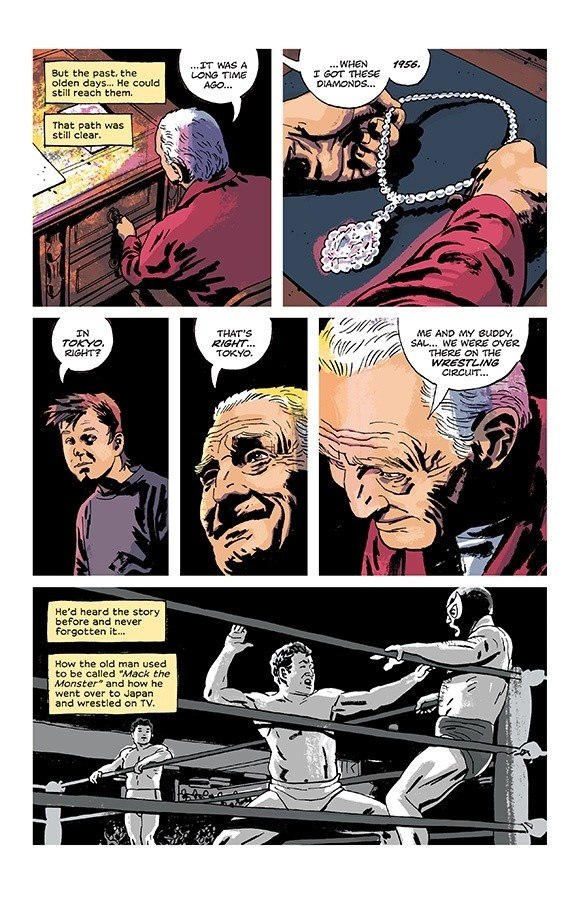 For anyone who’s seen Sean Phillips’ work on Hellblazer and any of his other collaborations with Brubaker, you know he likes to keep a minimal look, use a lot of black, and put just enough lines that you know what’s going on. It’s this minimalist, 1940’s-era style that gives so much of his art its power.

Phillips’ style is naturally noir and it suits Criminal perfectly. The deep blacks and simply drawn characters and backgrounds make it feel like you’re watching one of the classic works of noir’s heyday. He’s particularly good at communicating just enough information that you can tell a glass is a glass, a couch is a couch, and a gun is a gun, without cluttering the page. 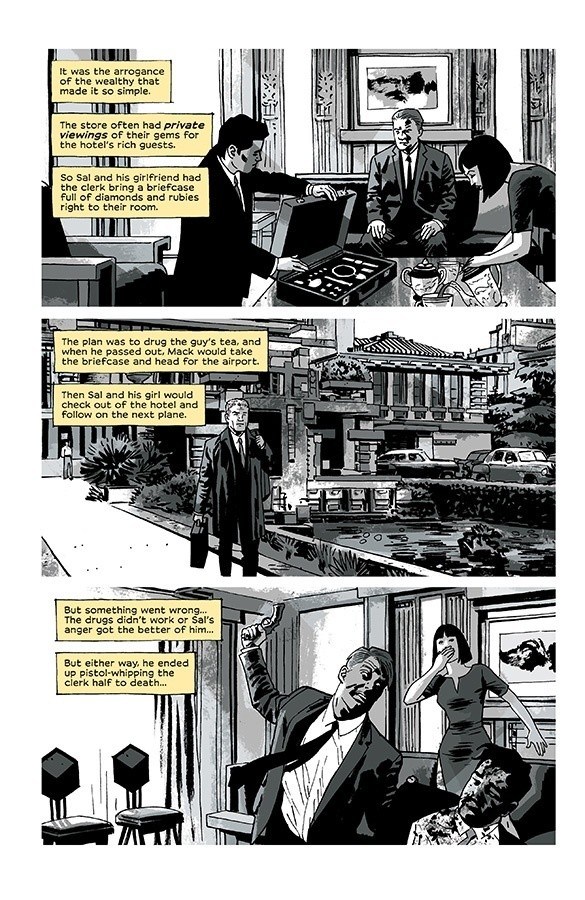 Even though his style is somewhat simple, he’s a master at rendering characters in such a way that you can instantly tell who’s who, even in a crowd. None of these characters look or feel like superheroes, and they’re not meant to. These are Joe Average, man-on-the-street types who seek easy riches and get rewarded with gunshot wounds. With Phillips’ on pencil and ink duty, even the most common criminal can become a compelling study of life on the street.

The colors, provided by the talented Jacob Phillips, add a nice accent to Phillips’ inks without overwhelming them. There’s a nice wash feel to them that communicates the vintage feel that Phillips is known for. 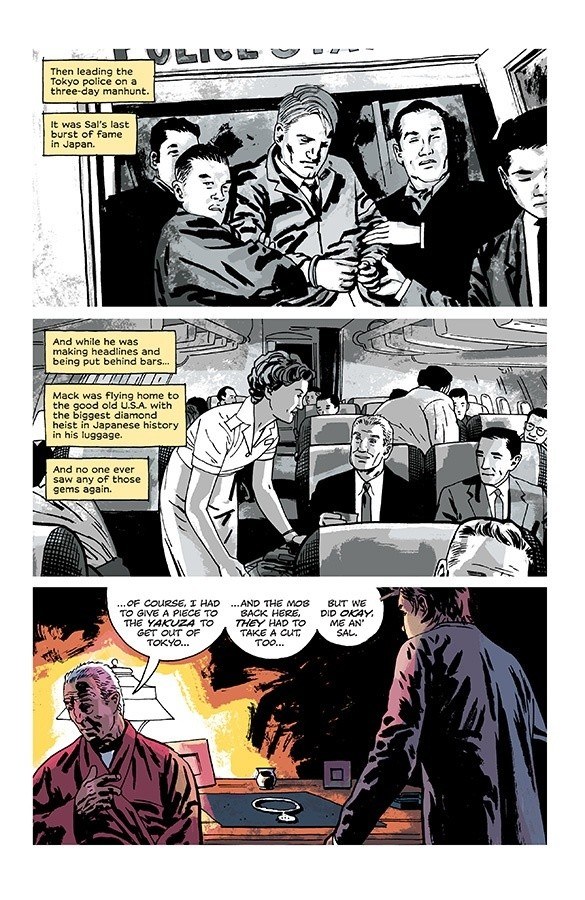 If there’s anything negative to say about Phillips, it’s that he sticks to what he knows. You’re not going to find him trying any crazy camera angles or flashy splash pages here. His art serves the story, and serves it well, but nothing more. There’s not a single page in Criminal #1 that I’d like to hang up on my wall.

Priced at $3.99 for close to 40 pages of story, plus eight bonus pages of backstory and exposition by Brubaker in the back, Criminal #1 is a strong start to what I hope will be a great new entry in the Criminal mythos, and definitely worth buying. I’m very optimistic about whatever Brubaker and Phillips have planned for their next foray into one of the best crime comic series of the 21st century. I expect big things. If I know those two, they won’t let me down.