Wherein the world looks a little brighter and happier again even though we have a questionable choice for a first issue bad guy and a colorist ruining the dance party.

[easyazon_link identifier=”B07J5RGZGJ” locale=”US” tag=”boundingintocomics-20″]Captain Marvel #1[/easyazon_link] has a lot going for it, despite some serious shortcomings. Comparatively speaking, this issue is phenomenal. It’s far better than anything that’s been done with this title in the last few years. If you take that comparison away though, it’s just a mediocre comic that works as a serviceable start. It has some problems, but it has heart and it has a writer who obviously loves the character.

Writer Kelly Thompson has a tendency to take a few issues to hit her stride and this series looks like it will probably follow suit. Thompson does a great job with the first half of the story. She picks you up right in the middle of the action as a giant Kaiju is kicking the crap out of Spider-Woman and downtown Manhattan, not necessarily in that order. Spider-Woman and Captain Marvel are long established besties and Thompson lays down some excellent witty banter while they take care of business. The best part of this opening scene is Thompson’s attention to detail. Thompson writes Spider-Woman just how Bendis wrote her and her voice is distinctly different from Captain Marvel’s. The Kaiju isn’t really a big threat to Captain Marvel, but Spider-Woman is outmatched, and Thompson has fun with this to the point that they even do a variation on “Let me hold him for you while you get your licks in.” The part I’ve been waiting for though comes towards the end of the fight where the Kaiju grabs a little kid and swallows it whole. Captain Marvel follows the child into the monster’s open maw without hesitation and completes the rescue while at the same time ending the threat. It’s a heroic act that we haven’t seen from Carol Danvers in quite some time. 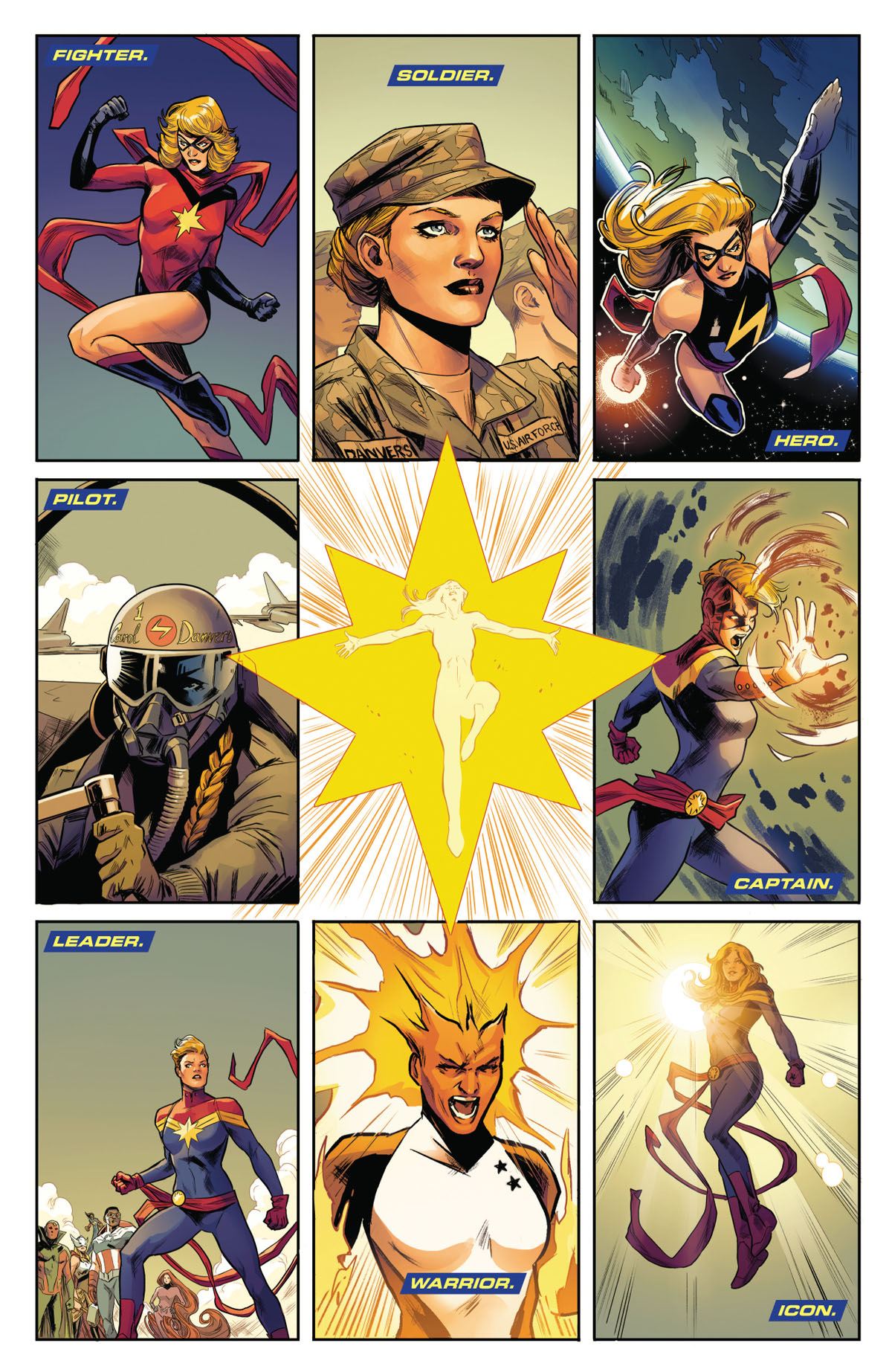 The middle part of the story is an obligatory run-in with Iron Man where both Captain Marvel and Spider-Woman snark about him while he manipulates Carol into taking on an apprentice. Considering the history of bad blood between these three characters, I think this is Thompson’s way of achieving a middle ground. I’m also going to forgive the awkwardly written scenes between Carol and Rhodey which pretty much amount to, “Oh hi you’re alive.” “Oh yeah, um sorry I didn’t call but you were like up in Maine getting your mom killed or whatever.” “Naah it’s cool, wanna grab a coffee?” “Sure.” because either Thompson doesn’t want to bog the story down with this or there’s a storm coming.

Carmen Carnero does a solid job on the art. Her pencils are tight, the characters are expressive and she makes it easy to tell who’s who. She’s solid at backgrounds and dynamic poses, but her work here seems rushed, especially the inks. There’s a distinct lack of light, shadow and depth to this issue that makes me think she would have benefited greatly from a solid inker that wasn’t herself. Someone like Paul Mounts would have really complemented Carnero’s line work and potentially would have made the horrible coloring less noticeable. (More on that in a bit.)

I’m not sure I would have gone with a 3rd tier Fantastic Four villain as the big bad for the first arc of a premiere restart with a multi million dollar movie on the horizon but, considering the crap Marvel usually pulls, that’s sort of tame. I mean, I get the temptation, I do. It must have seemed like a great idea to put Marvel’s premiere feminist icon up against Mahkizmo The Nuclear Man, a hyperbolic blowhard who acts like a Miller Light version of one of John Norman’s Slavers of Gor, but in practice nobody but a few die hard Fantastic Four fans and a few leftover peeps who loved John Byrne’s She Hulk have ever even heard of this guy, let alone care at all about him. Gerry Conway originally created Mahkizmo as a counterpoint to long time Fantastic Four ally Thundra’s hyper femininity, and taken in juxtaposition to Thundra’s all female slaver universe it’s merely a dumb idea. Taken out of that context as everyone else who’s tried to use that character has done in the few times it’s been tried, Mahkizmo comes across as cartoonish and just silly. So, good luck with this one Kelly Thompson I don’t see this being one of your better story arcs, and if you’re trying to shoehorn in some dumb manifesto about how all men are horrible evil pigs and the wahmins will always prevail over their evil tyranny in the end, we get it, you’re woke, but you are a far better storyteller than that. 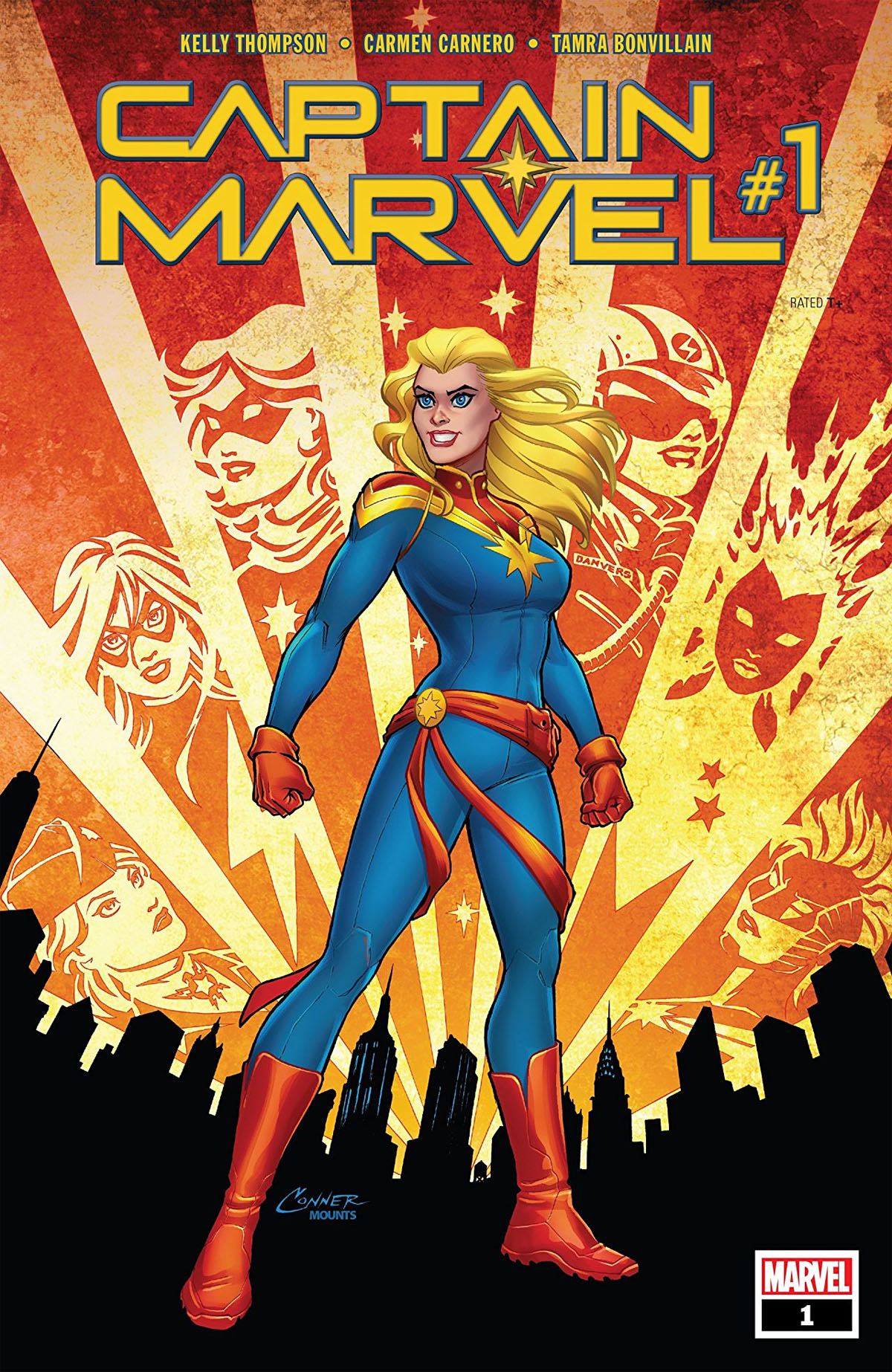 What the holy hell is up with this cover. I had to really stretch the far boundaries of my sanity to reach the ultimate conclusion that this was in fact an Amanda Conner cover. This is the same Amanda Conner who usually adds beauty, class, style, an unerring sense of design and a wicked sense of humor to every comic book cover she does. This cover looks like something out of a Minecraft nightmare with a central figure that seems to be an evil zombie version of Captain Marvel built out of regular geometric blocks and spite. Where did this cover even come from, Marvel? I’ve seen Amanda Conner whip out con sketches while fighting no sleep and a brutal hangover that were better than this. But even after all that, the cover is not the worst part of Captain Marvel #1.

That honor goes to Tamara Bonvillian who messes up the coloring of this issue so badly that it’s a testament to the strength of Carmen Carnero’s art that this issue is even readable. Her choice of soft pastels for the color palette of a superhero book is simply ludicrous, but it’s what she does with them that really messes up the art. Take a look at the double page spread of the Kaiju monster, and tell me the coloring doesn’t turn what would be otherwise stellar artwork into a sad mass of pastel mud. The colors on every page range from completely off-putting to merely distracting. A great colorist should be completely invisible to the reader. The colors should enhance the story almost subliminally without jumping you out of it. Bonvillian knows this. She’s a graduate of the Kubert School and she bloody well knows better. They teach that there, hell they teach that in high-school art class. 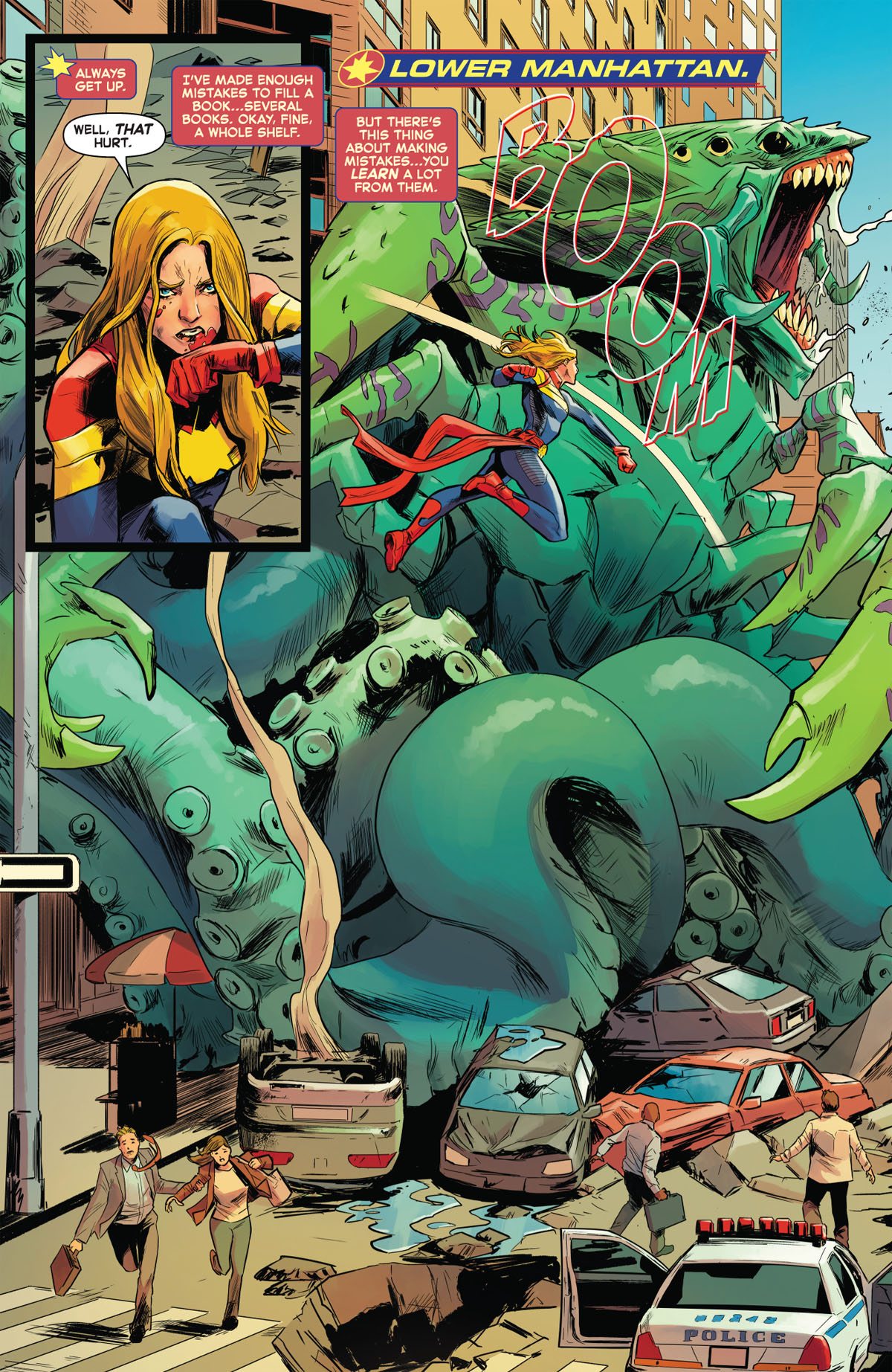 It’s a first issue, and this creative team has potential. I’m willing to give Kelly Thompson a few issues before I nope out of this. Aah, who am I kidding. Carol Danvers is absolutely my favorite Marvel character and I’m not going anywhere. Most of you have already written off Captain Marvel as unsalvageable and that’s okay. Marvel has given you buckets of reasons to do that. As for me, I remain hopeful that the new creative team will gel into something at least as special as what’s currently going on in Mr. & Mrs. X. Until then I can’t really recommend this to any but the most die-hard fans.