Well, well, well. Where has the time gone? That’s right, Batman is turning 80 this month and Detective Comics is hitting issue number 1,000. Wow. I’ll say this, if there were ever a hero who deserves a party, it’s Batman and Detective Comics certainly throws him one with this week’s issue.

Much like a party, there’s a lot of different things going on in the issue, some of it great (the area around the grill) some of it ok (the kitchen) some of it pretty weak (the crying guest who threw up and has locked themselves in the bathroom). I’m not going to get in depth about every story, as the issue is almost one hundred pages long and I’ll show my hand now, worth the price of admission. I’ll save my two favorites for last though. 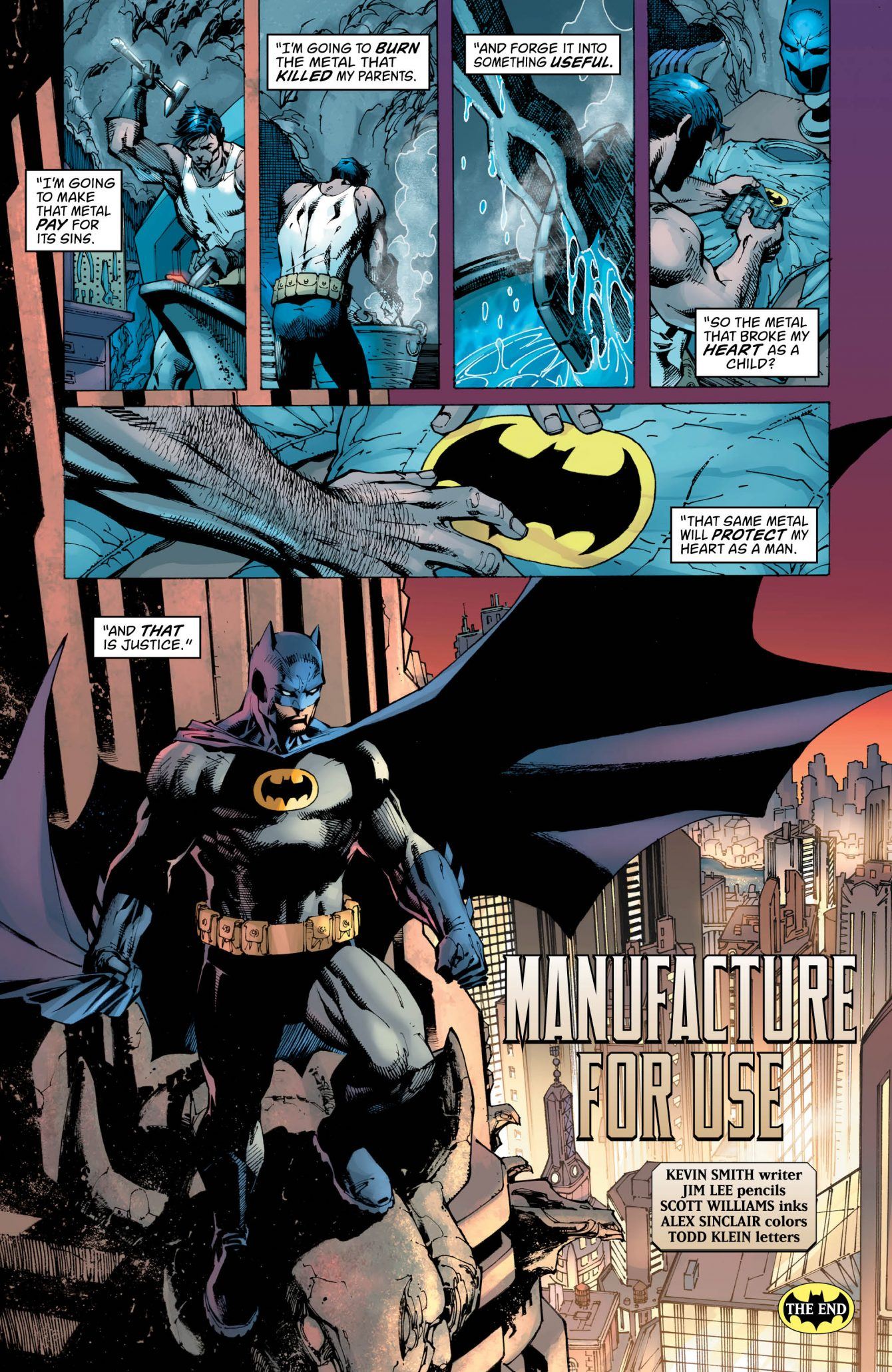 Naturally, there’s a story by Scott Snyder and Greg Capullo which is what we all wanted after such a legendary run on the New 52 Batman. It’s pretty good, and plays with the whole “Batman doesn’t know everything” angle that Snyder loves so much. I enjoyed it more for the guest stars than anything else. Then we get a Jim Lee drawn, Kevin Smith scripted story that I could’ve taken or left. I like Smith’s work (and am still waiting for him to finish up his Batman trilogy) but this story seemed a bit corny and Jim Lee’s art felt sort of either rushed or his heart wasn’t really in it. Warren Ellis and Christopher Priest throw in a couple of stories as well, and Neil Adams contributed some amazing pencil work. James Tynion IV and Tony S. Daniel also had stories in the book, and they were all right but your life won’t change after reading them. The Geoff Johns story (penciled by Kelley Jones) was fun and futuristic. 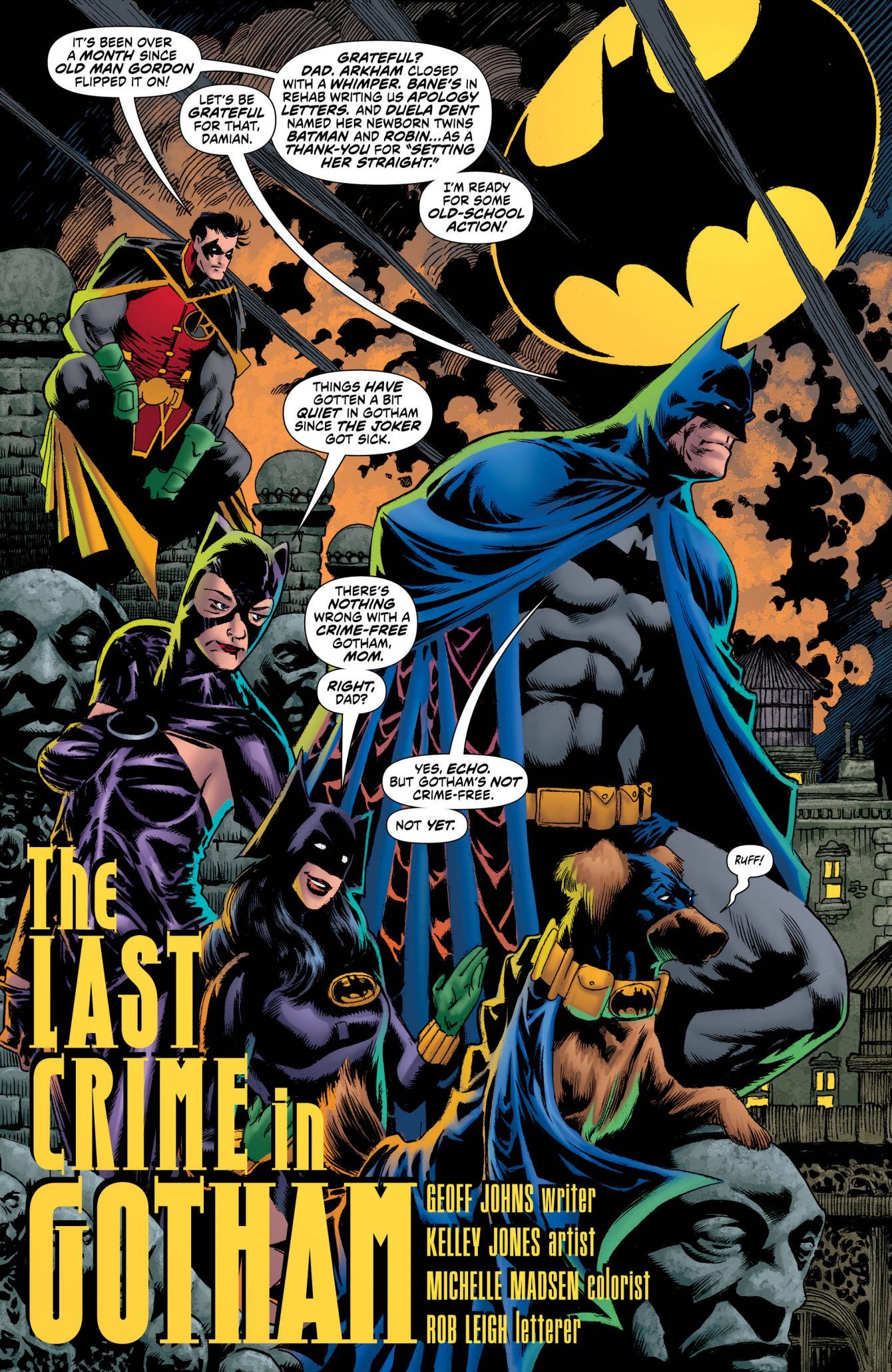 The issue hit a serious low in the story “Return to Crime Alley” by Denny O’Neil and Steve Epting, where Batman and Doctor Leslie Thompkins are in Crime Alley and a bunch of thugs try to mug them. Naturally, Batman lays the hammer down and Thompkins goes all bleeding heart about the situation and yells at Batman. She’s been trying to guilt him about his choices. This whole story should’ve been cut from the issue, and I would’ve expected better from a guy like Denny O’Neil, who has had some great Batman stories in the past. 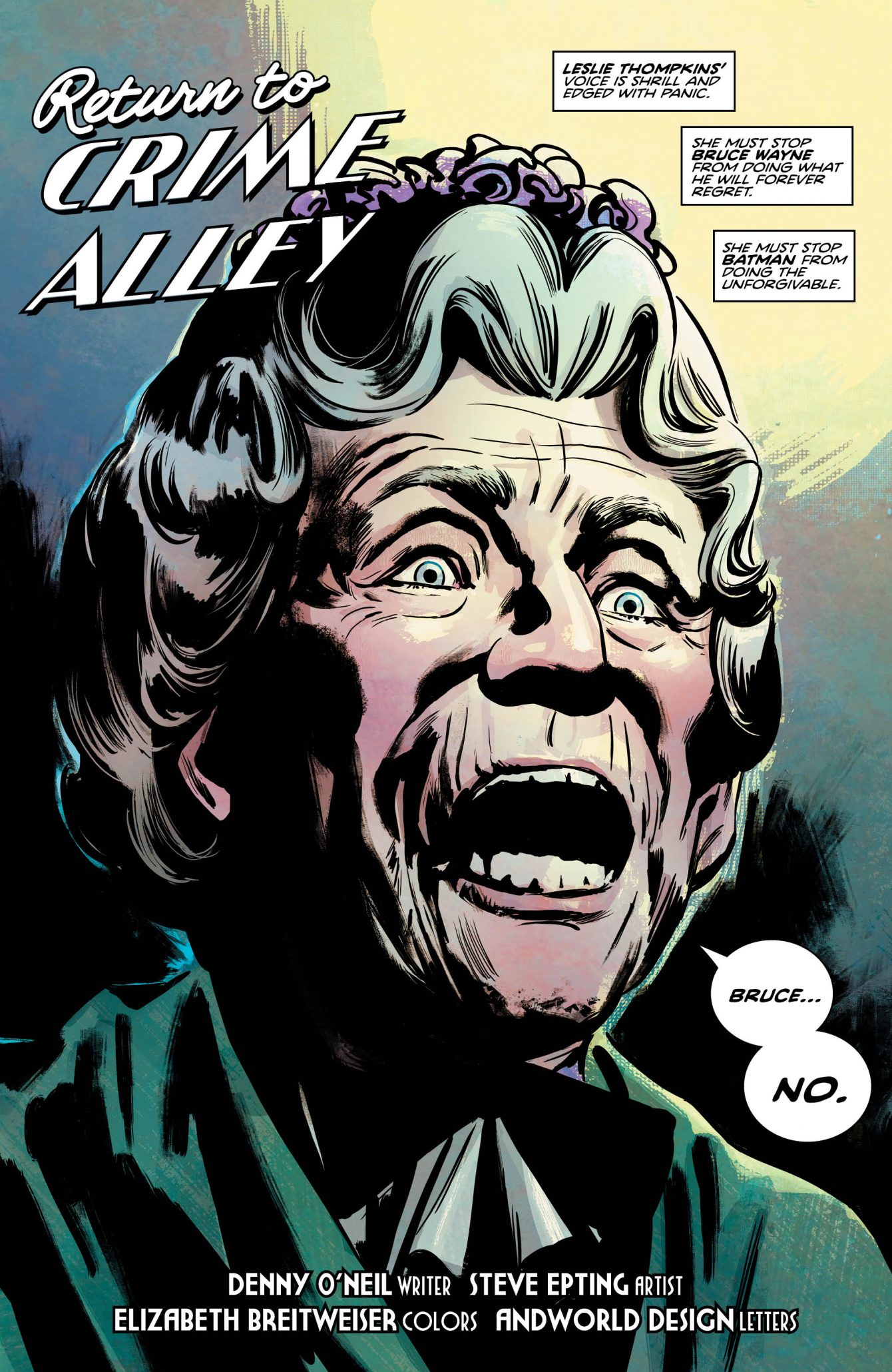 The two best stories were by Paul Dini (not that you’d expect anything less from the guy who wrote Arkham Asylum and City) and Brian Michael Bendis. Dini’s story follows the career of the worst henchman in the history of Gotham City. It’s a great read and most importantly, a lot of fun. It stole the show in my opinion.

Bendis takes us to a future with a Penguin story that shows no matter how old he gets, Batman is always three steps ahead of the competition. The art by Alex Maleev compliments the mood of the story (he also did the colors) and proves that an artist and writer who understand each other can make magic. This story made me really want Bendis to get his hands on a Batman book full time after he showed he understands Batman as well as any other writer around. 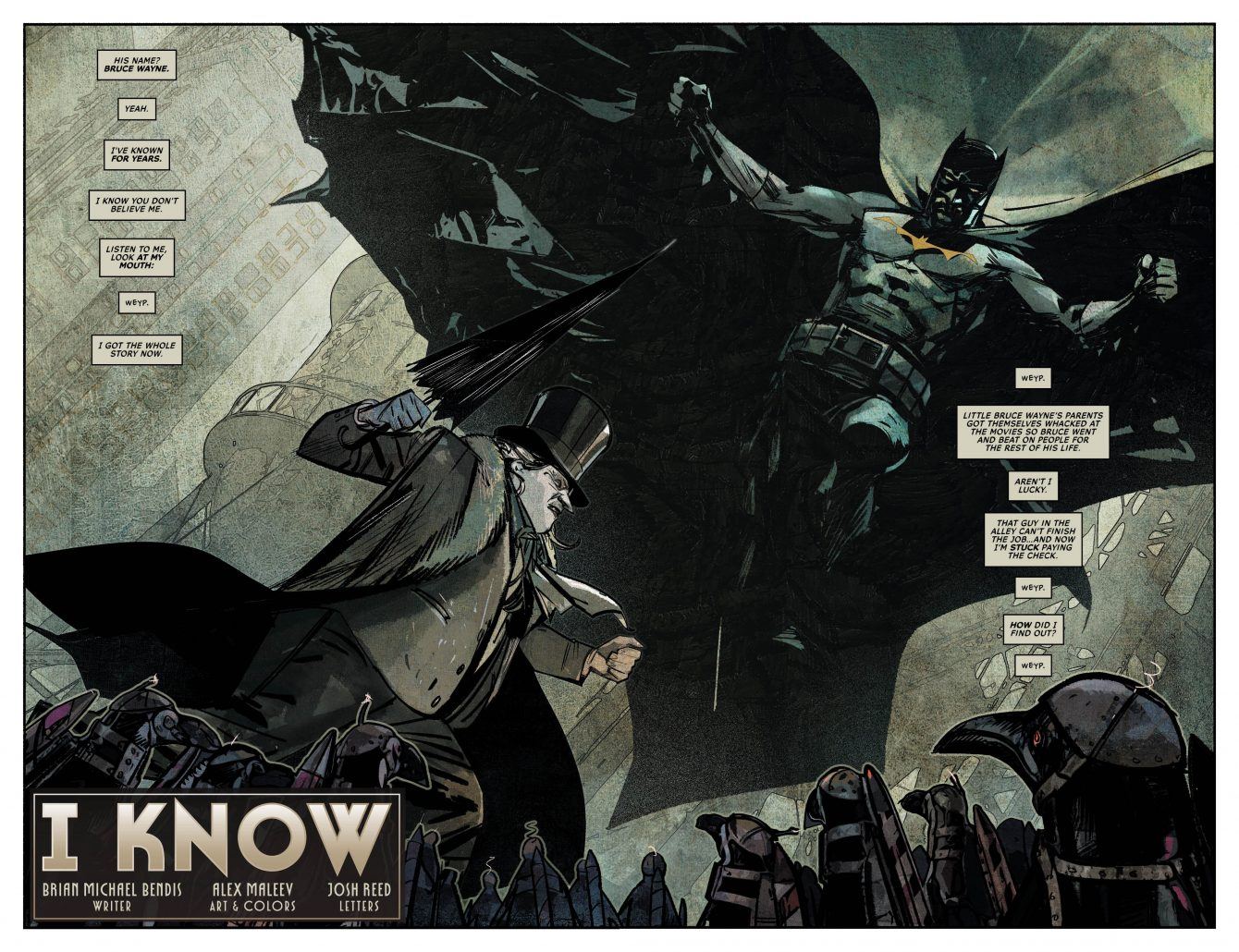 One of the biggest things I was looking forward to this issue was the introduction of the Arkham Knight. I love the Knight and have replayed the video game several times just to see him in action. The Knight is the last story in the book and it was rather anti-climactic as it’s pretty much just some inner dialogue from the Knight telling us how he’s going to kick Batman’s ass. It reminded me of the scene in [easyazon_link identifier=”B01A7J8JGU” locale=”US” tag=”boundingintocomics-20″]True Lies[/easyazon_link] where Arnold is translating for Jamie Lee Curtis “We’re cool, we’re badasses, blah blah blah.” I understand it’s supposed to kick off the next story arc, but I’d have liked a little more. I’m not the biggest Fan of Peter Tomasi, but if he handles this arc correctly he’ll win me over. Time will tell. 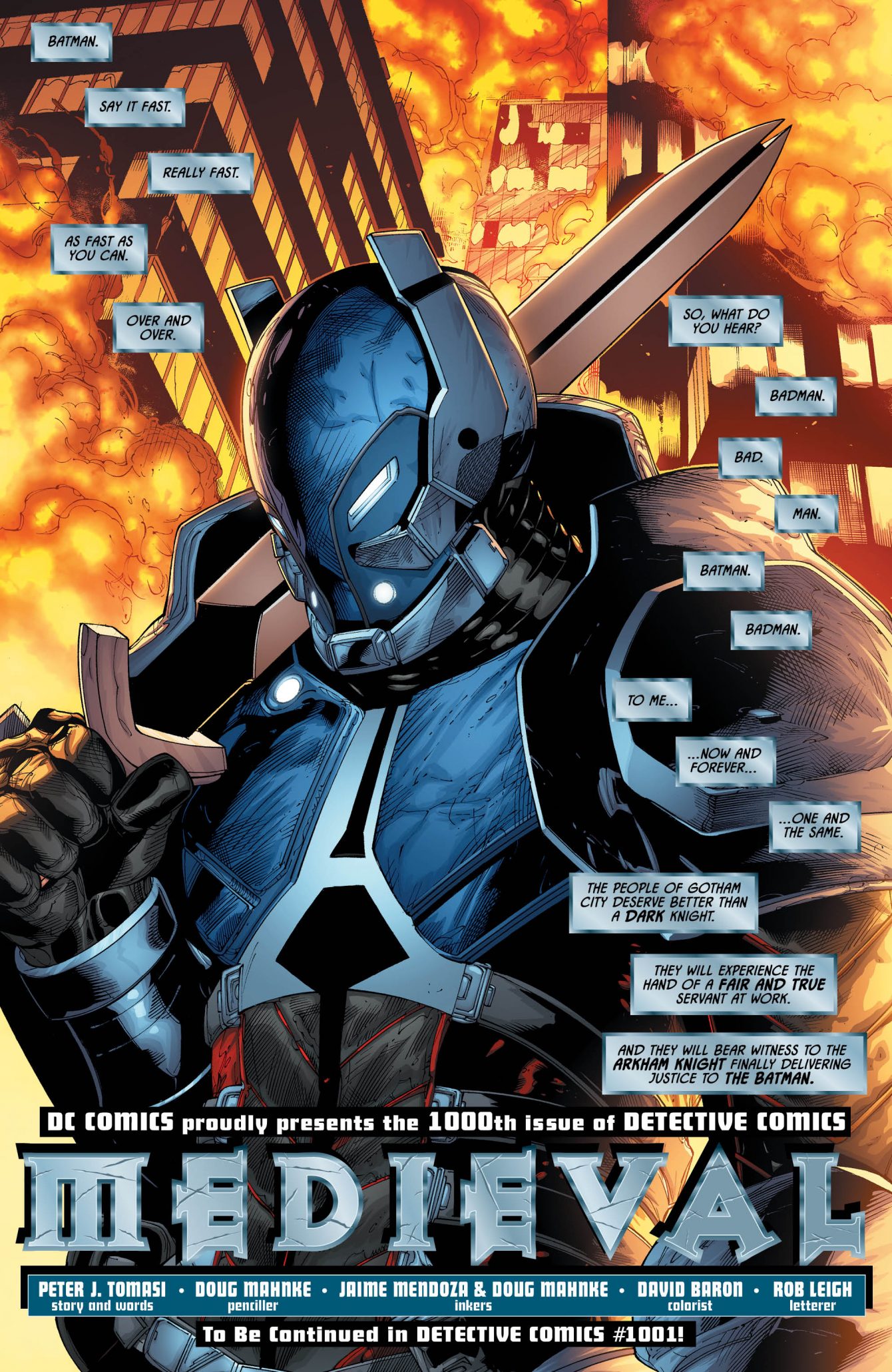 Overall, this is a great issue. You get a lot of stories and the pin ups are lovely to look at as well as the overall art in the book. For its ten-dollar price tag, you’re not going to find a much better deal. The covers all look pretty solid (I heard they’re up to over sixty of them now, so I can’t vouch for all of them) and there’s a Batman story in here that will appeal to almost everybody, no matter what era you started reading the adventures of the caped crusader. Having been in the game since 1989, I can happily give this book a big thumbs up and hope to be around for another thousand issues!