Rotten Tomatoes has revealed their critic score aka the Tomatometer score for Warner Bros. Godzilla: King of the Monsters.

Godzilla: King of the Monsters currently sits at 52% from 52 reviews on Rotten Tomatoes.

Cary Darling at the Houston Chronicle gives the film a 2.5/5. They write, ”
It’s fitting that a film that is so unapologetically conventional and predictable (even by the standards of the genre) ends with the song “Godzilla,” a cover of a Blue Oyster Cult track…As with so much of the movie, it has been done before and better.”

Glenn Kenny at the New York Times gives the film a positive rating. He writes, “It’s rather beside the point to note plot goofiness in a Godzilla picture, but this one does push its luck now and then.”

Anton Bitel at Little White Lies gives the film a positive review. He writes, “Godzilla: King of the Monsters rattles and races along through a variety of set-pieces to a literally explosive finish, while leaving the impression that a Pandora’s box, once opened, may unleash a perpetual pandemonium of sequels.”

Mick LaSalle at the San Francisco Chronicle gives the film a 2/4. He writes, “What little pleasures the movie offers are small and intermittent.

Joshua Rothkopf at Time Out gives the film a 3/5. He writes, “If you go to these things to see cities flambéed and flattened, you won’t leave disappointed. At the same time — almost impressively — director and co-screenwriter Michael Dougherty is savvy enough to make the human drama monster-shaped.”

Alonso Duralde at TheWrap gives the film a positive rating. He writes, “Part 21st-century action franchise (kick in the action early, then keep one-upping it until the big finale) and part 1970s Irwin Allen disaster saga (fill the cast with prestigious actors and give them just enough to elevate the goofy material).”

Not only has Rotten Tomatoes released their critic score, but Metacritic has as well.

The Metascore currently sits at 47 with 7 positive reviews, 11 mixed, and 5 negative reviews. 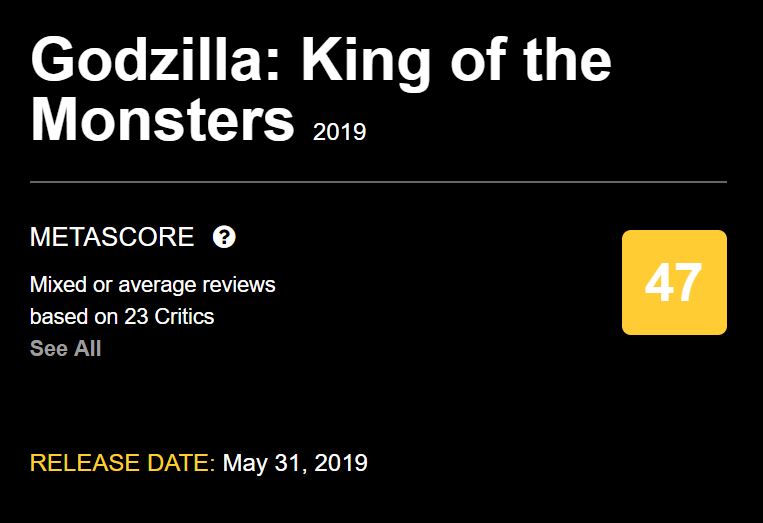 Here’s what they are saying on Metacritic:

Barry Hertz at The Globe and Mail gives the film a 75. He writes, “When Dougherty is able to keep these intelligent-ish impulses at bay, King of the Monsters is stupendous stupidity.”

Kim Newman at Screen International gives the film a 70. She writes, “King of the Monsters delivers what its genre requires. Truly awesome monster scenes fill the screen, often imbued with emotional resonance by music cues.”

Johnny Oleksinki at the New York Post gives the film a 50. He writes, “The whole movie is indistinguishable rubble.”

Ben Travis at Empire gives the film a 20. He writes, “Globe-trotting but not adventurous, action-packed but not remotely exciting, utterly overstuffed and completely paper-thin. Nuke it from orbit.

Box Office Pro predicts Godzilla: King of the Monsters will bring in $40-60 million in its opening weekend.

What do you make of these scores and these reviews? Will they affect whether or not you catch Godzilla: King of the Monsters in theaters?