Following a rumor that Alex Kurtzman might be out of the Star Trek franchise, Kurtzman revealed his plans for the next five years of Star Trek.

Kurtzman appeared on Deadline’s Crew Call podcast where he laid out his five-year plan which has some ambitious growth goals for the Star Trek franchise.

“I went to CBS and I said, ‘I think you have a universe here that is very under-utilized, and a fan base that I think is hungry for a lot more.’ And I walked them through the plan of what I saw for the next five to ten years of ‘Trek.’”

He specifically notes he plans for Star Trek to reach a much younger audience.

“Part of it was, kind of, premised on the idea that it was going to take time. What I said was, “Don’t expect us to put the first thing out, and suddenly, you know, you’re have 100 million new fans. That’s not gonna happen.” ‘Trek’ has been around for too long for that to happen — but but what we do have is new generations, and what I can tell you is that ‘Trek,’ in general, finds people when they’re about between nine and twelve.

It’s never reached younger than that; it’s never tried to, and to me that’s a hugely missed opportunity, especially because what you’re really trying to do is influence hearts and minds with really positive messages — messages about who we can be as a species and as people and what our future is. So why not start young, you know? And not for a cynical reason. Not because you know, hey, let some more toys, but because if you really want ‘Star Trek’ to reach people, then you’ve got to start young.”

Kurtzman added, “But we are definitely seeing just metric proof that the fan base is growing, and it’s growing younger — and yet, we’re keeping our current fans, and that’s great.”

As to how Kurtzman plans to attract this younger audience, he points to a number of animated shows he has in development.

Star Trek: Lower Decks is set on one of Starfleet’s less important vessels and tells the stories of its crew. The series is coming from the brain of Rick & Morty Executive Producer Mike McMahon.

Here’s what Kurtzman had to say about the show:

“The spirit of each of these shows has to feel very different… Mike’s show [for CBS All Access] is really for kids, I would say, from 11 to 70. [Laughs]

What I love so much about the way Mike is doing is planning things. What you would typically be the ‘A’ story on any [normal] Star Trek episode is happening in the background — like huge, crazy, crazy shit is going on in the background [on Lower Decks], and that’s super peripheral to the story that you’re actually focusing on. No [Trek] show has ever really done that before.”

Kurtzman also addressed the untitled animated Star Trek show that is being developed by the Hageman brothers for Nickelodeon.

“The Hageman brothers are doing [an animated] show for Nickelodeon, and that will be entirely different from ‘Lower Decks’… I won’t announce the name of the Nickelodeon show, but that’s a really different show.

That’s a show that’s for kids, younger. Full CG animation. It’s going to be incredibly cinematic. We just started seeing [storyboards] this week. It looks like, wow. It’s on par with Love, Death, and Robots in terms of beauty and lighting and cinema, so it’s a a really different feel, and Nickelodeon has been wildly supportive and I think very excited to bring a new energy to TV, you know, in animation.”

One question that a number of fans have been wondering is if the show will feature familiar Star Trek voices. Kurtzman makes it very clear that unlike Star Trek: The Animated Series which saw most of the original crew reprise their roles. These two animated shows are going in a different direction. But he does leave a bit of hope out there.

Animation is in an incredible, glorious renaissance right now. Between [Spider-Man: Into the Spider-Verse] which just blew everything open and everything Pixar’s been doing for so very long, I think what I’m excited about in the world of animation is to try all these different things to see what feels ‘Trek.’”

Kurtzman would not only reveal his plans to target younger audiences through the two animated series, but he also discussed the upcoming Star Trek: Picard show featuring the return of Sir Patrick Stewart as Jean Luc Picard.

Kurtzman was questioned as to why the show was named after a person instead of a ship or station like most Star Trek TV shows.

“It’s a great and necessary question, and it’s something that has been baked into the DNA of Picard — yes, obviously Patrick, it’s Patrick — [but] we have an unbelievable cast. And you know, the thing that I loved about the Next Gen cast is that you really could have focused any episode on any of them.

I would say the same about our cast now, that it’s such an incredibly brilliant group of actors [that are] given such amazing things to do. Without spoiling anything, I think that you will feel that.”

On that note, Kurtzman turned his attention to star and fan favorite Patrick Stewart. He opened up about how critical it was to have Stewart, not only back in the role of Picard, but to have his input within the writer’s room.

“It was essential. We spent a lot of time with Patrick, and you know what? He’s incredibly brilliant just as a human, and very warm, and obviously he knows Jean-Luc Picard better than anybody — and you know, he was really the one who from the outset said, ‘I don’t want to do this unless we’re breaking new ground. I don’t want to just play the character I played, why come back to that? We did that already.’

So it’s been a really wonderful give-and-take in our collaboration with Patrick where he very quickly came to trust that we were both going to do exactly what he said in taking Picard to a new place, but also — and he doesn’t look at himself this way — we’re reverent of him, you know? He’s Patrick Stewart! When we’re in a room with him, his opinion really matters to us, and his happiness really matters to us, and ultimately, we couldn’t do this show the way we’re doing it if he wasn’t excited about it and excited to play it.”

Finally, Kurtzman gives us some more details related to how they plan on bridging the gap between Star Trek: Nemesis (the last time Patrick Stweart played Jean Luc-Picard) and Star Trek: Picard.

“I think we’ve found a story that honors everything that people love about the character, but in ways that are not what you expect — and yet, become more and more familiar as the show goes. And that’s what’s exciting. A lot has happened to Jean-Luc Picard in the intervening years [since Nemesis]. There’s been a lot going on and he’s had to deal with some new things, he’s had to deal with some old things, and both of those things kind of come colliding together.

He’s made choices that he’s not necessarily feeling great about — and yet I think the audience will understand exactly why he made them.”

Some of what has happened in the years between those two stories have been hinted via a voice over in last month’s teaser. Though there are still many questions, we know that there is a very large possibility that the destruction of Romulus via a supernova, which birthed the Kelvin Timeline, will be a major plot point. 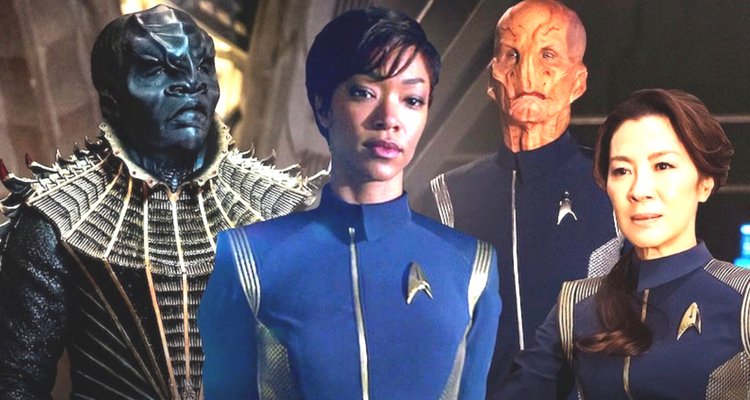 Kurtzman also fielded a number of questions regarding the third season of Star Trek: Discovery. While CBS ordered a third season, it has not begun shooting yet.

Kurtzman was quick to answer and point to Star Trek: Picard’s shooting schedule, which has a lot of resources going into it. He also clarified that season three has yet to be completely written, only up to episode five has been done:

“‘Picard’ is in the middle of shooting, we’ve broken the season and I am so happy with the scripts. We are on episode five of Season 3 of ‘Discovery.’ We’re far along. ‘Picard’ is [filming] here in Los Angeles and ‘Discovery’ is in Toronto, and future Trek shows I believe will be in Toronto.”

“Erika [Lippoldt] and Boey [Kim], who are two of our writers on ‘Discovery,’ are breaking story on [‘Section 31’] right now, and the plan is to shoot that the second we’re done with [‘Discovery’] Season 3.”

This isn’t really new and more than likely means the show won’t probably be ready for audiences until sometime after 2021.

Kurtzman also revealed the franchise will also be developing a number of new Short Treks, which are short anthology style episodes that mainly expand on Star Trek: Discovery.

Kurtzman confirms there will be six coming down the pipeline with two animated and four live action. Their arrival schedules are dependent on Discovery’s.

“That’s the other thing. It’s not just the shows, we have the Short Treks too. We’re doing six more of them. Two of them are animated [and they are] unlike the two animated shows. What I love about the Short Treks is that they are an experimental training ground, a place to experiment with different things. Directors who we’ve never worked with before, tones we’ve never tried before.

Kurtzman rounded out his five-year plan by discussing a Change.org petition requesting a series showcasing Captain Pike leading the Enterprise alongside Spock.

“I would be remiss in saying you’re going to see Spock again on Discovery because we’ve obviously jumped so far into the future that it wouldn’t make sense…. but the the idea of bringing Ethan [Peck] back, and Anson [Mount] and Rebecca [Romijn] and the Enterprise, I mean, we loved it so much, and to find a way to do that is definitely something we’re thinking about.”

What do you think of the future of Star Trek as laid out by Alex Kurtzman? How ambitious does all of this sound? With so many projects related to Star Trek, its a wonder how the studio will be able to get all this content out. Let me know your thoughts!