2019 is a year of Batman milestones. 80 years ago, the character was created by Bob Kane and Bill Finger. Plus, it has been 30 years, as of this summer, since Tim Burton’s 1989 movie starring Michael Keaton and Jack Nicholson came out and revived the Dark Knight’s pop culture status.

The past year has also brought us the recurring phenomenon of Zack Snyder’s social media sharing sprees. He’s living out a fresh nostalgia for his time as Warner and DC’s main guy.

A Scene from Batman That Didn’t Make the Cut

Long before Snyder, they had Burton, a man with his own peculiarities that got in the way back then, and other ideas that didn’t make the cut. An early draft of the script contained an action sequence that included Dick Grayson in costume. It would have brought him into the fold years before Batman Forever. The scene was storyboarded but ultimately scrapped and Robin’s reckoning had to wait for Joel Schumacher. 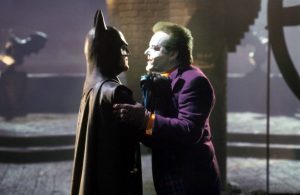 The storyboards survived, though, and were animated for a DVD special feature that was posted to YouTube in 2006. In the clip, the storyboards are glimpsed panel to panel, complete with sound effects and voice acting. Batman chases Joker on horseback through a police barricade and Dick joins the pursuit after his family’s high-wire act was fatally and explosively disrupted by the madman.

Mark Hamill and Kevin Conroy reprised their roles from the DC Animated-verse and, for Hamill, it must’ve been another routine job because he forgot about it and didn’t see the finished product until now. Others are discovering the rejected Robin scene anew now that the Star Wars star and comic-book actor took a page out of the Snyder playbook and shared it on Twitter.

This rare clip from an early draft of the 1989 Batman movie introduced Robin but was later scrapped. @RealKevinConroy & I voiced the storyboards for the sequence- most likely for a bonus on a DVD release. I’m seeing it today for the very 1st time. ENJOY. https://t.co/o2zFR7Fw8W

Who Was Considered to Play Robin?

Kiefer Sutherland was one actor brought up for Robin casting circa 1989. Marlon Wayans was under serious consideration for either Batman Returns or a possible third film directed by Burton before he was shown the door. The role ended up going to Chris O’Donnell who starred in Batman Forever and Batman & Robin.

Robin would show up later — sort of — in The Dark Knight Rises, played by Joseph Gordon-Levitt. Nowadays, Dick Grayson is the main character of Titans on DC Universe.

What do you think of the clip? Did they make the right call nixing Robin from the script? How would it have changed the film? Leave a comment.