Leading the pack is Jason Isaacs as the Soviet-raised Man of Steel whose ship landed in the USSR in the 1950s — the height of the Cold War — instead of Smallville, Kansas. An Elseworlds tale, Red Son has alternate depictions of several Superman and DC characters as well as historical figures.

March of The Penguin

The cast has one more name who deserves a special mention. As part of Superman: Red Son, prolific actor and songwriter Paul Williams marks his return to DC Animation after a two-decade absence. From 1992 to 1998, Williams supplied the voice of The Penguin in Batman: The Animated Series and The New Batman Superman Adventures. His last outing as Oswald was in the multiplayer game DC Universe Online.

Williams, far from a simple voice actor, has been well-known as a songwriter for many years. He wrote number-one songs for Barbara Streisand, Three Dog Night, and The Carpenters, and is also the writer of quite a few catchy themes for TV shows that include The Love Boat.

He’s appeared in small roles for countless films over the years, most recently playing a fancy gun dealer in Edgar Wright’s Baby Driver.

In 1974, Williams combined his acting and musical talent for Brian De Palma’s rock opera Phantom of the Paradise. Writing the musical score, he also played the Faustian villain Swan. Much like Penguin who owns and operates The Iceberg Lounge, the equally avian-themed Swan was the impresario behind the title musical venue — The Paradise. 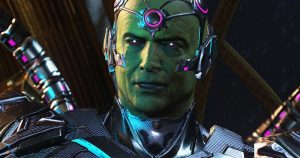 Williams will play a different kind of rogue in Red Son — that being Brainiac. First brought to the small screen in Superman: The Animated Series and played by Corey Burton, Brainiac was revamped as a Kryptonian AI who duped all but Jor-El into ignoring signs of Krypton’s destruction. (Related — First Look: Krypton’s Brainiac)

Lance Henriksen took over for Burton as Brainiac in a 2006 standalone feature, Brainiac Attacks, that has no connection to animated-series continuity. Later incarnations such as Superman: Unbound brought Brainiac (John Noble) back to his roots as The Collector of Worlds.

In the Red Son graphic novel, Brainiac collaborates with Lex Luthor to shrink a Soviet city which wound up being Stalingrad. Superman eventually takes them down and seizes Brainiac’s central processor. While he manages to retrieve Stalingrad, Superman can’t restore it and its people back to normal size; a sole failure in his life that brings him massive guilt.

If this is beat for beat the Brainiac Paul Williams plays or if his part gets expanded is not clear yet. Find out when Superman: Red Son comes out on all major formats in early 2020, likely January.