Teases for a forthcoming Batman game continue and new ones offer some idea of who the villains might be. Warner Bros. Games Montreal, developer of the Batman: Arkham Origins game, posted videos on their social media earlier in the week. The first dropped on Batman Day.

On the 22nd of this month, Bat-Signals were projected onto buildings around the world commemorating the 80th anniversary of the character. Sharing a video of one celebratory projection, WB Montreal added interruptions by four cryptic symbols difficult to make out.

@WBGamesMTL is proud to celebrate Batman’s 80th anniversary with rest of the world during #BatmanDay #Batman80 pic.twitter.com/4VGz9kBWxj

Writer Scott Snyder retweeted the post with a comment referring to one of his most well-known creations, Gotham’s Court of Owls: “Wait for it… #bewarethecourtofowls.” He took down the tweet but it was screengrabbed. 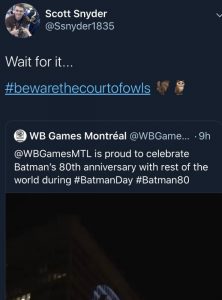 Snyder wrote Batman and Detective Comics during the New 52. He and Greg Capullo created The Court and their trained assassins, The Talons. These elements became a big contribution to Batman lore and are still utilized, in print and on TV. Notably the Owls became a plot point on Fox’s Gotham. (Related: 5 Batman Stories Matt Reeves And DC Comics Should Adapt To Film And 5 They Should Avoid Like The Plague)

An elite secret society that rules over Gotham through fear and intimidation employed by their Talons, they appeared in the Arkham game series as well by way of an Easter Egg in Batman: Arkham Origins. (Related: New Batman Arkham Concept Art Leaks; Game Reportedly Axed)

The group is also known for their bizarre masks that resemble the faces of various owl species. When the symbols were clearly shown in another tweet the following day, part of the first symbol revealed vaguely resembles the Court of Owls’ masks. Two other symbols have a flickering flame shape in the center that looks somewhat similar.

The third symbol is the most striking because of its design and detail. It bears the face of some kind of devil or demon. Niche Gamer writer Ryan Pearson theorizes it has something to do with Ra’s al Ghul and his League of Assassins — another ancient cabal jockeying for power in Gotham City.

It sounds accurate; al Ghul’s name means “The Demon’s Head” and he made an appearance in Batman: Arkham City. He, the League, and The Court of Owls might factor in the storyline of the developing game.

We’ve known a game was coming for several weeks. Osama Dorias of WB Montreal revealed in July on Twitter he was working on a “redacted” DC-related project. Following that, Batman: Arkham Origins voice actor Roger Craig Smith coyly teased earlier this month he is in the middle of something potentially of the WB banner.

The prime indication Smith is at work on a Warner property — and specifically Batman — is a reply to him by WB PR guy Gary Miereanu that said: “Your publicist thanks you, and promises we’ll let the cat out of the bag reasonably soon.” (Related –Batman: Arkham Origins Voice Actor Teases New Game in the Works)

What do you think? Is there a game featuring The Court of Owls and Ra’s al Ghul coming? Leave your opinion below.