The leaked photos, which can be seen below, show a redesigned Emperor Palpatine sitting on a throne and firing Force Lightning up into the air as Rey looks up at him from below.

SAVED YOU $20 PER TICKET pic.twitter.com/GWXCgbVb8s

You can find the image of Palpatine linked off site here in case it gets taken down.

The second leaked photo shows both Rey and Kylo Ren wielding blue lightsabers side by side.

Just like GOT all the leaks are coming true… #notmystarwars pic.twitter.com/mJOZtNlcII

In case, Disney pulls down the tweet, you can see it here.

YouTuber World of Geekdom posted a screenshot of an email he received indicating Disney put a copyright claim on his video titled, “MAJOR STAR WARS THE RISE OF SKYWALKER LEAKED IMAGES!”

World of Geekdom stated in YouTube Community post, “Here is Disney COPYRIGHT CLAIMING my new video that showed the LEAKED images from RIse of Skywalker, which are OBVIOUSLY REAL because they are claiming copyright. I understand companies getting mad at leaks (trust me i know better than anyone) but this is ridiculous.”

Here’s a look at the screenshot: 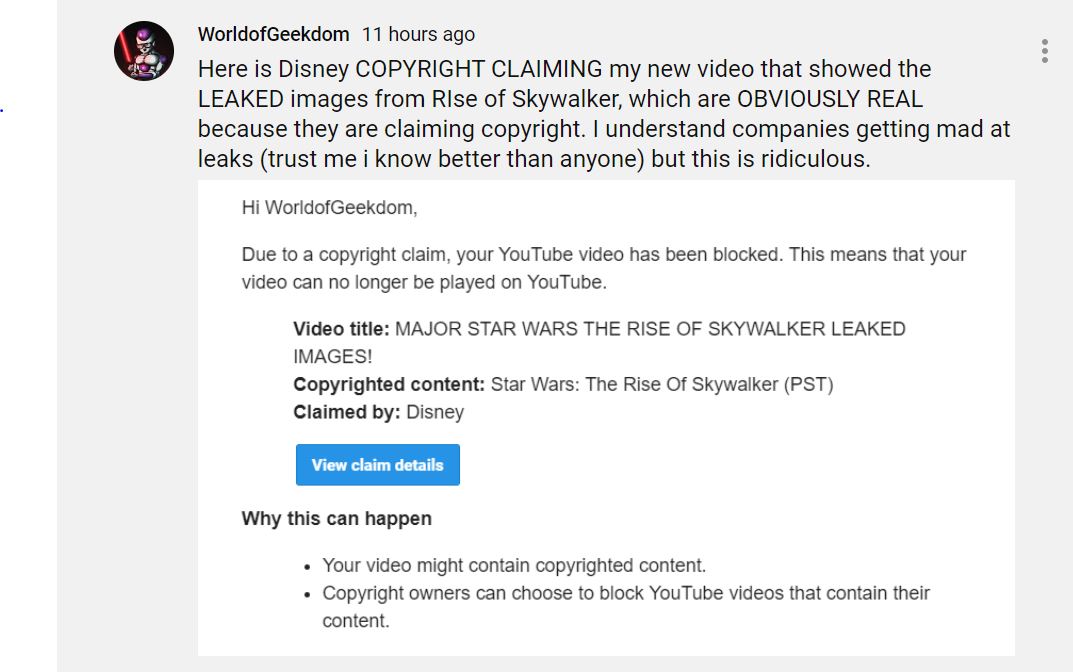 World of Geekdom would then address the situation in a new video.

“These were images that popped up on Reddit that I posted and made a video discussing what the images pertained to and what happened in the spoilers for the film and where those scenes come from based on what we’ve heard.”

“This is a major deal, ladies and gentleman. Don’t worry about my channel because they did not give me a copyright strike and I am disputing it. But what we have here is what we call the Streisand effect. Those leaked images that I promoted on this channel that I showed from Reddit are 100% real. Now we know for a fact they are.”

What do you make of these new images that appear to confirm the leaks from JediPaxis and Making Star Wars? What do you think about Disney issuing a copyright claim against World of Geekdom?