After being revealed as the new voice for Broly in Dragon Ball FighterZ following former voice actor Vic Mignogna being let go from the role, Johnny Yong Bosch was accused on Twitter of sexually inappropriate conduct with women he had formerly worked with, but Bosch was quick to strongly refute the accusation.

On December 3rd, as Bosch’s role as Broly sparked numerous reactions, discussions, and opinions across social media, a small account by the handle of ‘Mister Doorknob’ interjected, in a pair of since-deleted tweets, that they had “heard some sketchy things about JYB himself.”

They specifically stated that Bosch would make a female host on AnimeTV, an anime television talk show previously produced by Bang Zoom! Entertainment and hosted by Bosch, “wear short skirts/revealing outfits to bring in views even though she didn’t want to.” 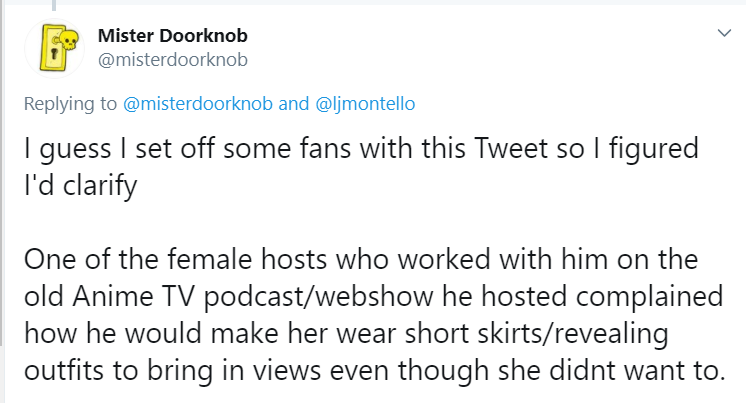 However, Bosch took to his personal Twitter account to denounce the accusation, urging his accusers to contact BangZoom or “any female that was on the show” for further proof.

He called the accusation “a complete lie and the dumbest thing I’ve ever heard.”

TOTAL BS. I was cast as a host and nothing to do with wardrobe for others. Just ask those in charge of the show over at @BangZoom This is a complete lie and the dumbest thing I’ve ever heard.

In fact we could ask any female that was on the show but I imagine whoever you’re talking about doesn’t exist so what other story do you have? Ooh I got one but it’s about your mother so…🤷🏻‍♂️ could be a rumor.

The only one I’m harassing is you. Because I’m calling you out. Go to imdb and look up every female from animetv tell me who would’ve said this? Go ahead doorknob. Let’s hear it. You can’t, can you?

After Bosch fired back against the accusation, the ‘Mister Doorknob’ account was deleted.

After this deletion, Bosch attempted to quell the discourse, stating that this accusation was just ““one” random flyby” and not the coordinated efforts of “many”:

Bruh, what are you doing? Lol That’s how rumors spread, not “many” just “one” random flyby.