A new Star Trek: Picard leak alleges to reveal the true nature of Captain Rios. If true, it could completely alter what people were expecting from the character.

The alleged one-page script leak comes from 4Chan, where an anonymous poster prefaces it, “I got this from a reliable friend. He’s a guy who has shared stuff with directly people commenting on Trek before, but he’s also been burned by Doomcock. Still with all the firings going on left and right at All Access for most jobs under the Star Trek brand, he figures why not share directly to 4chan before he gets the axe.”

The alleged script sees Picard, Raffi, and Jurati give their goodbyes to Rios. While Picard and Raffi beam away after saying goodbye, Rios turns to Jurati who attempts to get him to live with her in Osaka.

She tells him, “I guess this is goodbye. But, you know, it doesn’t have to be.”

Rios attempts to stop her saying, “Agnes, I –”

Jurati interrupts him, “Please, let me speak! I haven’t felt this way in a long time, long time. I haven’t been able to open up to someone since Bruce, or maybe even before. With you it just feels so real.”

She interrupts him again, “I’m just saying that I don’t need to beam down, not alone. Come with me to Osaka. Let’s see what we can make of this.”

Rios replies, “Mierda. It looks like I just need to show you…”

He then commands the computer to “disable Emergency Command Hologram.”

With the ECH disabled Rios is revealed to be a hologram and fades away.

The leak was shared to Twitter by Angry Mr Flibble.

Alleged script leak for Star Trek Picard concerning Rios. From 4chan so take with the usual dose of salt. pic.twitter.com/dv5wiflBgS

You can see the full leak below. 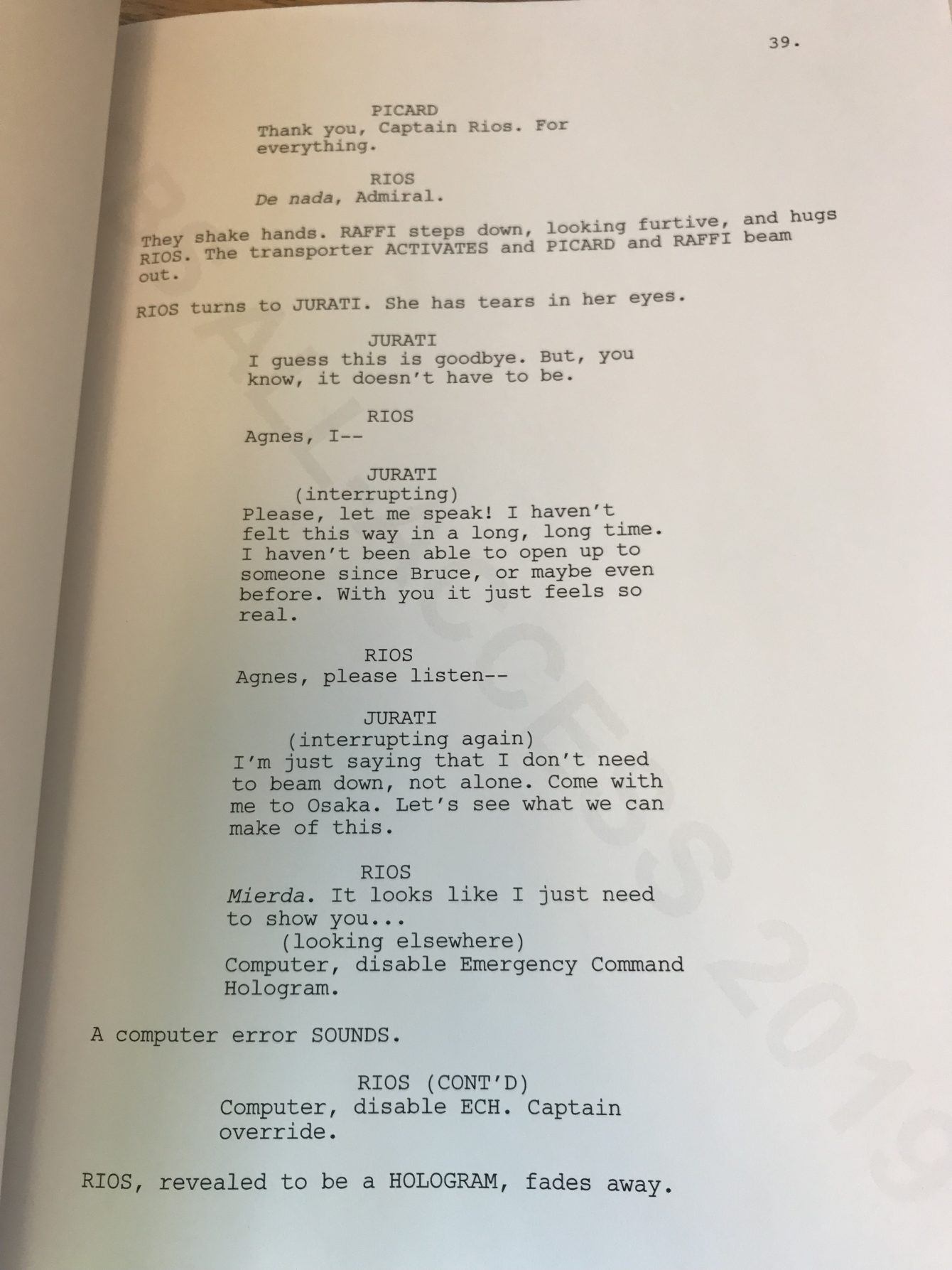 This isn’t the first time leaks for Star Trek: Picard have come from 4chan. Back in late January, we reported how leaks that came out a week prior to the show’s premiere turned out to be true to an extent.

That leak detailed that “Rios sacrifices his life by the end of the season, but he is survived by his EMH doppleganger, who will stay with the crew in season 2.” If this script is true, it appears to back up the original leak. Although, it still doesn’t reveal how Rios dies or if he in fact does die. But it does appear that the EMH doppleganger will take over at some point if it hasn’t already.

What do you think of this leak? If you’re watching Star Trek: Picard would this be a clever move for the story? Let me know your thoughts on this and the show!