WDW Pro is the Disney leaker who previously reported that Disney executives were “livid” at Lucasfilm hiring Leslye Headland, the former personal assistant to Harvey Weinstein.

He previously indicated they were livid at Lucasfilm because she “comes with significant PR baggage, potentially legal baggage, and did so without consulting Disney or their legal department.”

Now, WDW Pro has elaborated on why Disney executives were livid at Lucasfilm for allegedly hiring Headland.

“So just received this info: One of the reasons Leslye Headland is such a PR issue is because of quotes like these:

‘It was so funny and great. When I was working there, that was all I wanted — I would daydream that someday I’ll be making movies and Harvey will buy them and, and he will want to support me. You know, as coworkers essentially. There’s nobody like him. He’s genius. You sit across from him and you’re like, “I cannot believe how brilliant this guy is.” So his interest in me as a filmmaker just makes me feel like I made the right choice to move on.’ — https://ew.com/article/2012/02/28/harvey-weinsteins-former-personal-assistant-writes-tell-all-play-sorta/“

WDW Pro adds, “You have to understand, quotes like these come WELL after there were many, many, many reports about Weinstein and his predatory, criminal behavior towards women. And while you might think the hundreds of social media posts she had disappear in conjunction with the Variety leak were all lewd things, the truth is they were often loving, over-the-top endorsements of Weinstein.”

“Additionally, Bob Iger is currently being sued by Paz de la Huerta about Harvey Weinstein (https://www.vanityfair.com/hollywood/2019/08/paz-de-la-huerta-harvey-weinstein-lawsuit-disney-bob-iger), which means that not only is he attempting to get out of that situation… but Kathleen Kennedy has brought the fox into the hen house by bringing in Harvey Weinstein’s personal assistant, and NOBODY at the top of Disney knows what information she was privy to her in her time working directly under Weinstein. I was curious what the legal issue was that Disney was concerned about beyond the PR issue, but that’s the big one I’ve discovered. You could potentially, although perhaps (?) unlikely, see a situation where Kathleen Kennedy has hired someone who would have compromising information about the CEO, former CEO, and others at Disney.”

He concludes, “So now the fact that Lucasfilm hired someone with significant PR issues becomes more intriguing, AND you begin to understand why Disney execs were livid about Headland not having been previously vetted outside of Lucasfilm. So what is Kathleen Kennedy’s play here?”

WDW Pro would also cite Headland deleting over 200 Tweets before Variety reported on the rumor that she would helm a female-centric Star Wars series. 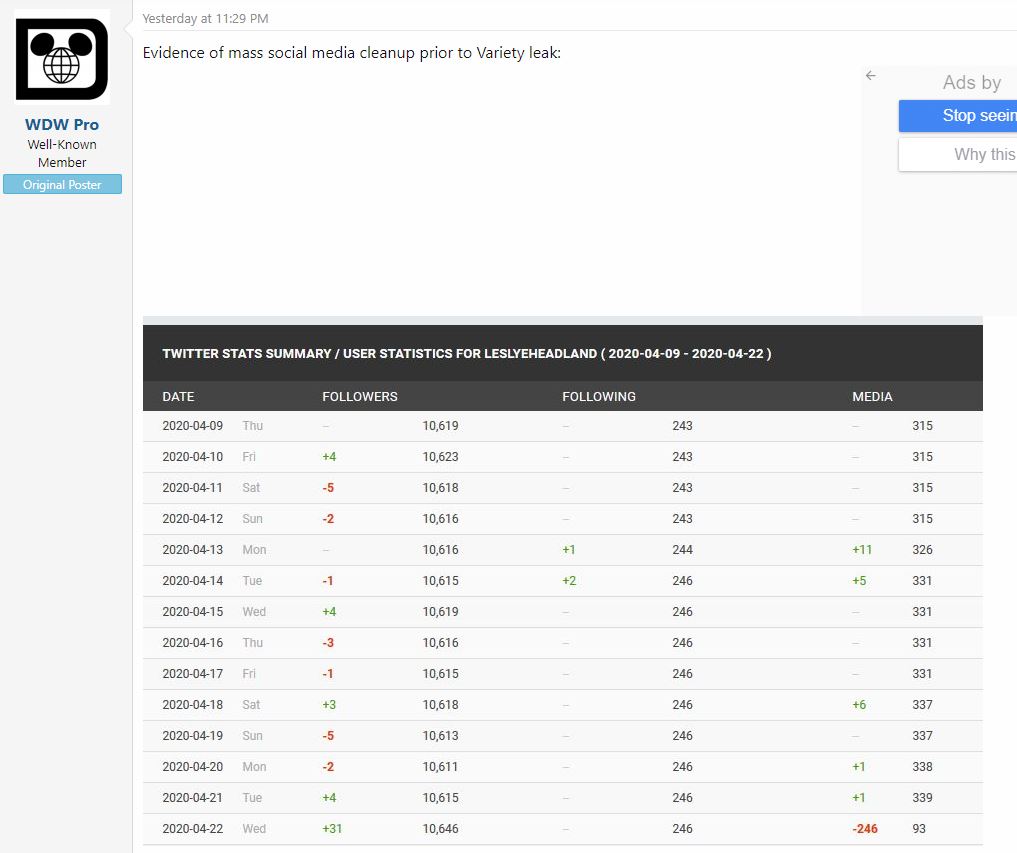 The hosts of the Toxic Feminity podcast that include Geeky Candi, O.G. Starwars, and Merry Mayhem on Midnight’s Edge YouTube channel also documented Headland’s comments to Entertainment Weekly as well as other conflicting comments and statements regarding Harvey Weinstein and women.

Merry Mayhem also stated, “She’s out of the situation. She’s capable of stepping away. And chooses. Chooses to reengage that. That’s not a victim.”

Geeky Candi added, “I was so f***ing livid when I read this part. Every time I read that last little paragraph it’s so gross. You guys, it’s the same person that just said in 2018 that said she was scared of him.”

What do you make of these alleged reasons for why Disney executives would be livid by Lucasfilm’s rumored hiring of Leslye Headland?