The campaign, created by Atlantic Records senior director of marketing Jamila Thomas and Platoon senior artist campaign manager Brianna Agyemang, initially began as a call on music artists to reflect on how their industry “profited predominantly from Black art.” The campaign has since been adopted across social media, with users posting an image of a solid black square to show their solidarity and support for black individuals, specifically artists.

On June 1st, 2020, Campbell posted the symbolic black square to his Instagram page, stating that not only would he be supporting the campaign, but that he would temporarily be “suspending all business in solidarity with the black community and all of our friends and colleagues of color and to reflect and educate ourselves.”

The comments section of Campbell’s post was soon flooded by fans who took issue with Campbell’s support of the campaign, finding the simple act to be a hollow example of ‘virtue signaling.’ 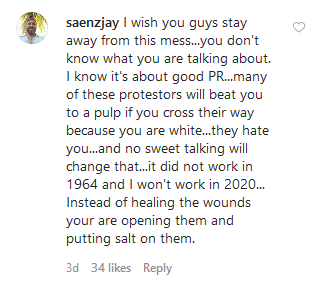 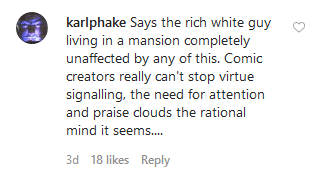 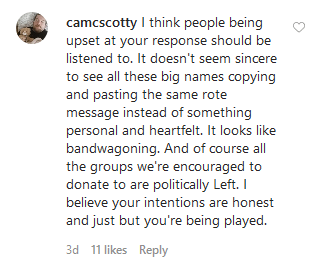 After one fan announced that Campbell had lost his business due to his apparent virtue signaling, Campbell stated that “there’s a lot of boycotting you need to do today, referencing the overwhelming public support for the campaign. 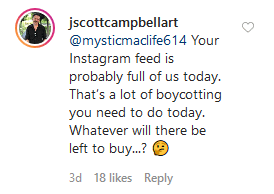 In response to another fan who asked if “maybe just maybe comics can remain an escape,” Campbell encouraged the fan “please, go ahead and abandon comics, hell, abandon all entertainment for all I care, since you cannot deal with any of us artists and creators getting involved and yes, serious for one lousy day.” 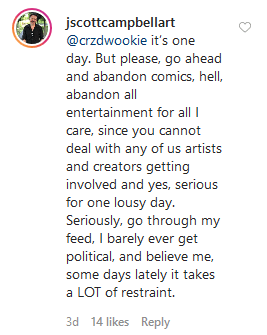 Directly addressing his alleged support for the rioters, Campbell described those who have used the protests for opportunistic damage as “idiots looting TVs and breaking store windows are opportunists who aren’t invested in a resolve of this in either side.”

He added, “No one is in support of looters and rioters and it’s probably a good thing that the mostly peaceful protests aren’t going past sundown curfews right now for those reasons.”

He then added, “And we’ll be back to making comics and getting off the political slant tomorrow.” 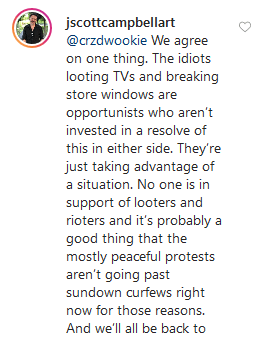 What do you make of J. Scott Campbell’s comments?