CBR, who is owned by Canadian company Valnet Inc., is back at it again. They published an article by Hector Valverde titled, “Marvel Should Stop Selling Punisher Merchandise.”

The article comes on the heels of Punisher co-creator Gerry Conway describing the Punisher logo as a symbol of “lawless police oppression.” He would go on to declare that he was looking for artists to participate in a fundraising project for Black Lives Matter to “reclaim the Punisher skull as a symbol of justice.”

It also comes after CBR published a hit piece on Captain America on Memorial Day and then proceeded to delete it after significant blowback.

While Valverde didn’t describe the logo as a “symbol of lawless police oppression,” he explained why he was calling for Marvel to stop selling Punisher merchandise saying it is “to stop police and military from wearing and displaying the Punisher logo.”

He specifically argues that he wants Marvel to stop selling Punisher merchandise so it limits “the police and military’s ability to cop the Punisher into their public image.” 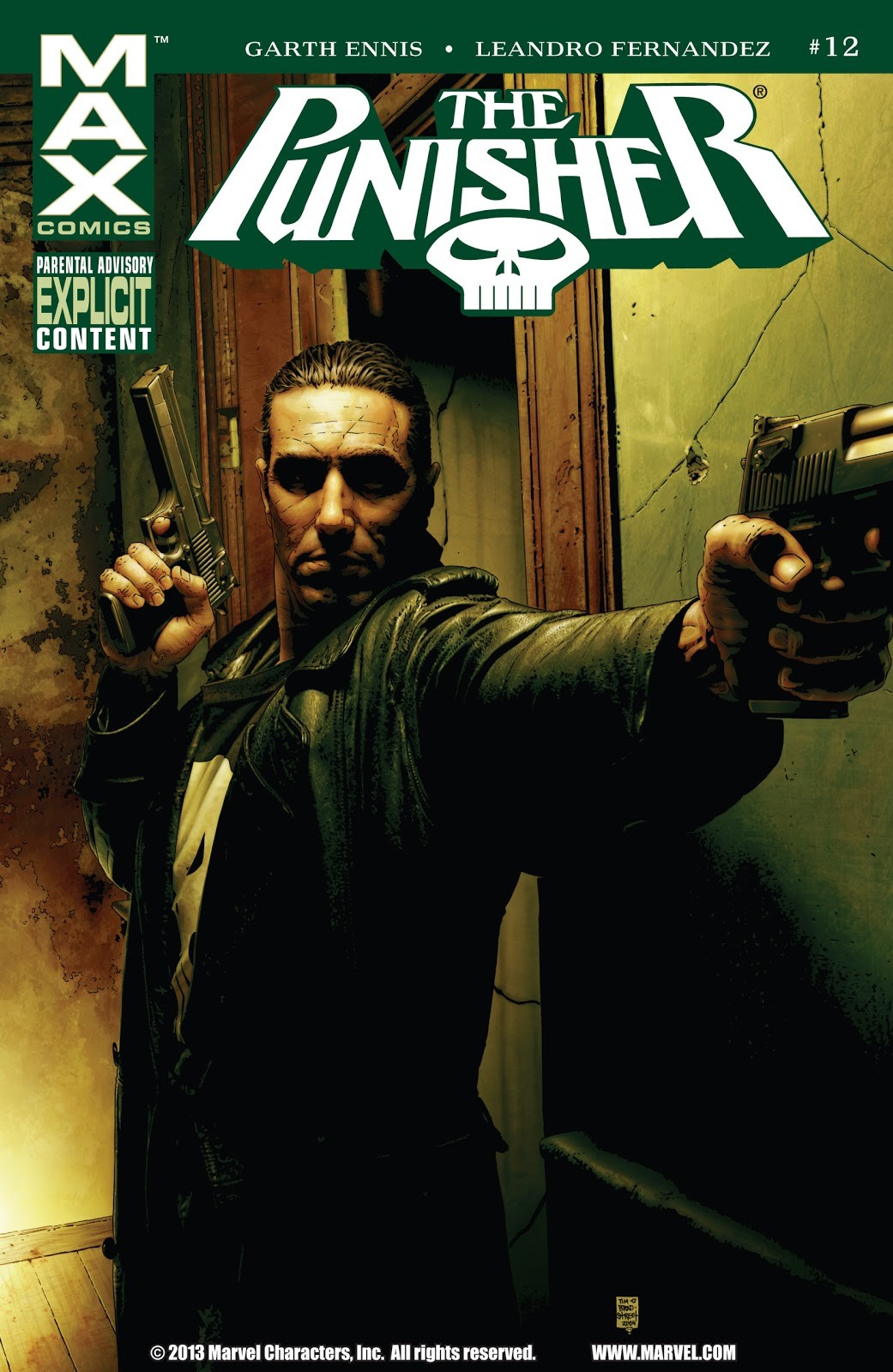 Valverde explains, “Countless police officers have misguidedly appropriated the ragged skull on the Punisher’s chest into a twisted symbol of “justice” fueled by aggression and dominance.”

He adds, “It’s the total, unbelievably tone-deaf antithesis of what the character stands for, and is propagating a dangerous mindset among those who are supposed to serve and protect.”

Valverde then absurdly claims that “Marvel is at least indebted to cutting off the commercial traffic of these products and the hazardous messages they convey.”

CBR and Valverde make it clear that the goal of the article has nothing to do with The Punisher. It has everything to do with the people using The Punisher logo. As Valverde clearly writes he wants Marvel to stop selling the logo specifically to limit it to the “police and military’s ability to cop the Punisher into their public image.”

If police and military were using the X-Men symbol, I’m sure CBR and Valverde would have published an article titled “Marvel Should Stop Selling X-Men Merchandise.”

They don’t care about the logo, they are only using it as a way to bandwagon on to the vitriolic rhetoric being spread in the wake of George Floyd’s death to attack police officers and police departments nationwide.

Many of the major organizations spouting this rhetoric is Black Lives Matter and Movement 4 Black Lives which have called on police departments nationwide to be defunded. 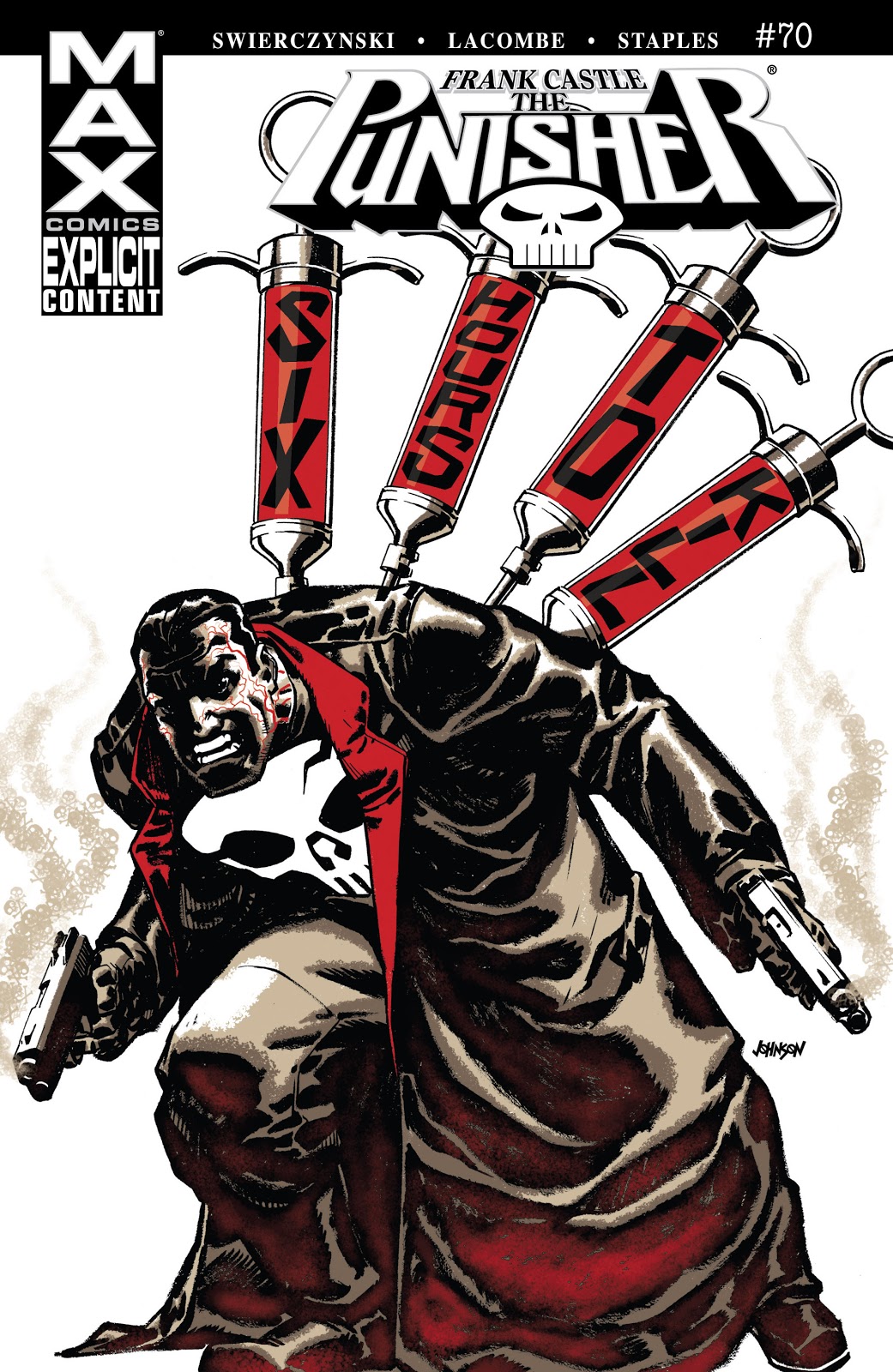 Valverde is also wrong about what The Punisher symbol represents. It’s not a “twisted symbol of ‘justice’ fueled by aggression and dominance.”

As I wrote last year The Punisher logo is a symbol of incorruptibility. It’s a symbol of what is right and just and bringing that justice to the world.

That idea is reiterated in The Punisher’s stories as he is not afraid of targeting those who are wrong even if they are law enforcement. 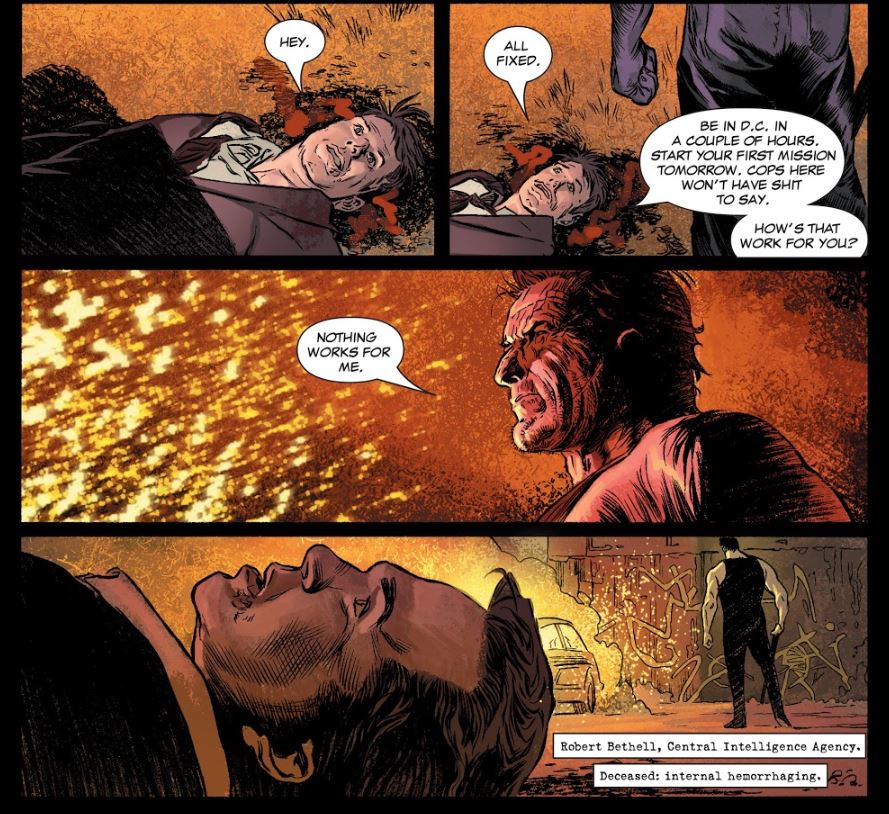 Not only does Bethell die at the hands of The Punisher, but he also kills his former partner Micro after he confessed to being involved with Bethell and the heroin trade.

In fact Garth Ennis even described that The Punisher is a “spectre of vengeance moving like a virus within the criminal psyche, he fulfills some primeval need within society to judge and punish its worst transgressors.” 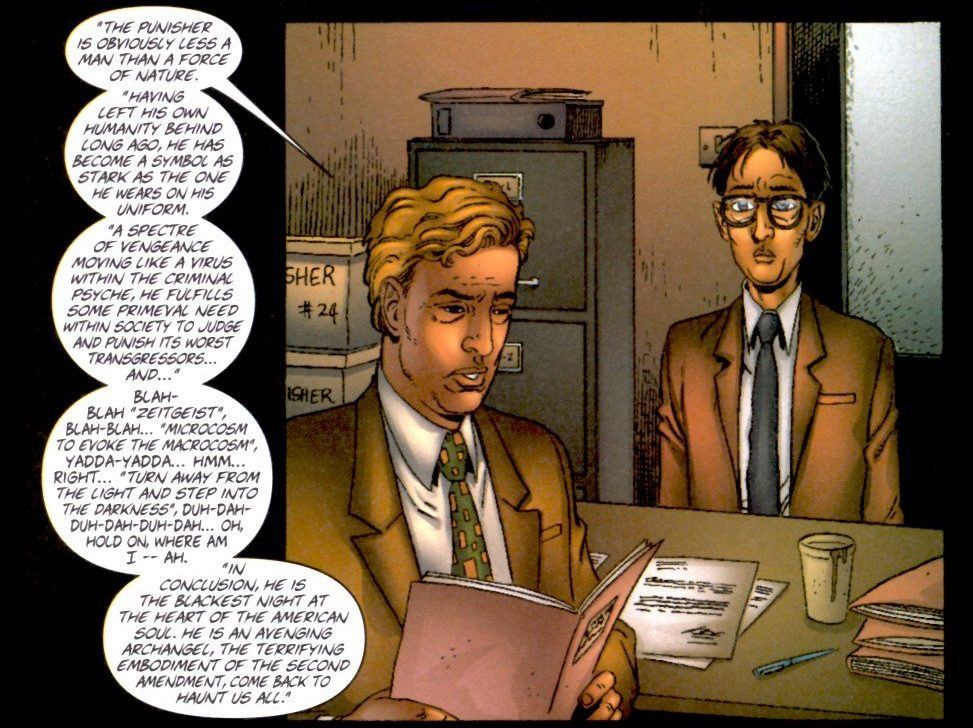 In this instance, the Punisher logo could be used to let criminals know they won’t escape justice if they do escape the law.

Earlier this month, Marvel Comics did respond to police and military officers using The Punisher logo. A Marvel spokesperson told io9 that their stance on the logo being used by police was published in The Punisher #13 by Matthew Rosenberg, Szymon Kudranski, Antonio Fabela, and Cory Petiti.

In that story The Punisher has returned to New York City on the hunt for Baron Zemo. After executing a man who has been violently attacking women and robbing them at knife point as well as a top Hydra agent, Castle is stopped by two police officers.

During the police stop they show him that they have a Punisher decal on their logo, Castle responds by tearing the decal off the car and tearing it up. He tells the officers, “I’ll say this once, we’re not the same. You took an oath to uphold the law. You help people. I gave all that up a long time ago. You don’t do what I do. Nobody does.”

Castle adds, “You boys need a role mode? His name is Captain America, and he’d be happy to have you.” 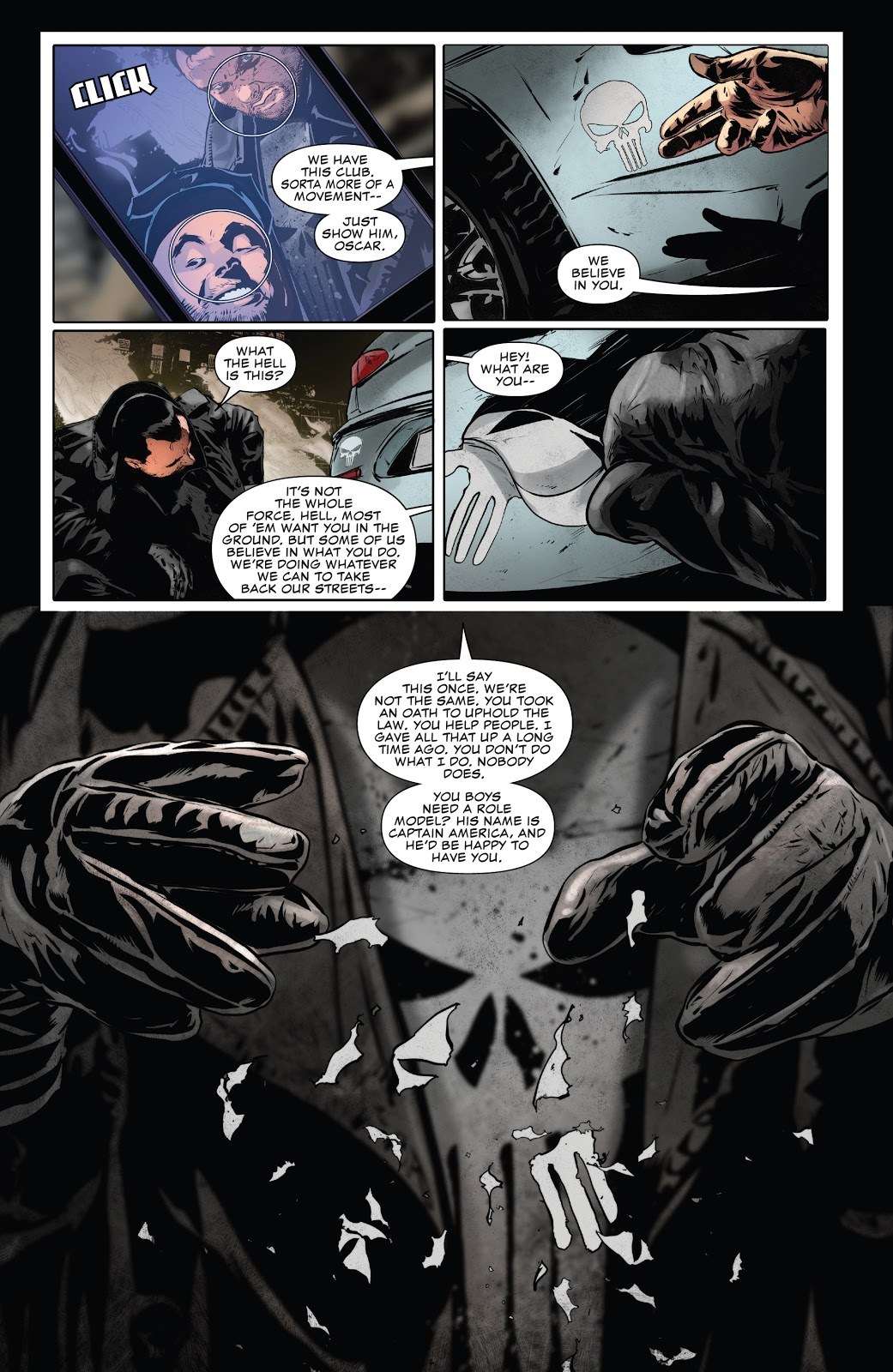 While that might be Marvel’s current stance, in The Punisher film starring Dolph Lundgren, Frank Castle was a police officer before he was murdered in a mob hit.

Not only was he a police officer in The Punisher, his comic book history sees him as a Marine. In fact, in The ‘Nam #53, The Punisher adopts the skull logo from a Vietcong sniper.

Marvel Comics even put a Vietnam era helmet on top of the Punisher logo on the covers for The ‘Nam. 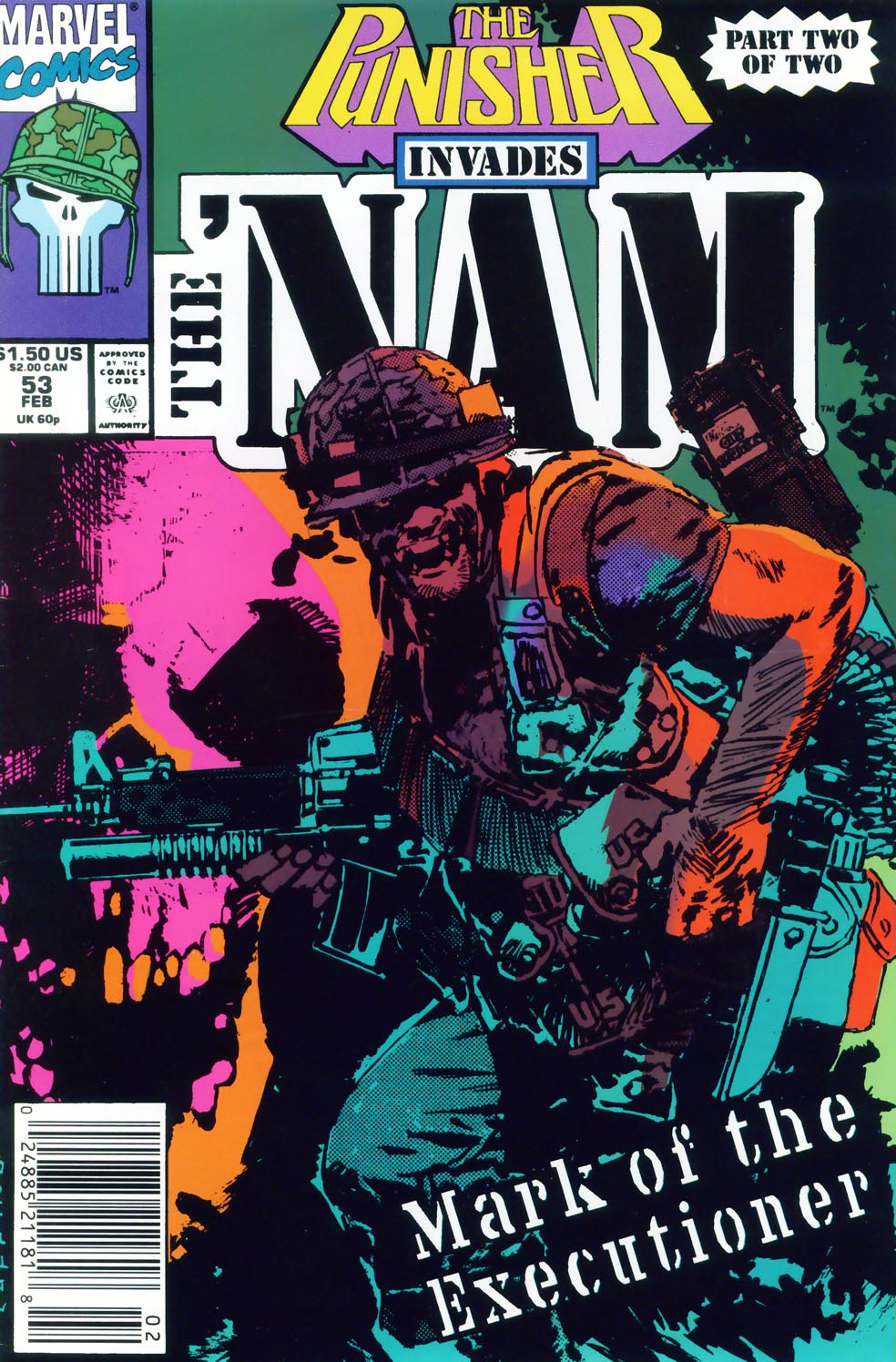 As for whether or not Marvel will stop selling Punisher merchandise it’s unclear.

Even if they do decide to stop selling Punisher merchandise, it won’t stop people from sporting it. And it’s not like a skull symbol hasn’t been around for thousands of years before The Punisher even came into existence.