Voice actor Sean Chiplock has accused video game YouTuber and journalist Mekel Kasanova of being directly responsible for a successful doxxing attempt against The Legend of Heroes: Trails of Cold Steel lead, an accusation which has led to Chiplock attempting to warn other industry professionals against working with the independent content creator.

On June 26th, Kasanova published a review of the recent Nintendo Switch release of the third and latest entry in The Legend of Heroes: Trails of Cold Steel series (and eighth in Nihon Falcom’s overall Trail franchise).

Showering the title with high praise, Kasanova’s review declared the title “one of, if not the best JRPG of 2019,” even concluding a giant graphic reading “You Need This!!!”:

Kasanova stated, “The voice acting is superb. Y’know, I gotta give it up to Sean Chiplock, the man is a fantastic voice actor. Him, Joe Zieja, and the whole rest of the cast bring these characters to life and makes you feel like you have that tangible one-to-one connection with the characters.”

In promotion of his review, Kasanova notified his fans of his new upload through his personal Twitter page, tagging Chiplock, Zieja, and NIS America in a tweet containing his video, praising the actors’ work, and thanking the company for allowing him the opportunity to review the title.

Despite Kasanova’s overwhelmingly positive review, Chiplock soon took offense to being tagged in the aforementioned tweet.

He alleged that Kasanova “namedropped me on a public stream about Vic Mignogna while wildly exaggerating your version of our conversation, and directly caused my wife and I to be doxxed as a result, [then ignoring] my attempts to reach out to you to understand why.”

The voice actor claimed this dealt “a massive blow to the friendship I thought we had.”

Mekel, please untag me in this. You namedropped me on a public stream about Vic Mignogna while wildly exaggerating your version of our conversation, and directly caused my wife and I to be doxxed as a result. Then you ignored my attempts to reach out to you to understand why.

Several people close to me had to enact additional restrictions on their social media as a direct outcome of your actions, and it was a massive blow to the friendship I thought we had. I am still immensely confused about why you did that & why you never reached out to me first.

The ‘public stream’ mentioned by Chiplock refers to a January 22nd Rekieta Law stream which featured Kasanova as a guest.

During the stream, Kasanova recounted a incident wherein Chiplock cautioned Kasanova against publishing an interview conducted with former Dragon Ball Super: Broly voice actor Vic Mignogna due to the then-recent allegations of sexual misconduct against the voice actor [Time Stamp: 00:52:59]:

You can see a transcription below:

“Rekieta: So it’s Revali of Breath of the Wild, and what did he say to you?

Rekieta: That one that never actually materialized. It’s amazing.

Kasanova: So, he said that, and I’m like ‘Dude, I’m just doing an interview. It’s what I do.’ You don’t see people going at Joe Rogan for interviewing Alex Jones. You don’t get people going crazy over that, he interviews whoever. He said, ‘Yeah, you just need to realize that if you do this, you know, you’re making a statement.’ I’m like, ‘Dude, we’re just talking about music and Star Trek. Like I’m not even touching the drama.'”

Following this conversation between Rekieta and Kasanova, Chiplock was independently doxxed by members of the Kiwi Farms forum. At no time during the interview does Kasanova call for any action, direct or indirect, to be taken against Chiplock.

However, though Chiplock claims that Kasanova was “wildly exaggerating [his] version of our conversation,” chat logs provided by Kasanova to Bounding Into Comics show that Kasanova’s retelling was particularly accurate, even down to the detail that the only topics Kasanova mentioned regarding his interview with Mignogna were “music and Star Trek.” 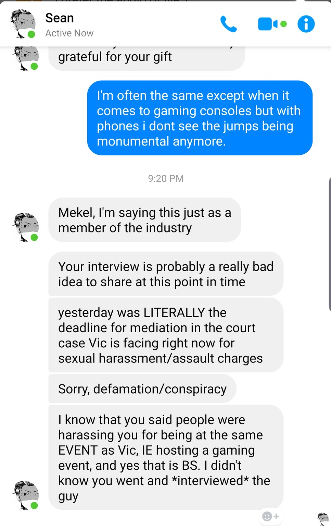 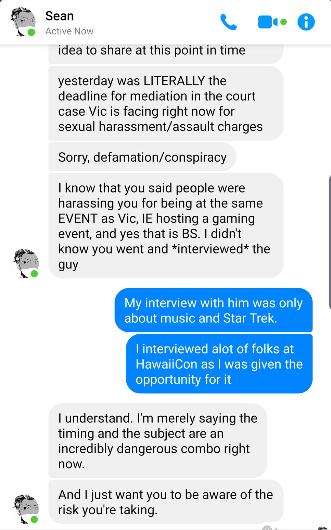 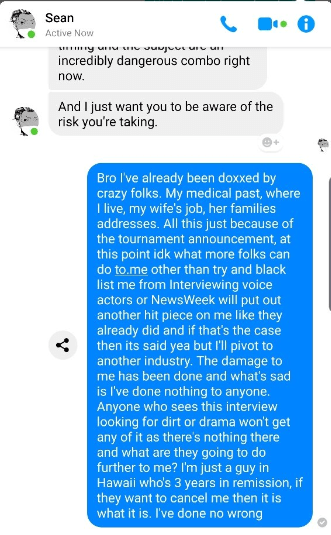 As Zieja and Atlus were also tagged in Kasanova’s tweet, Chiplock produced a screenshot showing himself to be blocked by Kasanova and attempted to warn them to “be careful with this individual.” 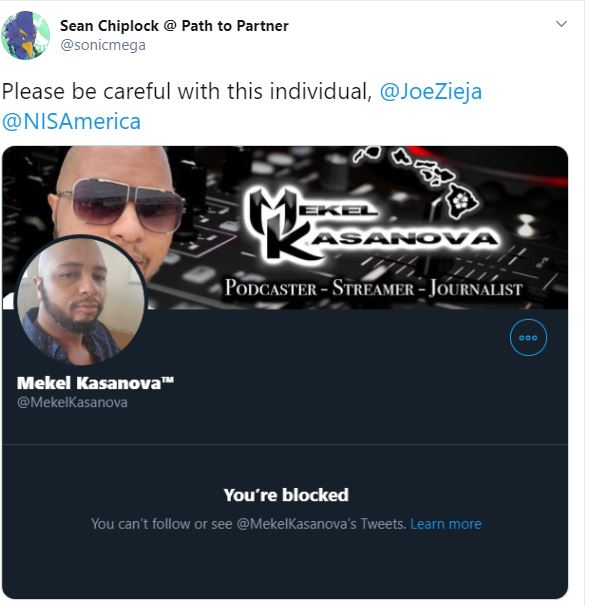 Speaking with Bounding Into Comics, Kasanova denied the veracity of the screenshot, stating that he “never even blocked him on Twitter and he’s claiming I did.”

In subsequent tweets concluding his warning, Chiplock stated that he had “NO idea why any of this is happening,” but also explicitly requested that his followers “DO NOT harass this individual or use the comment section to start a flame war.”

Well since he decided that was the best course of action, I’ll simply add: I had no reason to be upset with this person. He DONATED his “old” iPhone X to me in mid-2019 and it’s the one I still use to this day, an upgrade I sorely needed.

I have NO idea why any of this happened.

For those who need context, here is the new version of the (since deleted) Tweet.

DO NOT harass this individual or use the comment section to start a flame war. This is for reference only and I do not condone bullying.https://t.co/Mfjfds9igo

What do you make of Chiplock’s actions?